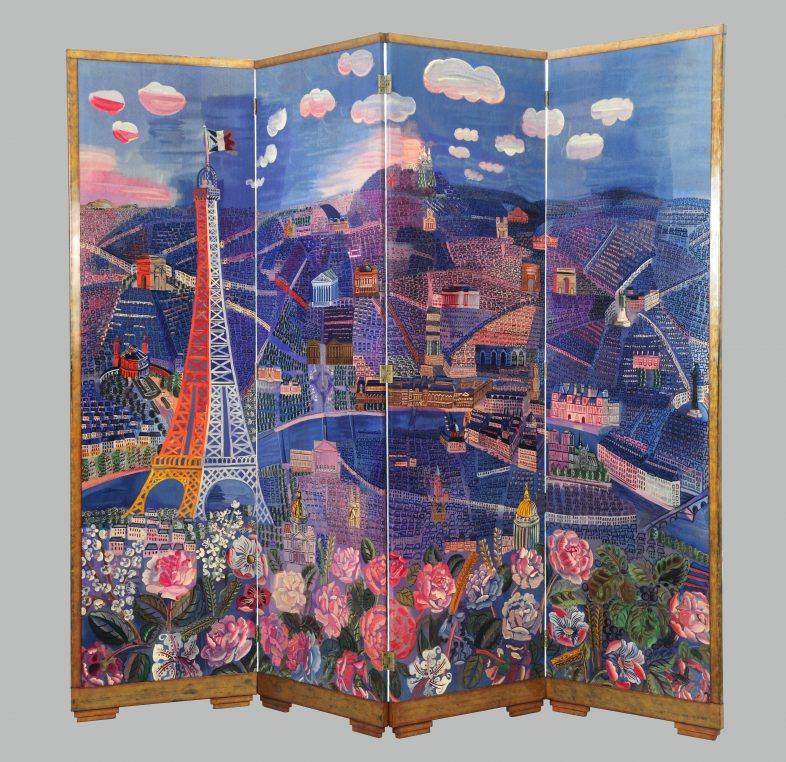 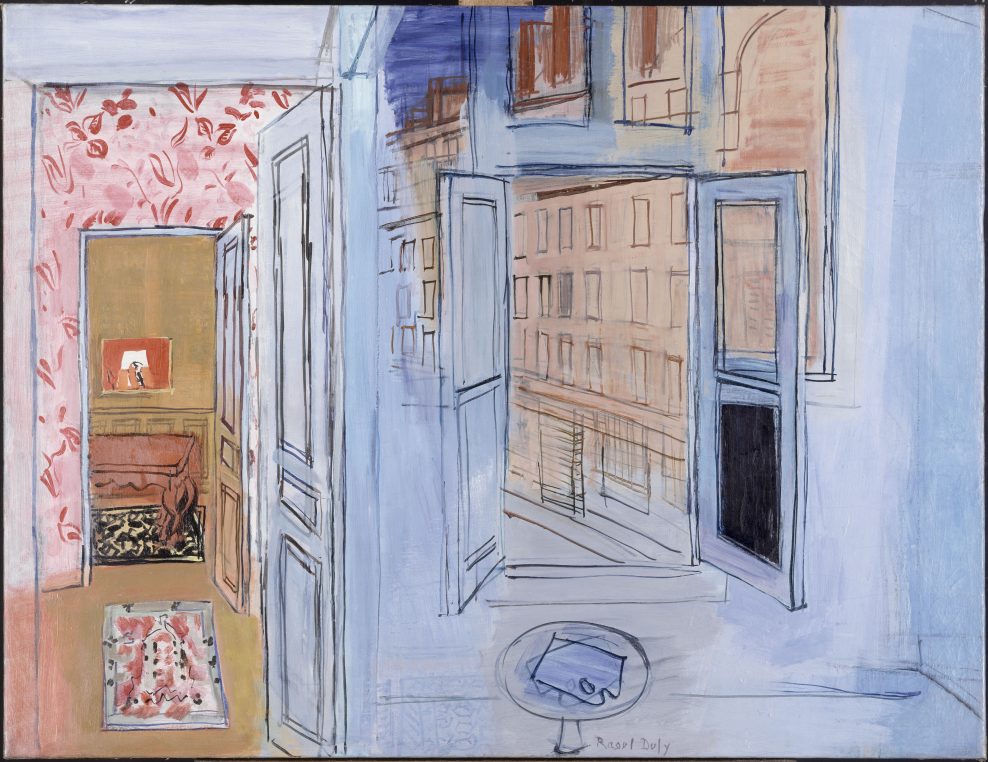 Musée de Montmartre is a charming small museum near the Basilica which always offers original themes of exhibitions. This time, Raoul Dufy(1877-1953) the colorful painter born in Le Havre in a family of 9 children, and well known for his numerous landscapes, scenes of regattas and racecourses and his passion for music inherited from his father, is the centre of attention in “Le Paris de Dufy”. It is amusing to notice that he worked at 12 rue Cortot  (the museum’s address today), where he shared a space with Othon Friesz. He studied with Léon Bonnat at Ecole des Beaux Arts, met the couturier Paul Poiret in 1908, and became a keen interior designer. And he was obsessed with the Eiffel Tower and diverse monuments of Paris. As the latest sale at Christie’s proved, his rating has never been higher. 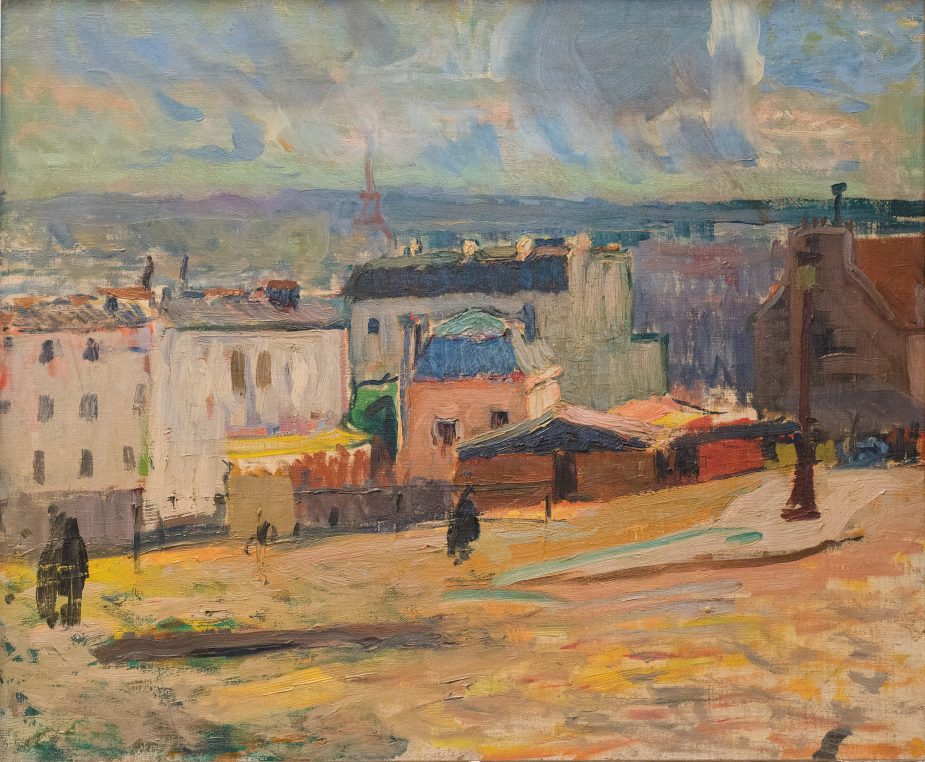 Once you have crossed the small garden of the museum you are already in another world of calm and serenity. It’s thanks to curator Didier Schulmann, formerly at Beaubourg, that the exhibition exists at all. He worked closely with Saskia Ooms from the Museum and Sophie Krebs from Musée d’Art Moderne de la Ville de Paris. They were lucky to benefit from a new discovery of photos from the 1920’s and documents found in his former studio of impasse Guelma. There are no Dufy at Musée Carnavalet, the historical museum of Paris (which is reopening very soon), and he was never celebrated by Parisians apparently. But he painted a lot of views of our city and of the suburbs. 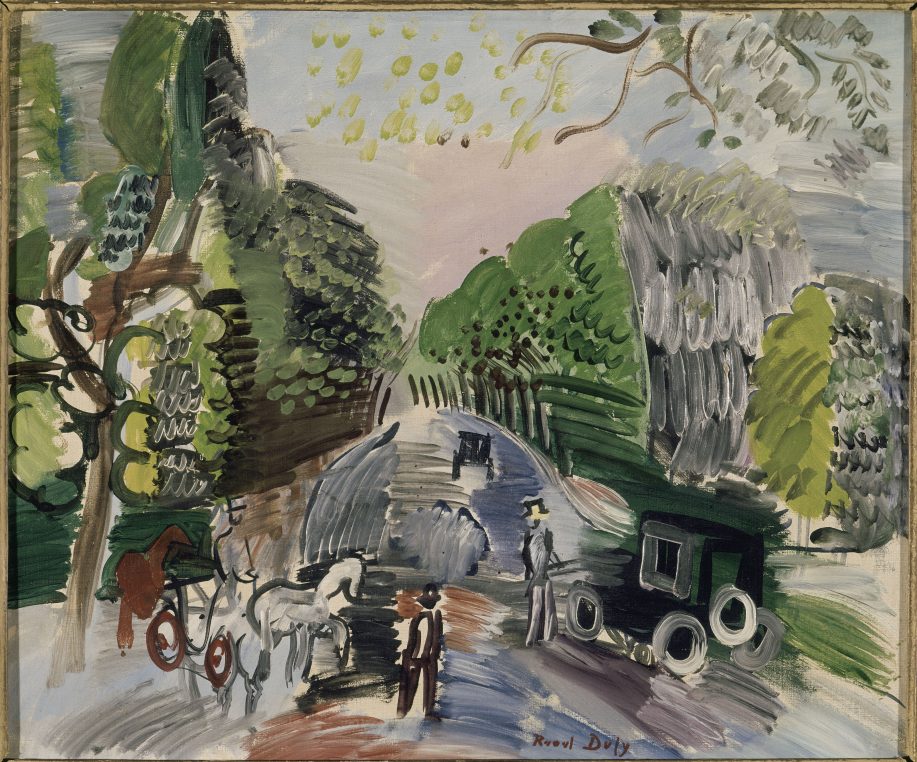 Music was an important part of his life and there is a very pretty painting from 1948, “Le Grand Concert” owned by Musée des Beaux Arts de Nice. Also a “Red violin” from the same year, lent by Centre Pompidou and a still life with violin, a tribute to Bach (1952) owned by Centre Pompidou. He also painted rue Séguier in 1909, and in this painting his bouquet is influenced by Picasso’s cubism. The church of Saint Germain des Prés appears in the background. “The Church of Saint Gervais” in 1902 (or 1904) owned by Musée Calvet in Avignon is another view of Paris with a rainbow, this time. His widow bequeathed a lot of paintings to the Museum in Nice who was very generous with its loans for the show. 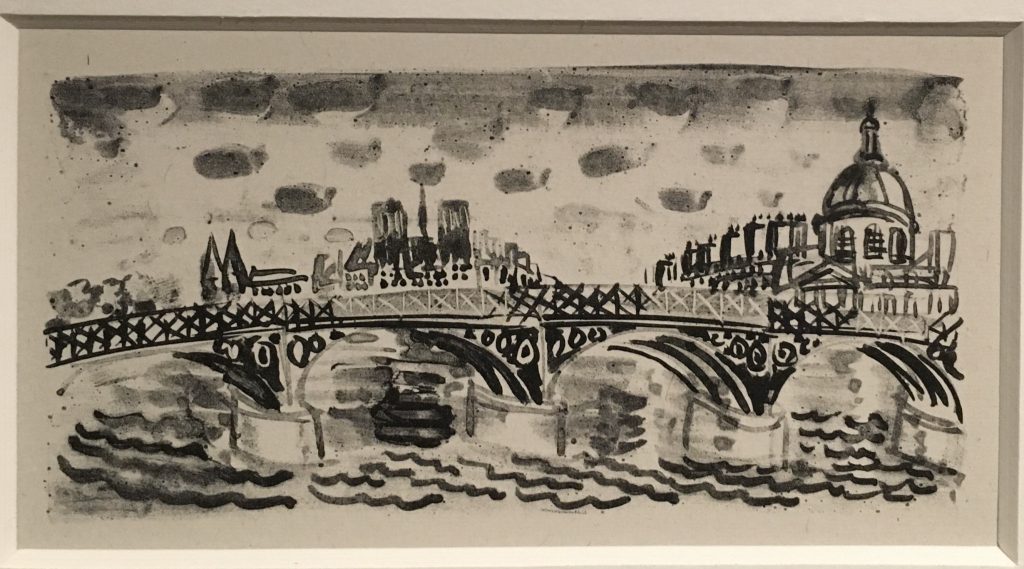 A room is devoted to his nudes and I did not particularly like them. But suddenly you arrive in the tapestry room with the fabulous pieces from Beauvais and a screen called “Panorama de Paris”. And there, his decorative genius stands out… He was also keen on going to the suburbs on the Marne, and painting the boating scenes or the alleys of Bois de Boulogne, the luxurious vegetation and the flowing water which he loved. His lavish greens are very attractive. 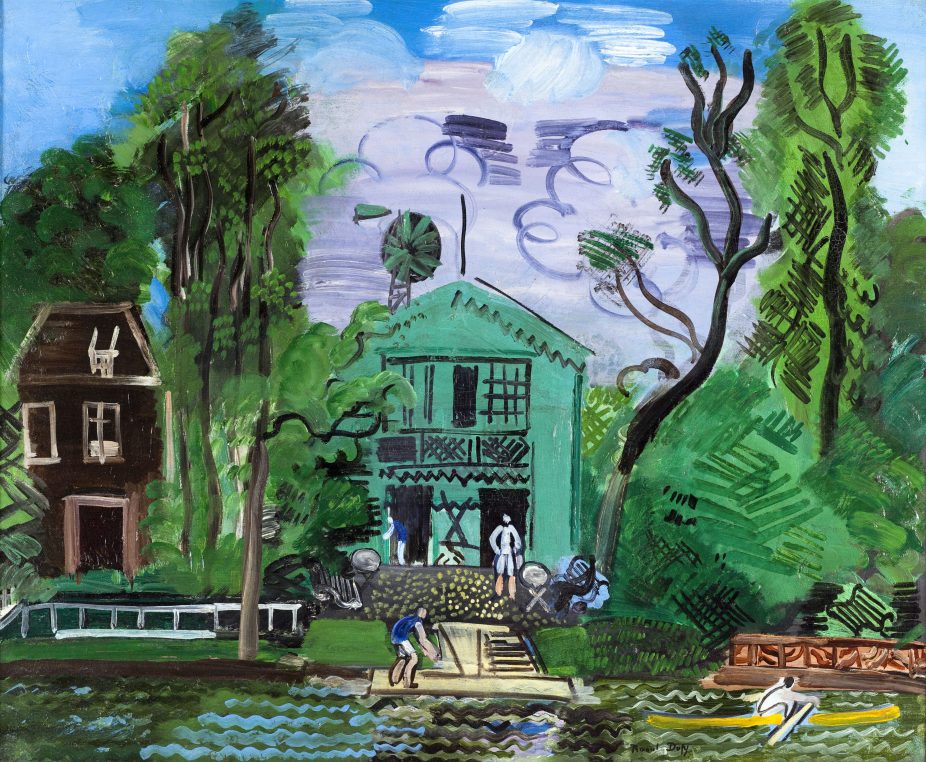 In 1908, he starts designing for Paul Poiret, the couturier who is at the height of his fame. Fabrics and dresses, but also calendars and advertising posters. His first fabric is created by Atuyer-Bianchini-Ferrier in 1910. He will also work on more tapestries of Paris, paint decorative scenes like the funeral of Prime Minister Paul Painlevé in 1933 at the Panthéon. He is well introduced and his talent is very versatile. 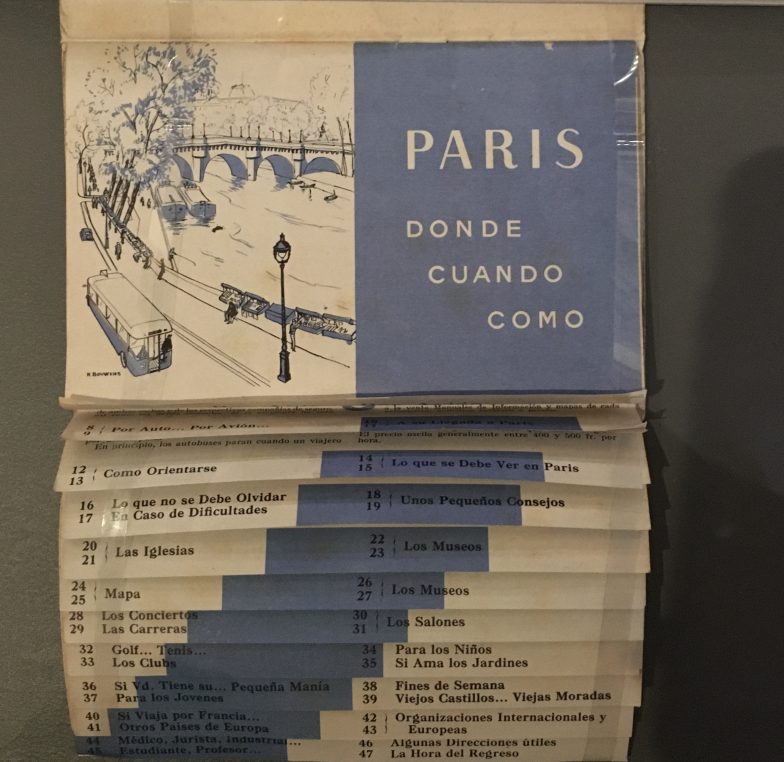 He illustrated the guides of Paris in different languages produced by his lover, photographer Thérèse Bonney

“La Fée Electricité”, the large fresco in 250 panels,  exhibited at Musée d’Art Moderne de la Ville de Paris since 1964, is his masterpiece: this painting is still today the largest painting in the world, and is represented here by ten large lithographs. Commissioned by the Compagnie Parisienne de distribution d’Electricité, it was painted in four months for the Pavilion of Light  at the 1937 Exposition Internationale. It symbolizes the union of nature and technique and represents Gods from the mythology and the 110 scientists who took part in the discovery of electricity over the centuries. 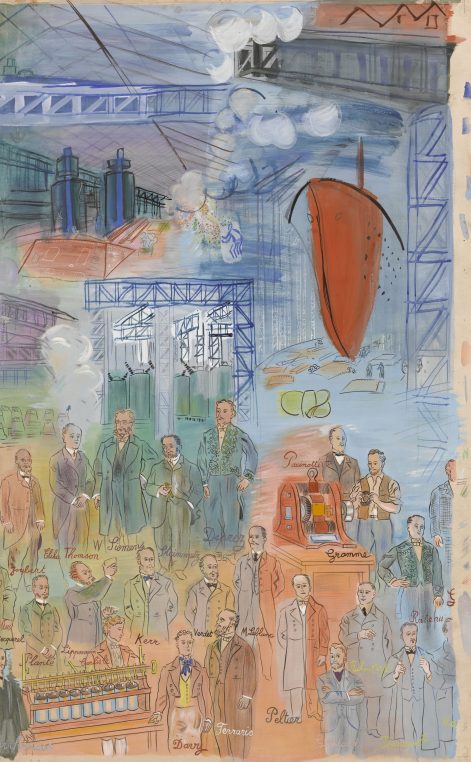 There are two large portraits of his wife in 1908 and in 1930 and at the end of the exhibition, two tapestries of Paris (1934-35 and 1937) are shown together for the first time. They were commissioned by Marie Cuttoli,  a famous promoter and  collector of modern tapestry and one of them was bought (thanks to her) by Albert C. Barnes for his collection. Both are now at Centre Pompidou. An exhibtion celebrating her taste and talent took place last year at the Barnes foundation in Philadelphia. 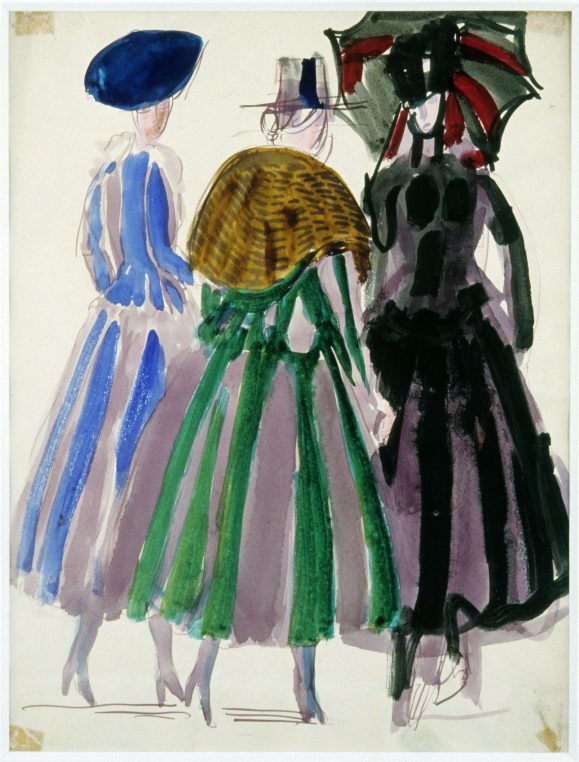 Museums are reopening on May 19, so you have to rush and see this charming show. The garden overlooking the whole of Montmartre is a delight and the walk down from the basilica is also pleasant. Musée de Montmartre until September. The excellent bilingual catalog is already available.