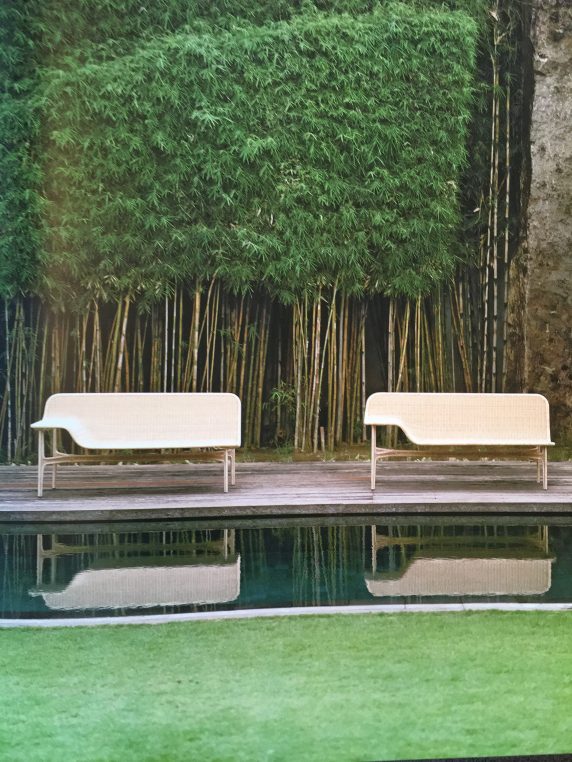 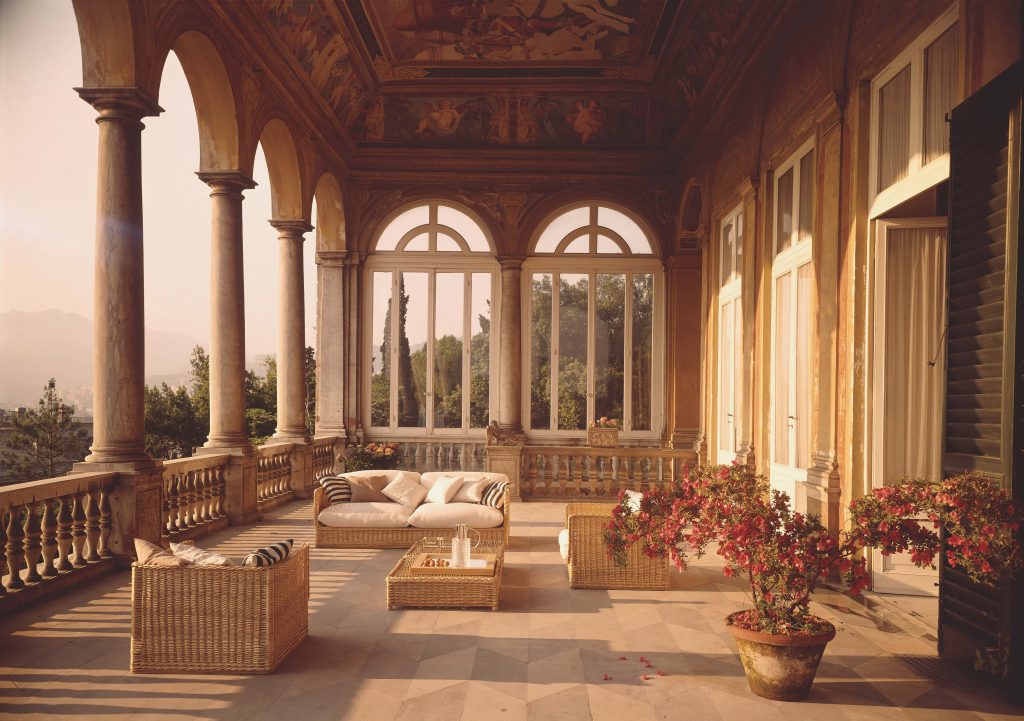 Rattan (rotin in French) has a double quality: it was always used in royal and grand colonial decors and is therefore very chic, and it is handmade by craftsmen of what the French call “Les Métiers d’Art”, so very much in fashion at the moment. It is therefore not a coïncidence if Lulu Lytle, author of the book published by Rizzoli, invited Prince Charles to visit the workshops in Leicestershire where her company, Soane Britain, has developed rattan weaving in Thurmaston. From Windsor castle in 1946 to Princesse Caroline of Monaco photographed by Slim Aarons in 1981, we can dream about new decors and lifestyles in this very clever album. 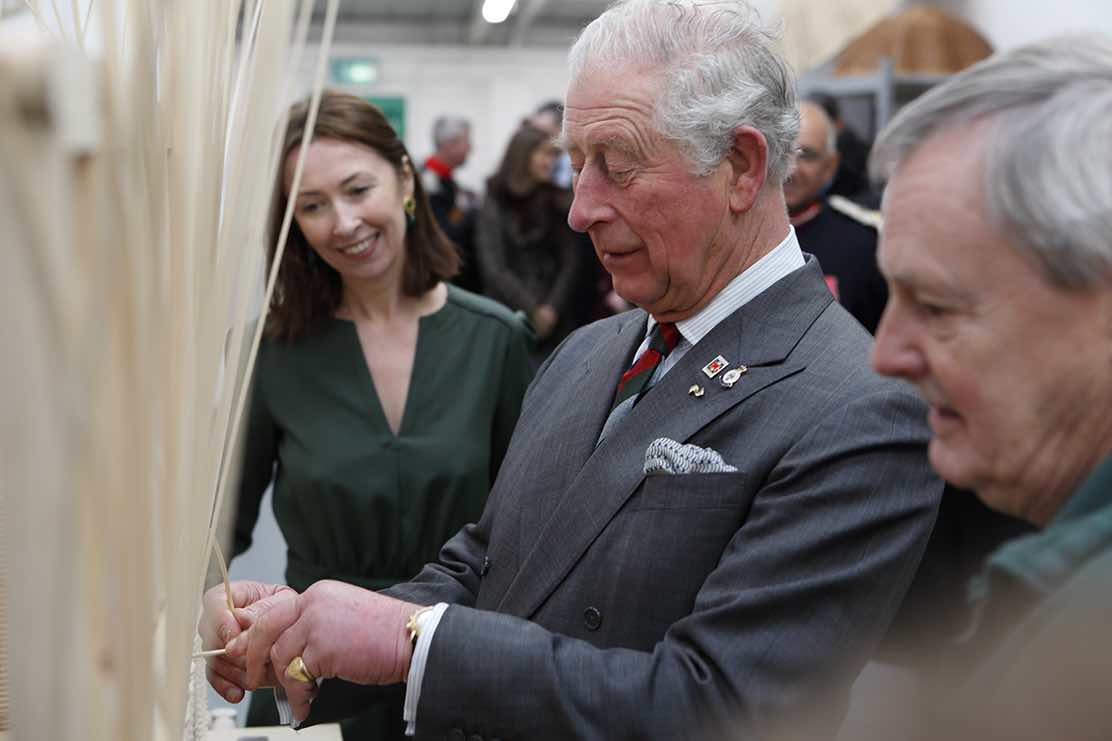 If she worked in France, she would be awarded the Prize of Intelligence de la Main by Françoise Bettencourt whose mother founded this unique award for craftsmanship. For the last twenty years Lulu Lytle has been running around Great Britain, looking for the best upholsterers and saddlers, weavers and printers whose products she sells in her shop, Soane Britain in Pimlico. The dexterity of the hand is her motto. So now she shares her experience of rattan in a beautifully illustrated 223 page book. 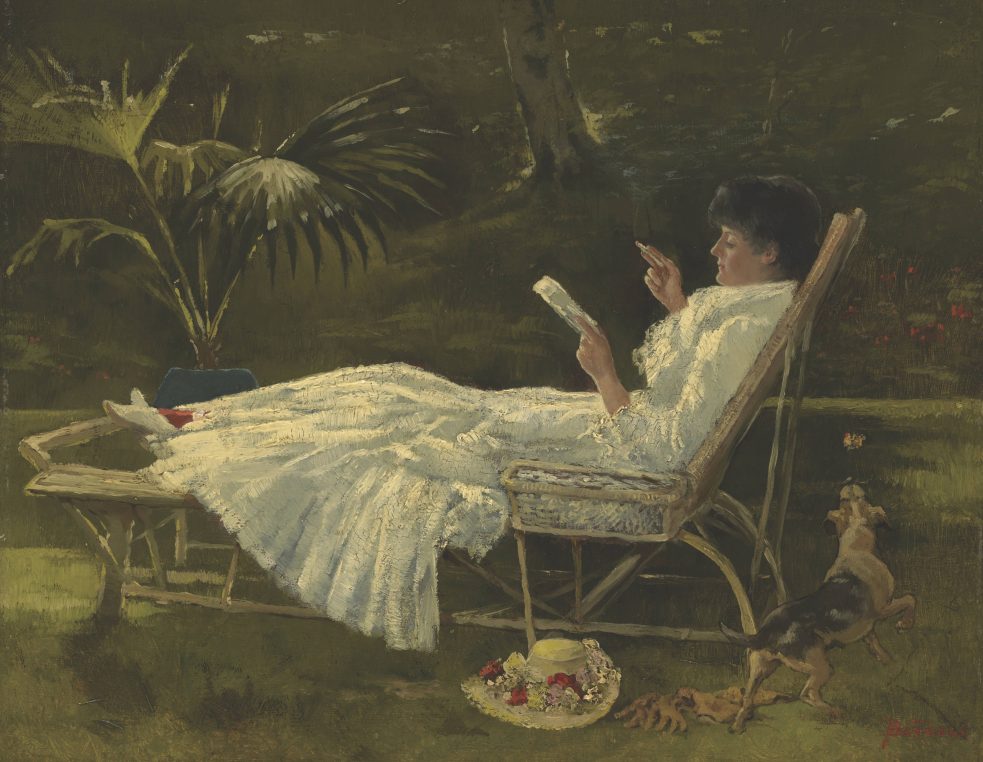 Lulu Lytle has been in awe of wicker chairs since childhood when she saw a portrait of her grandfather painted in Cape Town. She then discovered furniture made in date palm in Egyptian cafés, a country where rattan is known since 2 600 bc and where Tutankhamen was buried with a brightly colored stool and headboard.  She started collecting old daybeds, chairs, baskets. When she acquired an old Edwardian rattan sofa and wanted to provide its modern version for Soane, she was determined that it should be made in Britain. The search was arduous since almost all wicker furniture is imported from Asia. But she finally located the unique Angraves workshop in Leicestershire which had acquired Dryad’s archives after it closed its rattan activity, in 1956. There are now 15 workers including a family of three generations working for her. 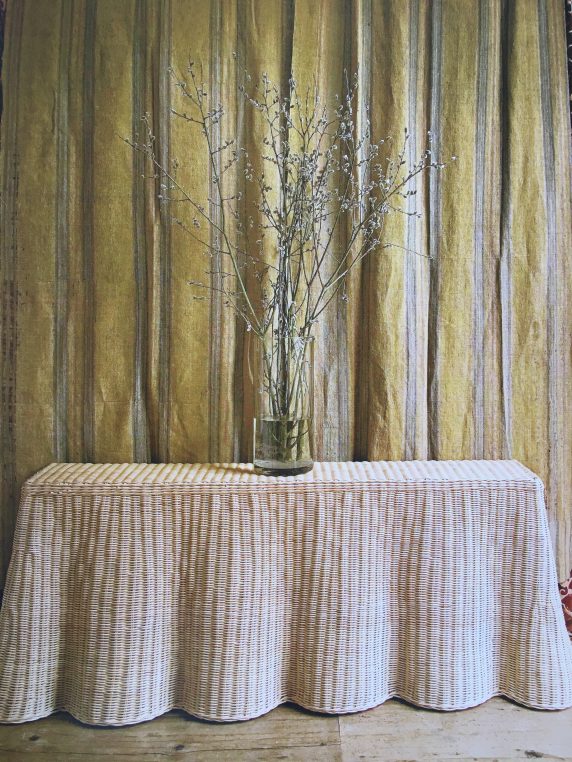 Taste makers Bunny Mellon and Marella Agnelli both understood the importance of rattan and one discovers through the pages how chic it has always been.”Unlike bamboo, rattan is a vine” writes Lulu Lytle, “it is so fast growing (up tot 20 feet per year, up to 600 feet in a lifetime), it is strong, durable and versatile… It lends itself to almost any stylistic interpretation”. The name derives from the Malay “rotan”. The colons were the first to appreciate its qualities of resistance to extreme heat and humidity, lightness, and its open weave which allows cooling air to circulate. While design possibilities are endless, rattan is also used in bone replacement surgery. A wicker basket was discovered in Pompeii in 2000, wicker floor mats feature in Iron Age roundhouses. It grows today in Australasia, Malaysia, Indonesia and the Philippines in India and Southeast Asia. 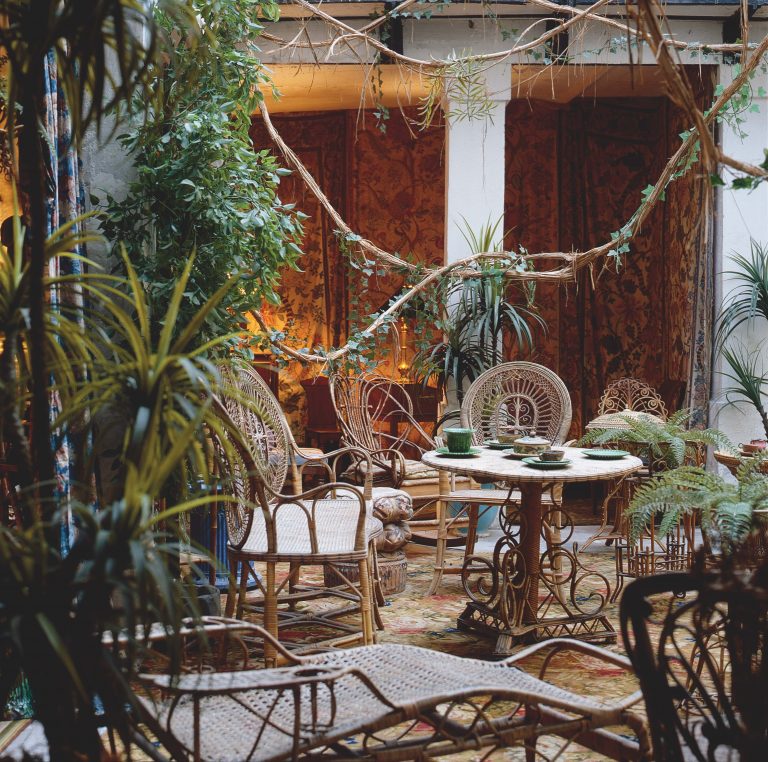 What I particularly appreciate in this book is the cool attitude to life that rattan furniture encourages. If you think of it, rattan is used mostly for reclining chairs, terrace furniture, life in the open and in the summer months when everything is easier and more relaxed. Sanatoriums always feature rattan armchairs, the erotic film “Emmanuelle” in France was famous for its rattan love chair. It is a sensuous material and shapes are usually round and romantic. They are reminiscent of Provence, Tuscany, Cape Cod or California. There is a modesty about rattan, a cheap material which the rich love to include in their expensive decors like Bunny Mellon at the White House Rose Garden for the Kennedys. Colonial American white rattan style is the epitomy of happiness even when it is copied by PierImport. 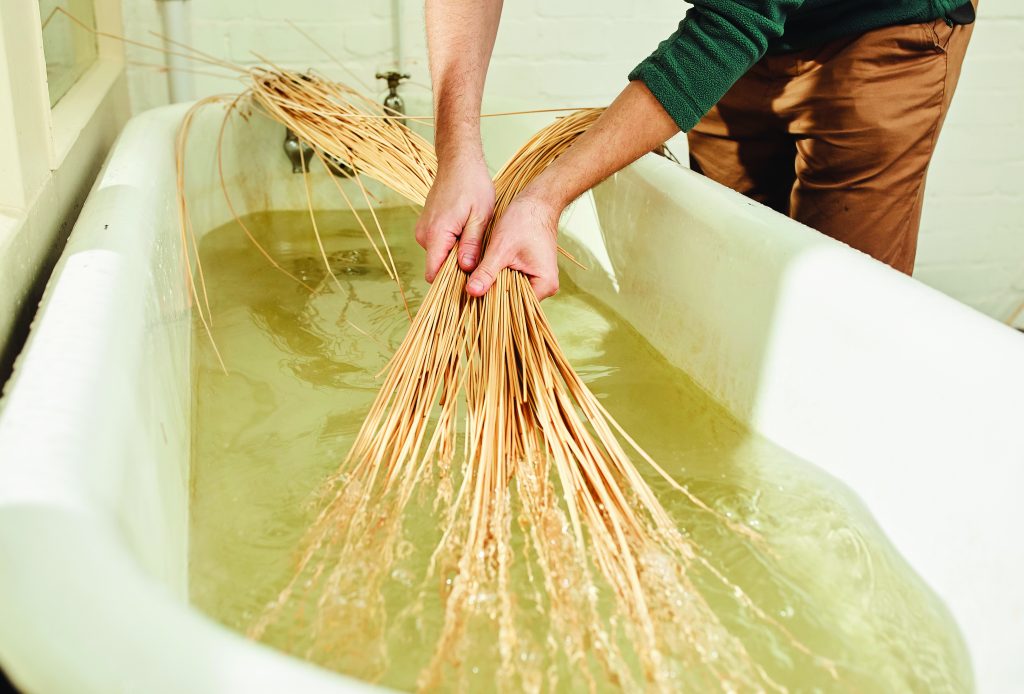 The book also describes in detail the techniques of rattan craftsmanship

Lulu Lytle’s book is likewise a moment of relaxation and happiness where James Tissot’s “The convalescent” features next to a modern artist studio decorated by Soane Britain in Dallas. I have a weakness for the contemporary pool benches by Hiroomi Tahara  and an armchair by  Isamu Kenmochi both made for the Indonesian company Yamakawa. Others will like Jean Royère’s or Marcel Breuer’s chairs. One thing is certain, this book “Rattan, A world of elegance and charm” will enchant your evenings this winter for 65$. It is published by Rizzoli and can be ordered from Galignani in Paris. 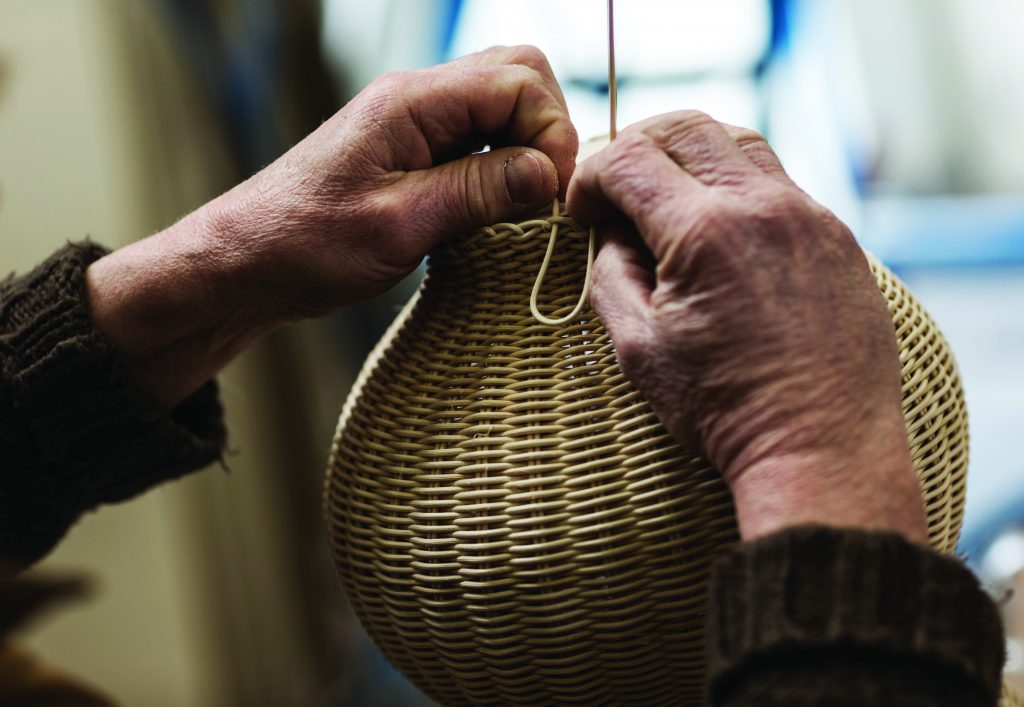 One Comment on “Rattan is the new chic, by Lulu Lytle”