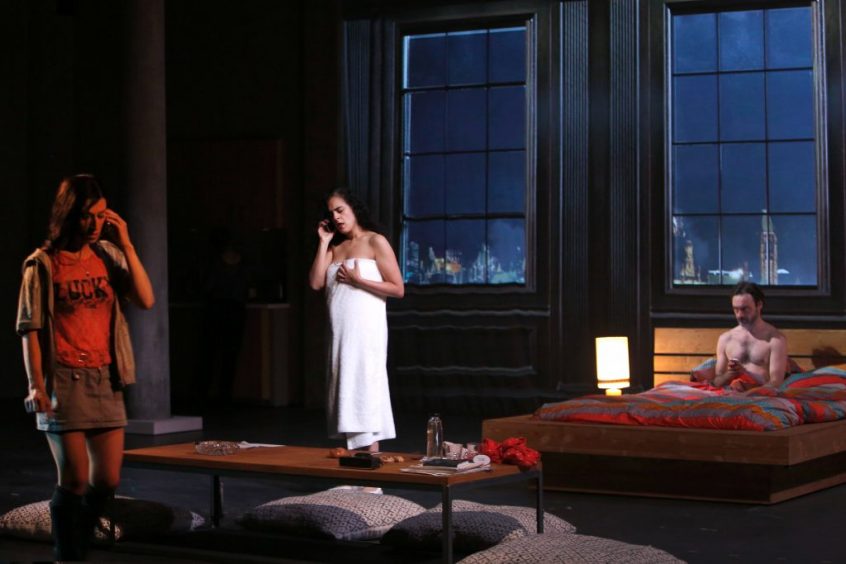 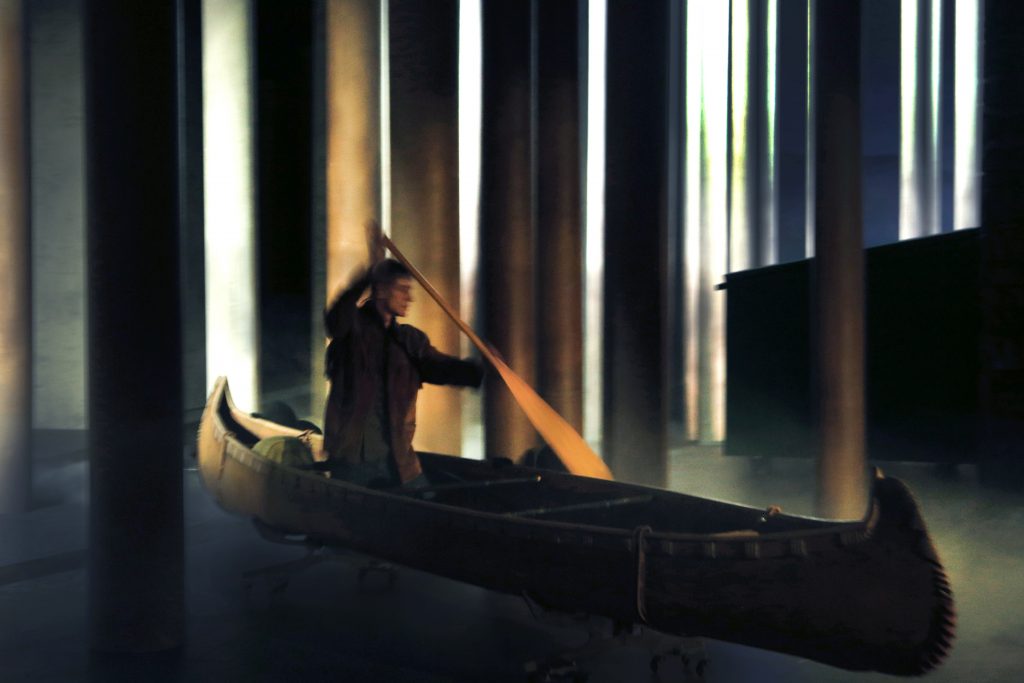 A romantic scene in a canoe for Martial Jacques, photo Michèle Laurent

Robert Lepage’s new show, Kanata, was announced last summer as having been canceled in Canada. The reason? “First Nations peoples” demonstrated against the fact that their parts in the play were not acted by their people. A very sensitive political issue. Thus Ariane Mnouchkine the famous founder of Théâtre du Soleil, decided to take the project in hand and develop it with Robert Lepage and her own company in Vincennes. The actors went to Canada to immerse themselves in situ in the Rockies, in Alberta and in Vancouver where Hastings Street has a major role in the play. The thirty two International actors are exceptional as is the set. 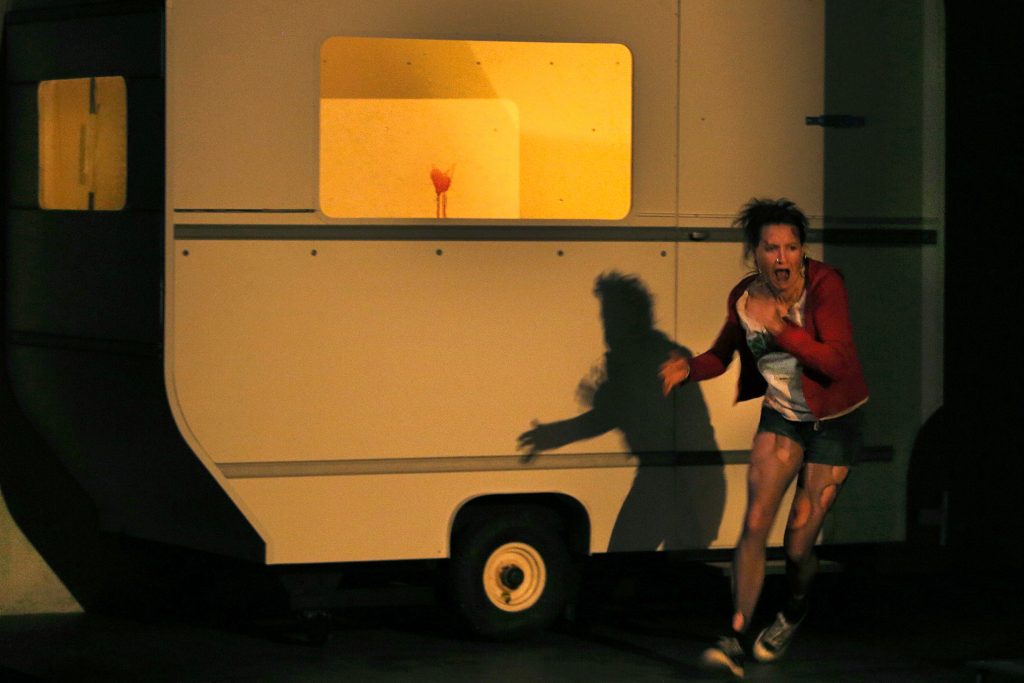 Born in Quebec in 1957, Robert Lepage has trained in Paris, managed the National center for the Arts in Ottawa and founded his own company, Ex Machina. A true star in France, he has directed many operas and plays. In “Kanata”, the Iroquois word for “settlement or village” which gave its name to Canada, he proves his professionalism and gives a clear message on the country today, its Chinese and Iranian immigrants, mostly on the reminiscences of how “native Americans” were treated in the 20 th century. 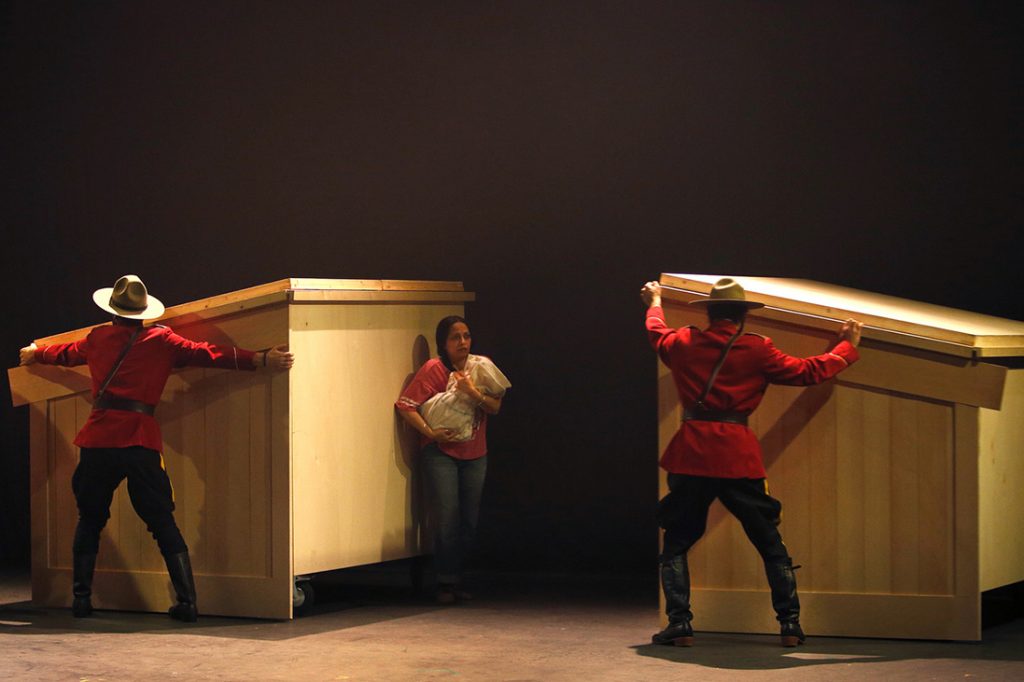 The play was meant to be in three parts. A historical part on the Hurons in the XIX th century, a second one on the boarding schools where children of First Nations Peoples (as Canadian native Americans are referred to) were sent by force to assimilate until the 1990’s, and the third one on Hastings Street, in Vancouver, where these children end up shooting themselves to death. The street was named after George Fowler Hastings, a Navy officer during the first Opium war in the Pacific, and Robert Lepage creates a subtle link between the British Royal Navy officer, drugs and the Chinese immigration to Vancouver. 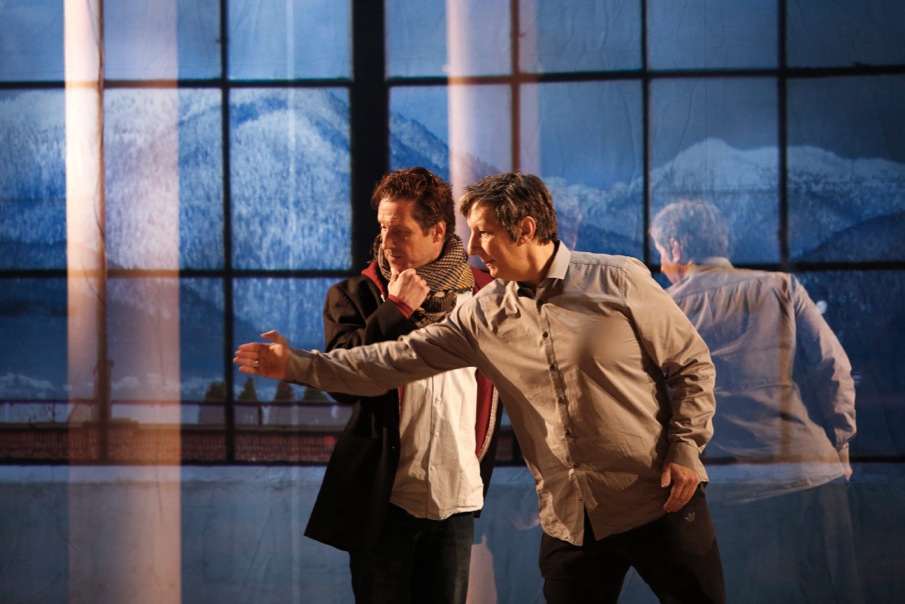 It is now just one chapter which describes, in two and a half hours, the situation in Vancouver. It is extremely funny at times, extremely dark and terrifying most of the time. The lives of the girls which end up as prostitutes, because their identity has been stolen from them, are tragic and yet they form a new family of misfits on the street. A gay cameraman, who is filming them, falls for the young French (lady) painter who befriends them and starts making their portraits. The social workers from the shooting center are key characters as the police officer who can’t be bothered.

The psychology is fascinating as are the decors. And the theme of integrating the First Nations peoples in Canadian society is omnipresent, whether at a flirtatious dinner in Ottawa or in the police headquarters in Vancouver. 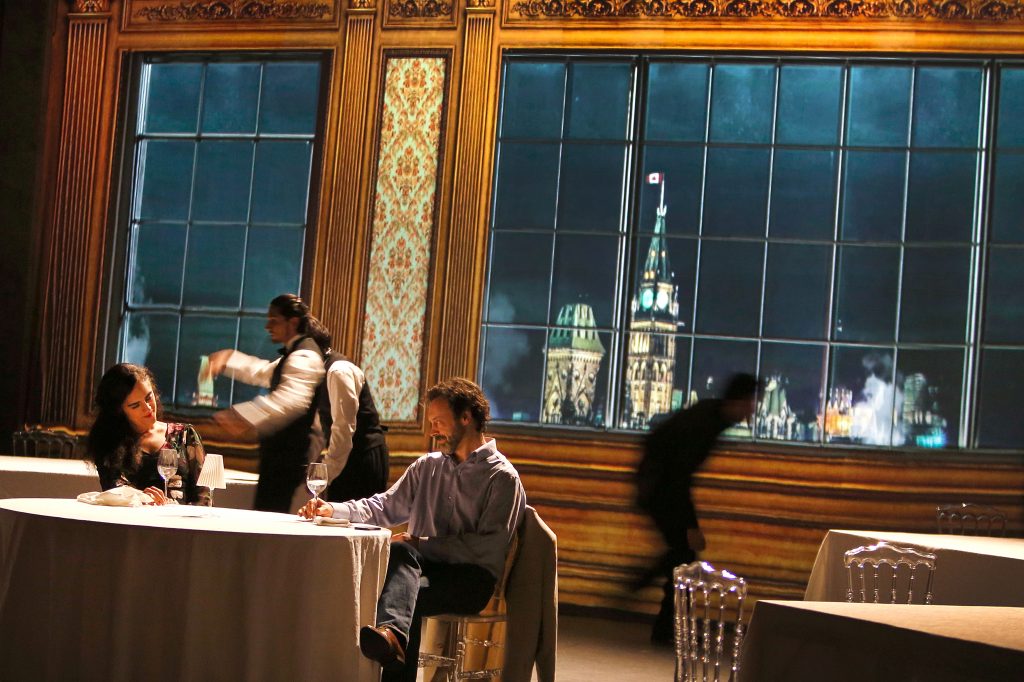 The Canadian sense of humor is so different from ours that it was refreshing to attend the show with two Canadian friends who could explain the serial killer who bred pigs episode and laughed out heartily at the French aspiring actor who never caught the right accent. But also at the Chinese landlady who bitterly negotiated the rent. 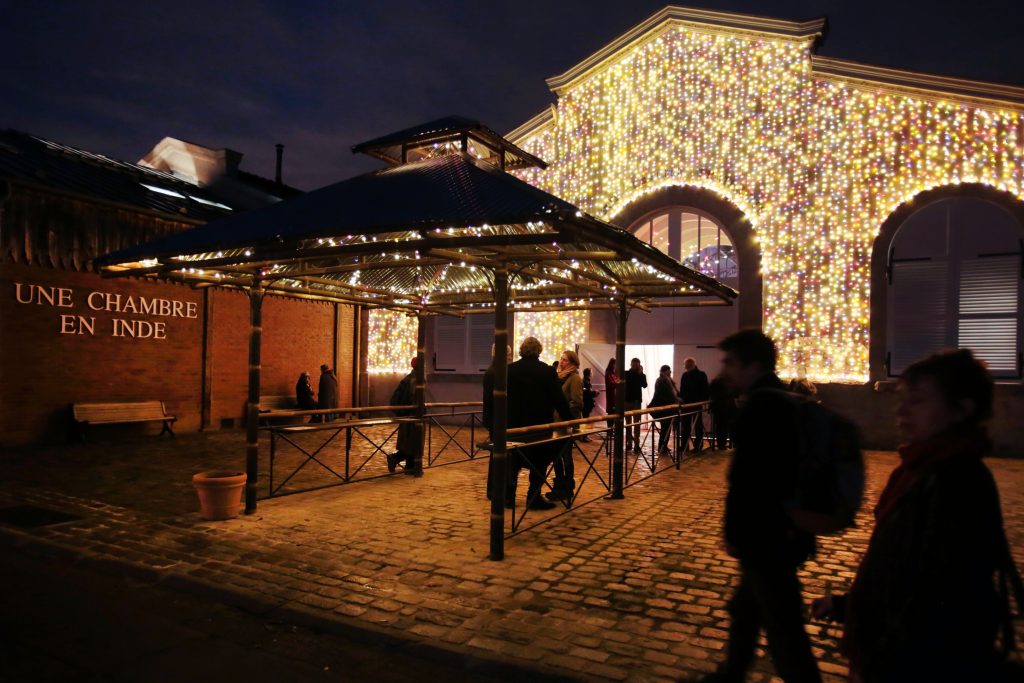 Théâtre du Soleil at night is a very festive place

The atmosphere at Théâtre du Soleil is unique and sharing a spinach pie with the actors (including the terrifying serial killer) afterwards was one of the rewards of having been tense for two hours.  The aesthetics of the play are amazing and one learns a lot about Canadian society. And Robert Lepage’s talent added to Ariane Mnouchkine’s fearlessness is a winner. 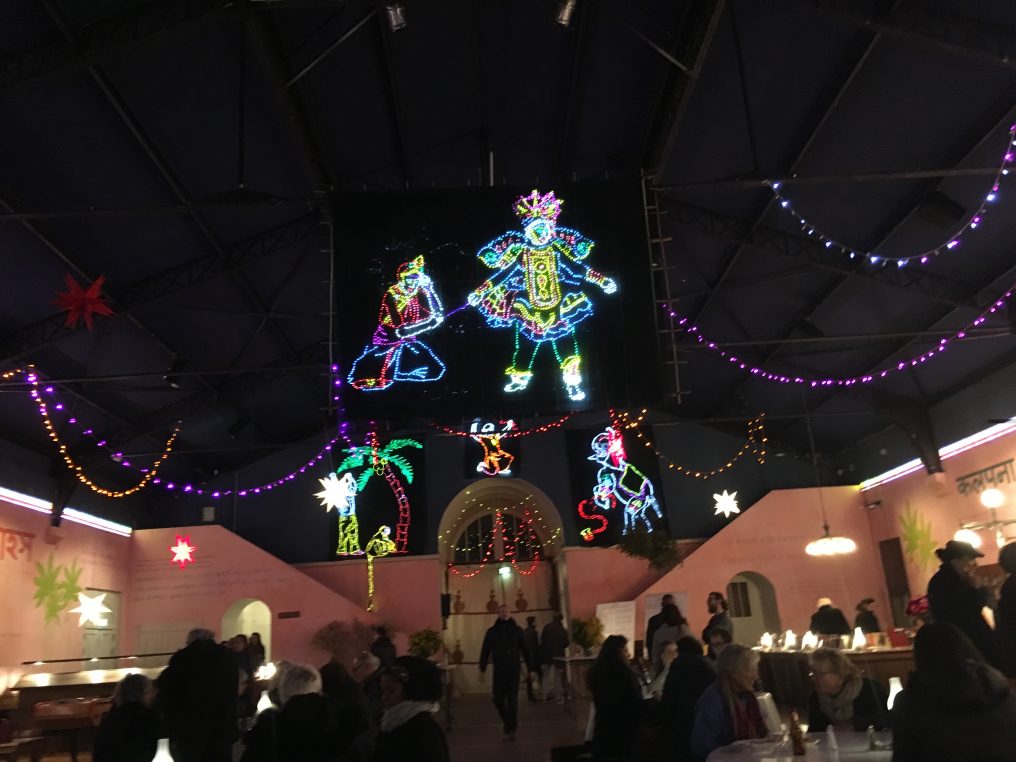 Dinner afterwards with the actors is relaxed