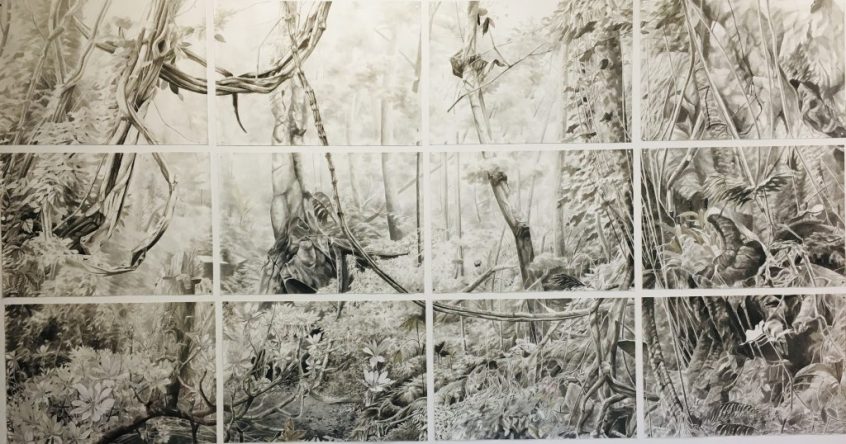 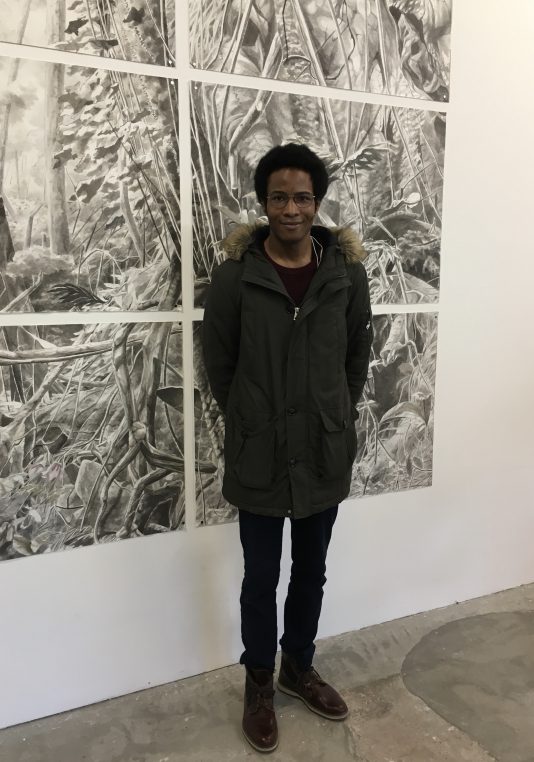 Ludovic Nino, a graduate of Ecole des Beaux Arts in front of “A chimeric instant” a large ink drawing at Galerie Jeune Création

I am sure that very few of you have heard of Romainville, a town of 28 000 inhabitants just north of Pantin. Its castle used to belong to Maréchal de Ségur in 1723 when only 400 people lived there. It is now, after thirty years of communist and socialist management, an upcoming capital of contemporary art with soon six galleries which have emigrated from Paris. It is the seat of Fondation Fiminco which rehabilitated the former Roussel Uclaf labs, it holds the reserves of FRAC Ile de France which will open February 6, and Parsons School of Design since 2019. Air de Paris, In Situ-Fabienne Leclerc, Galerie Sator and Galerie Jocelyn Wolff were having an opening last Sunday and there was an ambiance of resurrection under the blue sky and beautiful sun. Some of the shows were pretty mediocre but I fell for two artists, Chilean painter Santiago de Paoli at Wolff and a young Martinican graduate from Ecole des Beaux Arts, Ludovic Nino. 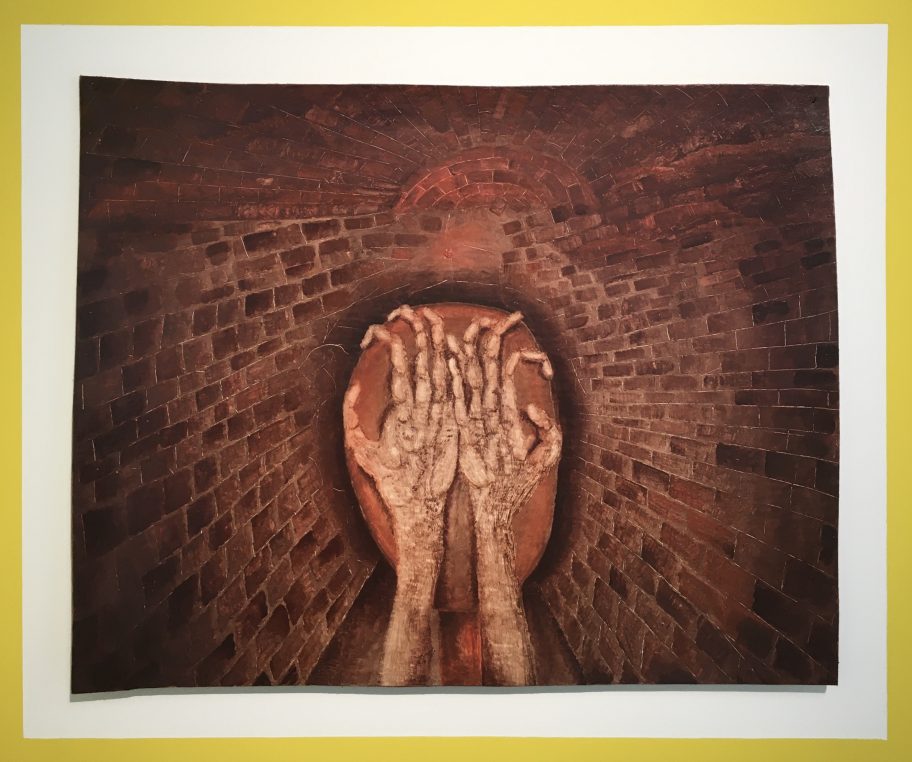 Born in Buenos Aires in 1978, Santiago de Paoli has been recently travelling all around Europe and these paintings on felt, paper, cardboard and linen reflect his discoveries of Western art. Some of the works might seem naive while others are incredibly dramatic. The medium of felt which he uses a lot (it is light and easy to carry around when travelling) is intriguing and he uses oil for each one of his works. 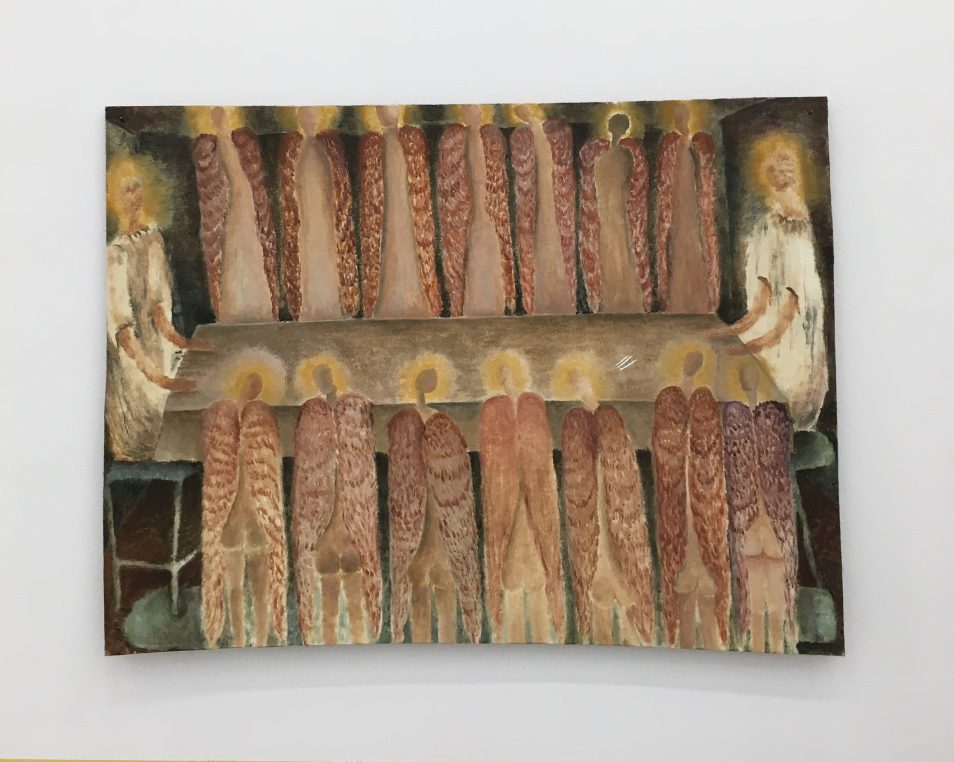 The brushstrokes are very subtle and agile and the dark colors appealing. It is his second exhibition with Jocelyn Wolff who also represents established artists like German sculptor Harald Klingelhöller who was first exhibited with Thomas Schütte and Reinhard Mucha in Bern by Jean Hubert Martin in 1983. In the offices upstairs, where a delicious brunch was being served we discovered a very interesting box in copper by Klingelhöller. 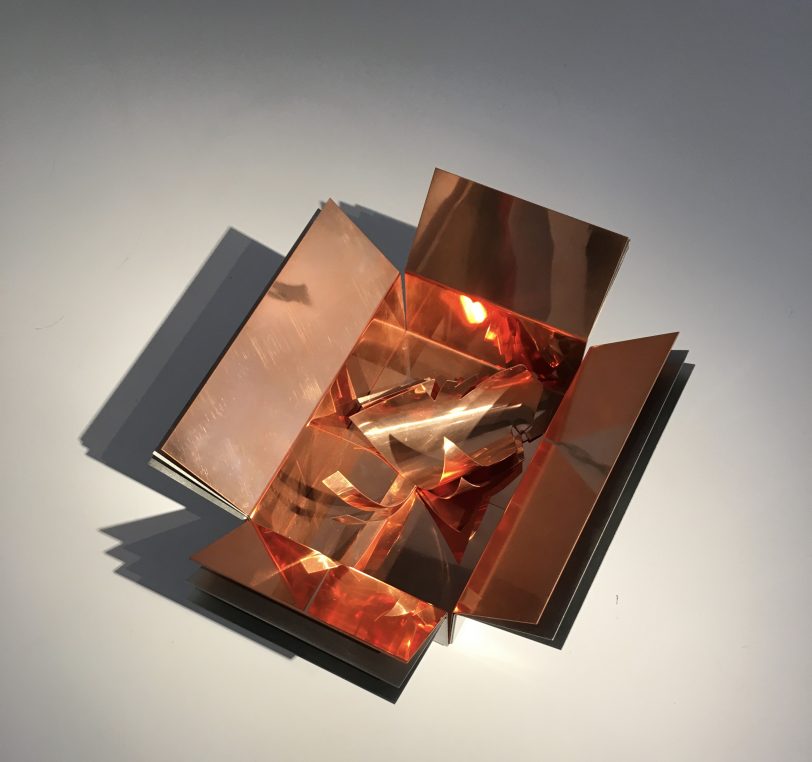 At galerie Sator next door, Gabriel Leger, who fantasizes about archeology, is showing on two large walls, two amulets from ancient Egypt which he has demultiplied thanks to two original molds of a scarab and a falcon face. The name of the project is “Deep time” which means geological time, a philosophical concept invented at the end of the 18 th century. He used the same Egyptian blue earth as was used in the antiquity. The amulets can be seen also individually on a gold disk. 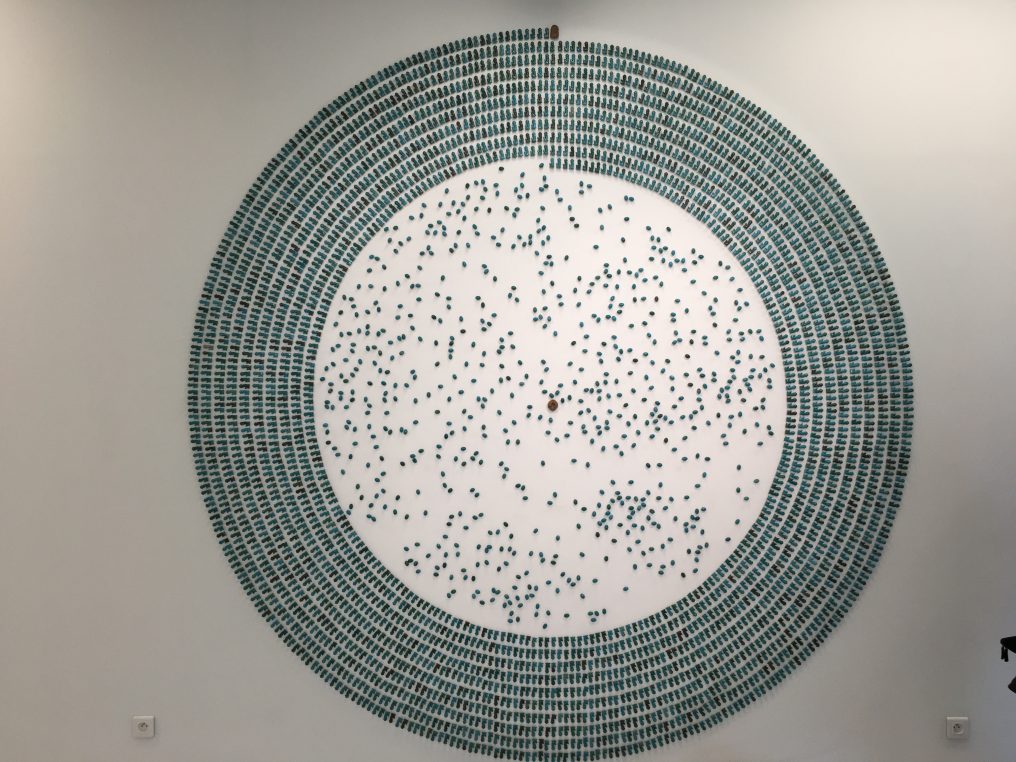 Gabriel Leger, “Deep time”, 2020 (the mold is at the center with scarabs around it and falcon heads on the outside ring)

And a series of forty black sandstone bier bottles on a white wall are just as efficient decoratively. Bier was very popular in Egypt and these bottles contain a bier which was made with old wheat, spices and Egyptian honey. “Ev Tò TTan” One is all, is the title of the piece. 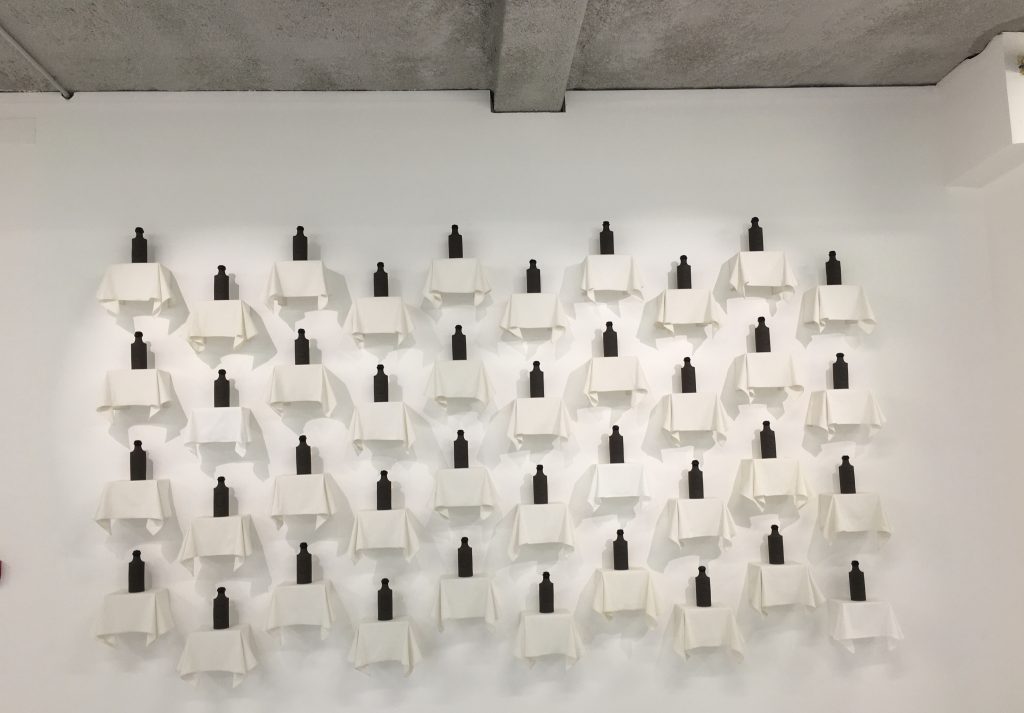 At the last minute and in the last gallery devoted to young artists, I ran into Ludovic Nino, a thirty year old graduate from Ecole des Beaux Arts. He creates monumental drawings or tiny precious ones in ink.  The fresco presented here is based on l’Anse Couleuvre, a bay with wild tropical vegetation in Martinique, where he goes on vacation. He has exhibited at la Ferronnerie last January 2020 and works on the Memory of slaves and African inheritance, but is influenced by the East where he trained in Japan in 2017, and  learned the technique of ink painting on Korean paper. He is inspired by poets like Aimé Césaire, and is part here of a group show on the theme of mangroves, “But the world is a mangrovity” to which he added fig trees. 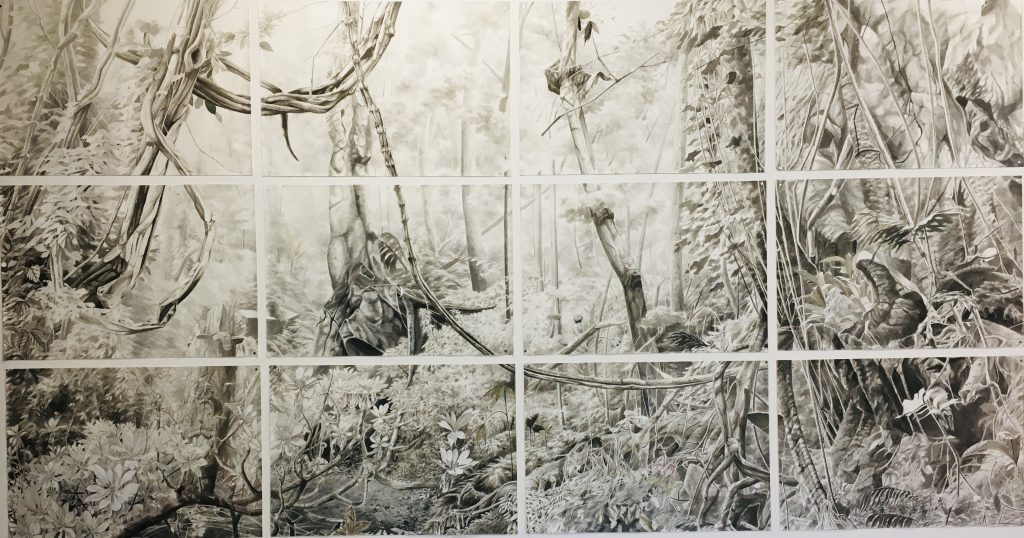 Ludovic Nino, “Chimeric Instant” is inspired by l’Anse Couleuvre, in the North of Martinique where his family is from

It is so much fun to discover a new project like this group of contemporary galleries in Romainville. The 1940 architectural site rehabilitated by Fiminco and the Freaks agency, houses 18 artists in residence and organises exhibitions. The 11 000 square meters and five buildings will be completed by an industrial hall renovated by Jean Michel Wilmotte and RRC architects. A theater of 600 seats, film studios, and artists spaces will enable all artists to work together. 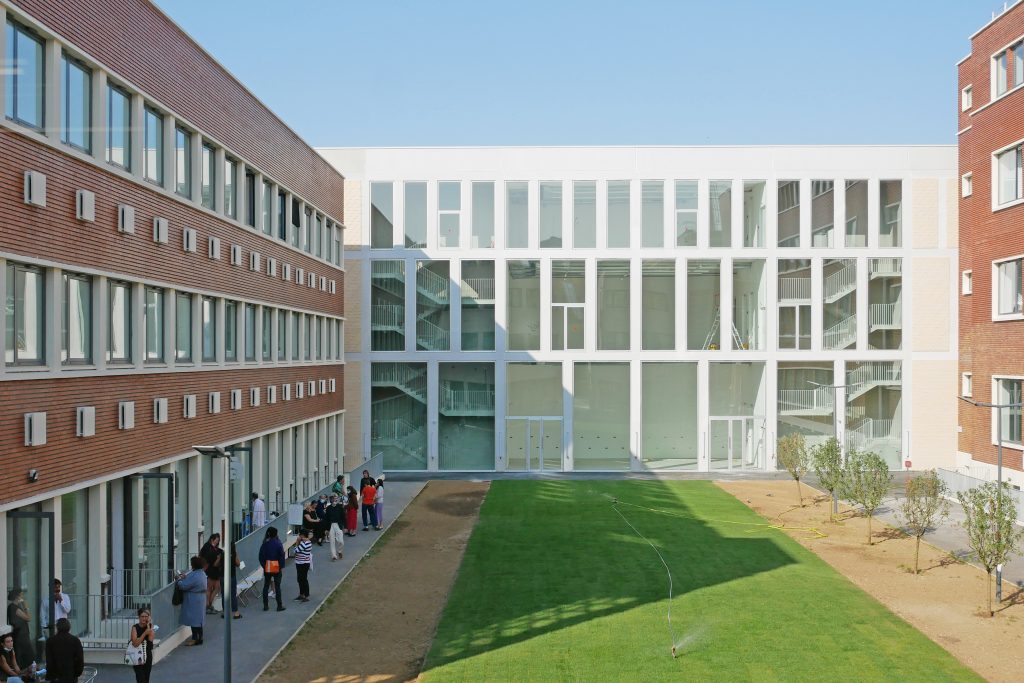 Left, the galleries and center, the FRAC Ile de France reserves in Romainville