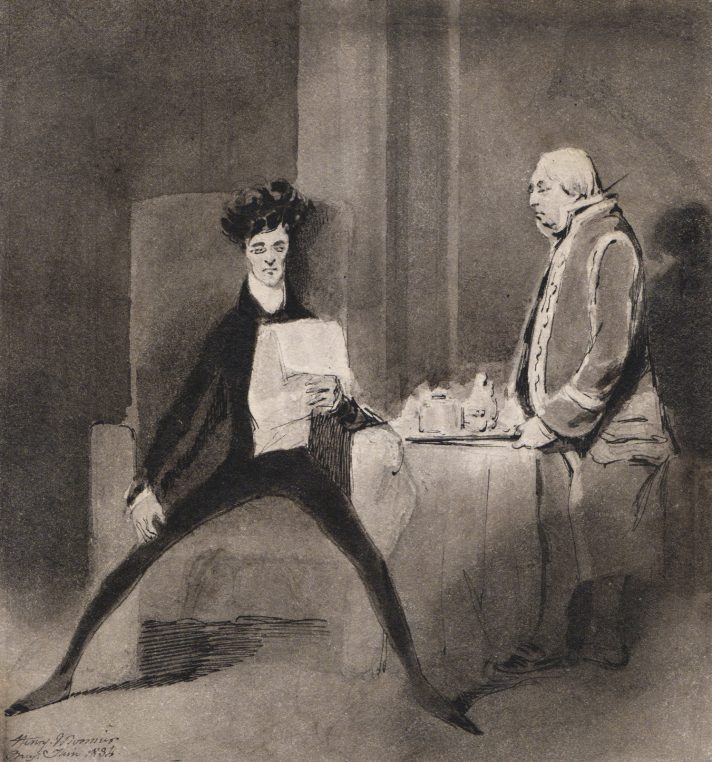 Just when Musée de la Vie romantique is opening a new (dreary) exhibition “Héroïnes Romantiques” (Romantic heroines until September 4), we learn that Musée des Beaux Arts d’Orléans has acquired at auction in Munich, Marie d’Orléans’ portrait by Ary Scheffer (1839), which had remained in her son’s Philippe de Wurtemberg’s family ever since. And at Galerie La Nouvelle Athènes, the opening of a charming exhibition of XIX th century drawings was the place to be last Tuesday. You can still catch it until April 29. 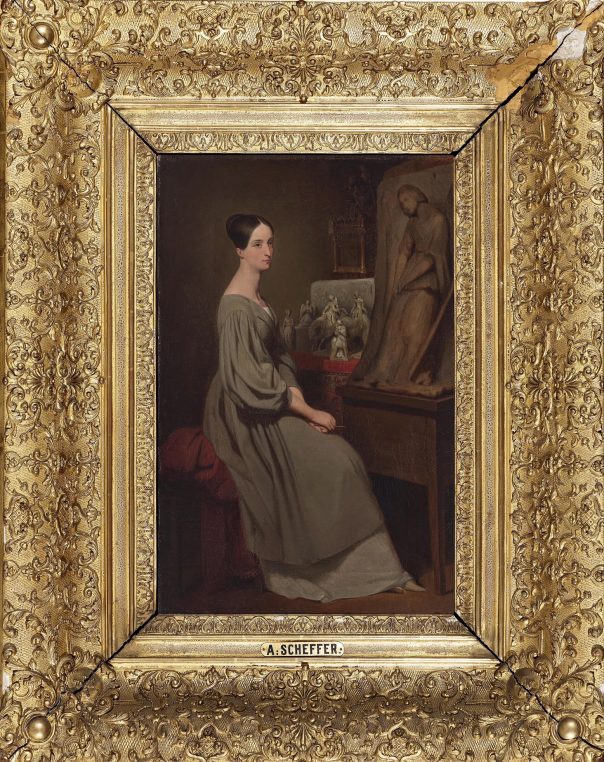 Marie d’Orléans was Louis Philippe’s daughter and an excellent sculptor. Her obsession with Jeanne d’Arc and horses in general, is well documented and her works can be admired at Chantilly where her brother Duc d’Aumale collected many treasures. A bas relief in plaster is also part of the exhibition rue Chaptal of Musée de la Vie Romantique which includes 100 paintings and drawings with a few Joan of Arc, Mary Queen of Scots, Ophelia, stage actresses and ballerinas. My favorite work there was a painting on porcelain from Sèvres, “Corinne au cap Misène” by Marie Victoire Jaquotot. 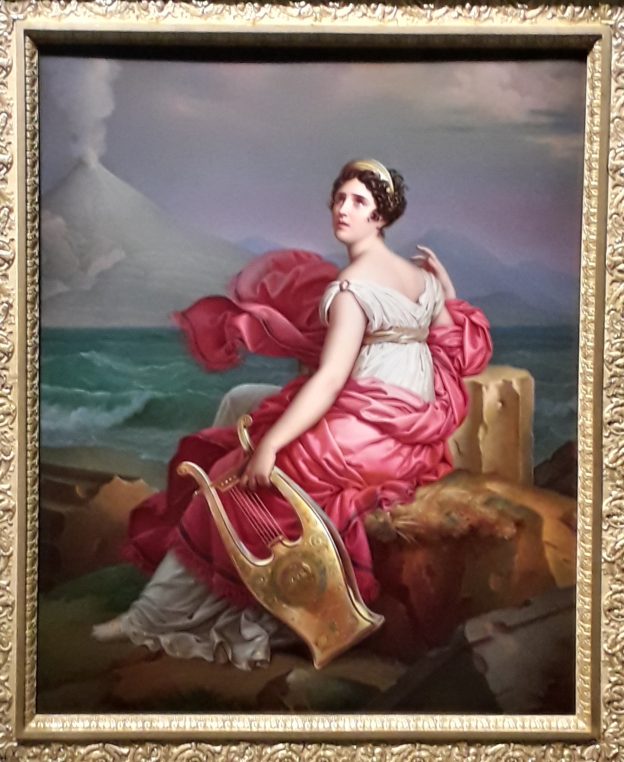 Next door at Galerie la Nouvelle Athènes, the atmosphere was festive with champagne and macarons, a very welcome moment on a grey day. I laughed in front of Henry Monnier‘s lavis “La lecture”, which irresistibly reminded me of Rupert Everett, the bad boy of the 1980’s, in the film “Another country”. And I loved his drawing of “Dilettante”, most probably Berlioz seen from the back and recognizable for his unique hairdo. It was a double surprise since I only knew Monnier, actor and playwright as well as artist, thanks to his street located in the 9 th arrondissement, in “La nouvelle Athènes”, an area which was the center of artistic life in the late 1830’s and where I used to live. 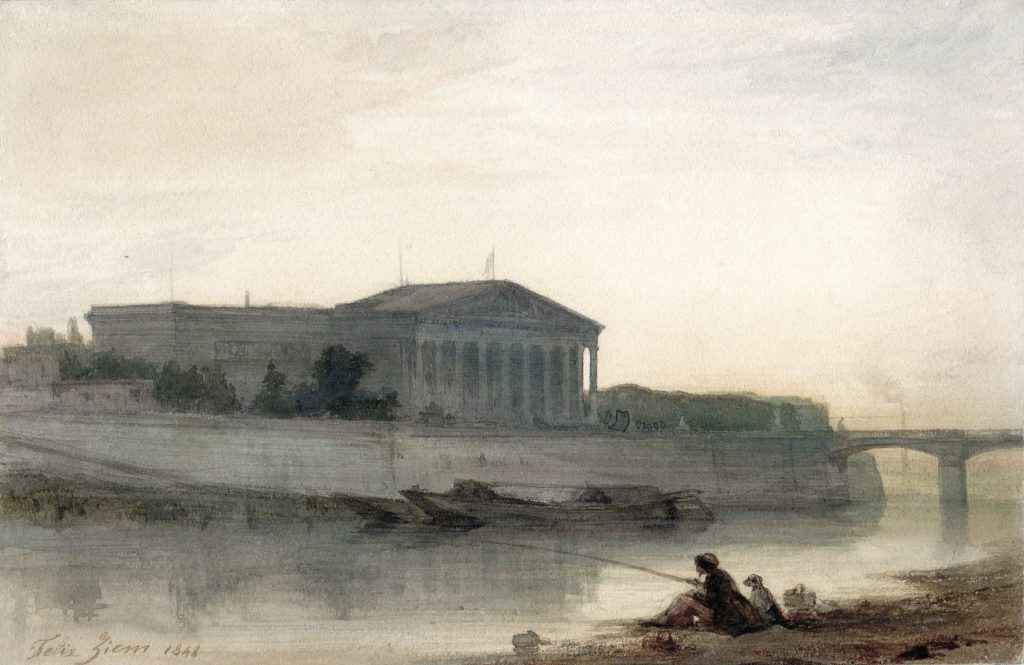 Felix Ziem, Fisherman on the Seine facing the Assemblée nationale, 1848 (after the revolution)

The watercolor by Ziem is particularly moving since the surroundings of Assemblée nationale seem very agricultural and the quiet moments shared by the fisherman and his dog do not tell of the violent 1848 Revolution which deposed King Louis Philippe. He had just landed in Paris, from Burgundy where he was born from a Polish Arminian father and a French mother, and will become successful two years later with a first sale of a Venice painting to the French state.

Raphaël Aracil de Dauksza & Damien Dumarquez who run the well named small gallery “La Nouvelle Athènes”  devoted to 19 th century artists, have a prime quality: they are art historians and document each work with serious research. The catalog of the show is a little treasure. A preparatory drawing of the young (25 year old) Victor Hugo with his wife Adèle and son Charles in 1827 is interesting for amateurs because it shows different attempts by Devéria for future lithographs. A watercolor by Mathilde Bonaparte, of a young woman, is also a good testimony of aristocratic women artists of the time. 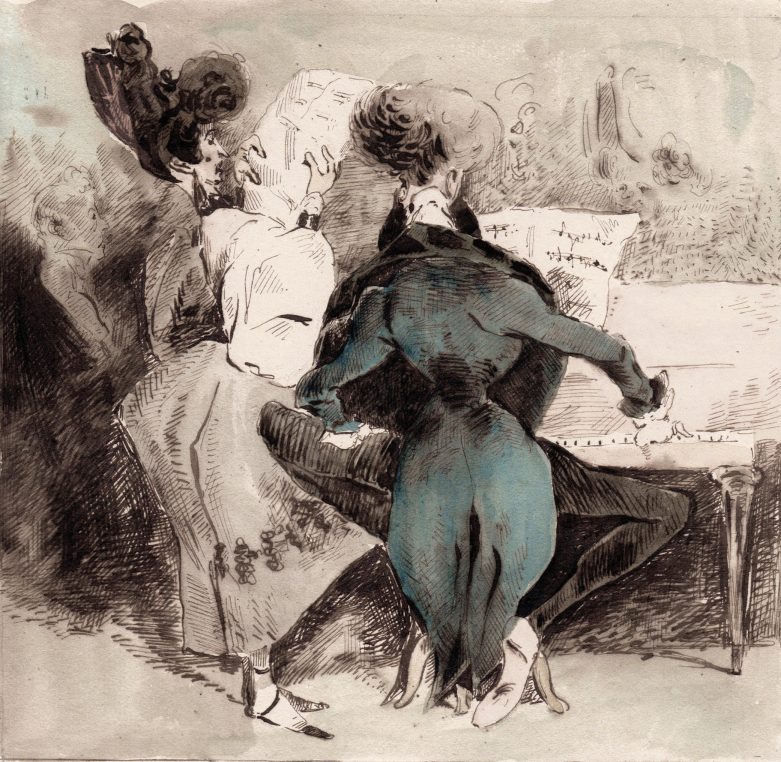 Henry Monnier, Dilettante, ca 1827, (probably Berlioz from the back)

“Two monks” by François Marius Granet, “The temple of Diane in Nîmes” by Jean Jacques Champin, a self portrait by actor François Talma and four drawings of “The Killing of Duc de Guise” by Paul Delaroche are also very appealing.

So make sure when you go and shop on rue des Martyrs to stop at the gallery and the museum. You will be immediately sent back in the 19 th century of Chopin and George Sand whose collections are displayed in the main museum.