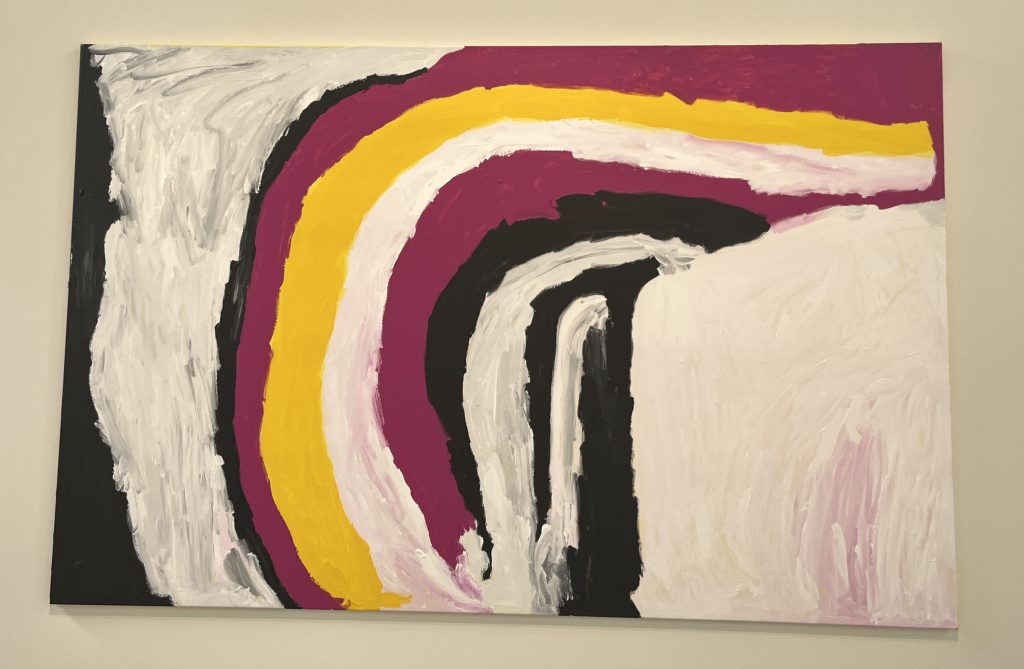 It is completely fascinating to think that an aboriginal woman painter, who has hardly ever left two islands in the North of Australia, should become the center of attention at Fondation Cartier in Paris! Born on Bentick Island, in the gulf of Carpentaria, in 1924, Sally Gabori was forced in 1948 with 63 other inhabitants, to settle on Mornington island at a Presbyterian mission, after a cyclone and tidal wave flooded their 20 km by 12 km birth place. Soon the children were separated from their families, sent to school in English and forbidden to speak Kaiadilt, their tribe’s language. She remained one of the only elders to speak it and was only allowed to return for short stays to her native island. At 81, while living in a retirement home, she discovered paint at the Mornington Island Arts and Crafts Centre. Fondation Cartier  is showing thirty of her monumental paintings, until November 6, in the first exhibition of her works outside Australia. 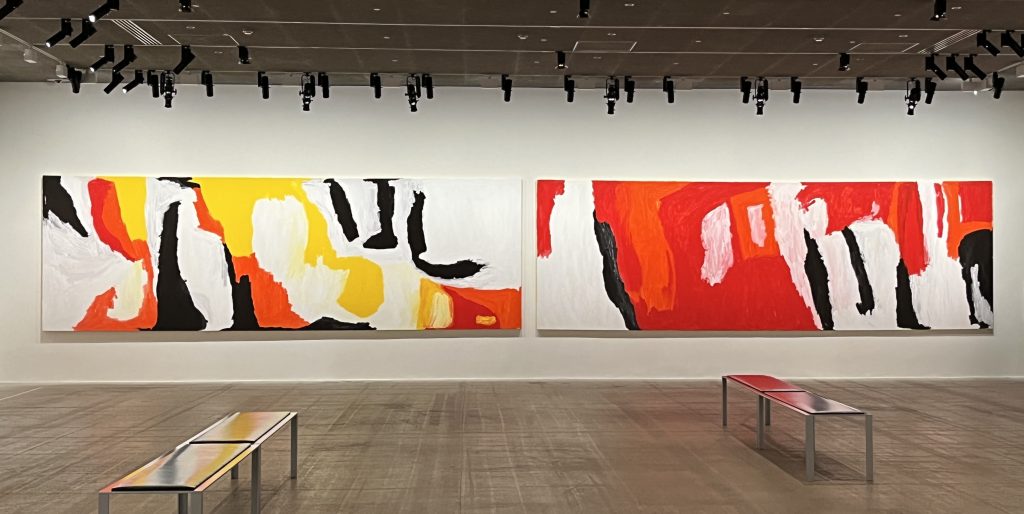 Nyinyilki, 2010, in the bottom floor gallery of Fondation Cartier

This is how John McPhee, Senior Curator of Australian Art at the National Gallery of Australia, describes her style in his 2012 essay for Art Monthly Australia: Undoubtedly, for me, Gabori’s uninhibited use of colour is exciting. It possesses great energy. But then there are the sensual, pale ‘ice-cream’ paintings which suggest a more gentle touch, and the dark brooding works that evoke the strength of nature, and Gabori’s respect for its powers. When looking at her paintings each time they offer something more, something I had not seen before. They are paintings of great sophistication and subtle complexity. But most significantly these are paintings of extraordinary commitment. Every sensual brushstroke, those strong strokes literally pushing paint onto and across the canvas, the smears and dabs, expresses her heartfelt love of her landscape. 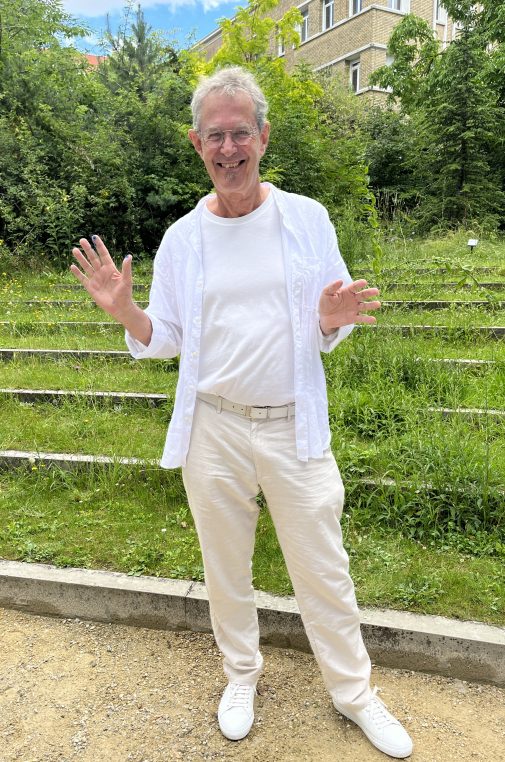 Anthropologist and linguist Nicholas Evans in the gardens of the Fondation

Nicholas Evans who studied the Kaiadilt culture as an anthropologist and met Sally in 1982, had “no inkling of her artistic talent until her first exhibition in Brisbane in 2005… The secret of her sudden surge of her artistic creativity… lies within- the very way in which she had learned to see the world”. Three of her children died in infancy, but after Madge was born in 1953, she finally had eight children who survived. Some of them made the trip to Paris with the paintings. She was accomplished in traditional crafts, making stonefish traps and weaving dillybags from hibiscus bark string. 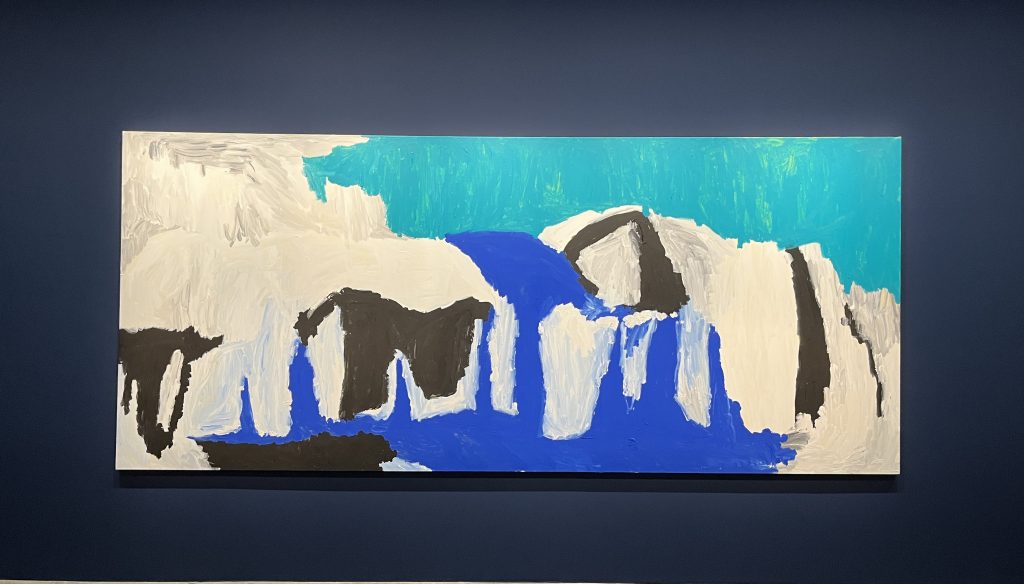 All works exhibited are made of synthetic polymer paint on linen, one belongs to Fondation Cartier, the others were lent by private collectors or by the Bendigo Art Gallery, the National Gallery of Victoria in Melbourne, and the Estate Sally Gabori. Judith Ryan, curator of Indigenous art describes her singularity in these words: The naked power of her use of color as a stationary measure of movement and the impetuous energy of her broken brushstrokes stand alone. Her works unrelated to the dot-and-line, circle-path  iconography of Western Desert aboriginal communities and differs even more markedly from the narrow, vertical ochre paintings on stringy bark of the Yolnu of eastern Arnhem Land.

She was compelled to paint and it gave meaning and purpose to her existence.

A prolific and performative artist, it was not unusual for her to produce 14 small canvases in a morning at the art centre. It is thought that she produces more that 2000 works mainly during her experimental period from 2006 to 2007 goes on curator Judith Ryan. Unconstrained by ethnographic precedent or ritual stricture, Sally Gabori’s body of work exists as painting rue and simple: that is its undeniable power.

At Fondation Cartier until November 6. Take advantage of the lush garden and cafeteria in the summer months, it is a very romantic and refreshing space. 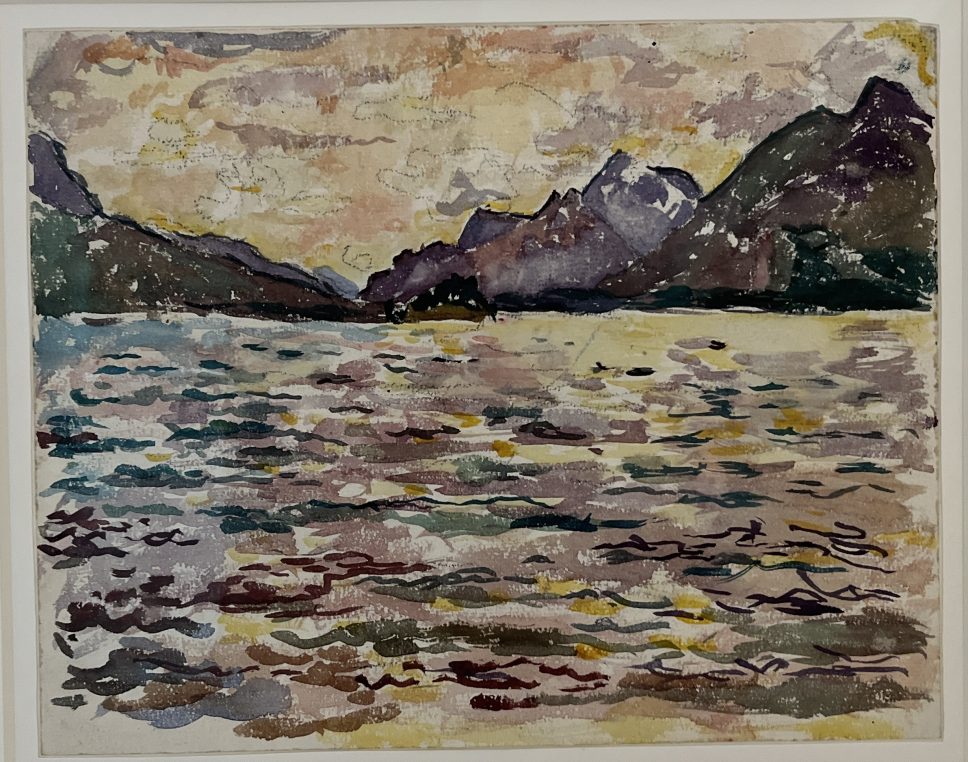 Alberto Giacometti, Hills by the lake, 1919, watercolor on paper

On your way out, do not miss the Fondation Giacometti, the ravishing studio and gallery of Alberto Giacometti’s  across boulevard Raspail at 5 rue Victor Schoelcher. At the moment “A tree as a woman, a stone as a head”, sculptures that the master created in 1950 near his family home of Stampa and exhibited in New York at the Pierre Matisse gallery.

Mountains, lakes, forests, are set in the very pretty house where sculptures alternate with drawings and paintings. It is a very original visit not to be missed if you have never been. Fondation Giacometti until September 18.

2 Comments on “Sally Gabori is a revelation at Fondation Cartier”