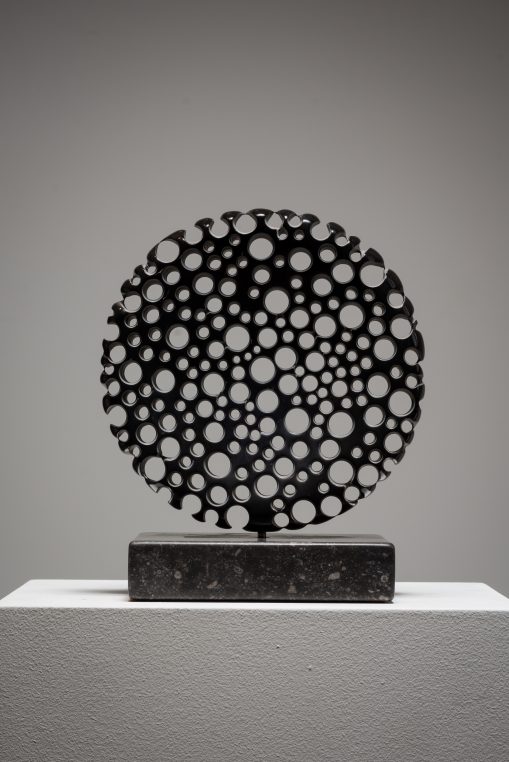 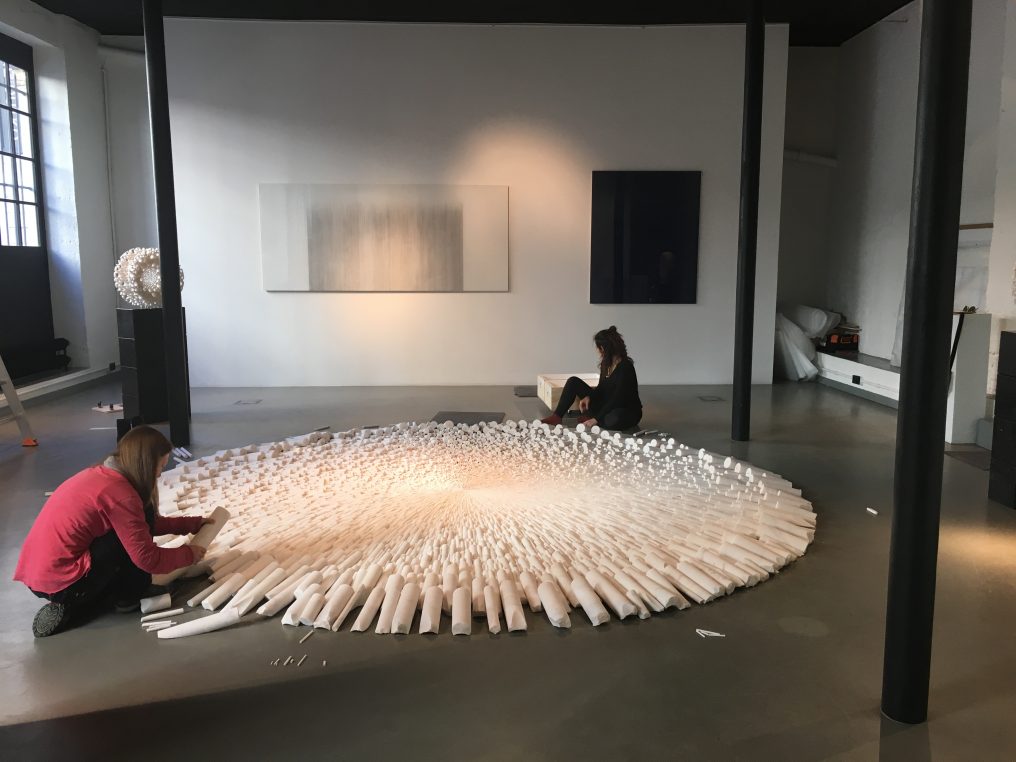 The installation of Matthias Contzen’s marble mandala took four days an dis for meter wide in diameter. On the back wall, two plexiglass works by Tom Henderson

Walking towards Galerie Dutko on the edge of Ile Saint Louis, near Hotel Lambert, was a very soothing experience. I crossed the pont de la Tournelle and checked on Notre Dame where large cranes are now at work, walked past Helena Rubinstein’s former house at 24 quai de Béthune and arrived in the most beautiful little street, rue de Bretonvilliers. There awaited me two wonderful artists, German sculptor Matthias Contzen, and Tom Henderson, a British artist who lives in Provence. Both prepared this show “Shapes in Silence” for a year and their works are in conversation with one another. 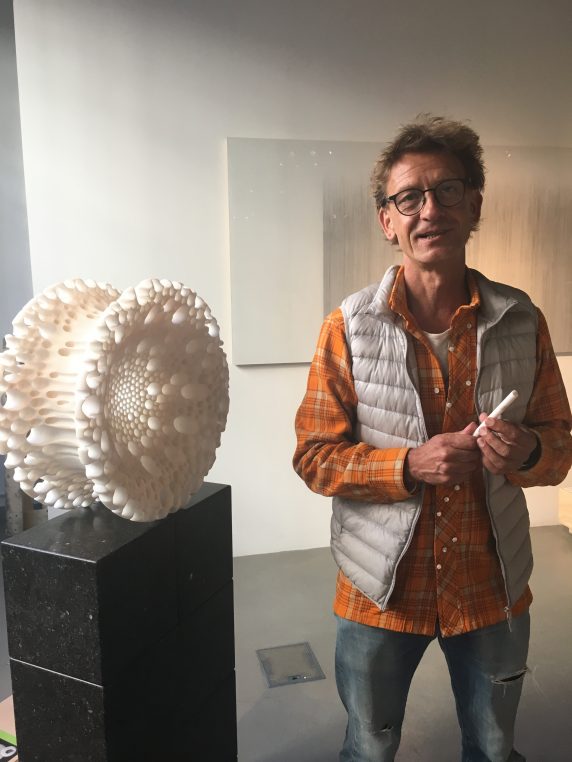 Matthias Contzen lives in Cascais near Lisbon where he finds the perfect marble for his sculptures. Translucid and with pink reflections. “It attracts the light better than white Carrara marble”, he answers when I ask him why he uses Portuguese marble, and he likes to play with the contrasts, shades and light, that he creates while carving a large piece. He has been cutting out his Tori  with a diamond drill and saving the pieces to create a gigantic mandala of 4 meters in diameter, which took him four days to install with two assistants. 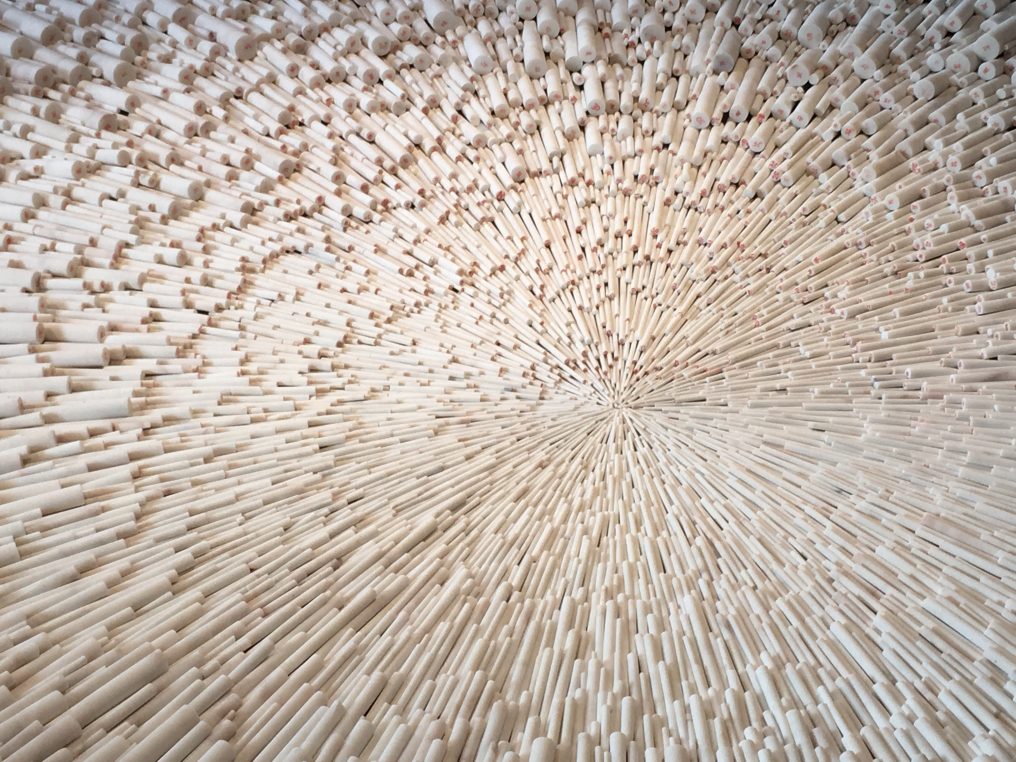 Each piece (4 500 in total) carries a number, which tells its size and this helps building the shape from the center. The effect is tantalizing. Another inspiring piece is Planet 108 which contains a hundred and eight holes, which he drills at the pace of one a day. Some are large enough that you can put your hand through them and I could not resist taking a picture from inside, terrified to drop my iPhone in the masterpiece! The result is a city with tall buildings reminiscent of New York. A smaller one is called London… 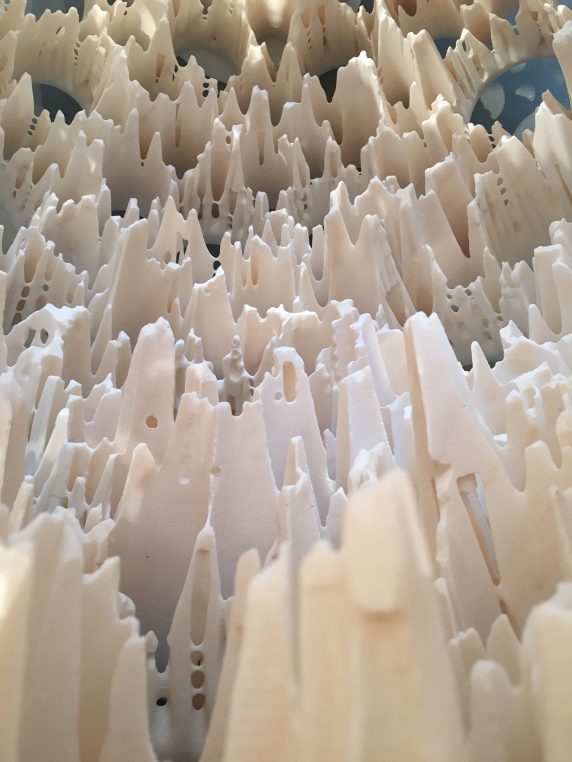 Contzen has been working on light and sound for his series Planet in the last ten years. He studied microfossils diatoms in the ocean and uses a diamond hollow drill to sculpt. Before marble, he used granit but did not find the same light nor malleability. He can talk endlessly about discovering new paths  while he sculpts a piece and meandering in the different passages that he creates. 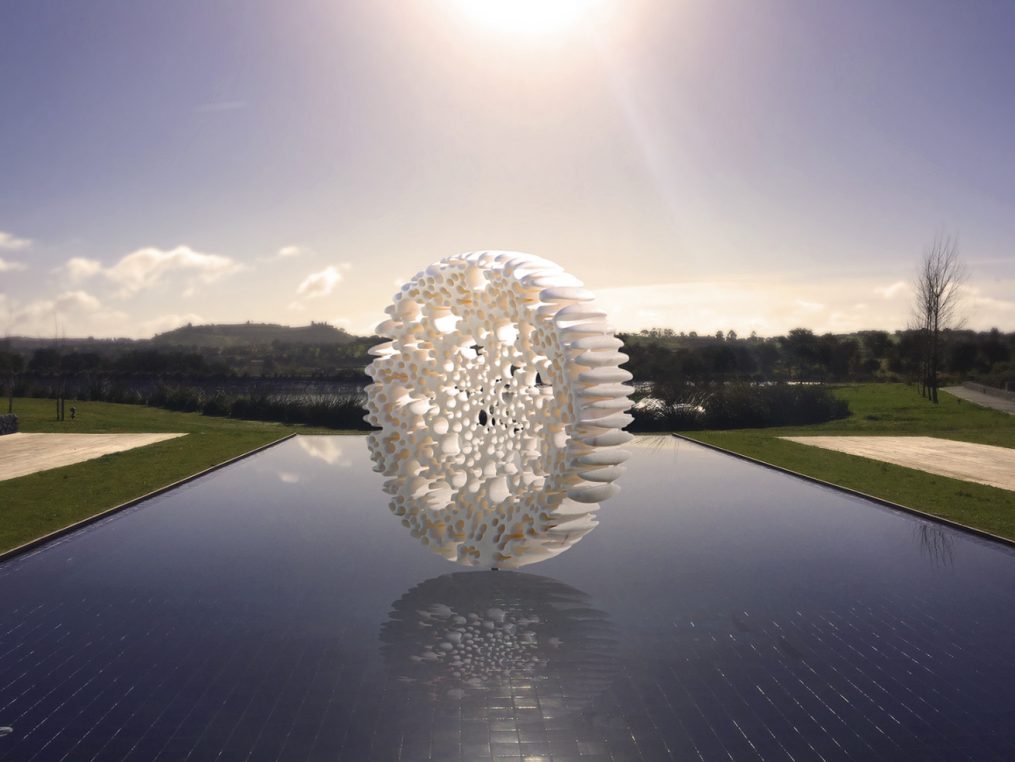 Tom Henderson lives in Villecroze not far from Draguignan in Provence. He was trained in Newcastle and London and worked for a while in the wonderful Daunt bookstore until his first shows took place. He has been exhibiting with Galerie Dutko for a while. He uses plexiglas which he paints on the inside and also works on paint reflections  and wall sculptures. He created special pieces to converse with Contzen in this show.

The gallery is superb and worth the visit. “Shapes in Silence”, until June 22, at 4 rue de Bretonvilliers.