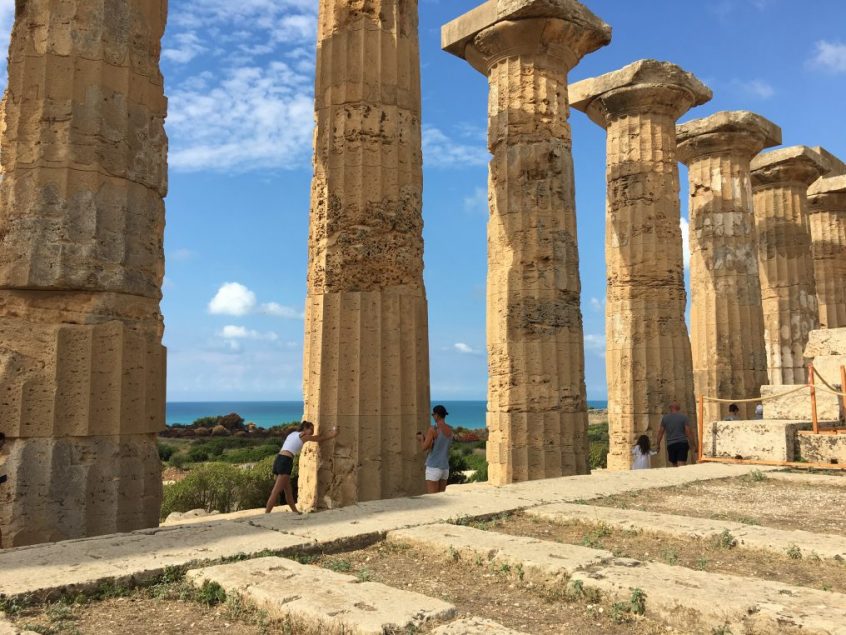 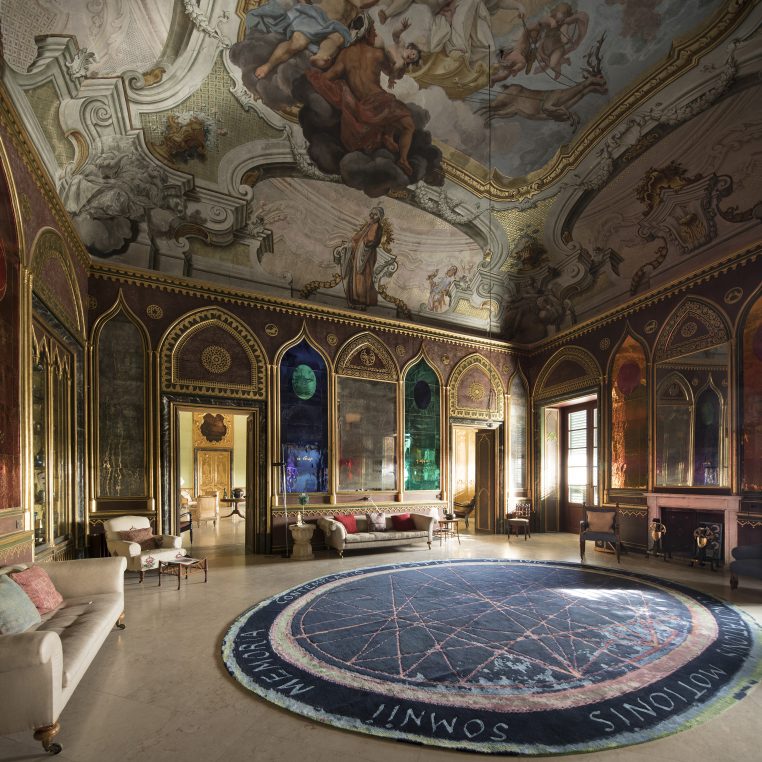 My holidays in Sicily did not start well. If you have read “A Summer’s lease“, the hilarious John Mortimer novel on an English family who rents a house in Tuscany and never gets water because the owner has not paid the bill, you will understand what we went through. I was getting ready to make a wonderful potato purée in a sea shore villa west of Agrigento, and have a cool shower before a gin and tonic, when suddenly, there was no more water on the tap. Well I used what was left in the hose in the garden to cook… 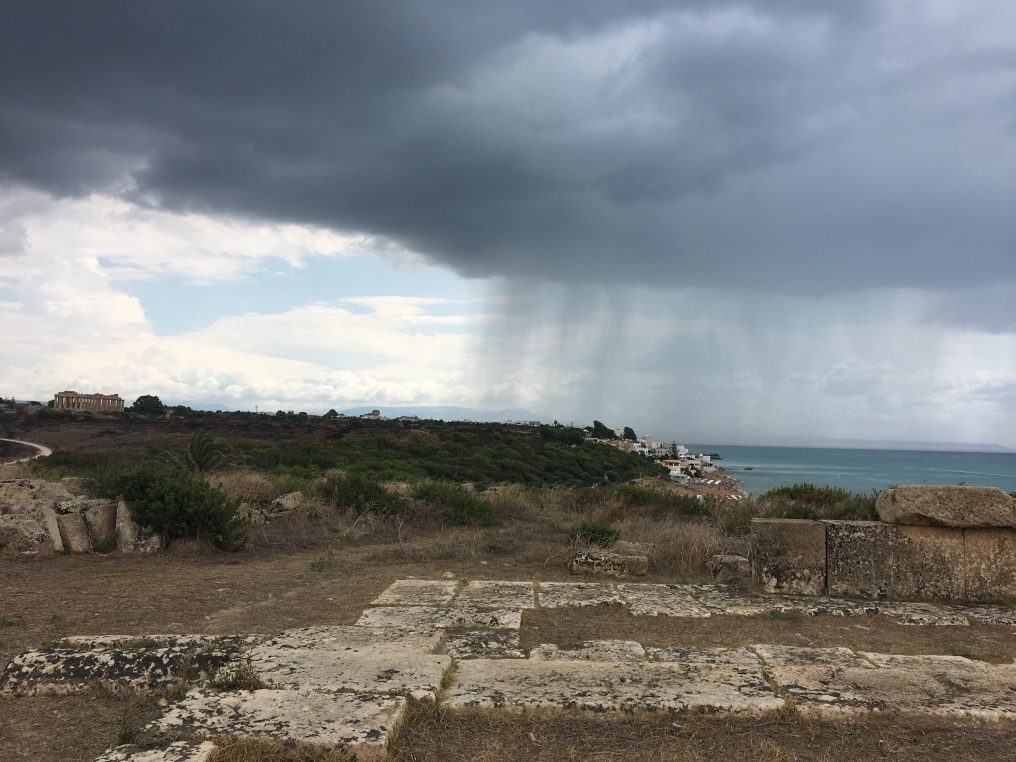 A storm comes unto Selinunte

Then came the mice who danced around the kitchen, and the garbage which was not picked up for days and the electric gate which went berserk, making our precious Fiat Panda a prisoner for a whole day. On the second night, a huge fire started a few hundred meters from us while lightnings were illuminating the sky. We called the fire department but they laughed and said it was only the local farmer burning his fields… Yet all these menial problems did not deter us from having a beautiful time in Borgo Bonsignore, a tiny Mussolinian village with a huge and deserted beach and a great pizza bar, the Gallo d’Oro. We invented all sorts of tragic enemies and cheered up on figs and oranges picked up in the garden. 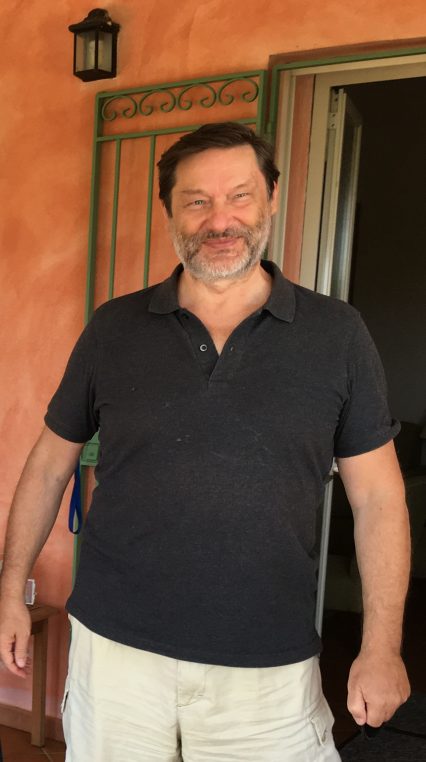 Enrico Pandiani, is the author of eleven thrillers including the series, “Les Italiens”

Our little group included the delightful and hilariously funny Enrico Pandiani, who writes thrillers set in Paris with a brigade of “Italian” cops. His six novels of “Les Italiens” are the topic of a mini series on Italian television this fall and his latest Noir novel “Polvere” (Powder) has just been published by Planeta in Italy. He is not yet translated into English.

On the island of Mozia, this beautiful young man in white marble, wears a pleated toga

We all went to visit Mozia, the beautiful island just off Marsala, where Giuseppe Whitaker opened an archeological museum with his finds on this site built in the 8 th century bc by the Phoenicians and destroyed in 397 by Denys, the tyrant of Syracuse. The young man of Mozia is the key attraction. This marble statue probably comes from Carthage and shows strong virility and a very effeminate pose in a pleated toga. The large park with its black and white mosaics and its sacred pool of unsalted water, is facing the salt mills and the commercial city of Marsala where the Whitakers started an empire trading wine. 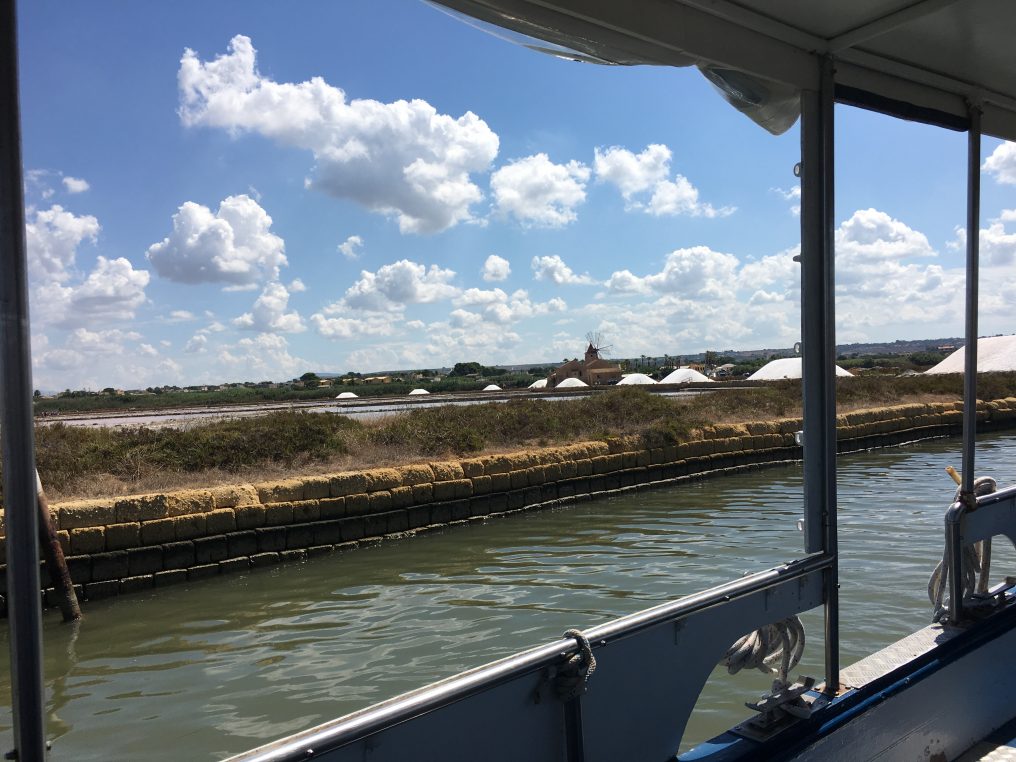 The salt fields and the mills in the background in Mozia

But what really excited me this year was to discuss in my broken Italian tinted with Spanish, at the macelleria, with the young butcher who had the best carpaccio di vitelo, with the wine merchant Max Maraventano who only sells Sicilian wines and gave me orange cakes for the pleasure of the conversation. His little shop in Ribera, Maxervice, attracts everyone from the area and he sells the Tasca wines from Reagaleali, the Planeta wines from Memfi and beautiful Etna wines with a very special taste given by the lava covered ground.

Federico Alba, the only Sicilian Golf pro, was born in Ribera

Through him, I met the only Sicilian Golf pro, Federico Alba, who spends summers in Borgo Bonsignore and teaches in Abu Dhabi in the winter. How this young boy from Ribera, a former football player, taught himself to play golf at Verdura Golf resort and became at 29 a successful pro, is one of the miracles of Sicily. His French and his English are impeccable as are his looks, he will go very far. 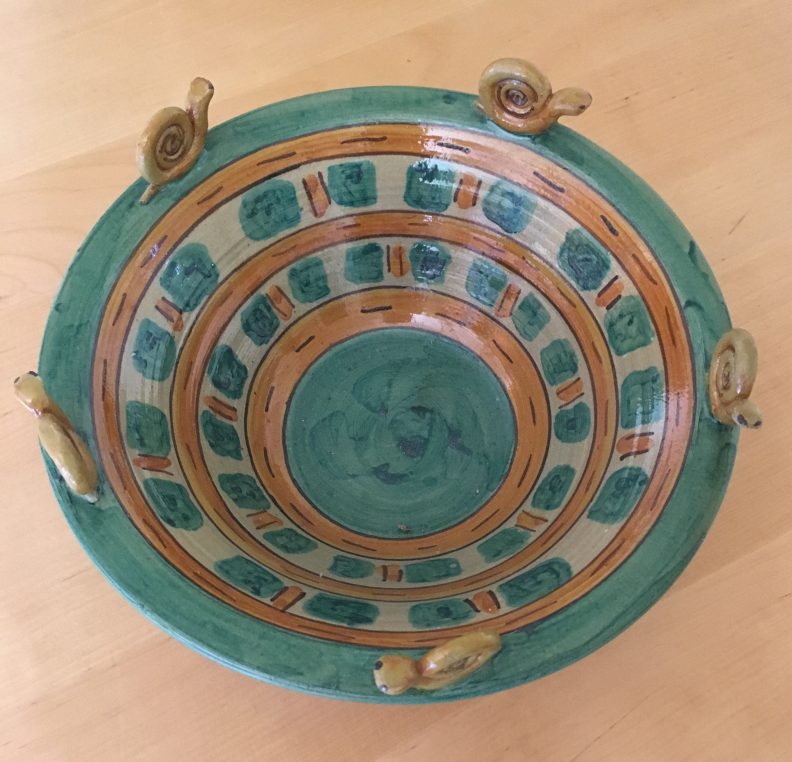 In Burgio, a hand painted dish with little snails

A quick trip to Palermo enabled us to see the XVIII th century Palazzo Butera which is being turned into a contemporary art center by Francesca and Massimo Valsecchi. It is one of the most beautiful palaces in Palermo, overlooking the harbor and was in ruins when the couple from Milano took over. It has been entirely restored by a team led by architect Giovanni Capelletti who has mixed spectacular contemporary design with the old frescoes and baroque ceilings, preserving the roots of an antique Jacaranda tree under a glass floor! Anne and Patrick Poirier are showing a large carpet in the private apartments of the owners and starting in 2019, the palazzo will host contemporary art shows from their collections. 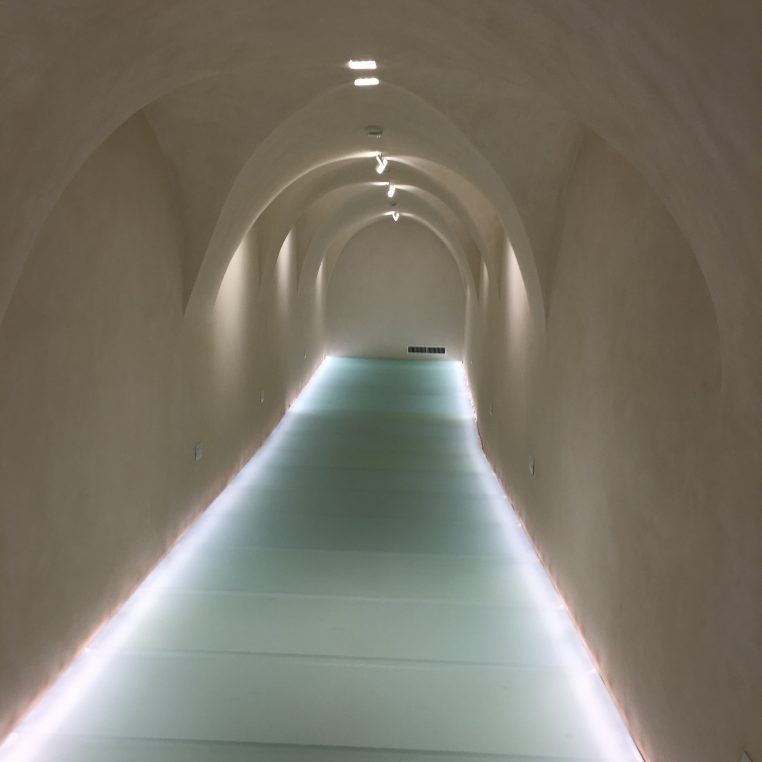 A contemporary gallery in the palazzo looks like a dry pool

It sits next to Palazzo Lanza Tomasi, where the author of “The Leopard”, Giuseppe Tomasi di Lampedusa, lived at the end of his life after his own palazzo was bombarded at the end of the war. One can stay in the wonderful apartments run by his daughter in law, Nicoletta Lanza Tomasi, who also conducts a cooking school, “cooking with the Duchess”. It will certainly become even more busy when Palazzo Butera runs at full speed. 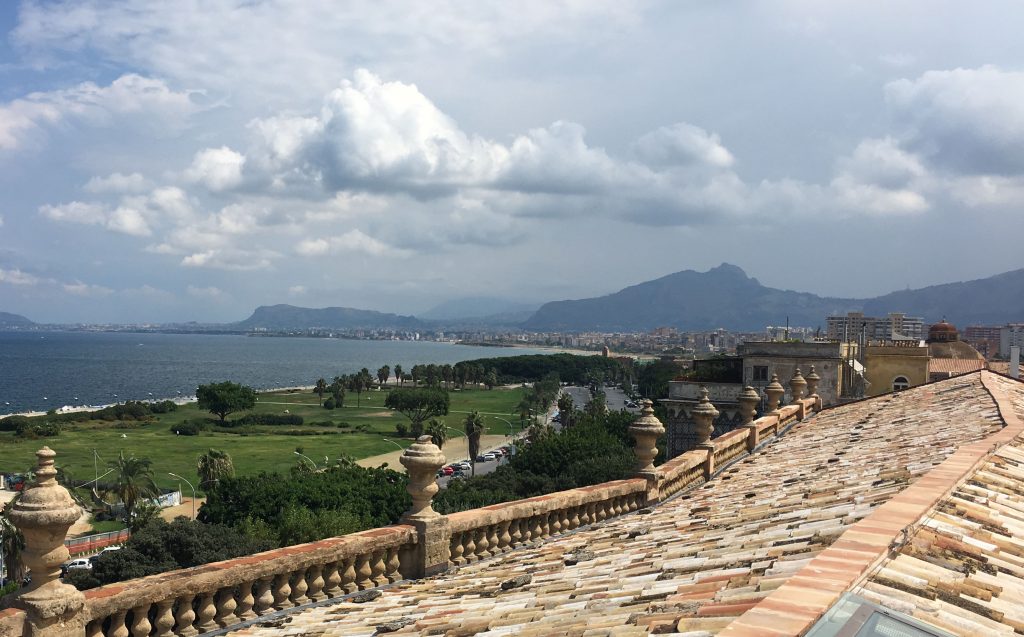 The view from atop Palazzo Butera in Palermo

Wandering around town in the summer heat was a challenge but the beauty of the city was too exciting to be missed. Manifesta, the art biennale was on and we wandered around the exceptional botanical garden  and Palazzo de Seta with its views of the sea. 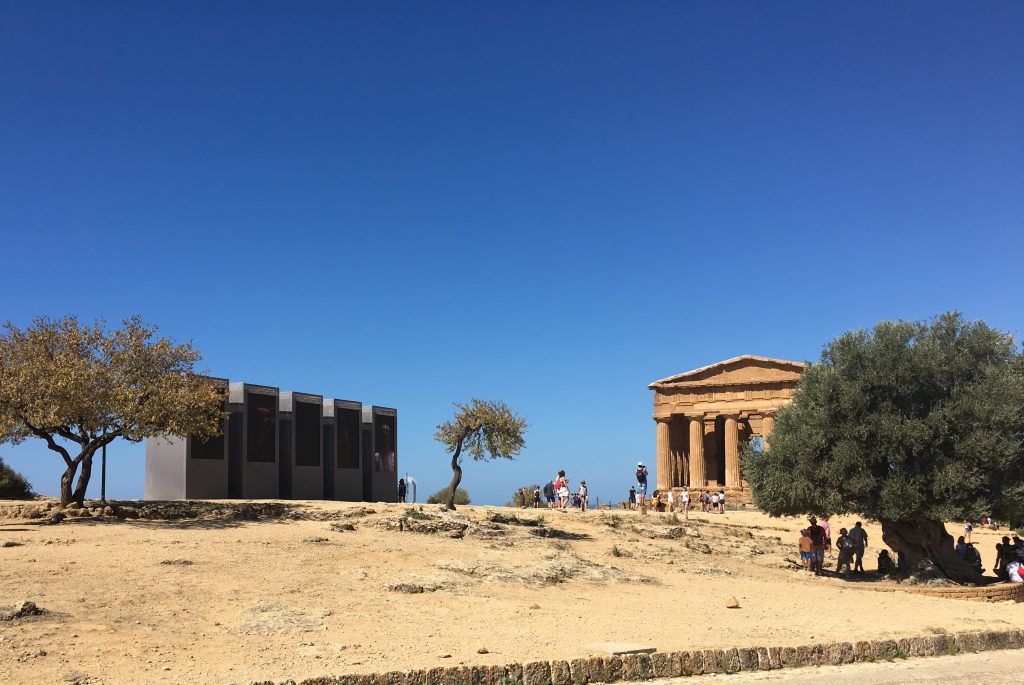 When we came back to our orange grove, I took a friend to see the Valley of the Temples in Agrigento and was apalled to see that a Jan Fabre exhibition of videos « Ecstasy and Oracles » was destroying the perspectives of the temples. How stupid to show screens in the full Mediterranean light! This exhibition runs until November in Monreale near Palermo and in Agrigente and does not make any sense.

I regained my happy mood with a few Aperol Spritz, spaghettis with sardines and a lot of burrata from the market. Sicilian cooking is quite exceptional and we were lucky to taste it everyday thanks to Carmela and Mimma! 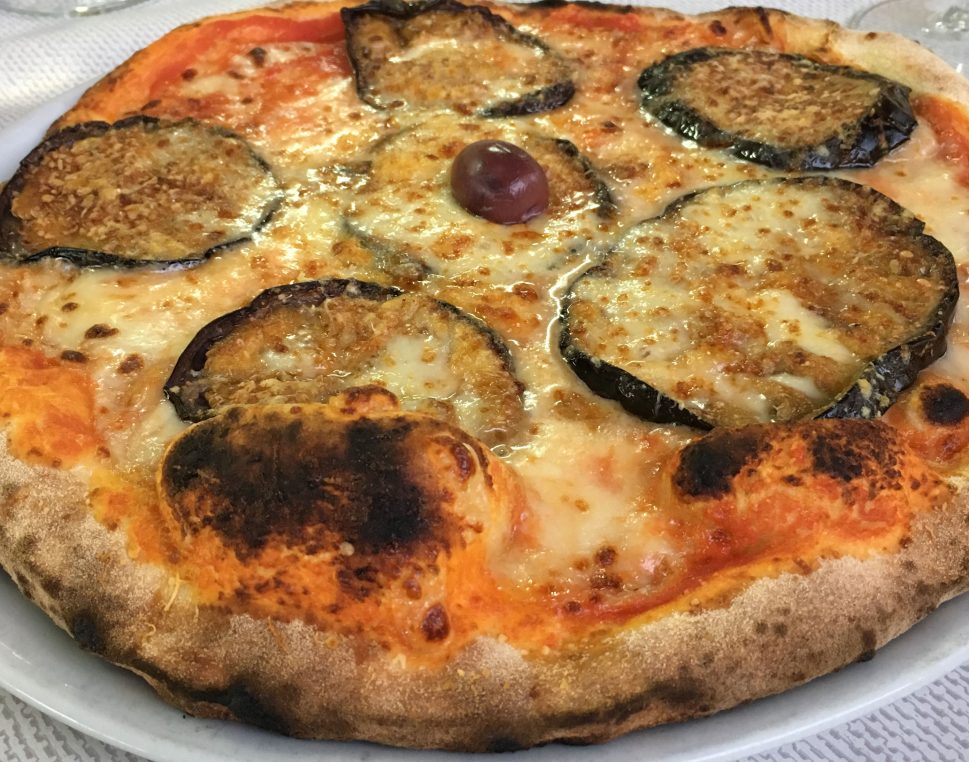 And of course indulging in pizzas (only at night) was effortless

I loved comparing the different granita di limone and pistachio ice creams from the ten gelaterias in Ribera and Sciacca and watching the beauties on the beach who roasted all day long. We also indulged in salad bowls and terra cotta sculptures from Burgio, a little village in the mountains which specializes in green and beige ceramics reproducing the colors of olive trees in the dry fields. From there we drove to Caltabellota, a town at 1 000 m  straight above the sea, which the Normans took over from the Arabs in 1090. 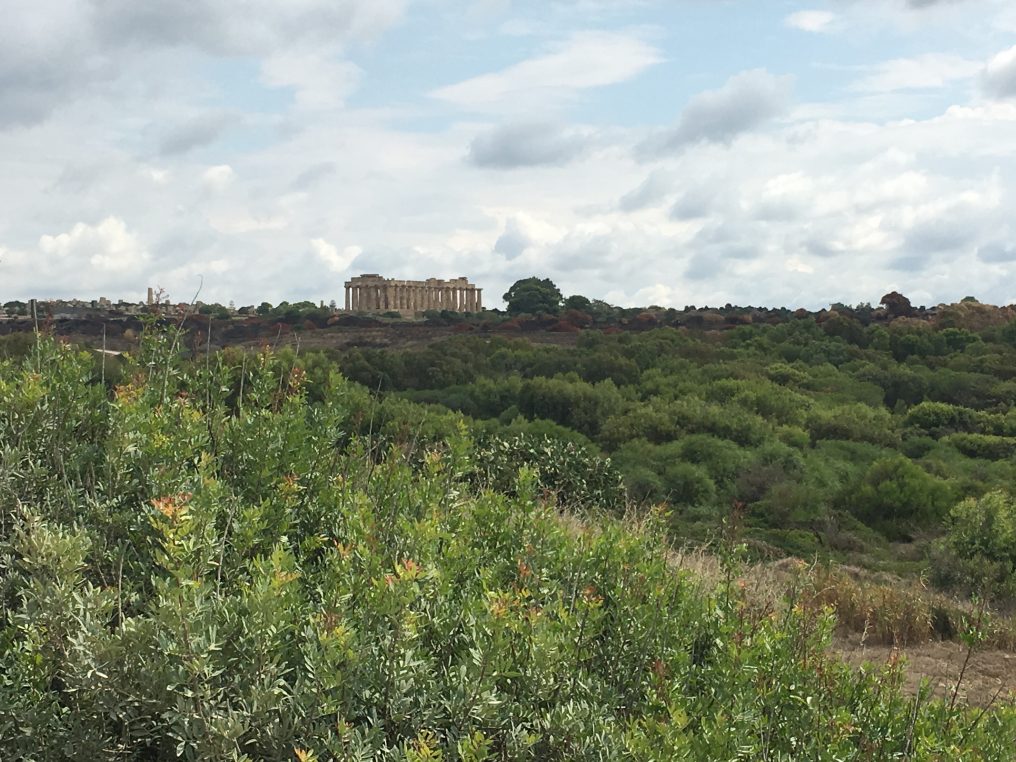 From there the views are unequalled anywhere in the world and swimming on an empty beach and running around the countryside was enough to strenghten me for a very intense rentrée. Once again Sicily was magical even if we were scared on every bridge we went through… The light, the kindness of everyone, the extraordinary food, the antique culture and the richness of agriculture are stupendous. 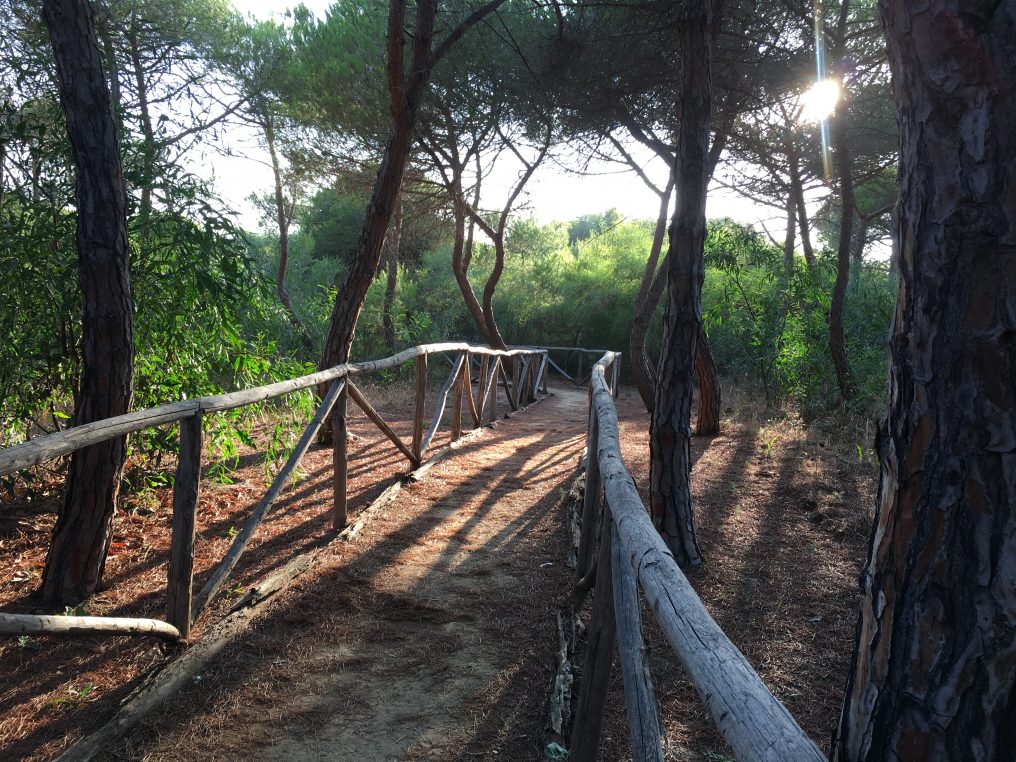 Walking to the beach though a pine forest in Borgo Bonsignore

Unfortunately, emails have suddenly become too numerous again…  Back to work and A bientôt!  for a full program of what to expect in Paris this autumn!