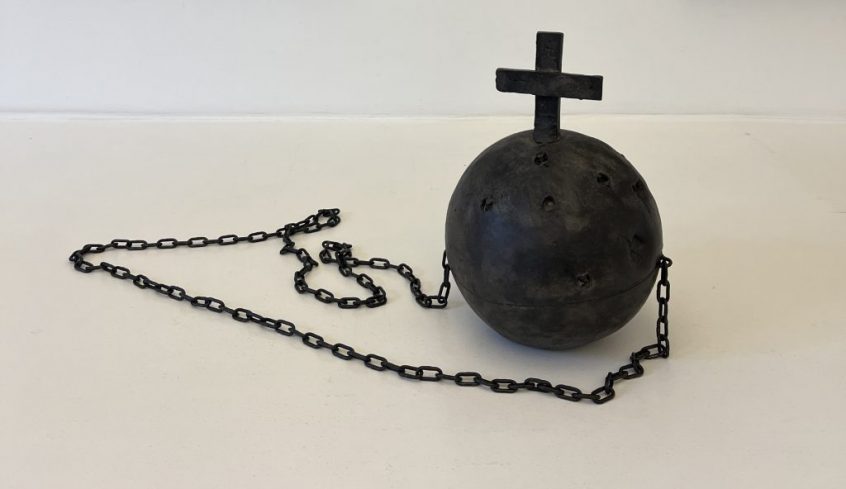 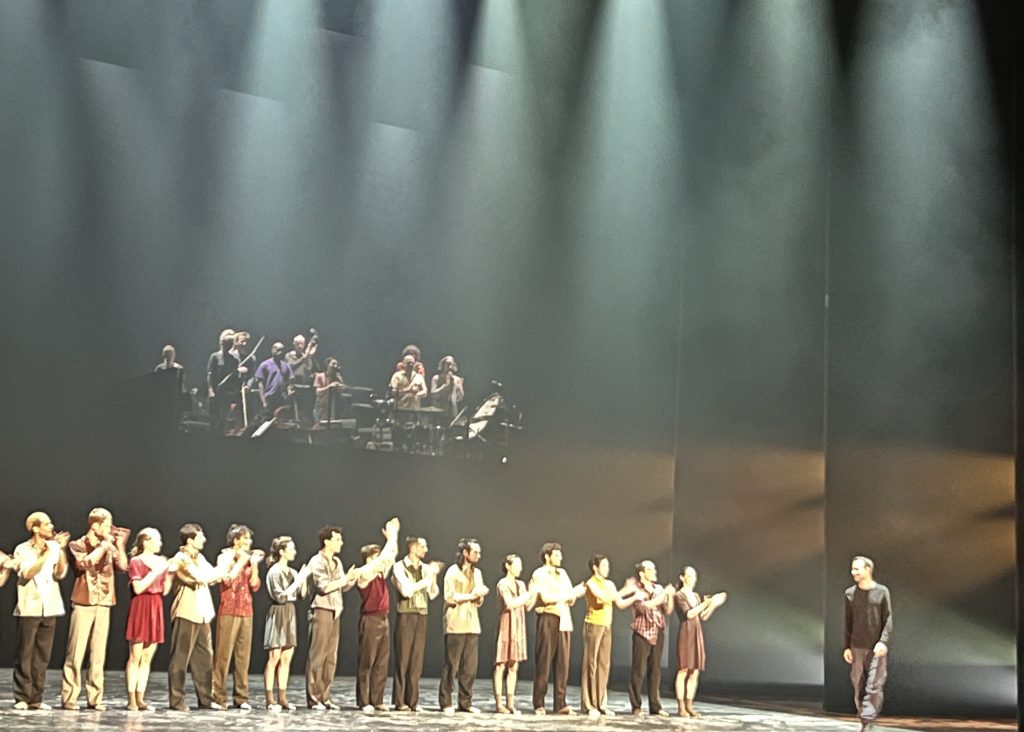 At Opéra Garnier, choreographer and music composer Hofesh Shechter received a standing ovation with the orchestra suspended in the clouds

Hofesh Shechter, OBE, the Israeli choreographer whose mother is Ukrainian, had a spectacular première at Opéra Garnier for “Uprising” and “In Your Rooms”, two vibrant ballets created at The Place and Sadler’s Wells in London more than fifteen years ago. They are now both part of the Repertoire of the Paris Opera. Sophie Calle attracted the contemporary art world at Musée d’Orsay for her series “The Ghosts of Orsay” on the Museum when it was a hotel in a train station. Her obsession with hotel rooms is deployed here as she collected hundreds of messages left by the occupants of room 501 in 1978. At Fondation Azzedine Alaïa, a show describes, with dresses and photos, the beginnings of the couturier in Paris in the 1950’s. At Galerie Lelong, Tàpies and Desgranchamps have a beautiful time. And Fragonard reopens its Musée du Parfum across the street from Opéra Garnier. 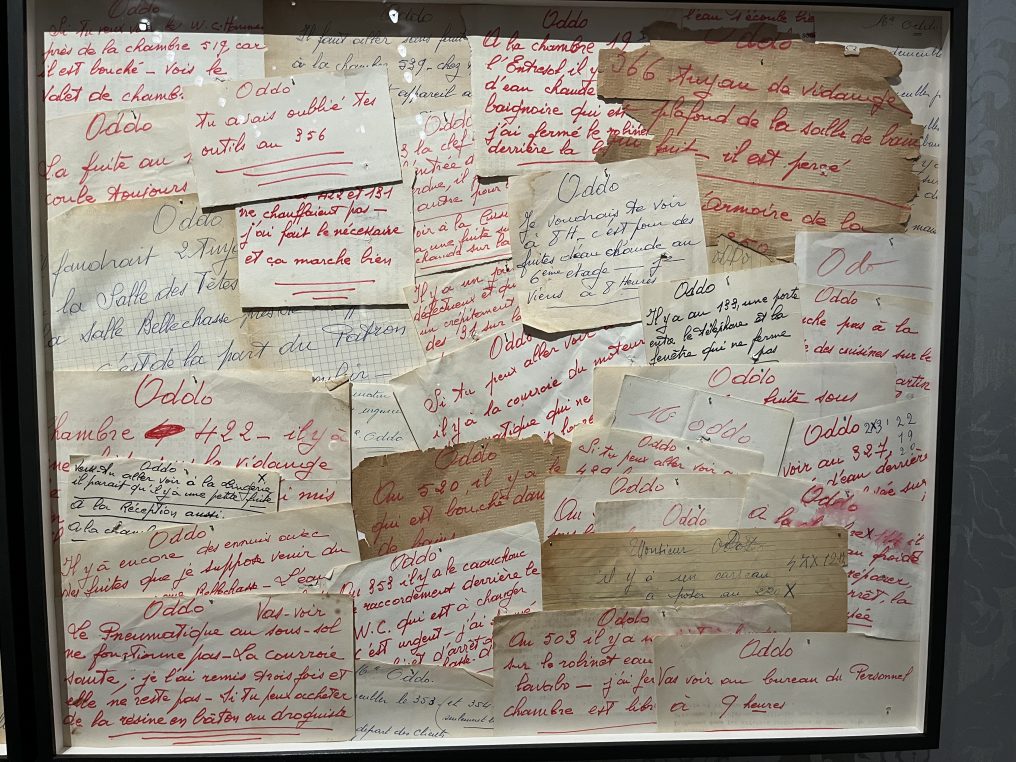 Sophie Calle has kept all the messages to Otto, the repairman, left in the rooms of Hotel d’Orsay

Forty four years ago French artist Sophie Calle, spent several months at Hotel d’Orsay and photographed empty rooms and collected all sorts of papers and clients’ files lying around, before the train station was transformed into the museum by Gae Aulenti. She has returned at night and photographed the paintings she loves at flashlight. She then asked anthropologist Jean-Paul Demoule to study these pieces of the past. The result of her quest and return trip to the Museum is exhibited in three rooms of the first floor galleries (until June 12 at Musée d’Orsay). 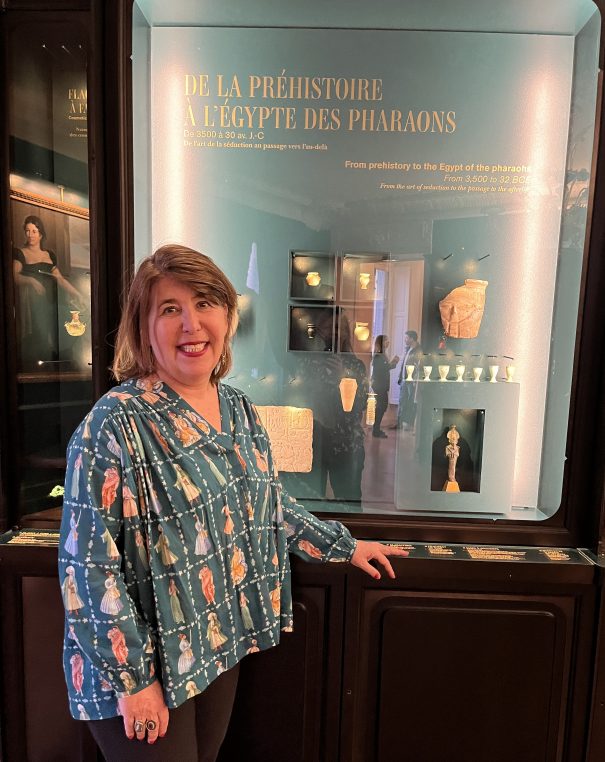 Françoise Costa, one of the three sisters who run Fragonard, in front of the Egyptian collections

Fragonard is one of my favorite presents shop in Paris for its lovely soaps and charming collections of linen and summer shirts. Its museum had been entirely refurbished three years ago and is finally reopening in front of Opéra Garnier, in a Napoléon III hôtel particulier built by Joseph Lesoufaché. It is very amusing to see the collection of perfume bottles assembled by Jean François Costa since the 1950’s. Egyptian glass bottles, copper flasks from Central Asia, XVI th century polychrome glass from Ferdinand II’s workshops but also Marie Antoinette’s red leather travelling necessary, are shown among the old perfumes like Belle de Nuit developed by Fragonard when Eugène Fuchs established the company in 1926, in Grasse. The name was given after the painter who was born there. You will see the perfumer’s organ, a desk arranged in a half circle to accommodate several hundred vials of raw scents. This has sadly now been replaced by computers. Fabergé and Elsa Schiaparelli perfume bottles, are also part of the collections. 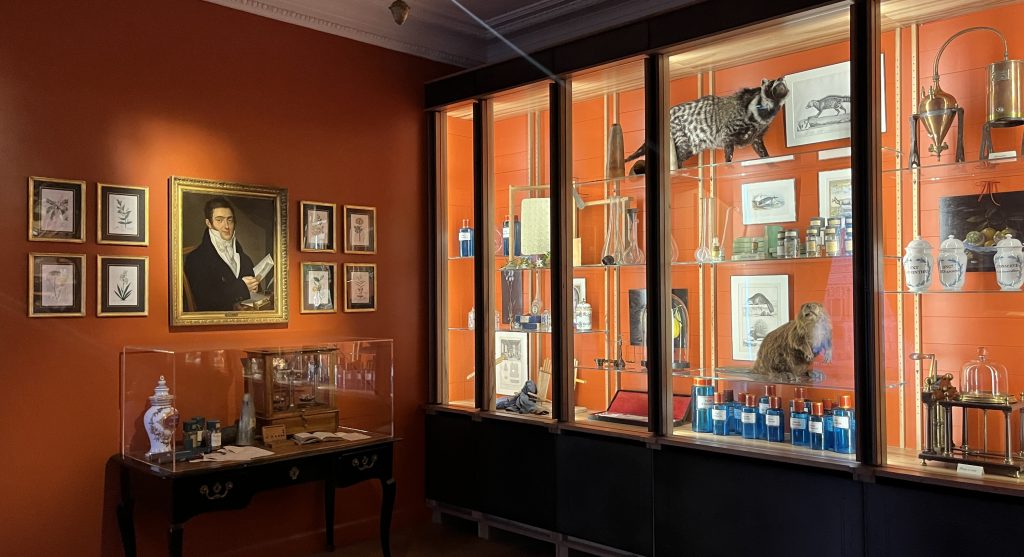 Inside the museum, the portrait of XIX th century perfumer Louis Toussaint Piver with old pharmacy pots and perfume alambique

Just across the street from the pretty museum, stands Opéra Garnier where Hofesh Shechter is attracting young crowds (until April 3). With lighting designer Lee Curran who is responsible for the “decor”, he has created a new world of ballet for the Paris opera dancers and the idea of suspending the small orchestra of ten players in the airs is fantastic. Magic operates fully and one could hear enthusiastic commentaries in German, Italian, English and Spanish all around. 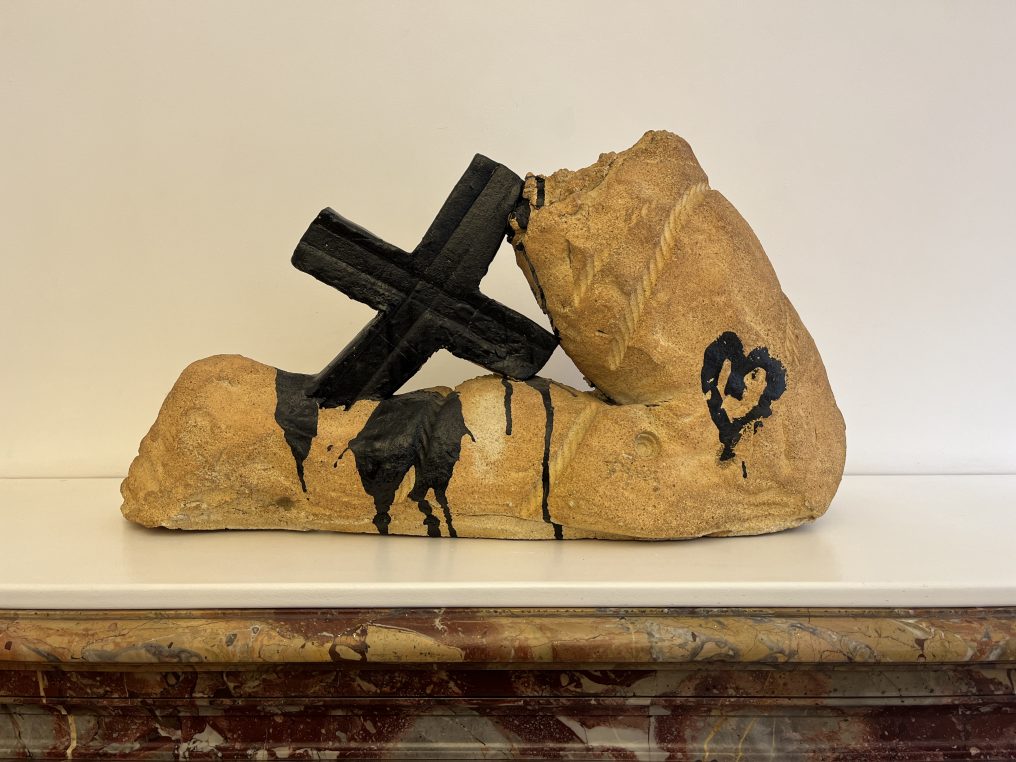 At Galerie Lelong, a triple bill this time, with extraordinary sculptures and paintings on paper by Antoni Tàpies (1923-2012) on the theme of the cross (Creus in Catalan), paintings on paper and prints by Austrian artist Arnulf Rainer at rue de Téhéran and at avenue Matignon, Marc Desgrandchamps who shows large formats and small cards. 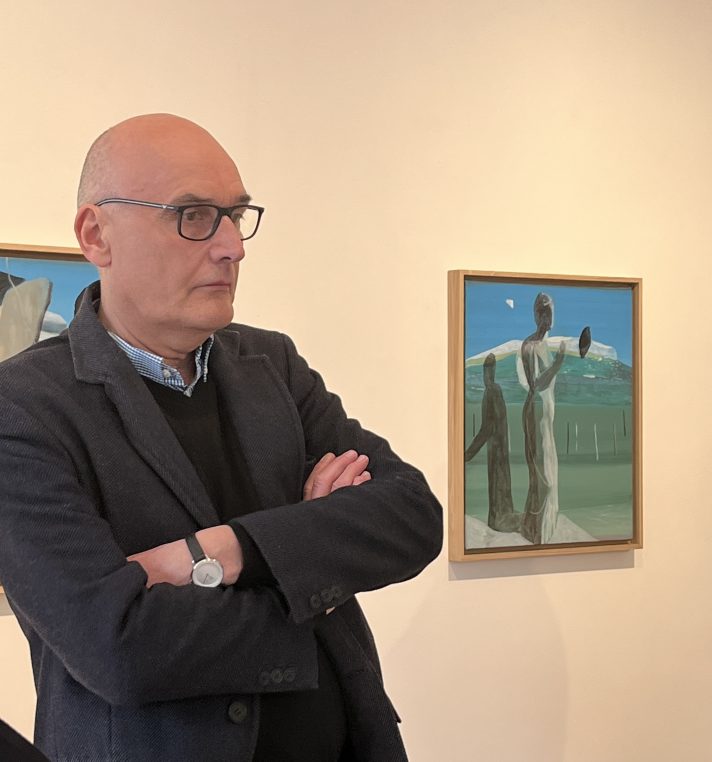 A particularity of Galerie Lelong is that they sell very affordable prints by great masters and a series of old works by Arnulf Rainer includes his self portraits “Selbst in Waage” or “Bauchzentralistion” in grotesque attitudes. I really enjoyed them(2 800€). But of course, I would have liked to leave the gallery with Tàpies’ scultpture “Cama I creu”, at 150 000€. (Galerie Lelong, until April 18) 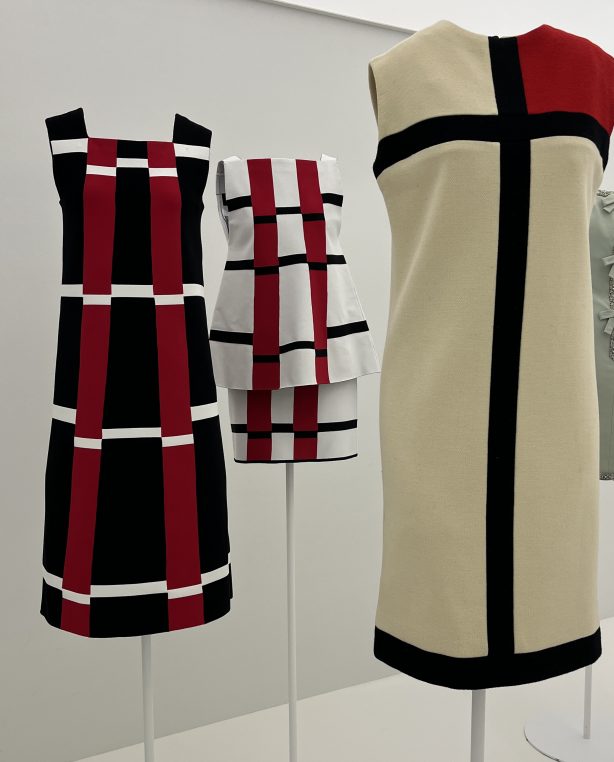 In the 1960’s, Alaïa worked on the prototype of the Mondrian dress by Saint Laurent

You can end up in Le Marais to see the latest Azzedine Alaïa show on his beginnings in the 1950’s, “Alaïa Afore Alaïa“. Once again, it is curated by Carla Sozzani and Olivier Saillard and it is a delight to see the first models designed by the young Tunisian who found wonderful women in Paris to protect him at first. He started as Nicole de Blégiers’ children’s baby sitter at first because it was so hard to find a job for a young Tunisian at the time during the end of the Algerian war. 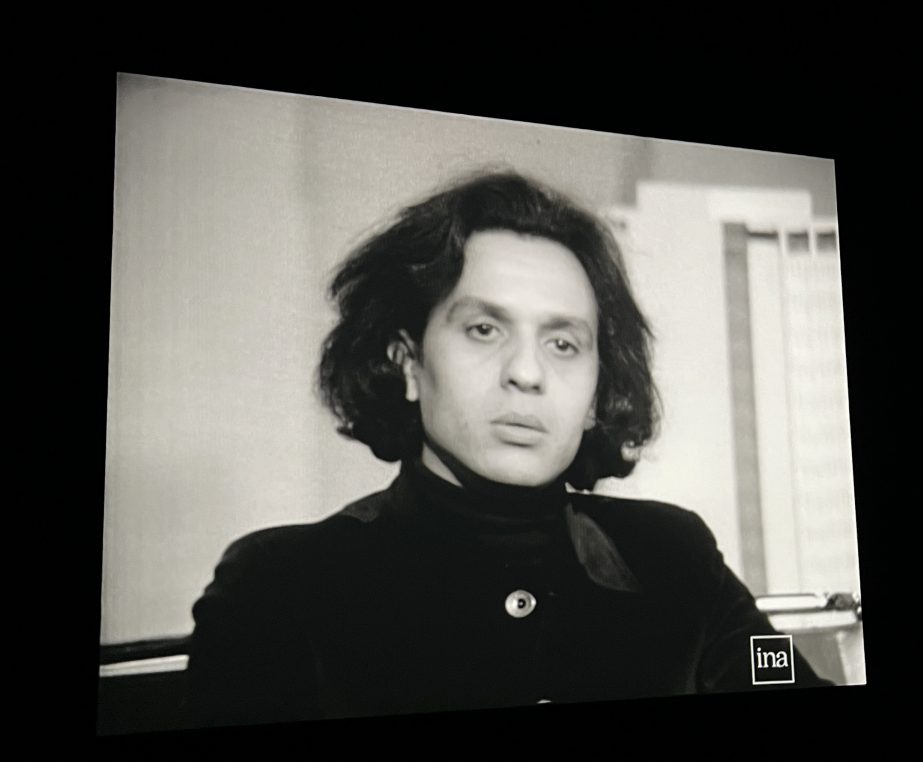 Leila Menchari, Hermès’s long time decorator for Hermès, Great Garbo, Arletty, the model Bettina Graziani (who loved his white shirts) and even Louise de Vilmorin who befriended him and gave him one of her precious drawings of a clover. He was working out of a small apartment on rue de Bellechasse then. And by the end of the sixties, he had hired eighteen seamstresses from the Balenciaga workshops just before the house closed. (Fondation Alaïa until October 23) 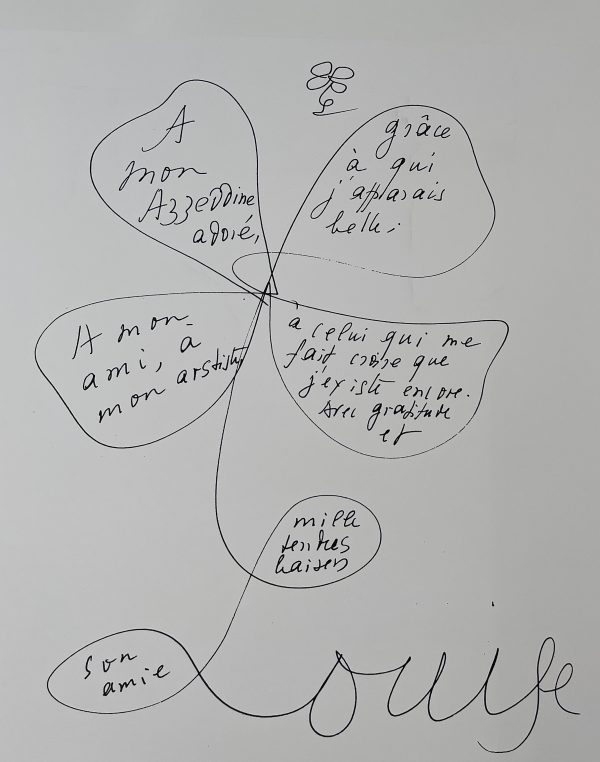