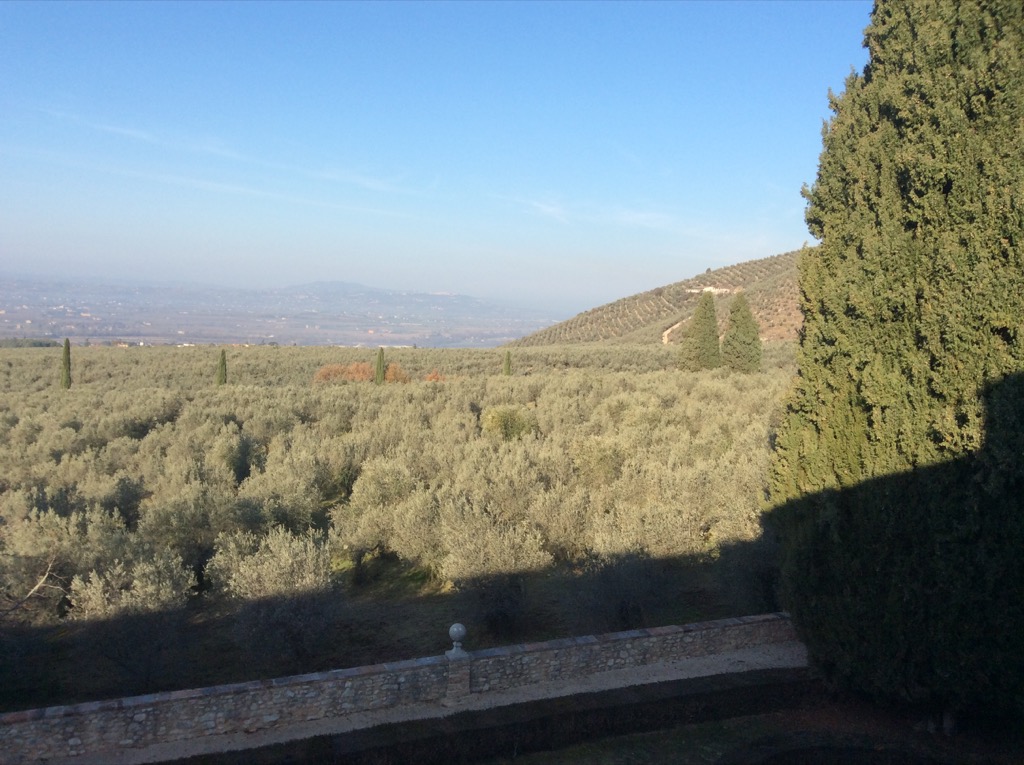 I could not have started the year better than at Villa della Genga, built in  1673 in the medieval village of Poreta, half way between Assisi, Perugia and Spoleto. The olive trees and lentil agricultural estate owned by Alessandra and Paolo Montani, was once inhabited by Pope Leon XII and it now houses a small “village hotel”, entirely renovated twelve years ago with old stones and local materials. Run by their dashing son Filippo Montani,  it is the best escape from city life one can find and I want to return next summer, for the Spoleto music festival with my 45 best friends.

The interior decoration of the hotel is cosy and chic 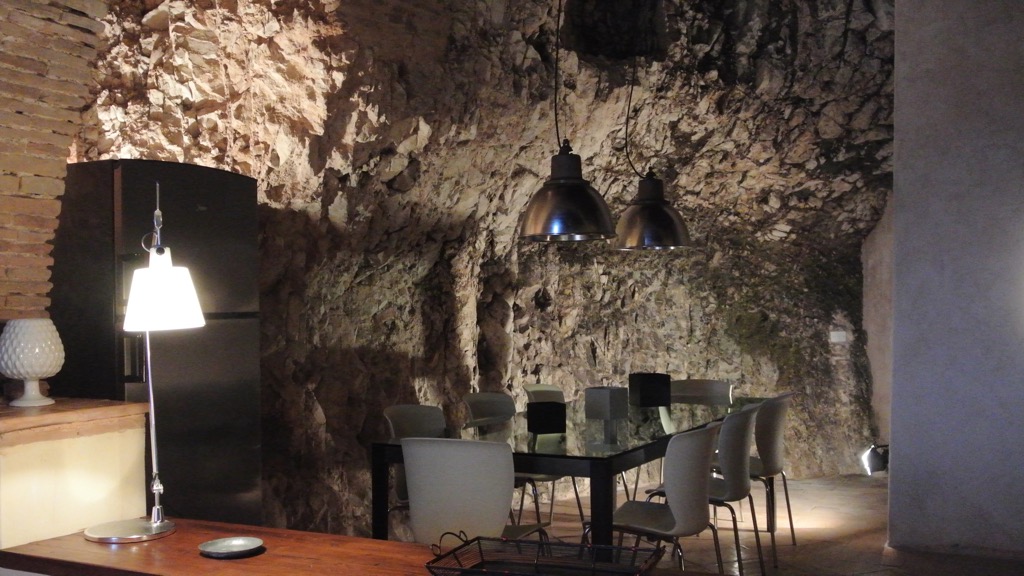 A central spot for visiting Umbria, Poreta is a hideaway, surrounded by beautiful fortified villages built by the Lombards, in the middle of papal properties. We are two hours North of Rome and two hours south of Florence. The refinement of Italian countryside, the quality of interior decoration and the restoration work done by the Montanis are unique. 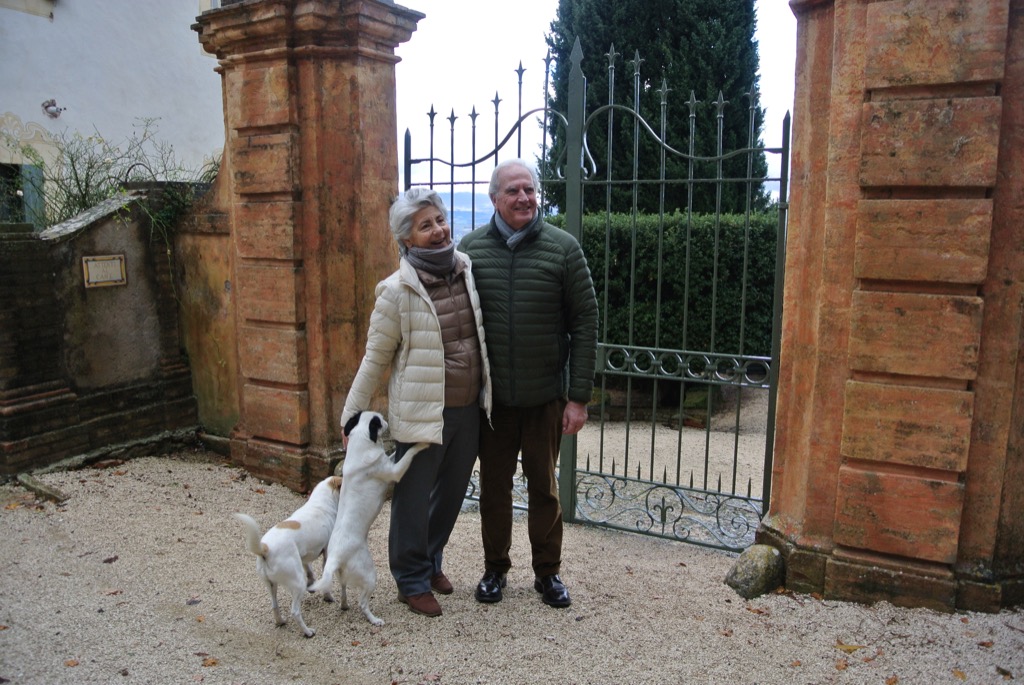 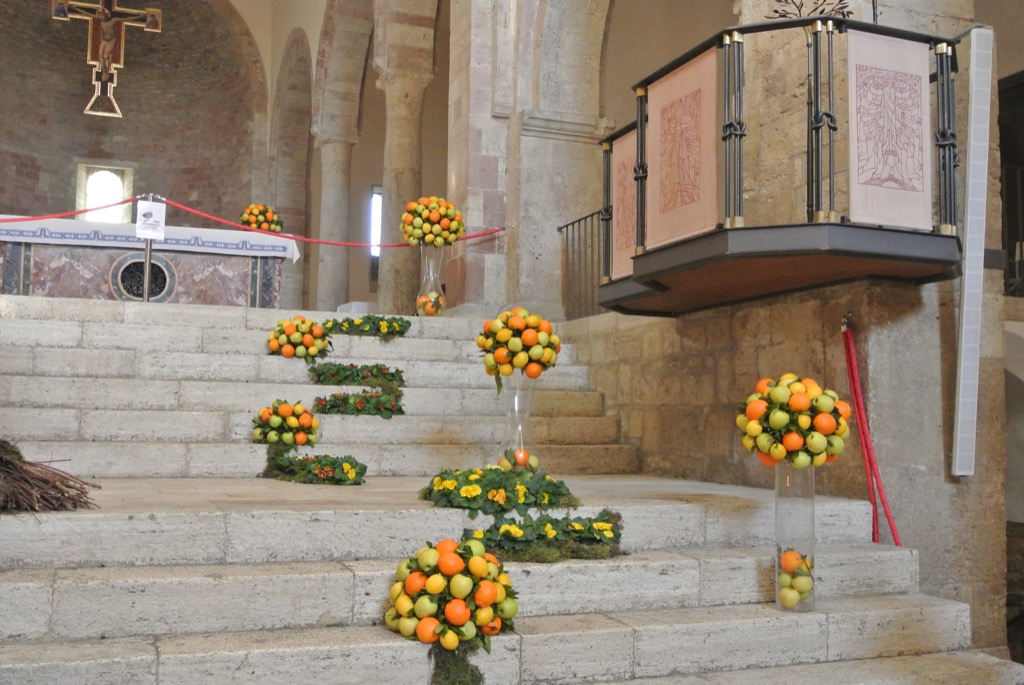 The Christmas decorations in Bevagna rivaled with the frescoes of Spoleto

When having lunch in Bevagna with tagliatelle al carciofi and local Rosso di Montefalco wine, we visited three beautiful churches with nativity scenes and Christmas decorations. In Spello, the Baglioni chapel is unbelievable with yet three more frescoes by Le Pinturecchio. 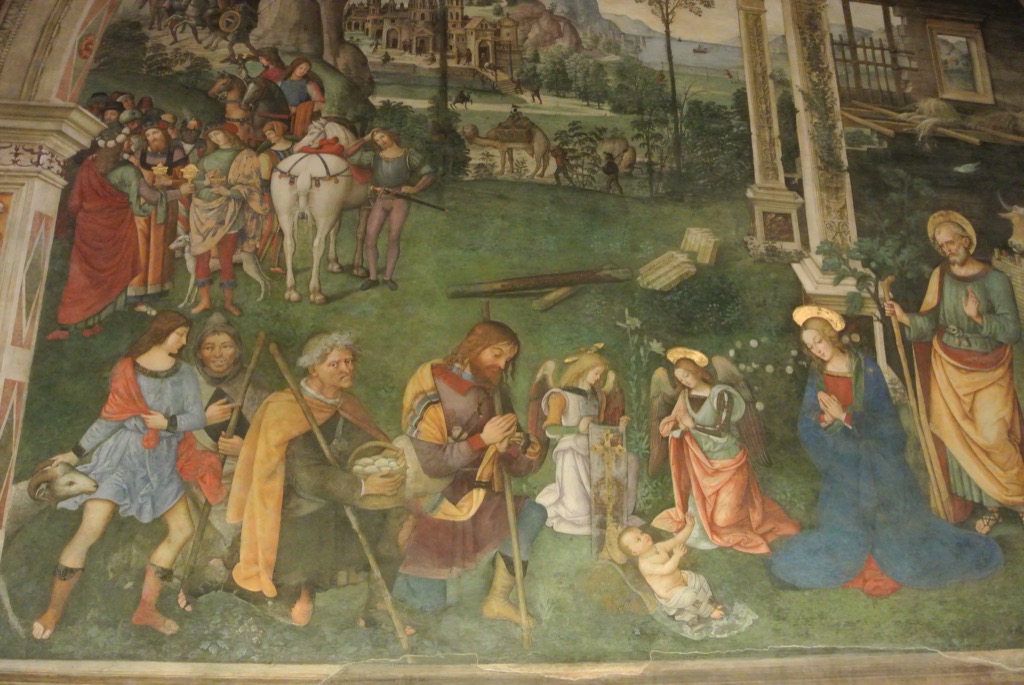 A fascinating nativity by Pinturicchio in cappella Baglioni, in Spello

Of course, Spoleto and its fortified castle of la Rocca, which was just restored, is overwhelming. The size of the rooms give a good idea of the power of the Lombards. The Duomo of Santa Maria Assunta and its frescoes by Filippino Lippi are a pure joy. 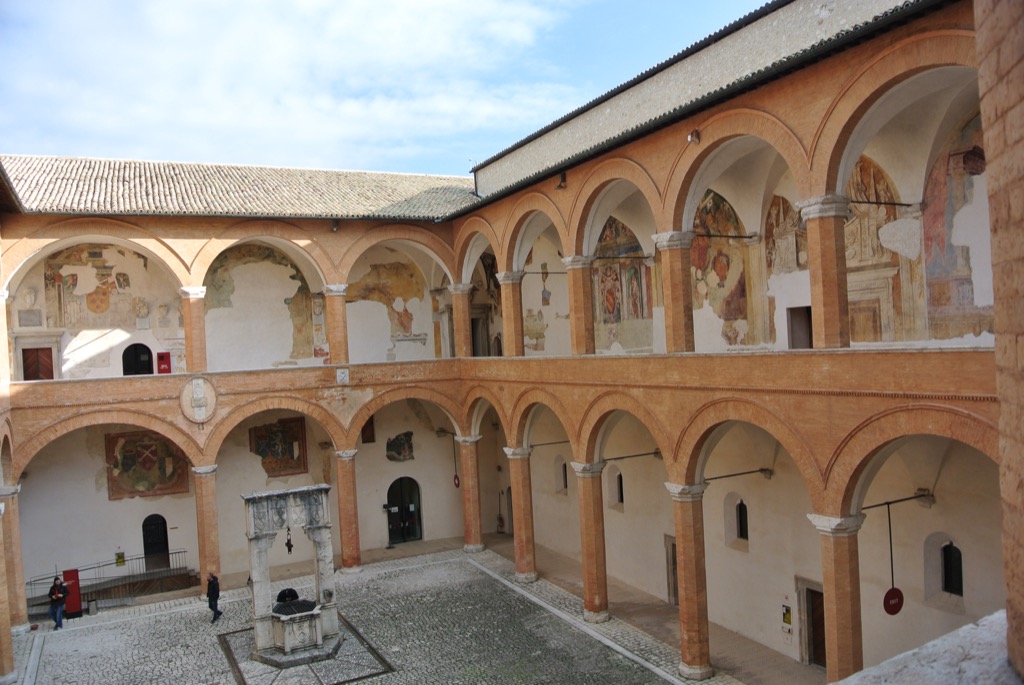 In Spoleto, the fort of la Rocca shows the wealth and power of the Lombards when it was built in 1370

Every little town is built on the hills, and streets go up and up endlessly, so wear good shoes! The color of the stone is a pale pink giving each church and house a soft and luminous touch. The wealth of the region comes from the roman roads which crossed from the Adriatic coast to Florence and Rome, thus encouraging trade. 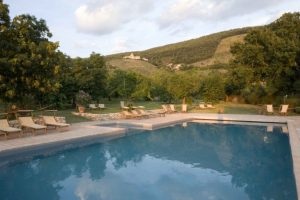 The swimming pool with old St Christopher’s church above

There is a happiness in Italian life that cannot be explained. Every meal is a feast with the restaurant owner narrating the menu as if it were a novel. Nothing is a problem, all can be solved. And the simplest food is delicious.

This is exactly the case at Borgo della Marmotta, the village of 12 rooms and 7 apartments created in Poreta. Everything was designed in 2002 and many wedding parties or birthdays take place in the enchanted garden which surrounds the large natural pool. 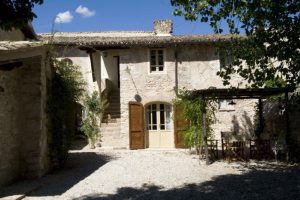 Borgo della Marmotta has 12 bedrooms and 7 apartments, all decorated with utter refinement

Tickets to Spoleto’s opera festival are available as well as yoga and cooking classes. But mostly, it is the lifestyle of country gentry that you are getting into, when staying there. The fabulous local food of gnocchi’s and stuffed quails (in winter), lentil soups and all sorts of pastas makes everyone happy. I personally loved eating my first kakis, handpicked in the garden… 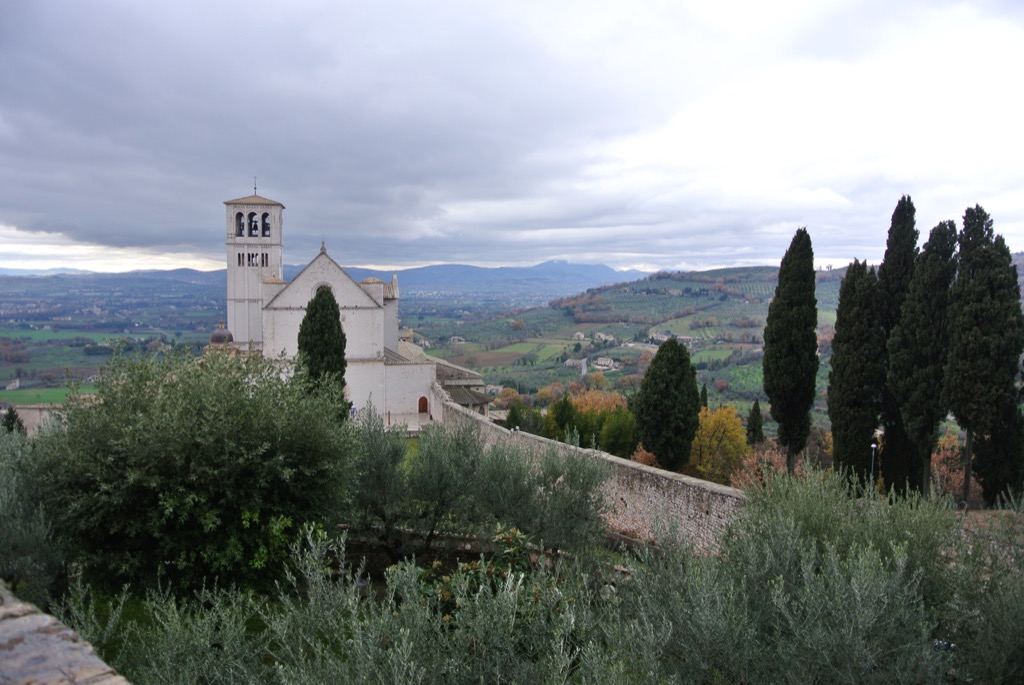 Assisi, the stunning basilica with its frescoes and its fervor is half an hour away

In the summer each little town has a festival, including Lake Trasimene where Angela Hewitt holds a piano festival and Macerata, its opera festival. Umbria is heavenly in all seasons and I just discovered that Poreta is the nucleus of it. (the hotel is open from Easter to October) 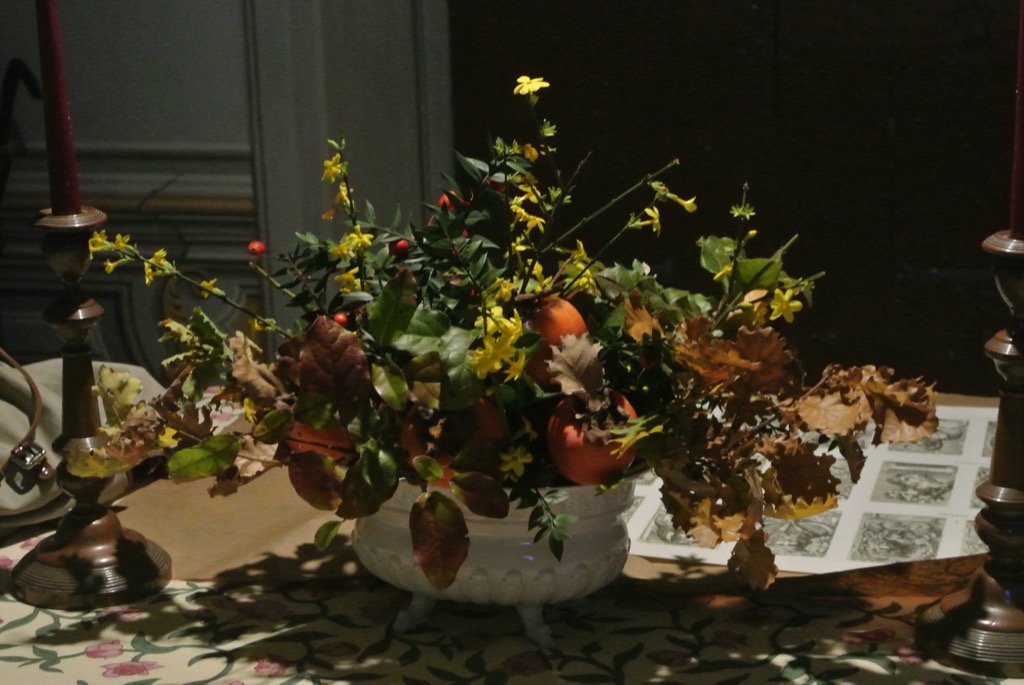 2 Comments on “Starting the year in beautiful Umbria”