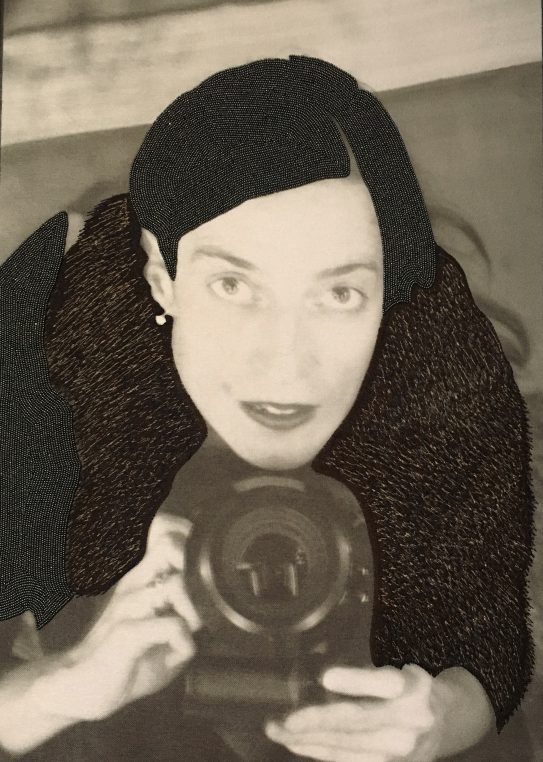 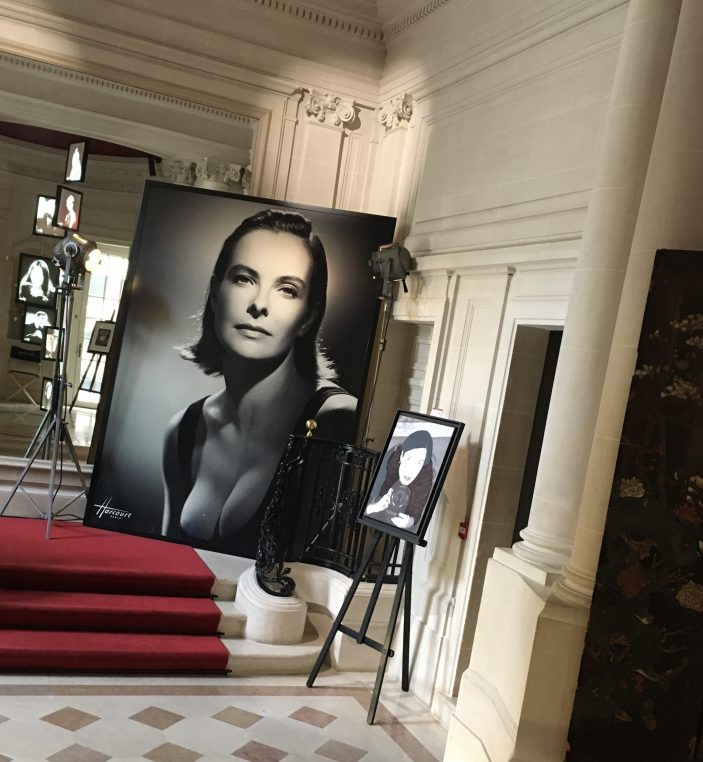 I had never visited Studio Harcourt, the famous black and white photo studio where all the stars have their portraits shot. And so it was a true pleasure to walk into the sumptuous Hotel Particulier of 6 rue de Lota, located in the posh 16 th arrondissement, just off rue de Longchamp. The occasion was to see the exhibition of embroidered photos “Galerie de Portraits” by Aurélie Mathigot, organized by maison parisienne, which is visible at the studio until June. 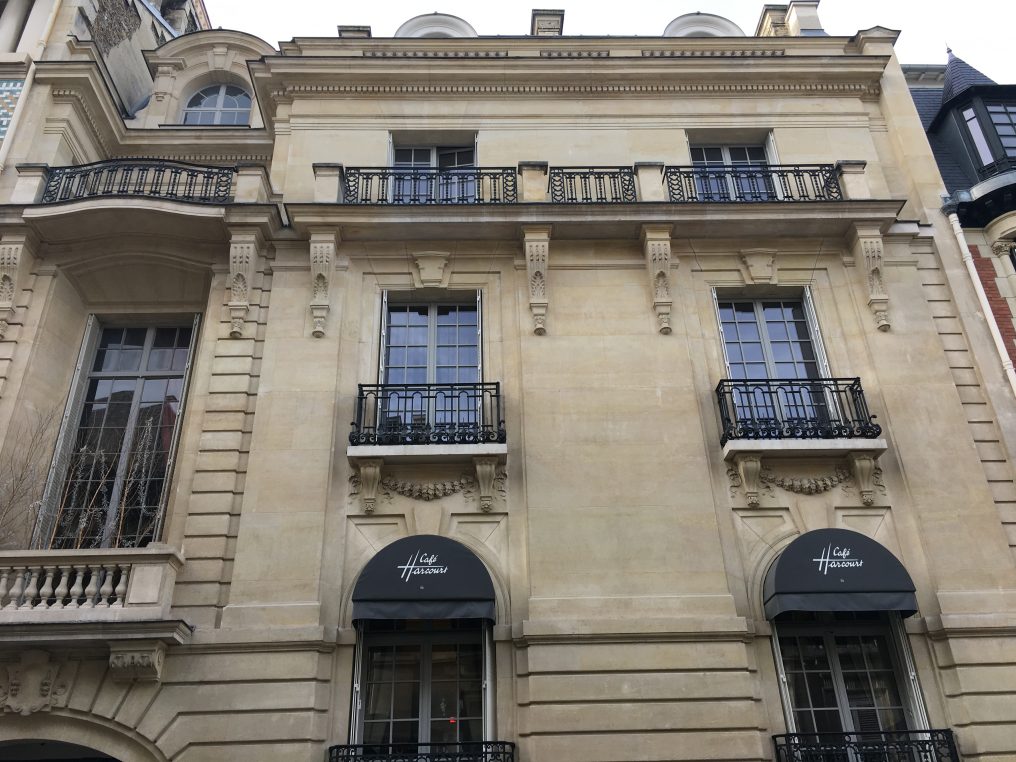 The façade of the stupendous hotel particulier built in 1894 for the Hottinguer: it also hosts a café in normal times

The street itself is interesting: it is only 130 m long and was named in 1894 after the Chilean mining town of Lota where the coal magnate Cousiño owned a house on n°2. Across the street is the United Arab Emirate’s consulate. At n° 5 the Romanian born poet Paul Celan lived in his thirties, from 1952 to 1955  and n°6, where studio Harcourt is, was built by Charles Breddendilhe for the Hottinguer family. Once you walk up the stairs of the house, you feel the weight of history as much as the tradition of Harcourt photographs which always have a special lighting. Aurélie Mathigot has used this very special place to exhibit fifty unique embroidered portraits. The visit is a wonderful walk into her recreated dream world. 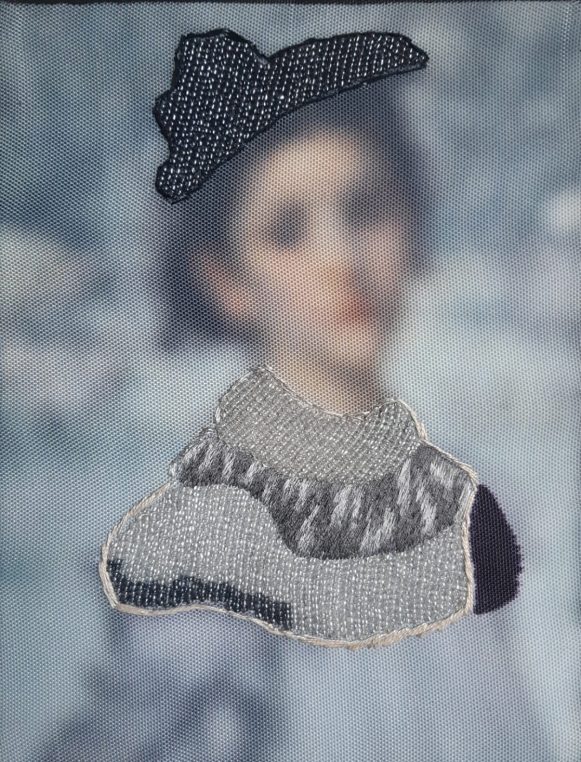 Behind the show stands the association of maison parisienne, her gallery,  and Studio Harcourt, a new example of collaboration between a commercial space and Florence Guillier-Bernard who promotes young French creators in itinerant spaces. Her latest show room was an apartment on boulevard Malesherbes which has been sold. One of her brilliant wood carver Pierre Renart, had in fact designed five years ago, the furniture for Café Harcourt, which in normal times serves lunch. So there was already a connection. 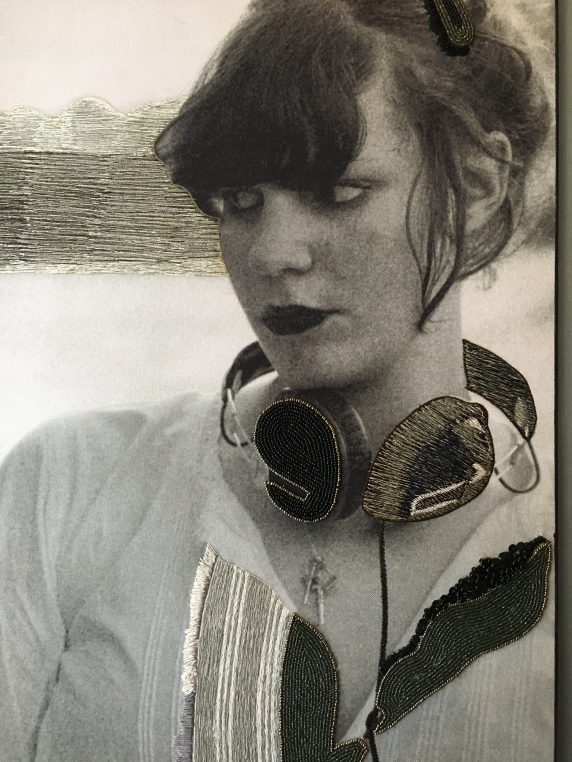 “My Beauty”, photo printed on a canvas and embroidered with thread and pearls

The artist’s technique is to print photographs (old or new) on a canvas and embroider them like a tapestry with different medium like silver thread, all kinds of beads and wool or silk. There is a series of pictures of fashion shows, where she embroidered couture dresses. I personally prefer her portraits in black and white or color. Another development of her art are her suspensions sculpted in floated wood of multiple cameras, which she brought back from Portugal. Another tribute to photography and to Harcourt. 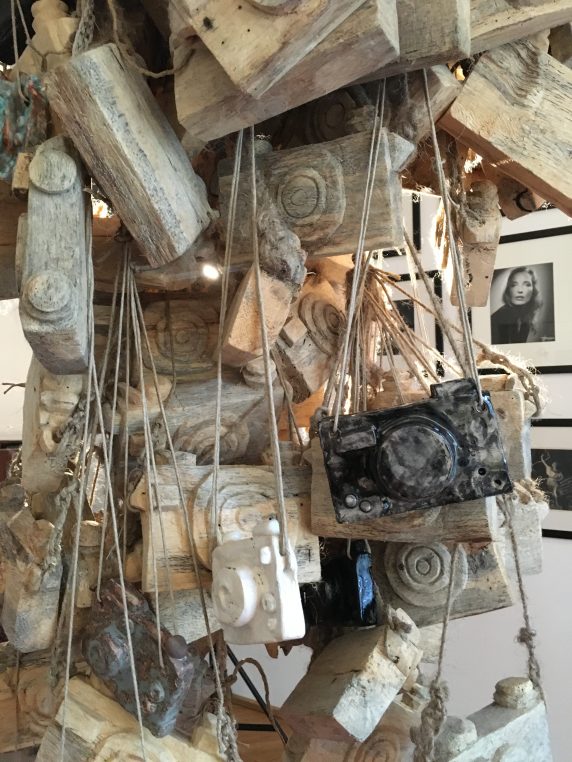 Detail of “Shooting” the sculpture in floated wood cameras

This exhibition which lasts until June is a fantastic response to confinement and lockdown. Thanks to the reactivity of Harcourt studios and maison parisienne, a show can still take place in complete legality and safety. You need to book through contact@maisonparisienne.fr or on the phone at 0620485896 to visit the exhibition from 11 am to 5 pm at Studio Harcourt, 6 rue de Lota.

And you can have your portrait shot on the premises at Studio Harcourt, by one of the 10 photographers who work there regularly. The cost of a photograph with a tow hour make up session is 1995€.

One Comment on “Studio Harcourt is well and alive, and OPEN!”