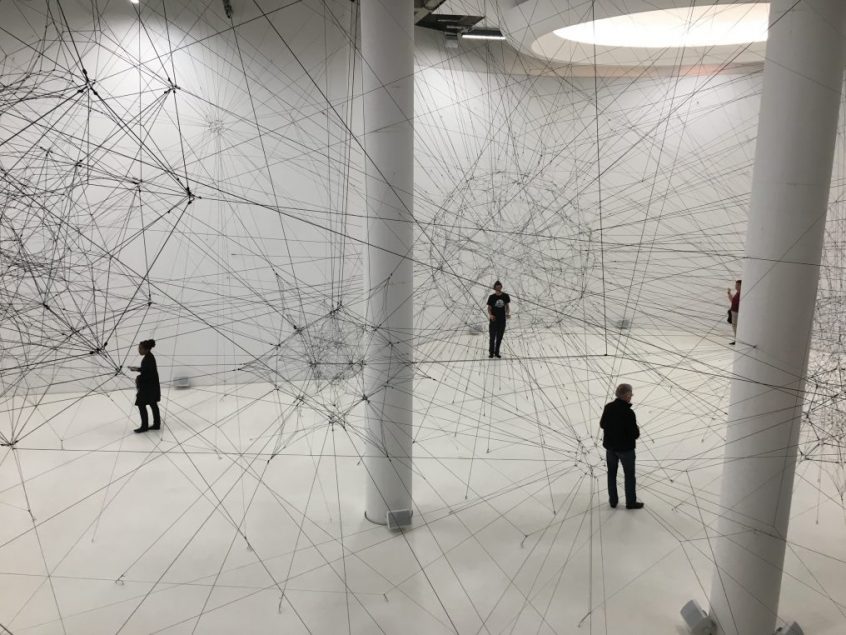 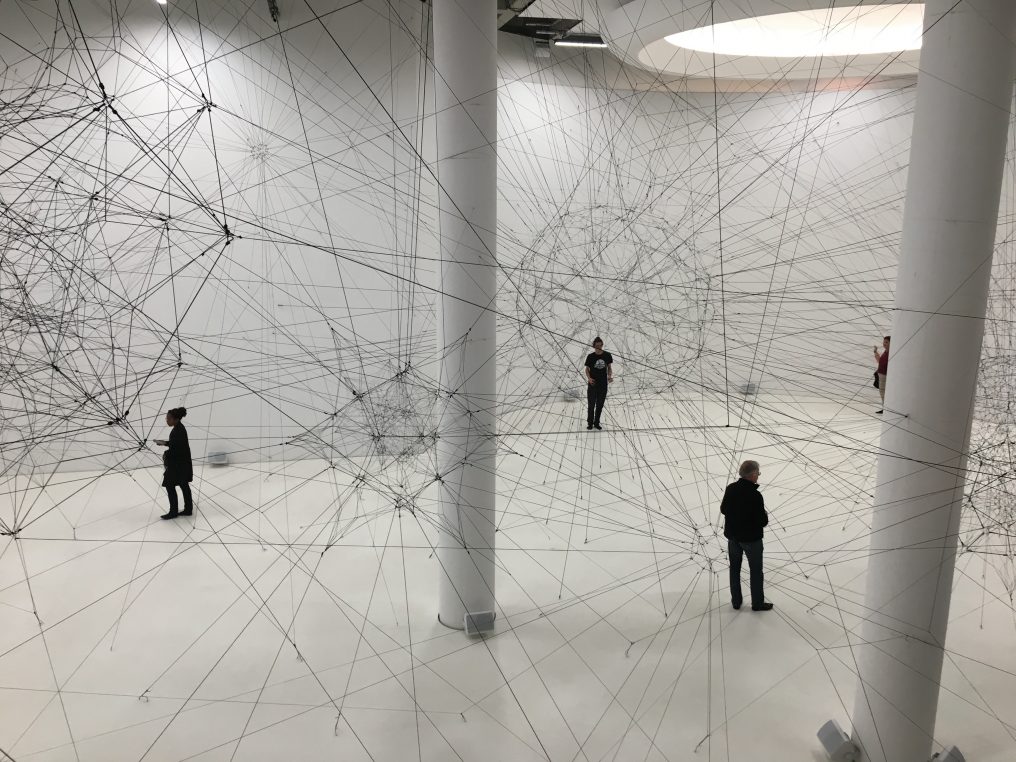 What do Japanese architect Tadao Ando, Argentinian artist Tomas Saraceno and French chef Thierry Marx have in common? They draw young urban art lovers in masses. And it is a duplicated pleasure to see how 25-30 years old crowd the Pompidou center, the Palais de Tokyo and restaurant “Marxito” on rue Jean Mermoz, with their energy, their red lipstick and their thirst for a new clean planet. 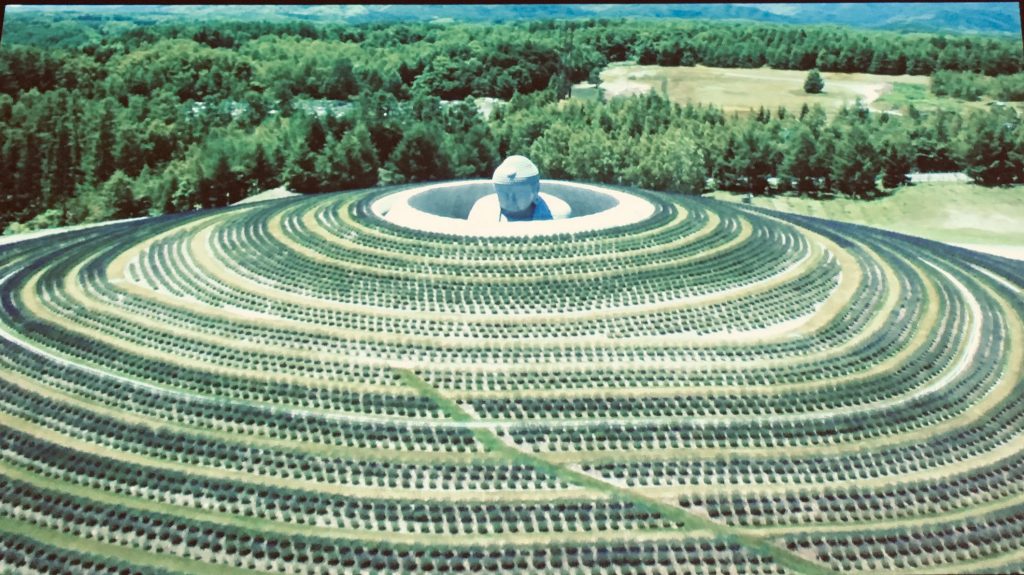 I wanted to take an American friend to see the Tadao Ando exhibition at Beaubourg and was very surprised to see that we had to wait a few minutes to enter the show. It was crowded on a Monday afternoon with hundreds of architecture students and young professionals, who each spent hours in front of the luxurious models in cork, the films and sketches that the Japanese master had lent for the show.

Tadao Ando is very much admired in France partly because of his museums on the island of Naoshima but also because French businessman and collector François Pinault has now used his talents twice in Venice at Palazzo Grassi and at Dogana del mare, and a third time for the future Fondation Pinault at Bourse du Commerce, which opens in 2020 in Paris. 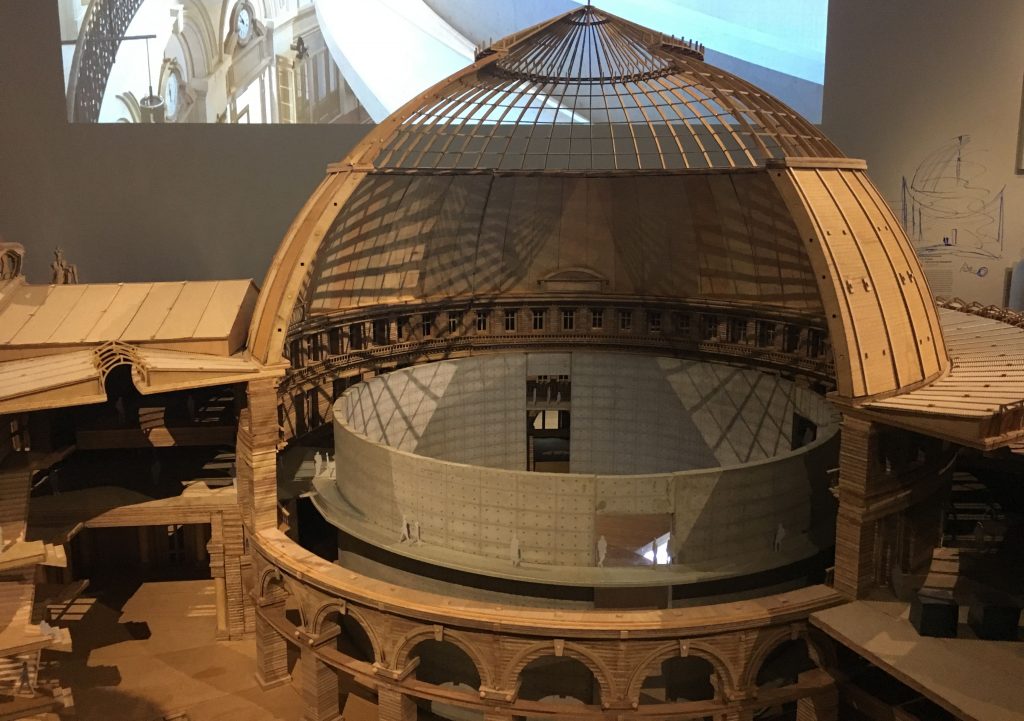 For Bourse du Commerce, future Fondation Pinault in Paris, Tadao Ando is restructuring the inside to house the large art collection

There was a very electrical  ambiance in the semi dark room on the ground floor of the Pompidou center, filled with his projects of the Church of Light 1989, Benesse House in Naoshima, 1992, the Hill of Buddha 2012, the Row House, 1976… Pritzker Price laureate 1995, Tadao Ando works mostly with smooth concrete to which he adds, water, light and vegetation.

I particularly like his contrasted grey and green projects. He advocates pure abstract geometric shapes which fit into existing historical buildings like in Venice or in Paris, and remodels nature like many of his Japanese park plans. There are fifty different projects in the show which is entitled “The Challenge”, including the never built Memorial to 9/11. Do not miss it (Centre Pompidou, until December 31). 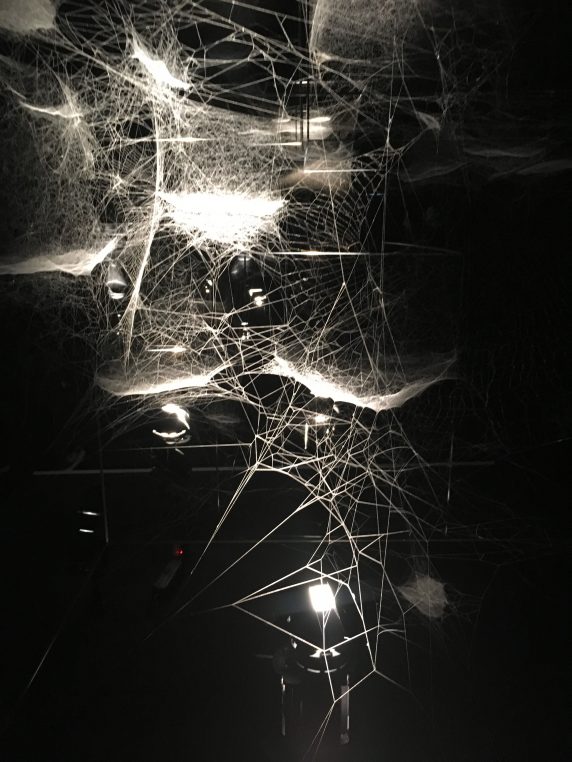 “ON AIR” is the unique association of scientists, musicians, philosophers and political activists who reflect with Tomas Saraceno on the influence of human life on the ecosystem. This sounds awful but the result is fantastic. At Palais de Tokyo, you enter a dark tunnel with just enough light to allow you to walk and then appears a multitude of lit spiderwebs. The details of the creation are fascinating.

One work, called “Webs of at-tent(s)ion” is made of 76 different webs which vibrate and create sounds. Another room stages balloons from which a movable a pen draws on the ground. The whole performance is spectacular and very successful with the public. (Until January 6 at Palais de Tokyo). 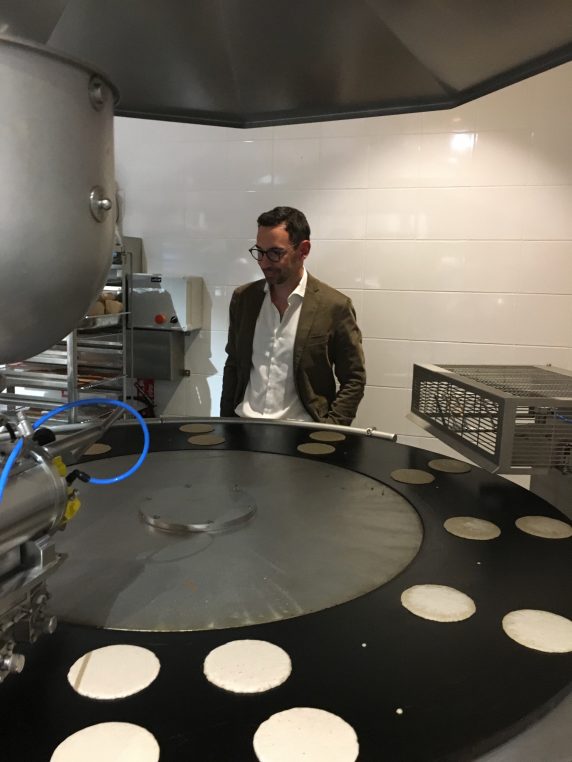 Christophe Bruel  is the inventor of this new pancake machine at Marxito.

At “Marxito”, star chef Thierry Marx has developed a new concept with three investors. Delicious little pancakes are filled with salmon or pastrami and salad, guacamole or marinated aubergines, matcha, chocolate or just a light cream for dessert. You order when you enter the premises and sit in a diner type pink room at the bottom of the Champs Elysées. The staff is super friendly, the wait is short and you can either eat in the fifty seat dining room or take out. 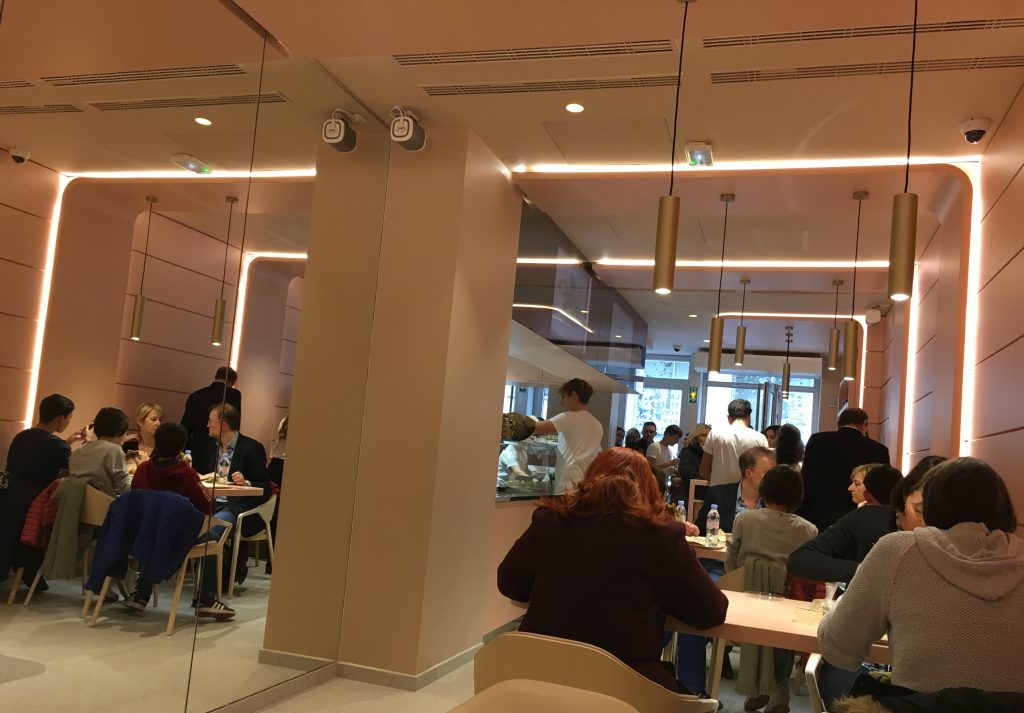 The pink decor was conceived by Ora ïto

I tasted the smoked salmon (12€), avocado and Japanese radish with miso parsley and loved it. All ingredients are organic of course! and slightly influenced by Japanese Dorayaki. The pastrami and onion marxito is the more filling (13€) and there are two vegetarian choices, Smoky mozzarella and Avocado heaven.

Salads are on the side: the quinoa with grilled almonds, pomegranate, peas and wasabi is excellent. The menu with a salted and a sweet marxito and a salad is 17€. Soft drinks, teas and organic cocktails are available as well as cider. 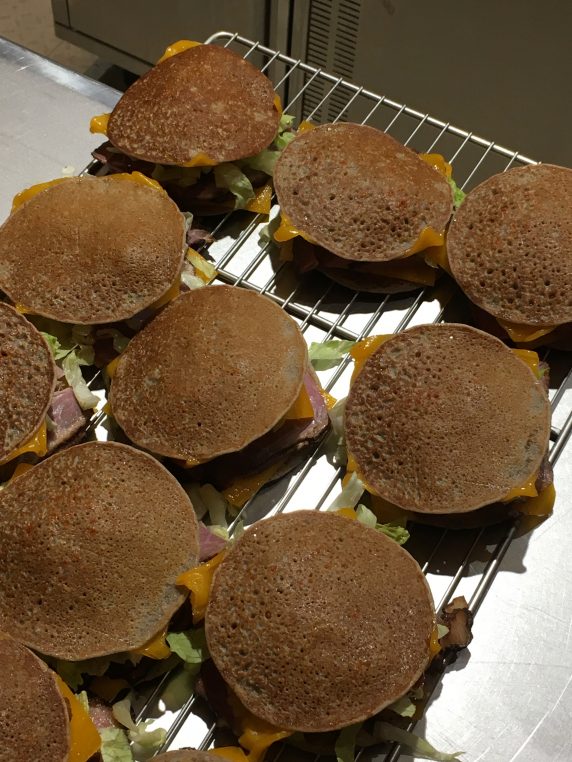 The pastrami marxito is delicious

For dessert, there is a Matcha and green tea version, a chocolate and a blackcurrent with raspberry.  I would recommend that you choose different pieces and share with a friend.

Yesterday on opening day, the line was long but fluid and everyone, (young and older)  had sparkles in the eye. The place is fun, jolly, and it offers a nice distraction at lunch time. Open from 8.30 am for breakfast (with egg Marx morning and granola) to 7 pm. 1 bis rue Jean Mermoz and take out to order: 01 47 20 92 02. 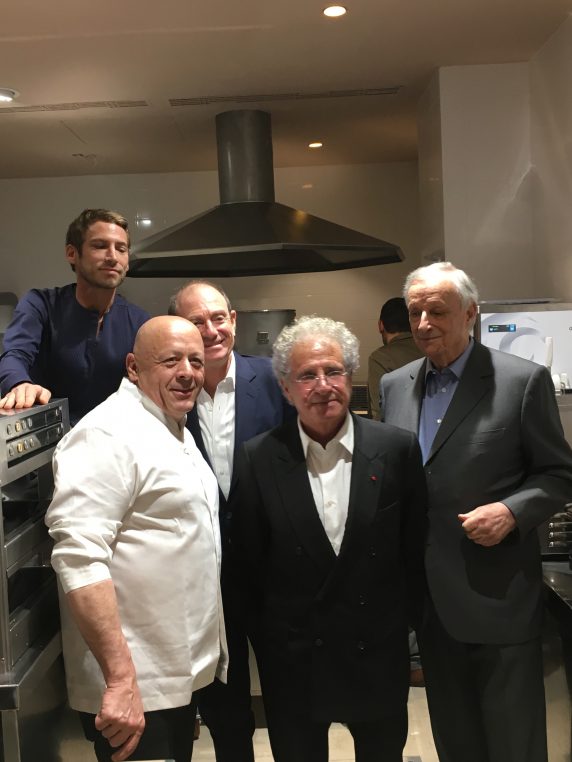 The inauguration of Marxito was attended by the Mayor of the 8 th arrondissement who does not miss an event and she saluted Thierry Marx who also opened a successful boulangerie on rue de Laborde at Saint Augustin. I must admit that his baguette is very superior. A second Marxito should also open next year in Paris. 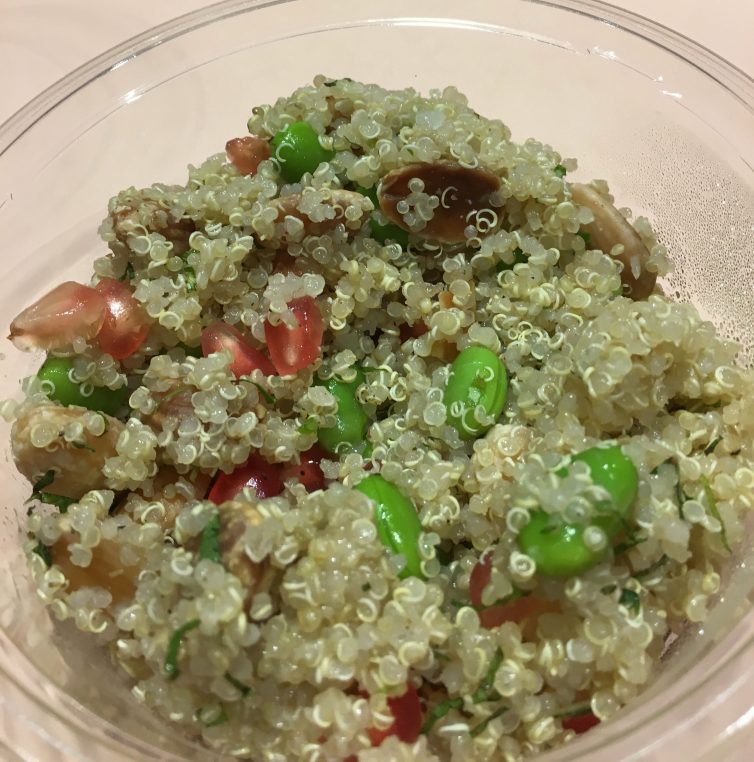 The quinoa salad is delicious