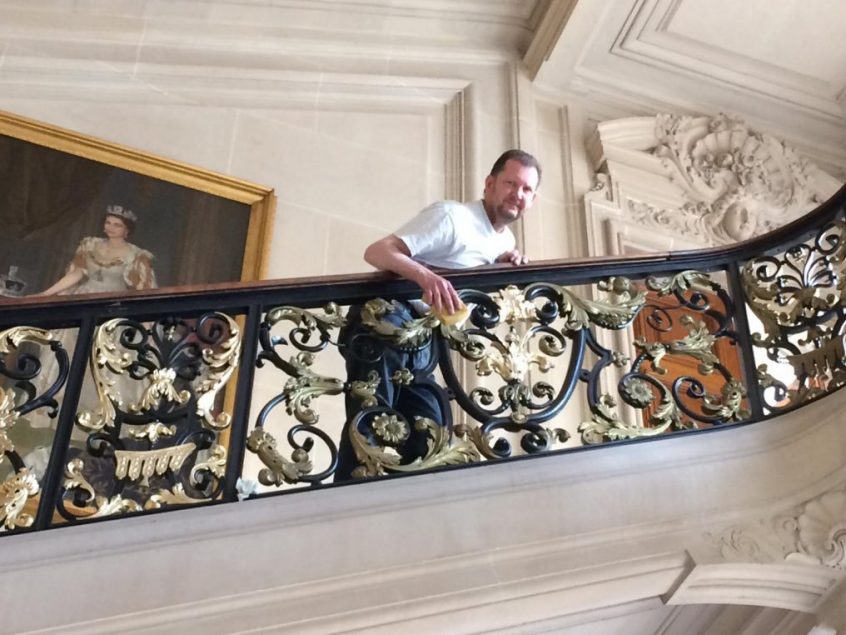 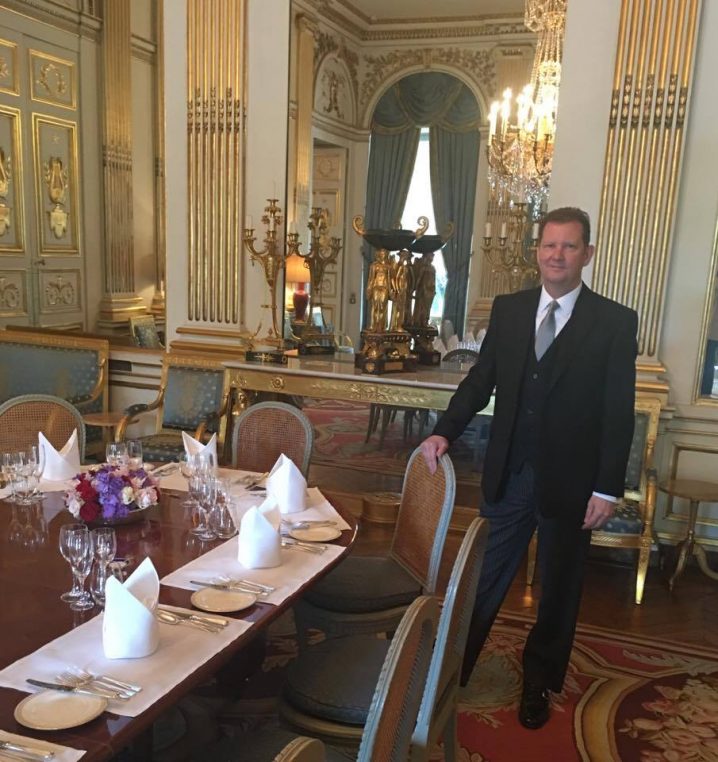 I have known Ben Newick, the head butler at the British Embassy in Paris, for thirty years (when Michael Jay was ambassador) and he sent me a message this week. Since the beginning of the confinement, he has attempted to clean the balustrade of the main 1850 staircase, over two landings and five flights, in what used to be the bankers Pereire‘s  house and is now the Chancery. This represents thirty five meters of gilt bronze. It takes two hours to clean one meter. This is a challenge that he dedicates to the staff at Hôpital Foch in Suresnes, where he was operated on six years ago. He has already raised 2 000€ and you can help him on this link. 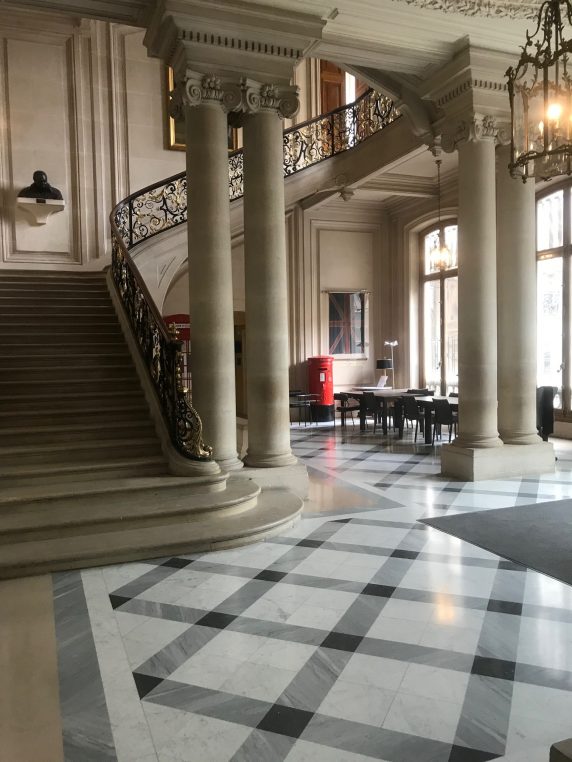 Hôtel de Chevalier was built in 1714, but was remodeled by architect Alfred Armand at the height of the Pereire brothers’ fame, when they acquired it in 1855. Armand had already built a number of train stations (immortalized by the Impressionists) for them, as well as hotels in Paris near the stations. This dynasty of bankers were competing with the Rothschilds to finance railways and develop mining. 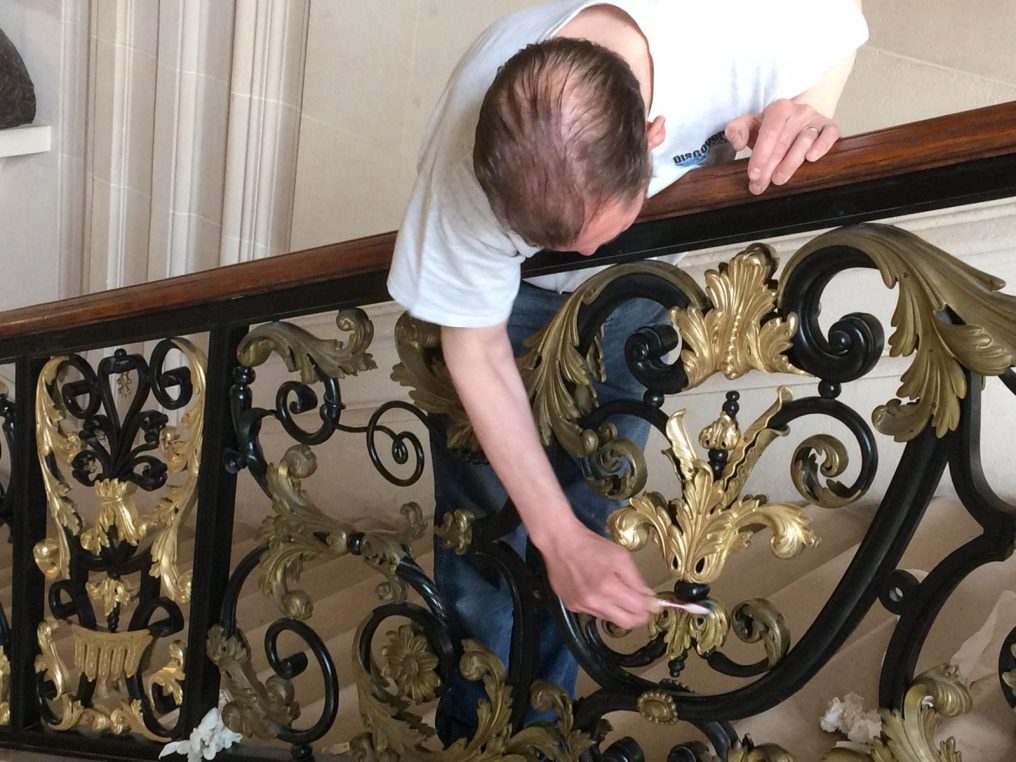 Ben Newick uses a toothbrush soap and water: it takes two hours to clean and then polish every meter of the balustrade

Jacob Rodrigues Pereira, a Portuguese Jew who emigrated to France in 1741, and a translator at Louis XVth court, established the family. Later his grandsons Emile and Isaac became major financiers of the 19 th century industrial development and in 1881, their heir Eugène, started Banque Transatlantique. His granddaughter, Noémie Halphen, eventually married Maurice de Rothschild, thus finally allying the two families. She is remembered as having founded the ski resort of Mont d’Arbois in Megève and she was the mother of Edmond, who also founded his own bank. 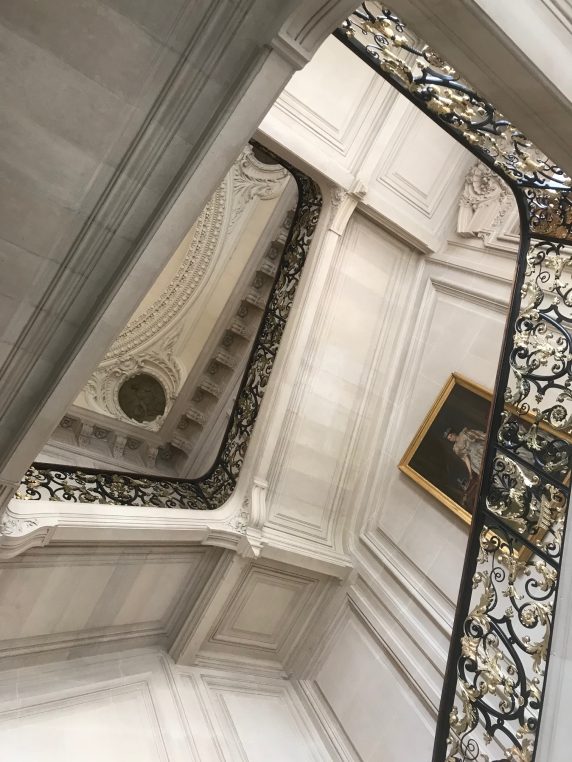 This hôtel particulier, now better known as Hôtel Pereire, is one of many situated between place Beauvau (where Hôtel de l’Elysée used to belong to the Rothschilds) and rue Boissy d’Anglas, with Cercle Interallié, which also belonged to Henri de Rothschild and the American and British residences. It was acquired in 1945 by the British government to establish its chancery next door to the famous residence, formerly Pauline Borghese’s house. Ben Newick works in both buildings. 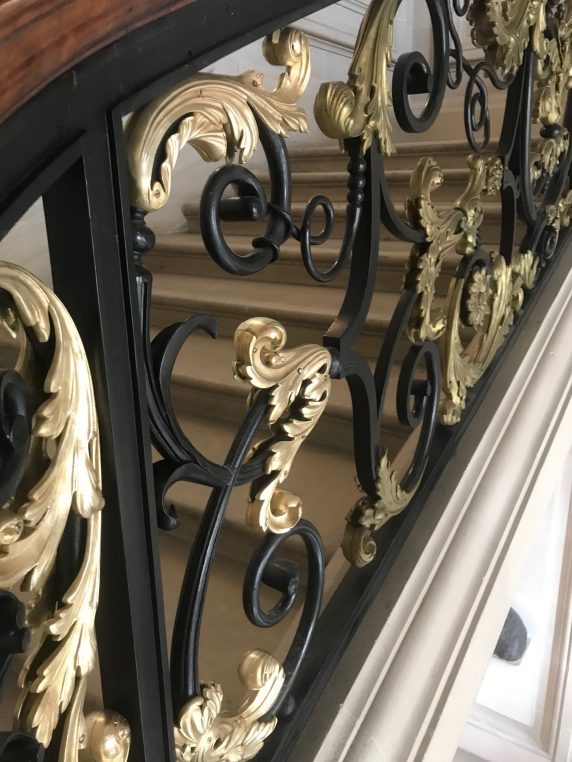 Detail of the balustrade before and after

I love this story sent by Ben. Our times of confinement have prompted extraordinary volunteering moments and this one is unique in that it allies preserving a historical monument with helping the staff of a hospital. So please, help him in giving to the Hôpital Foch in Garches on this link, the “balustrade challenge”! During normal times, Ben Newick can also organise historical visits of the British Embassy.

3 Comments on “The “balustrade challenge” at the British Embassy”