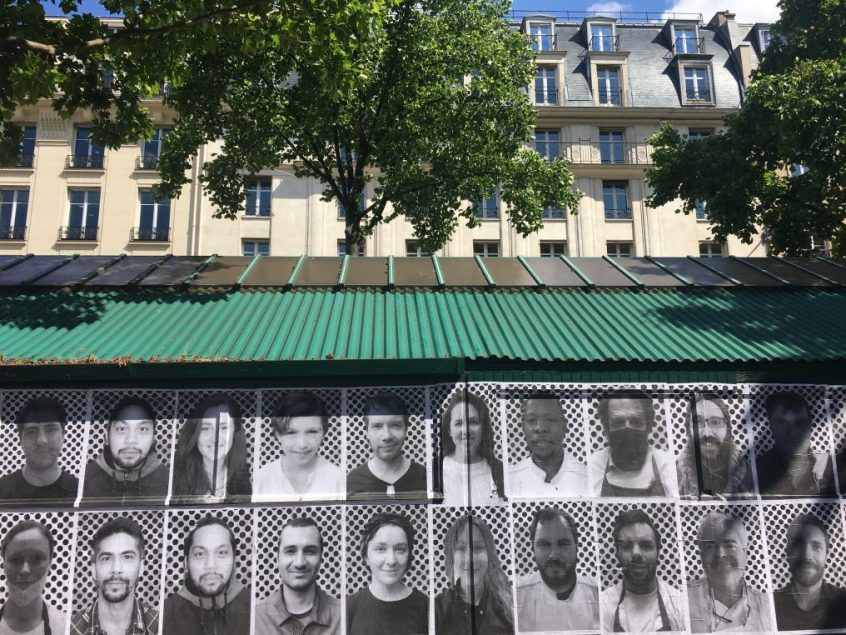 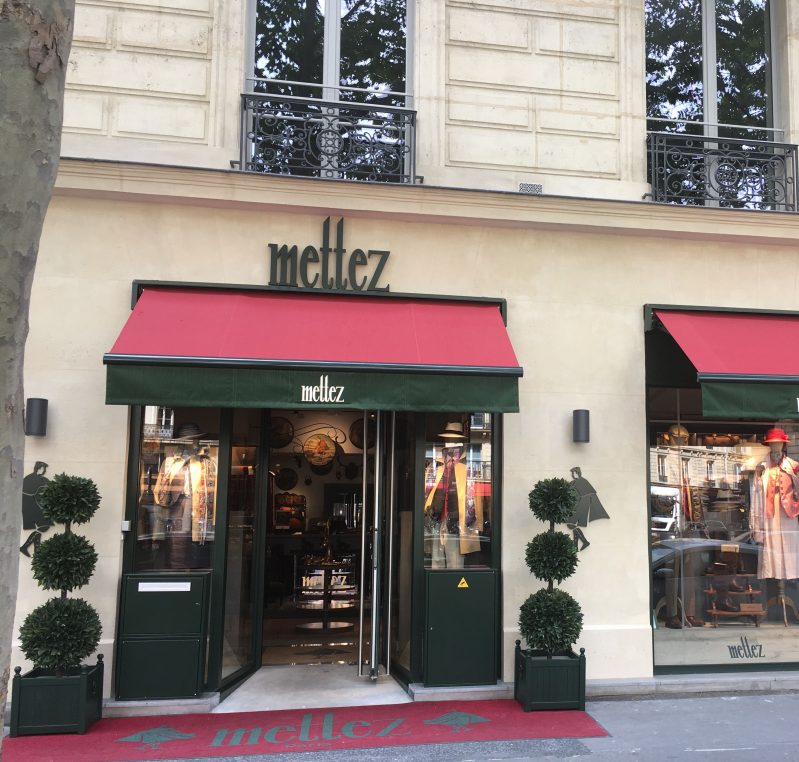 The new glamorous Mettez shop has opened on 9 bd Malesherbes

The minute I stepped outside my house without an “Attestation de déplacement provisoire ” (authorization to walk on the street…) on May 12 th, I found new wonderful events taking place in the area. On place de la Madeleine, Mettez, the Austrian hunting shop, opened new luxurious premises which reminded me of the first Ralph Lauren shops on Madison Avenue, in the last century. The owners, father Elie Jacques Francès and son, were on the sidewalk watching a few curious customers walk in. It sells the same linen and wool jackets as before, shooting equipment and hats, but everything looks more glamorous and the space is beautiful. 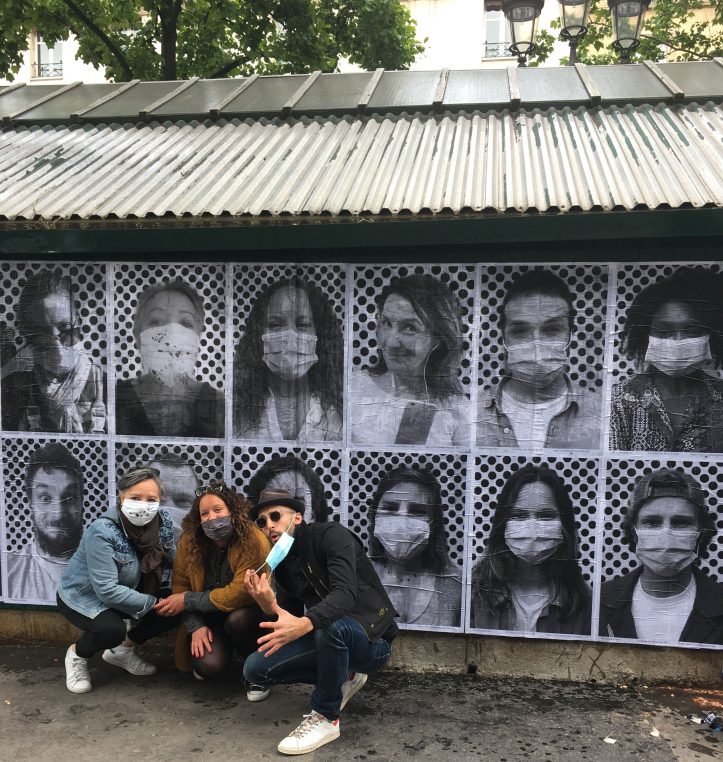 And on the other side of the church, J.R. , the famous photographer, was having a discreet happening after recovering from the virus. He has been continuously helping the volunteers who feed the homeless at the Refettorio under the Madeleine and he took photographs of everyone who helps and printed them. They were being glued on the back of the flower shops that make us so happy on the place in front of Fauchon. Everyone was having fun and wearing masks most of the time.  It was another proof by J.R. that art can save lives in all situations. By the way, I heard through the church staff, that he had become the father of a little boy with artist Prune Nourry in mid April. Congratulations J.R.! 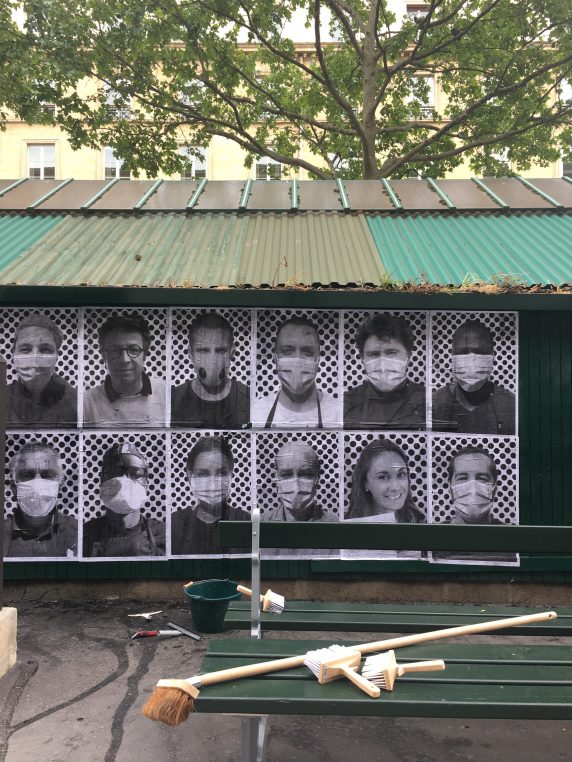 Photographed by J.R., the volunteers of Refettorio Paris

In normal times, anyone can go for lunch at the Refettorio and eat for 9€. It was decorated by J.R. and Prune Nourry. Its President, Jean François Rial is the CEO of travel agency Voyageurs du Monde and he oversees the management of the restaurant. Every evening, free meals are distributed to homeless and old people with the leftovers from more than twenty famous chefs. The motto is to feed the body and the mind with the involvement of artists, designers, architects… 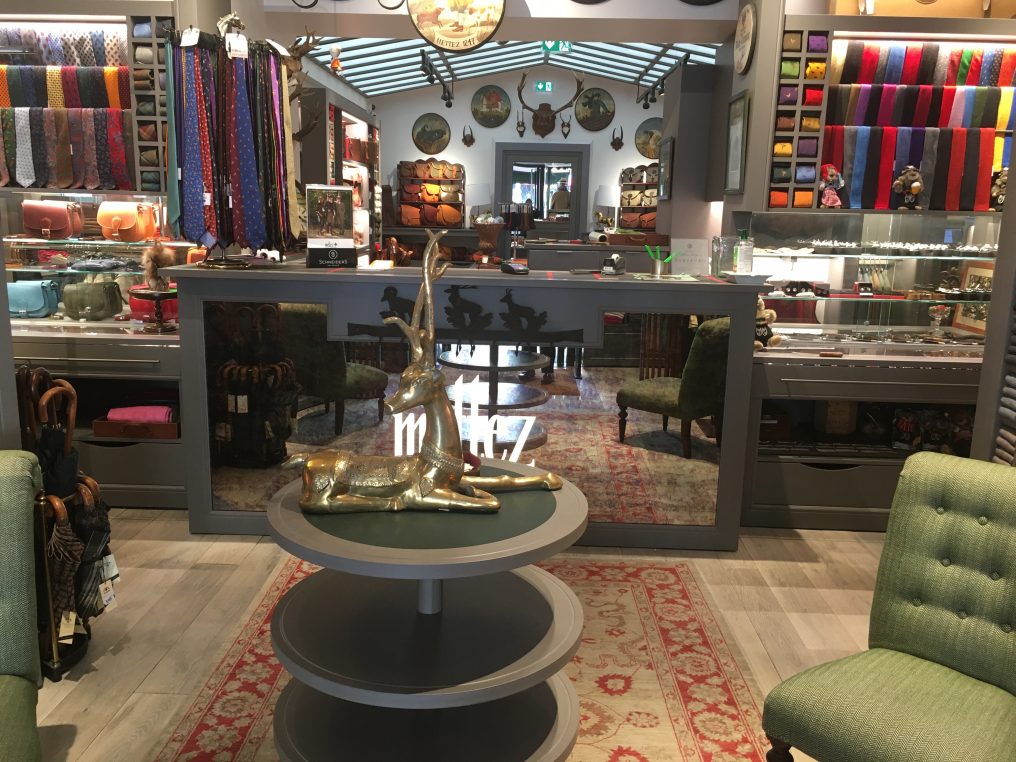 The décor inside Mettez is very warm and chic

Everyone is showing off with new masks most often black for officials (like President Macron) or colorful for young women, but I noticed it has become a new sign of social chic. There are beautiful African fabrics for some and trendy pleats for others. It is the utter snobbism to sow it oneself but if you don’t know how to sow (like me) it is easy now to acquire them on the street…

Going out to the country for the first time in two months has been a treat last week end and walking strenuously has generated body aches but what a relief! Some beaches in France have opened up and all forests are permitted. Only the parks and gardens of the city of Paris are restricted, but this is probably a revenge from the government on Mayor Hidalgo who has stupidly closed off rue de Rivoli to all cars and limos. A terrible problem for Galignani, the dream bookstore which is now alive again… And how will Hotel Meurice customers be able to get a ride when hotels reopen?

One Comment on “The day and the week after… “deconfinement””