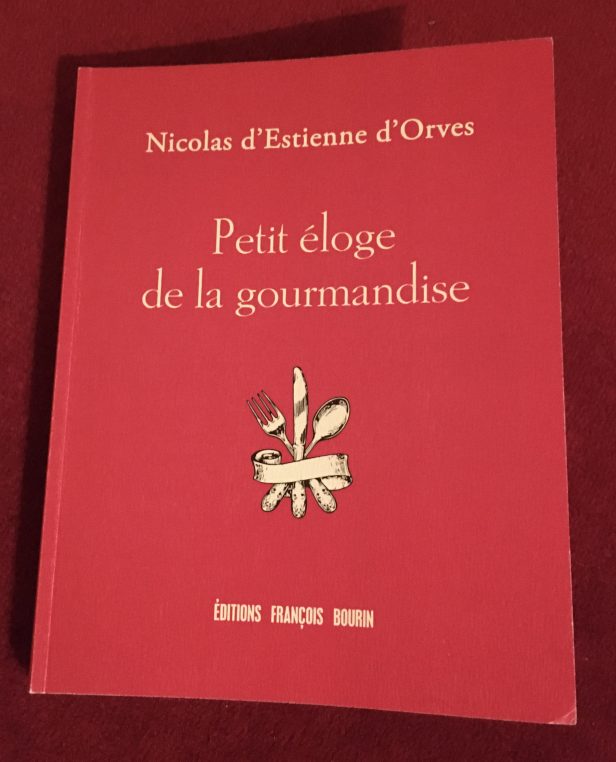 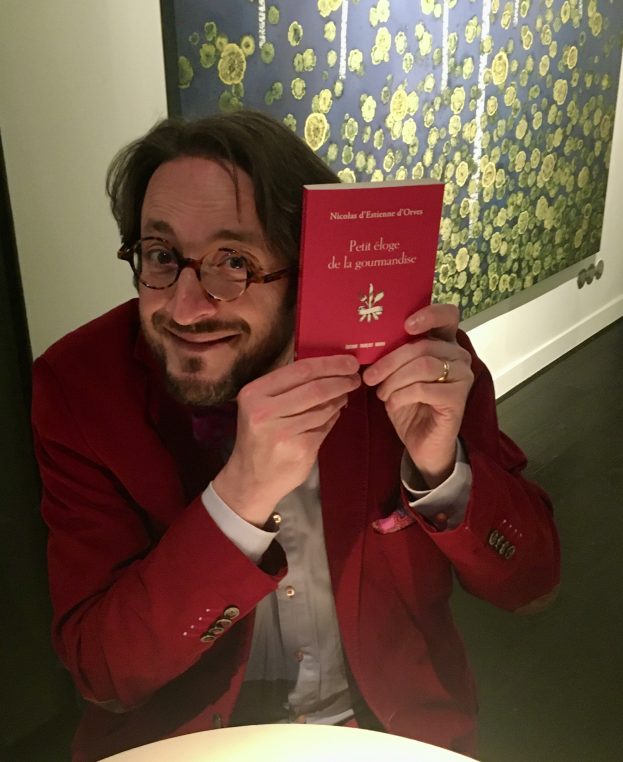 “The only good news this Thursday” mentioned the invitation to Pierre Alain Challier’s gallery at the very time that Jean Claude Fasquelle, a giant of publishing with Grasset, was being buried at Saint Germain des Prés and just before Manuel Canovas, the fabric designer’s funeral. And it was to be a literary event with lots of booze… around Nicolas d’Estienne d’Orves who publishes “Petit Eloge de la gourmandise” (in praise of gluttony) and another writer, Frédéric Beigbeder, who was launching a new organic vodka, “Le Philtre”, made with wheat in Cognac under his and his brother Charles’s supervision. So I went of course and was happy to meet the good fairy who had the idea in the first place, Ambre Rouvière, a literary editor who is friends with both authors. 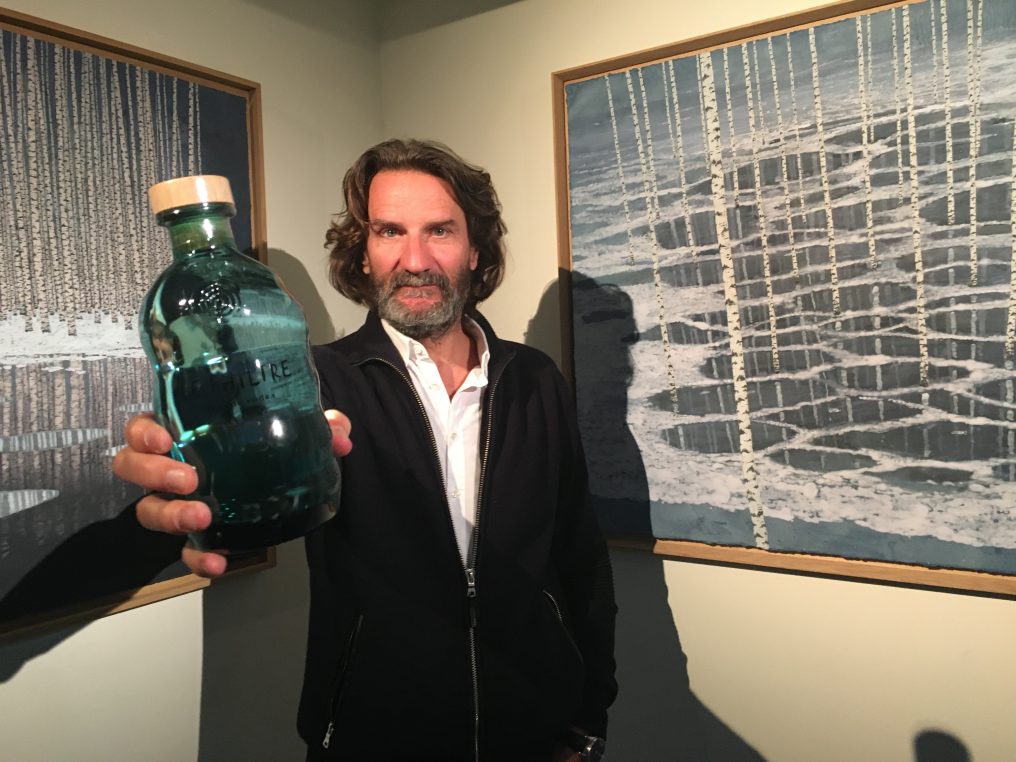 Both writers are “Enfants terribles” of literature and Frédéric Beigbeder has made a reputation for himself for being a pillar at Castel, the night club, and doing all sorts of naughty things in the past. Now that he lives in Guéthary near Biarritz, he concentrates on his writing and fabulous literary reviews for the Figaro magazine which are the only ones to be trusted among our lazy critics. He has developed this new organic vodka with his brother Charles, which is bottled in recycled glass and made with wheat and Gensac water. The different colors of blues and greens are very attractive and the shape of the bottle which looks like a baby (biberon) bottle, is perfect. I wonder if the name itself Le Philtre is meant to philter emotions? 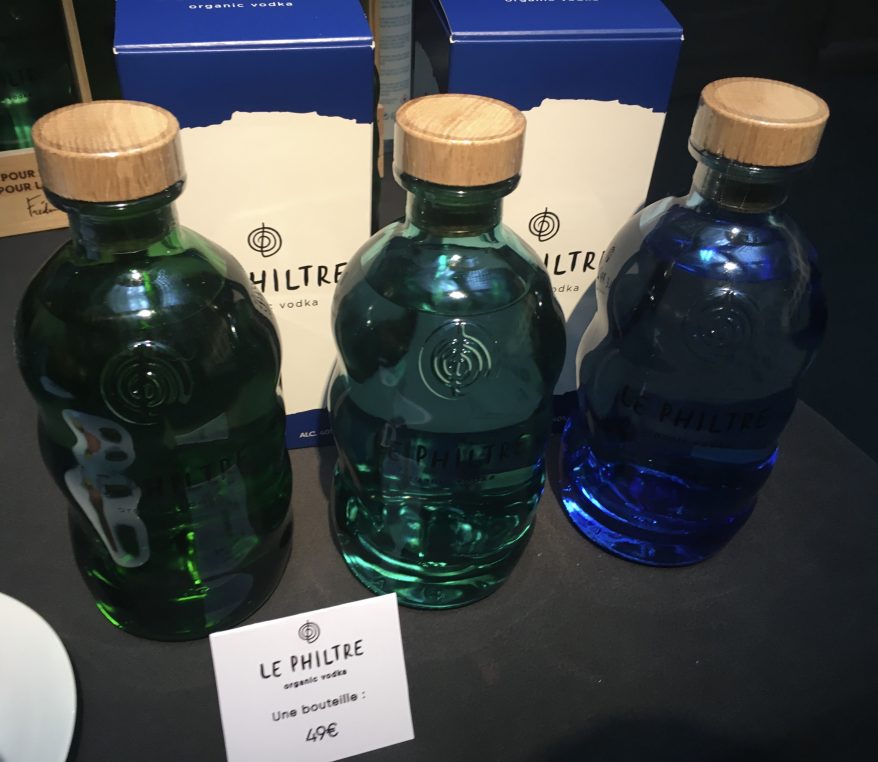 Le Philtre comes in different colors because the bottles are recycled

Nicolas d’Estienne d’Orves’ book is all about food. He starts telling about his childhood cooks at his grandparents house in Senlis, the same one in which Sting now spends much time in confinement. As a member of Club des Cent, the prestigious association of gourmet men founded in 1912, in which you are coopted by a panel of “inquisitors” who can ask you any question on cooking, wine tasting or just food, he is the most obvious writer for such a little exquisite work. He describes at length the pleasures of eating andouillette and tripes with his father when he was a child and now with his sons. The description of his 18 th birthday at Fouquet’s is hilarious and his despise for fashionable old vegetable and trendy restaurants always entertaining. I loved his first lunch at Lucas Carton at 16 where he had just enough money for the menus and none for the tips.   His first novel was about a cannibal in Paris. And fourteen more books have followed ranging from novels to essays and biographies. Nicolas is also a serious music critic and has more charm and sense of humour than anyone of his generation. I loved his bo

Ambre Rouvière had also invited a family champagne company and two Armagnac producers. The ambiance was perfect for a day of mourning. The setting for this intimate get together was the very large three story gallery of Pierre Alain Challier who is closing the marvelous exhibition of Stéphane Erouane Dumas. What fun to be with witty young men and brilliant spirits.

One Comment on “The last happy event before being lockdowned again”