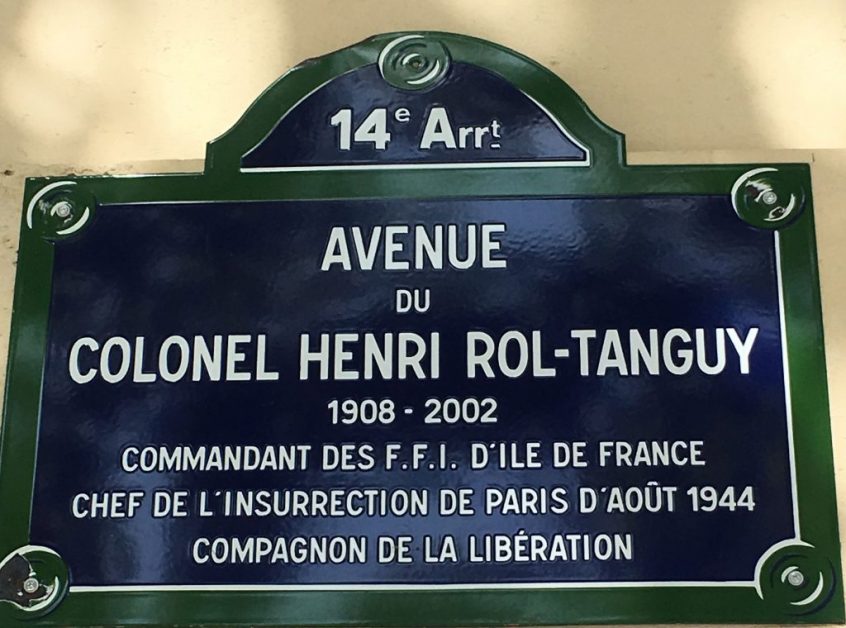 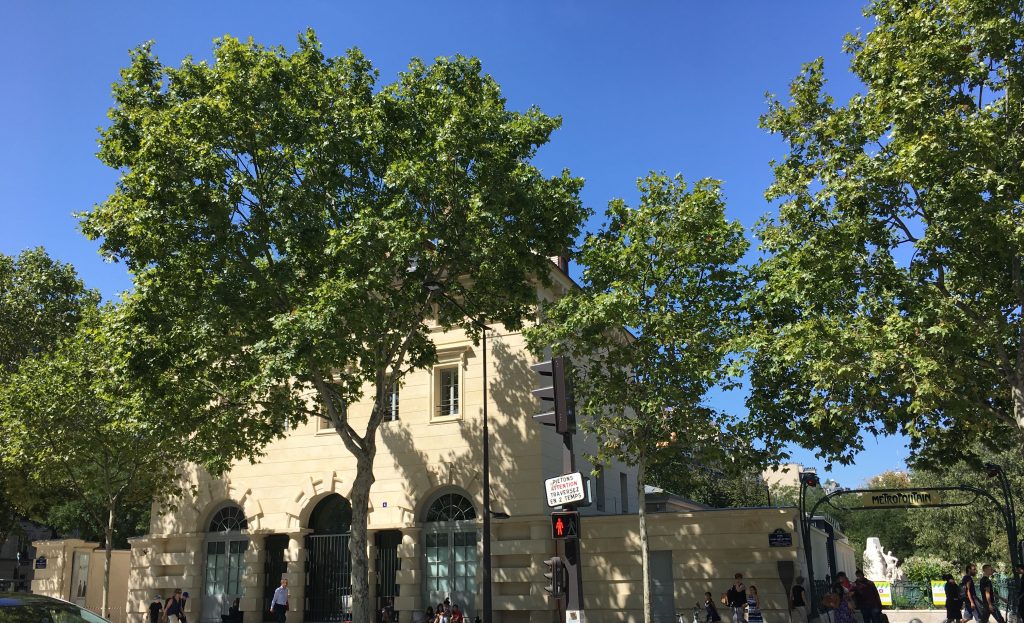 Built in 1785, the Ledoux Pavilion where the museum is based, used to be a tax collection office at the entrance of Paris, from Orléans

Général de Gaulle walking down the Champs Elysées on Saturday, August 26, 1944 in a  liberated Paris, is an image that every Frenchman has kept in mind. When in 1968, the Général was heavily contested, I remember my mother joining the demonstration and walking with millions of people of her generation, in remembrance and in support for the man who had freed our country. 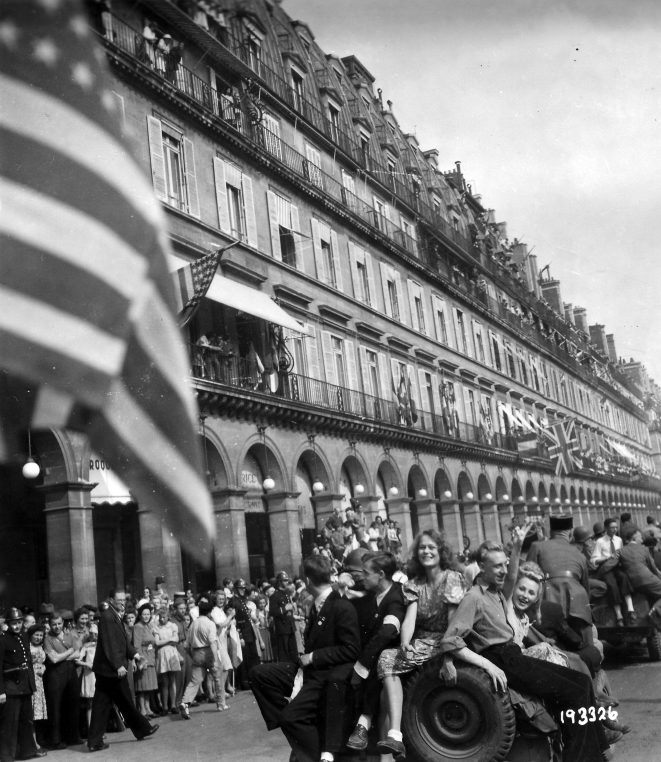 The day before, on August 25, 1944, General Leclerc de Hauteclocque and his 2ème division blindée had liberated Paris with the 4th Infantry American division. With Colonel Rol-Tanguy, who commanded the communist FFI, he signed the capitulation act by the Germans.  All of these events are now celebrated with archive films and photographs at Musée de la Libération de Paris which was inaugurated last Sunday, August 25, on Place Denfert-Rochereau to celebrate its 75 th anniversary. 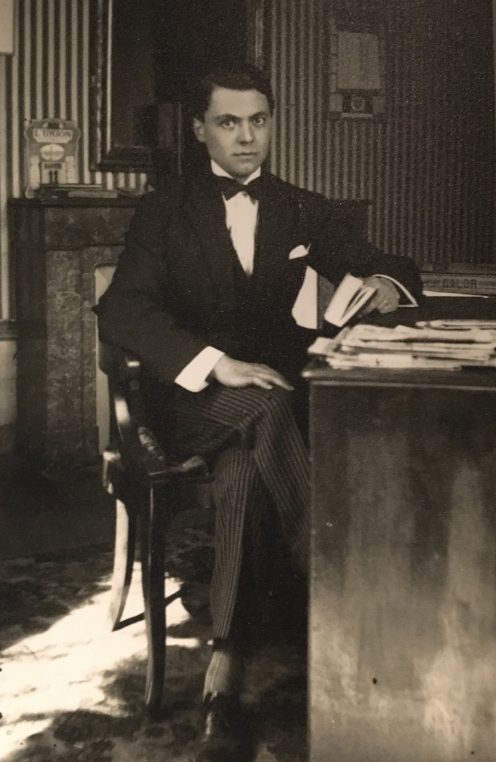 Jean Moulin in his office in Albertville ca 1926. He is the youngest Préfet in France at 26!

It is not easy to find the museum if you are not familiar with Place Denfert-Rochereau but take the entrance to the Catacombs and its long queue of visitors as a landmark. It’s just across the street, renamed avenue du Colonel Henri Rol-Tanguy in memory of the great resistant from Brittany, and Communist leader of the Paris insurrection, who had his headquarters a hundred steps below in a bunker. He died in 2002. 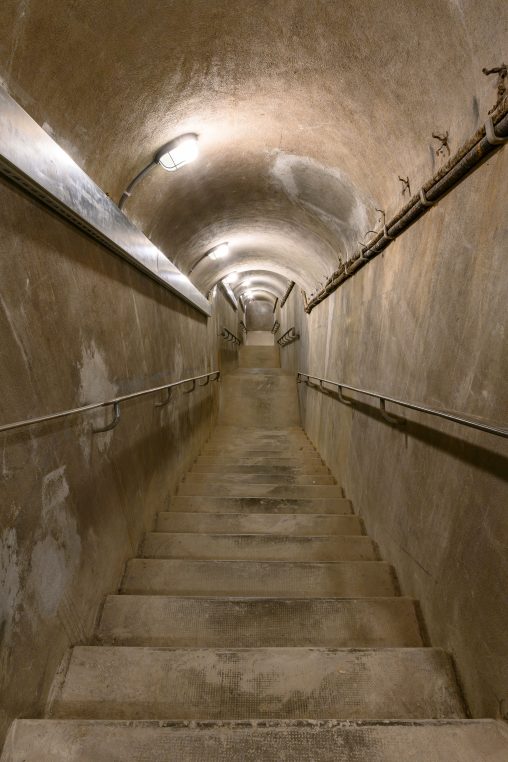 The entrance to the hundred steps to the bunker where Rol Tanguy established his insurrection headquarters, © Pierre Antoine

This building designed by Claude-Nicolas Ledoux in the late 18 th century used to be a tax barrier for everyone entering Paris from the Orléans road. The archives of Jean Moulin and Philippe de Hauteclocque (Leclerc is his first patronym), are the basis for this very didactic space, where you can see many images and objects given by resistant Antoinette Sasse, an artist and close friend of Jean Moulin. The first rooms lead you through the young years of both characters who have never met. Jean Moulin, the famous and brilliant resistant and art collector, who died tortured by the Nazis in 1943 and Philippe de Hauteclocque, who fought for de Gaulle in Africa and died in a plane crash in 1947. 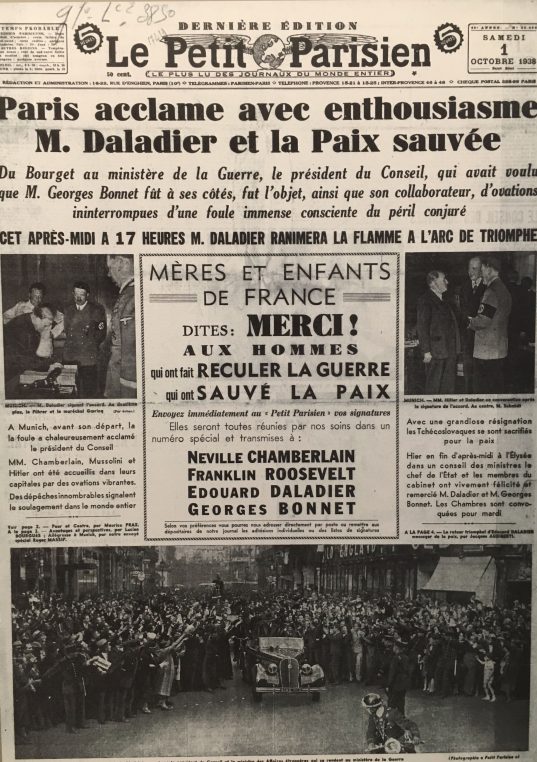 The first rooms with the press of the thirties, describe well the growth of the Nazi regime. then come the pictures of the Exode, when Parisians were fleeing south, the discussions on whether Peace should be defended at all price, including surrendering to the Germans, are very revealing of the atmosphere of the time so well described by Irene Nemirovsky in her novellas, “Suite Française”. 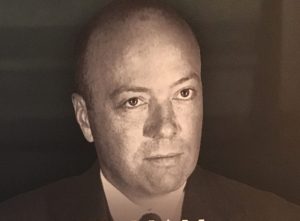 All of these documents are essentially a simple introduction to history designed for school children. Maps of the invasion are interesting as is a picture of American Ambassador, William Bullitt, a former journalist born in Philadelphia who decided to  stay in Paris against Roosevelt’s advice: “J’y suis j’y reste” and was asked by the French government to defend the city as its temporary “mayor”… He subsequently left France through Spain, after the Vichy government was established.

Also interesting are the day to day events lived through simultaneously, by General de Gaulle, Jean Moulin and Philippe de Hauteclocque in June 1940. But the choices made by historians seem arbitrary and one does not understand why such resistant is put forward and others are not mentioned. Interviews of Hélène Mordkovitch and Daniel Cordier (Moulin’s secretary) are fascinating but why were they chosen among so many other witnesses? 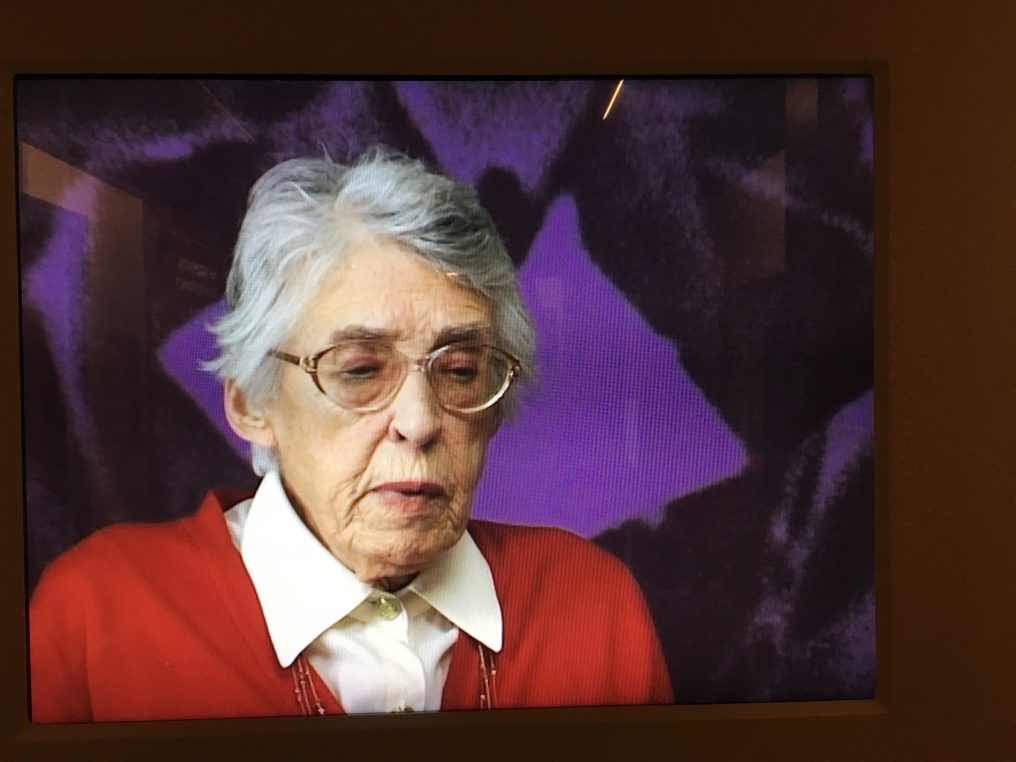 Hélène Mordkovitch is one of the fascinating heroes interviewed here

The work (20 M€ total cost and four years) done by architect Christophe Batard and scenographer Marianne Klapisch is very efficient. The place looks modern and yet, retained its historical significance. This particular site in the west of Paris near Montparnasse, makes sense especially since the Division Leclerc entered through this very spot. 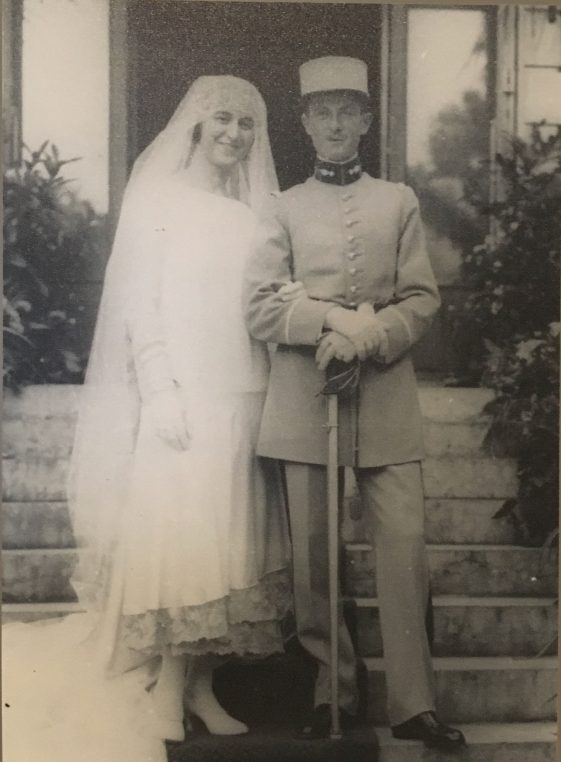 The color system of the rooms establishes the different geographical sites. A brown yellow paint for the African career of General Leclerc, a red and grey decor for the Resistance in France and Jean Moulin. The collections shown here might seem too restrictive because so many war heroes like Marie-Madeleine Fourcade (who headed a spy ring in France) are not mentioned. But the space is not that large, and a few paintings by Utrillo which belonged to Moulin are completed by donations. On September 28, anyone who wants to contribute with letters or objects of the Liberation of Paris is invited to visit the museum and show their treasures. 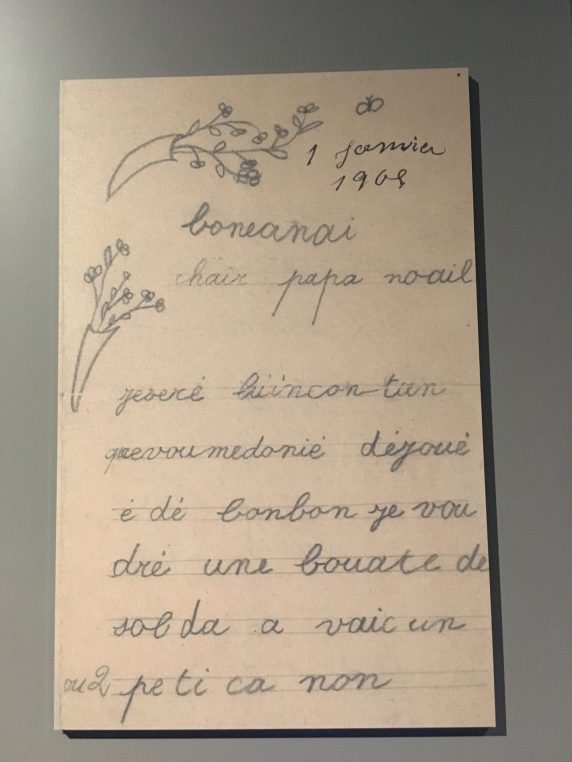 A letter to Santa Claus by Jean Moulin, age 6

The part I preferred is a series of short films shot with a hidden camera on a motorbike by Albert Mahuzier, a young director who did not hesitate to film British pilots walking along the Gestapo on the Trocadero, and films the Prison insurrection from Town hall in August 44. A precious testimony.

The Scientific committee of the museum, presided by André Kaspi, includes 29 famous historians and University professors and yet one leaves the premises a little disappointed by the shallowness of the information. Of course, the place which is part of Paris Musées,  is meant as a very popular place but there is a feeling of simplicity which is irritating. 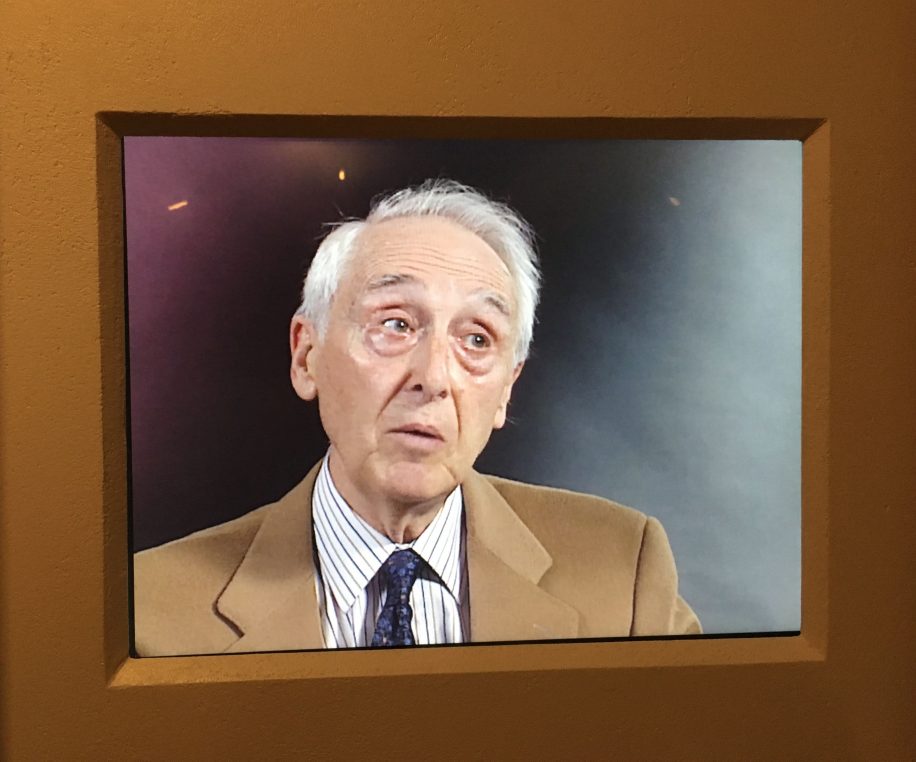 Daniel Cordier, one of the last witness of the Resistance years published a fabulous book called “Alias Caracalla”

I learned a lot about the role of communists and Leclerc’s fight in Africa with virtually no weapons, but was disappointed by the Parisian information. Which could of course change in the future. 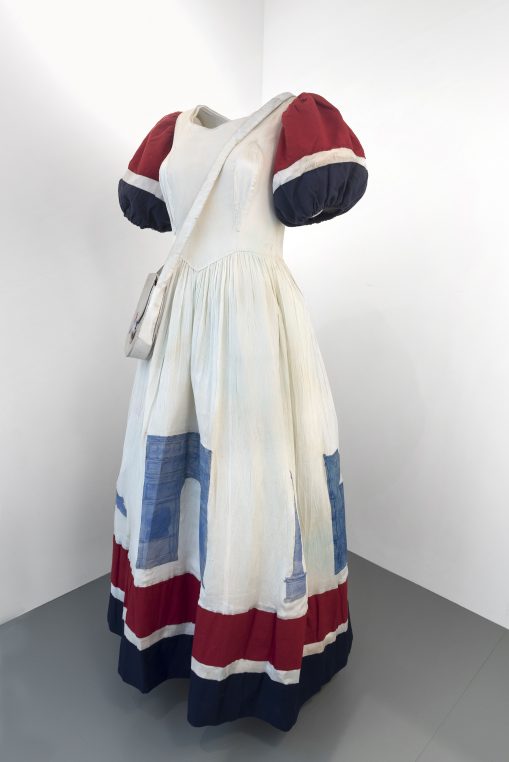 A dress made for the liberation of Paris and worn on 26 August 1944, © Julien Vidal