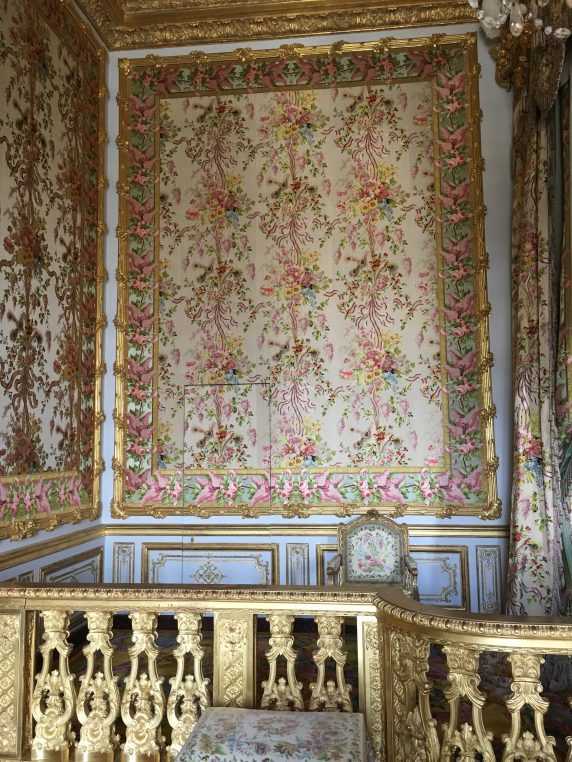 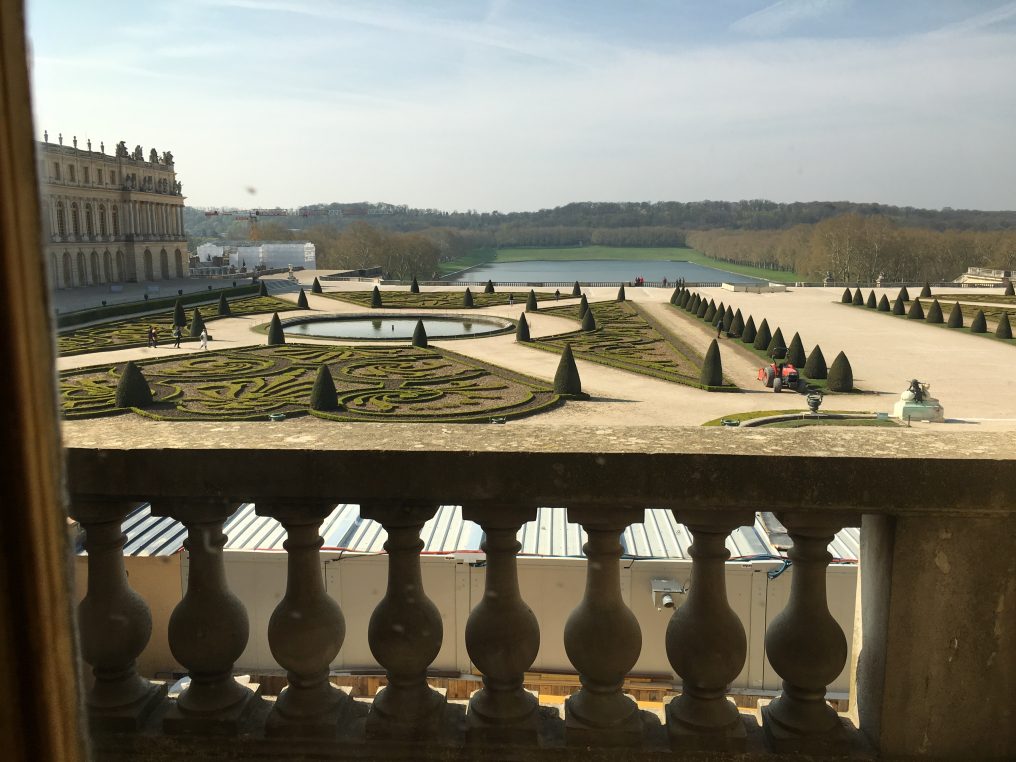 This is the view, the Queen had from her bed when she woke up (except for the tractor!)

At the exact time when Notre Dame was burning, the Grand apartment of the Queen in Versailles was being inaugurated after three years of works including fireproof improvements and air “cooling”. And the result is impressive with the bedroom’s refurbishing and the adjoining three antechambers finding their old decor again. The lavishness of the fabrics, of the furniture and the gilt decor dating from 1672, can be seen after crossing the Galerie des Glaces. It was occupied by three queens, and two dauphines in the XVII th and XVIII th centuries. And nineteen royal children were born there under three kings. 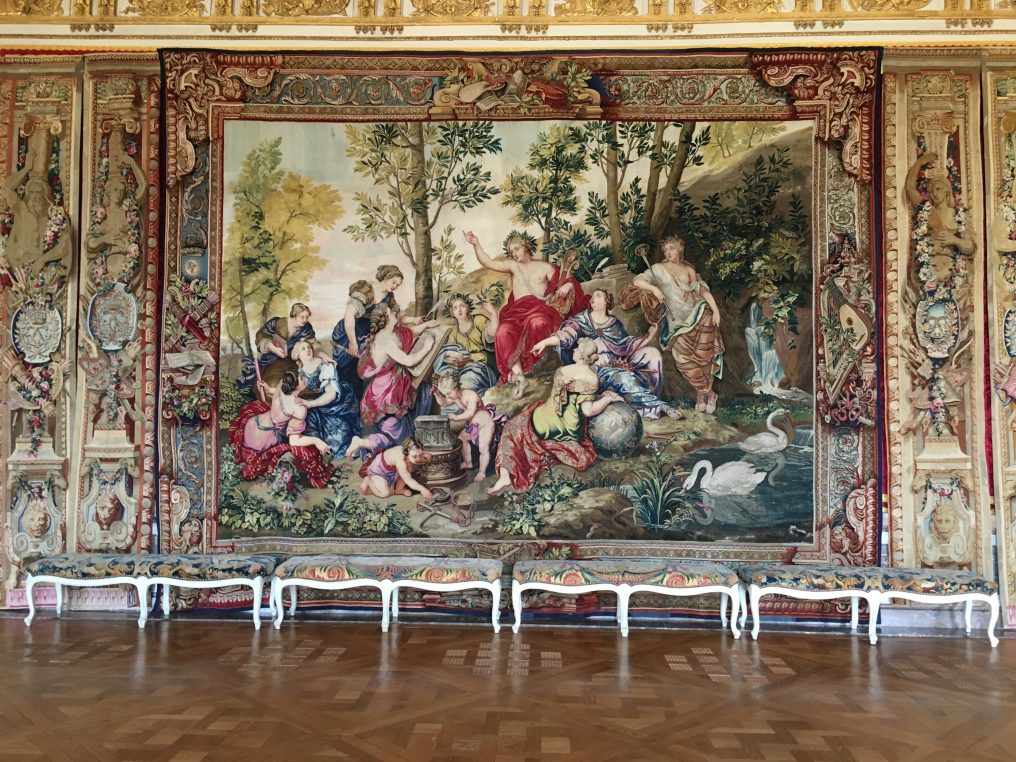 Le Parnasse, Apollo surrounded by his muses, tapestry from the Gobelins on Pierre Mignard drawing 1692-1701

Entering the Queen’s bedroom with its superb baldaquin bed guarded by a gilt gate is very moving. One can imagine her giving her private audience every morning.  The decor was chosen by Marie Leszczynska, whose artistic taste is the topic of a separate exhibition on the ground floor, and the fabric is the one chosen by Marie Antoinette with its peacock’s feathers, lilacs, roses, ribbons and matching stools. One of the hidden doors on the side of the bed is the one the Queen used, to escape the revolutionaries on October 6, 1789. On the ceiling, François Boucher‘s grisailles have been restored. 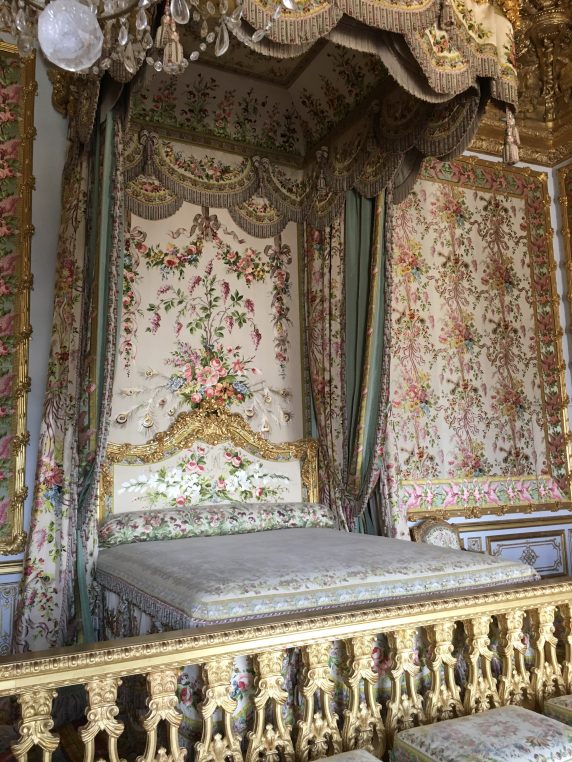 In the next room, the ceiling is painted by Michel II Corneille and features a large portrait of Louis XV and a superb clock as well as two angle pieces of furniture (encoignures). In the antechamber for the Grand Couvert (for dining in public), we discover a majestic tapestry from the Gobelins which features only women surrounding Apollo and a superb screen in Savonnerie tapestry from 1720, which comes form the garde meuble royal. Also a  large portrait of Marie Antoinette with her children by Elisabeth Vigée Le Brun painted in 1787. 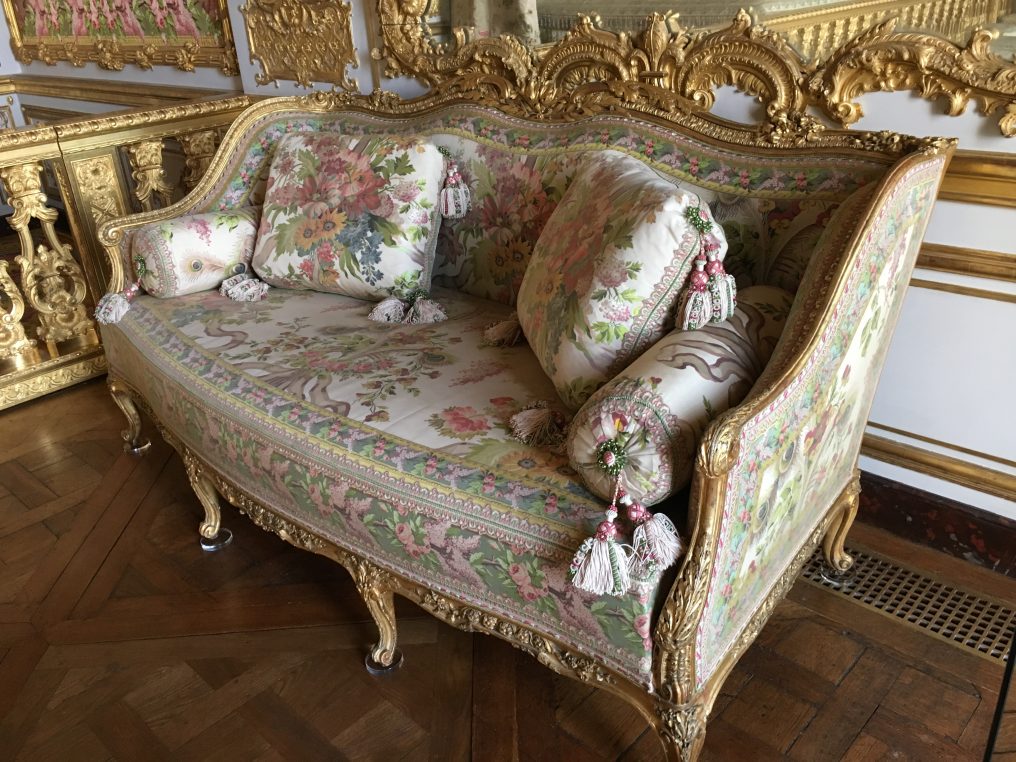 Nicolas Quinibert Foliot, this sofa made in 1771 for the Comtesse de Provence, is now in the Queen’s bedroom

There is a feeling of power emanating from these four rooms decorated with precious marbles, gilt sculptures ceilings, cristal suspensions and wood panelings and yet they were they represent the intimate moments of the Queen . The marble staircase which you might use to go down is also a beauty built in 1680. 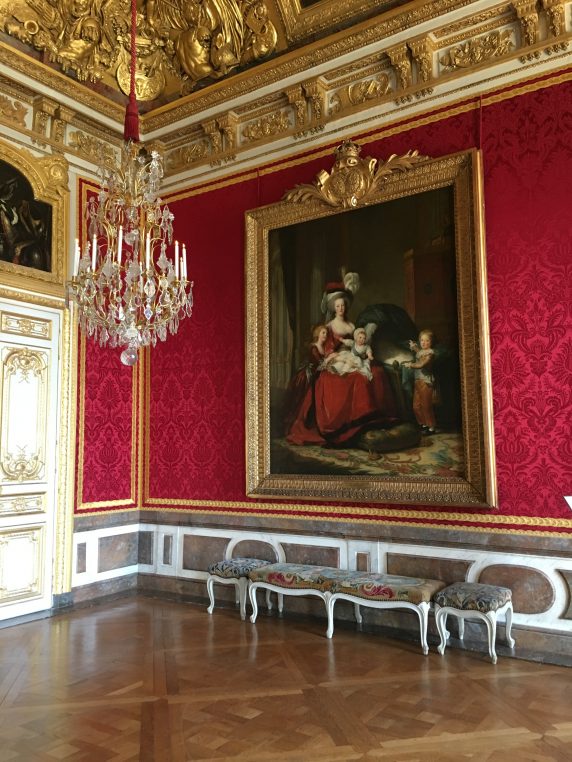 Marie Leszczynska reigned for forty two years and her taste is prominently exhibited on the ground floor in a celadon lined gallery. Born in Poland in 1703, she was married at 22 to Louis XV (aged 15)  after the alliance with the Spanish Infante fell through. I learned that she was a good artist and some of her paintings are shown here: she had a particular taste for Chinese decors and countrysides by Oudry, whose works inspired her. The king gave her many porcelain pieces from Meissen and Sèvres, including a very rare pink  “vase à rocailles” which was recently acquired by Versailles. 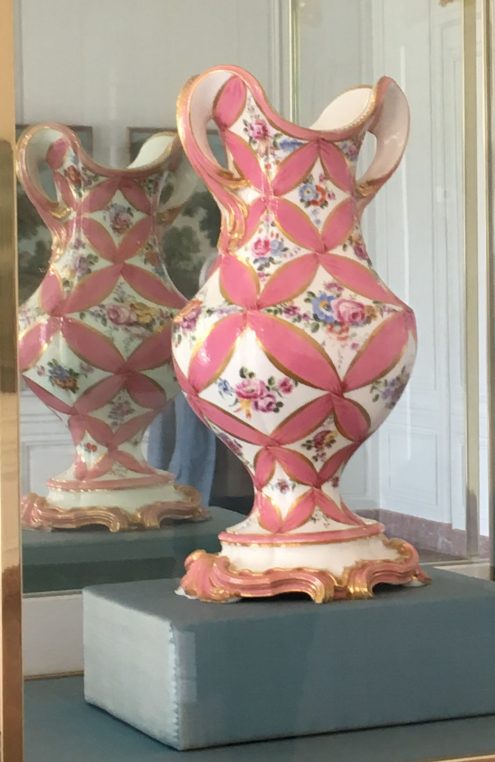 Another part of the castle is devoted to an exhibition on Madame de Maintenon, Louis XIVth last wife, who died three hundred years ago. Hired to raise the illegitimate children which Madame de Montespan had with the King, she became indispensable to the monarch and eventually secretly married him, but always remained very discreet and yet powerful. She founded the royal education house of St Cyr for poor girls from the nobility. Her apartment was reconstructed for the exhibition of paintings and souvenirs which will last till July 21. 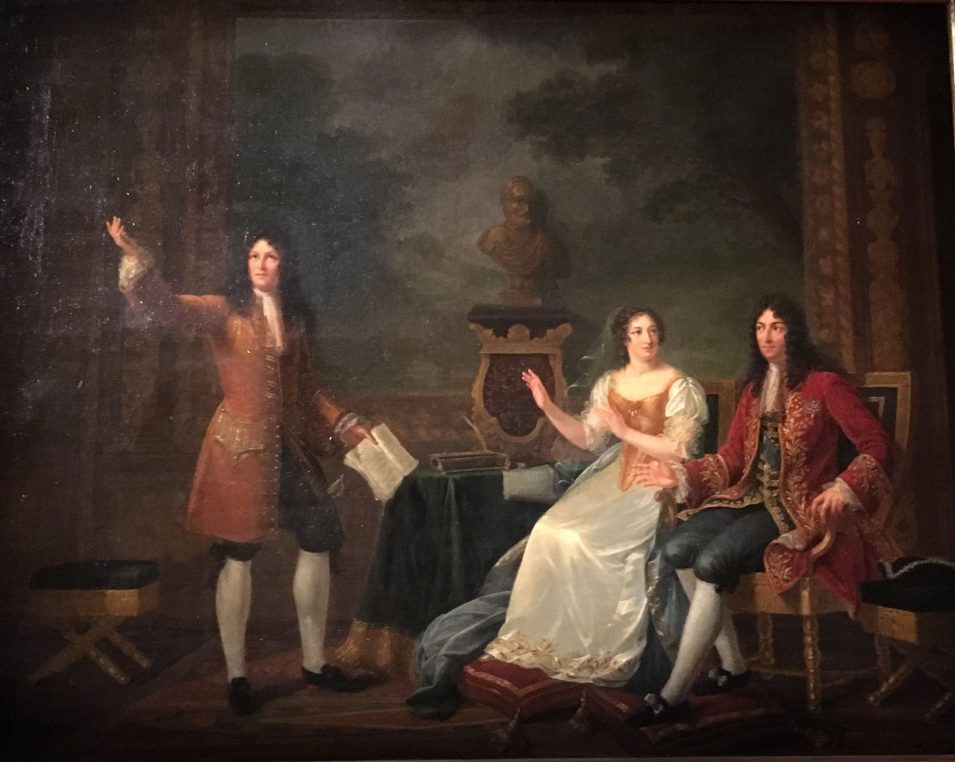 These three moments around Versailles’s brilliant ladies give a new interest to the visit of the palace. This is where the Pritzker Prize for architecture will be awarded to Arata Isozaki on May 24 th and a Biennale for architecture and countryside (Bap!) is starting on May 4 to July 13, throughout the city. 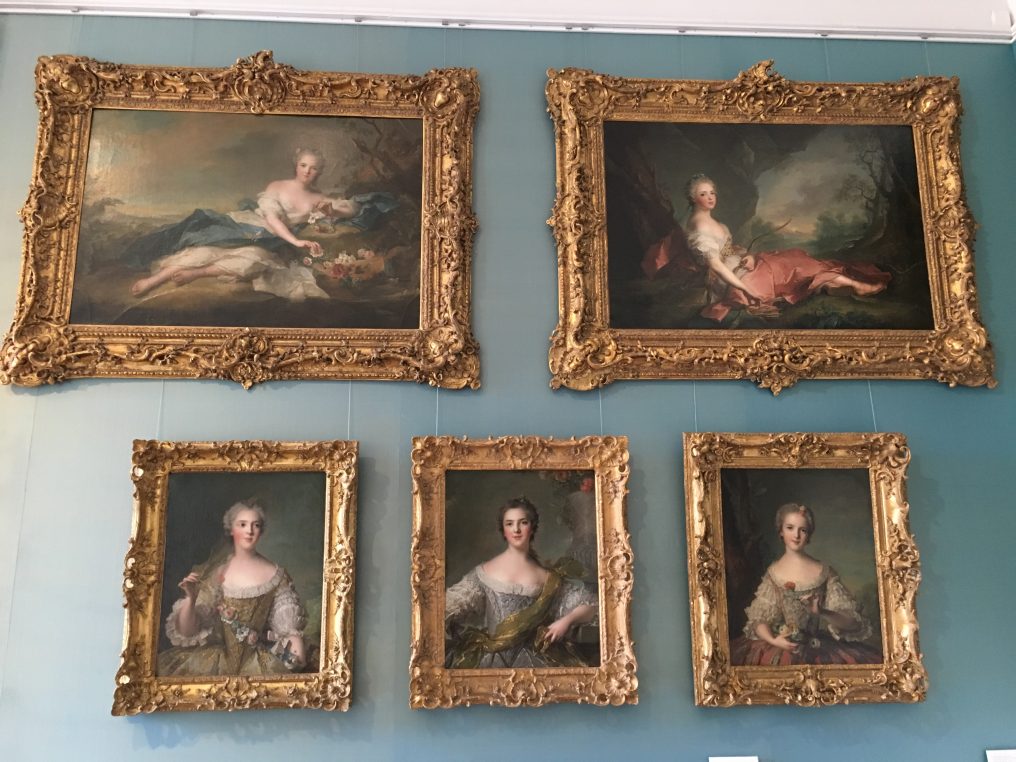 The famous Gallery of sculptures and moldings from the Louvre, will be exceptionally open to the public in the Petite Ecurie and artist Eva Jospin will exhibit a new sculpture. There is no escaping from Versailles this spring…