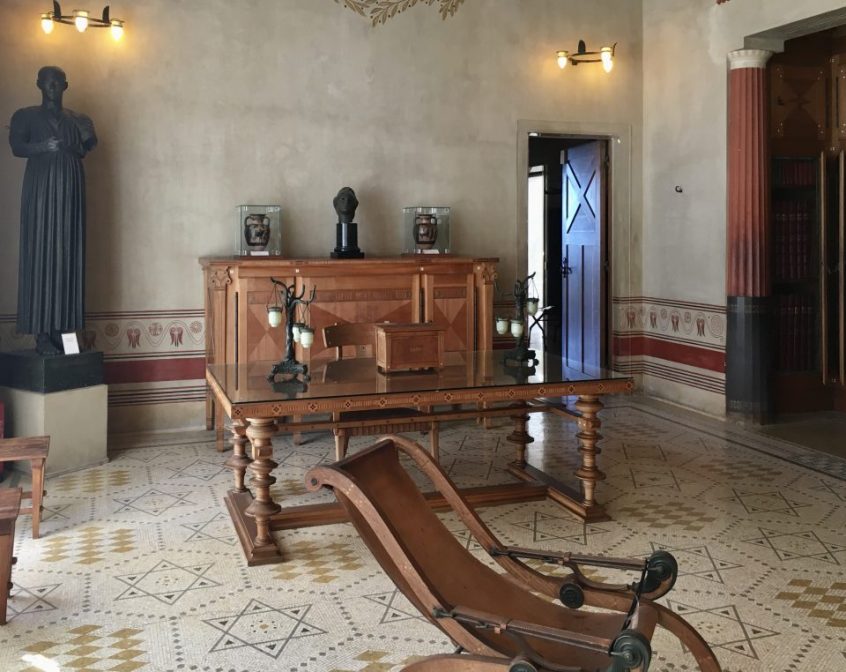 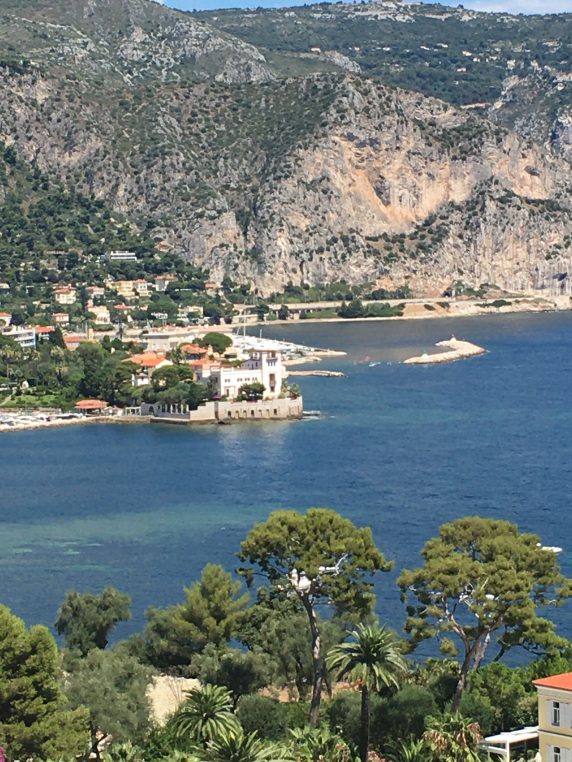 Villa Kérylos has been praised for a long time by Art historian Adrien Goetz, who not only wrote a novel about it but also an art book published by Editions du Patrimoine. For some reason, I never really knew where it was in the Nice area and it is only thanks to my cousin Anne Laure who drove me there,  that I finally discovered it: it was an aesthetical shock from which I have still not recovered a week later. If you are anywhere near Monte Carlo or Cannes, rush to see it. It is a jewel charged with history overlooking St Jean Cap Ferrat in the Baie des Fourmis (Bay of ants) next to at least two exceptional hotels. 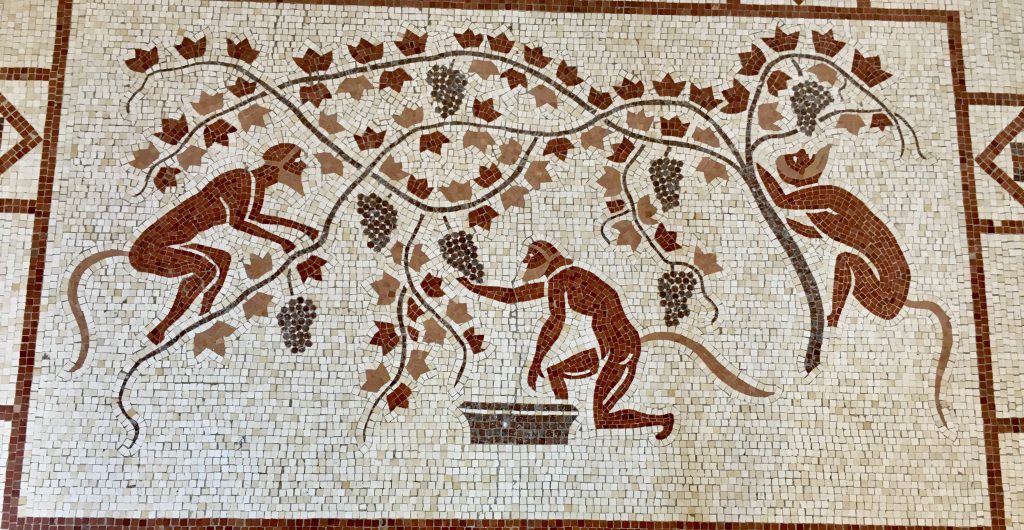 Like Hôtel de Camondo in Paris, villa Kérylos belonged to a wealthy Jewish family, the Reinach, which was decimated during WW2. Yet, it has been kept and restored recently by the Centre des Monuments Nationaux which manages it for l’Institut de France. Built between 1902 and 1908 by Théodore Reinach in Beaulieu-sur-Mer, it is the fruit of his collaboration with architect Emanuel Pontremoli (1865-1956), also an archeologist, who taught at Ecole des Beaux Arts and built among other monuments, the synagogue of Boulogne Billancourt for Edmond de Rothschild. Gustave Eiffel was neighbor, Gabriel Fauré came and played on the “Pleyelos” piano and Gordon Bennett was a guest among hundreds of celebrities at ta time when the Côte d’Azur was especially popular in the winter. 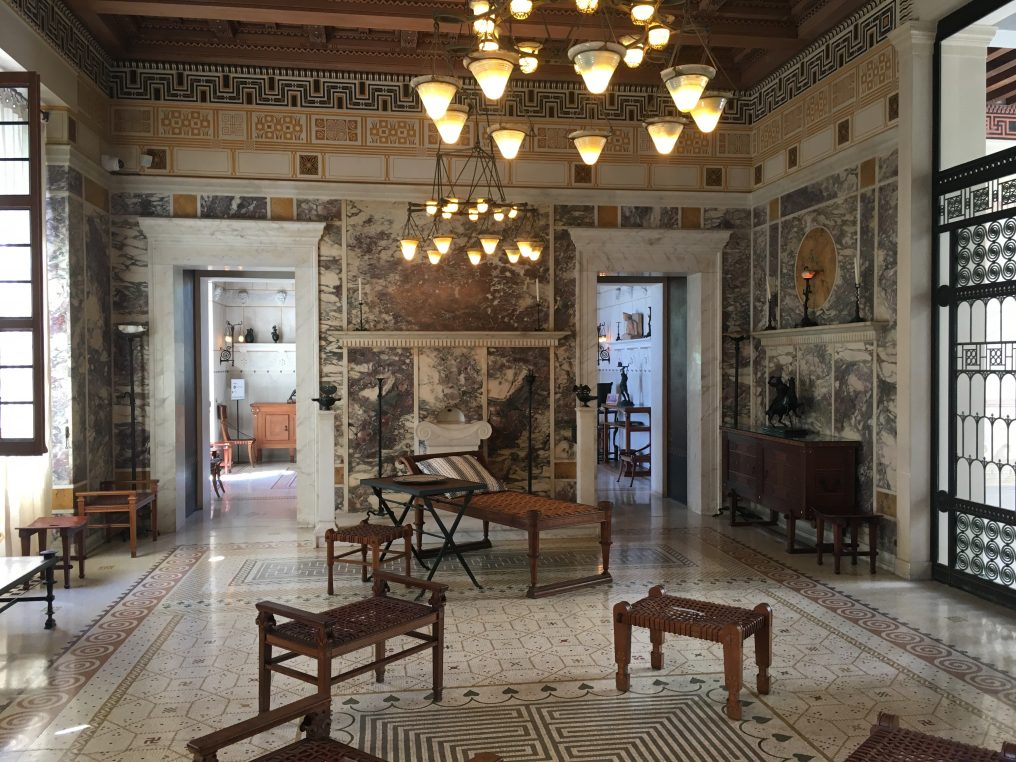 “Andron”, the drawing room, communicates with the peristyle through bronze gates on the right. Grey and safran colored marble alternate on the walls and on the floor, one can admire a mosaic of the labyrinth with Theseus and the Minotaure

Both were keen hellenists and Pontremoli understood perfectly well Reinach’s ambition to create a Greek villa on the model of Delphi or Delos, which the cliffs of Eze reminded him of. In a way it is one of the first minimalist interior architecture where modern practical details, such as mirrors, were hidden in the bathrooms. Everything from cutlery to chairs or desks was especially designed for the house and Théodore’s piano (he was very musical) was hidden in a chest. Lamps were designed on the byzantine model of  St Sophie in Istanbul, there are no bay windows and the general theme is of birds and nature. The word Kerylos means sea swallow. 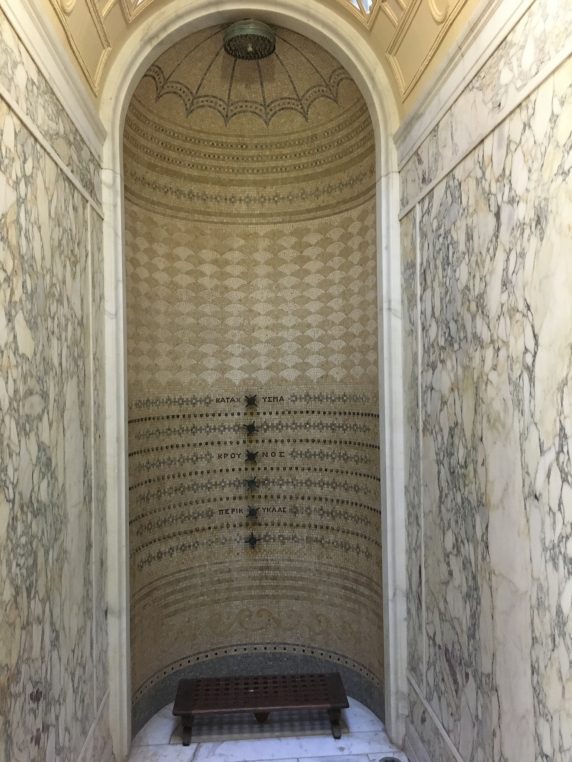 In the “Ampelos”, the shower has three different types of water streams, Perikyklas or circular, Katakysma or rainfall, Krounos or running water

Although luxurious in its materials, the villa is very sober in style: Paul Gasq, whom Reinach had met at Villa Medicis in Rome,  sculpted the friezes and Adrien Karbowsky created all fabrics with Gustave-Louis Jaulmes. Leverrier & Cie created the silver. Louis-François Bettenfeld designed the furniture and I particularly liked a three footed table in Madame’s bedroom. The mosaics on the floor were made in Venice by Nicoli. Precious frescoes from Villa P.Fannius Synistor in Boscoreale are kept in a smaller room. Reinach was not a collector so to speak and while there are few Greek vases and sculptures, the lavish decor is the core of the visual interest. 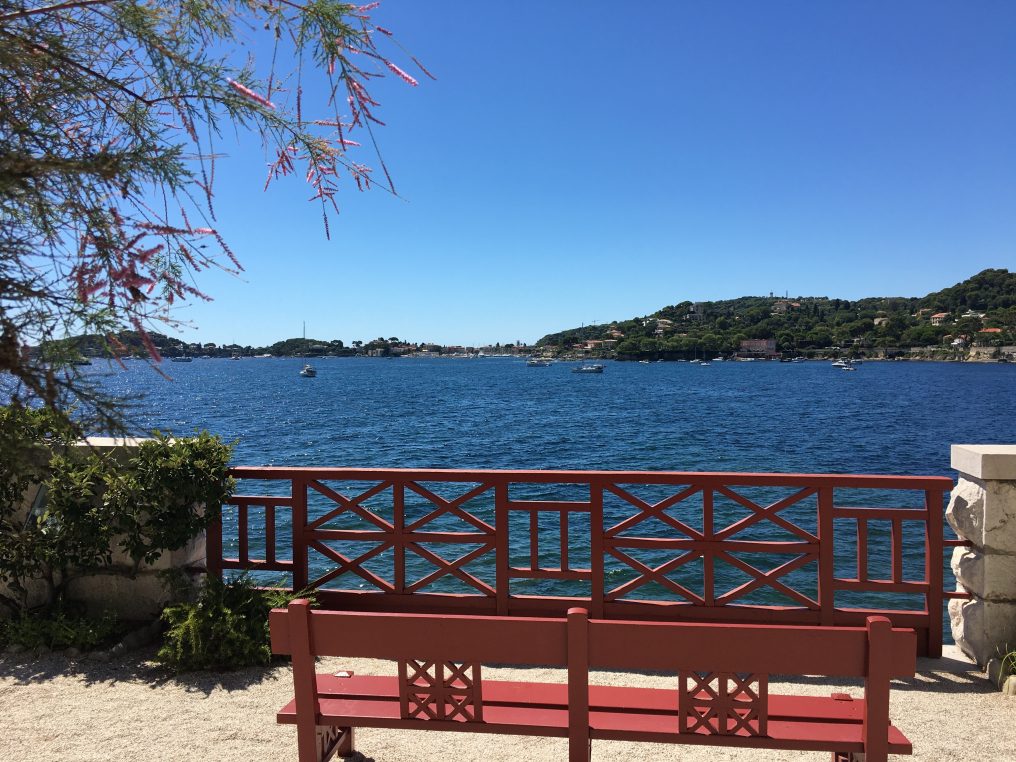 All the furniture has been designed especially for the house, here a bench to admire the view of St Jean Cap Ferrat

The atmosphere inside the house is quite magical and soothing and I was surprised to like the beige and grey tones, which are very masculine, and form a stark and calm contrast to the outside light and the omnipresence of the blue sea through the windows. Visits at the moment are limited to 24 per half hour which means that you are almost alone in each room and the silence is magical. The visit is short, so take the time to watch every detail of decoration, bronze medallion and Egyptian “throne”, beds and fabrics, marble baths and swan decorated taps. 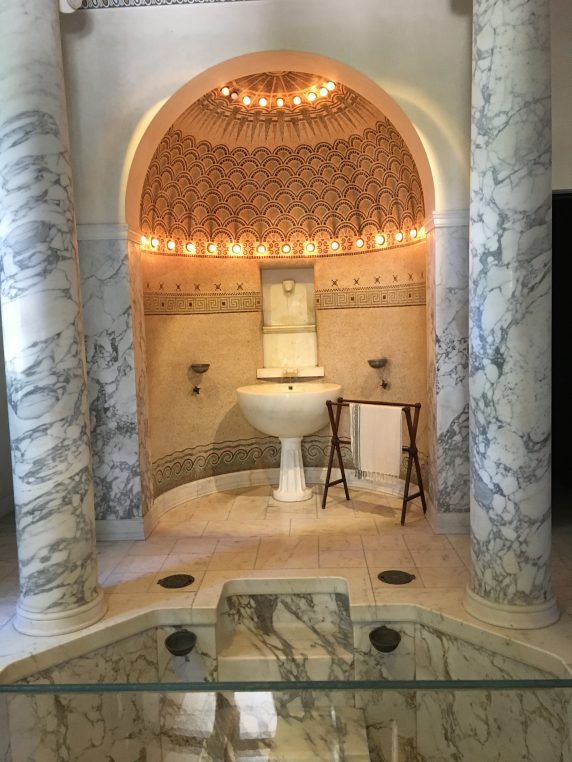 Balaneion, or therms, is at the entrance of the house

The garden with bougainvilliers is minimal, letting the view of the bay take over as a backdrop. On the way out, don’t miss the ice cream shop “Sweetie Fourmi”, just on the right of the dead end street. You can’t miss it since you will have parked your car in the municipal parking a few hundred meters away. I picked a ginger and cream di latte ice cream which I can still feel in my mouth today.

Villa Kérylos, booking is mandatory, from 10 am to 5 pm every day. And read “La Villa Kérylos” by Georges Vigne.

5 Comments on “The Riviera is still beautiful with Villa Kérylos”