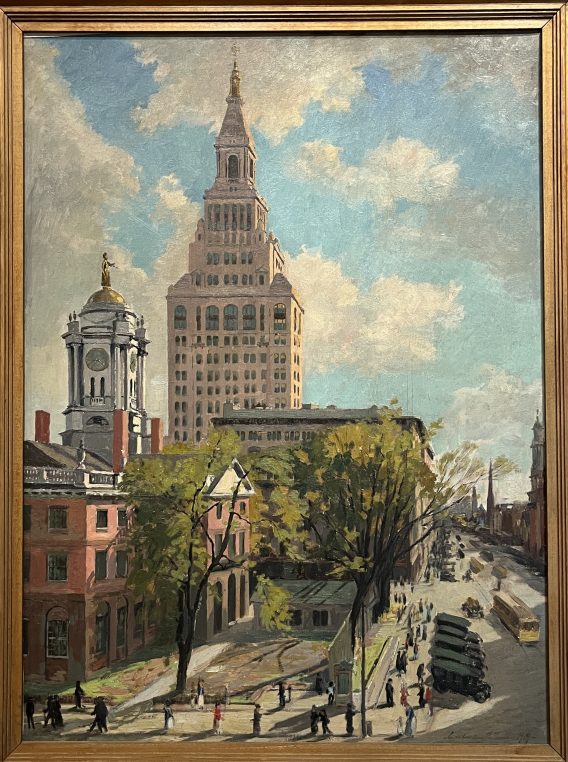 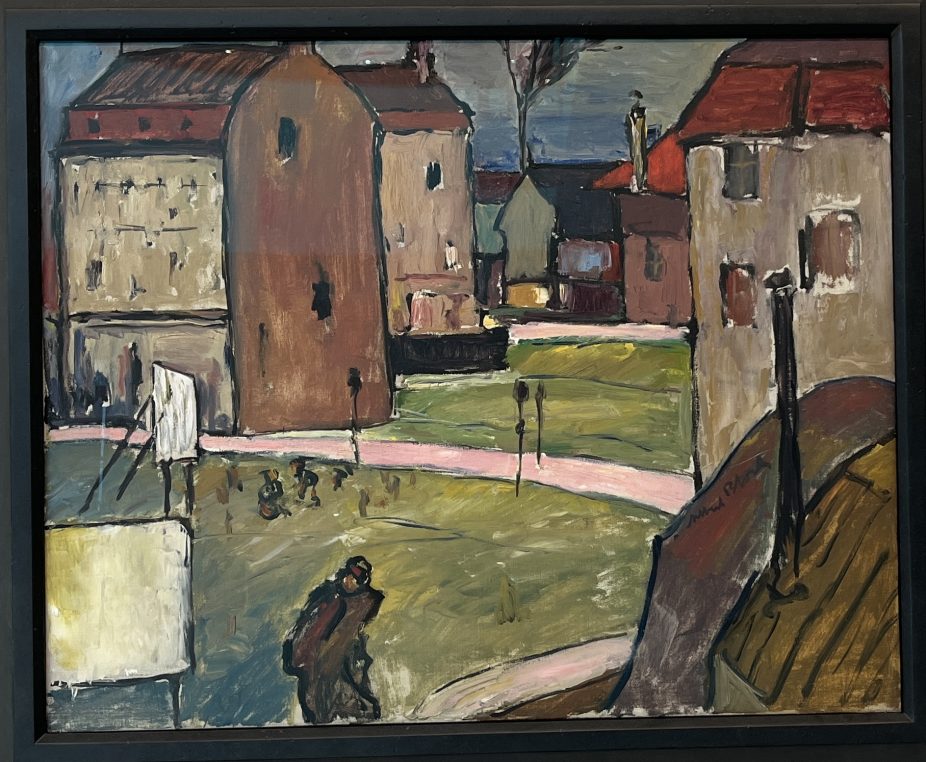 Albert Bloch, Untitled (Cityscape), 1911, Bloch was the only American painter associated with teh Blue Rider movement in Munich

As a member of Frame (French American museum exchange) the Wadsworth Atheneum is on the list of the most excellent “provincial” museums in America and I could not skip a visit there since my last encounter with its galleries dated back to 2017. I went with art historian Cynthia Saltzman whose latest book “Plunder” on Napoleon’s love for Veronese!!! is a bookstore success, which made the visit even more interesting. there are many treasures in this museum founded in 1842 by Daniel Wadsworth, an amateur artist and architect. It now holds 50 000 works from European baroque and Impressionists to the Hudson River School. It was largely endowed by John Pierpont Morgan, born in Hartford in 1837, whose collections (1300 works) of porcelain and Venetian glass can be seen. The mix of modern and old art makes it an exceptional place to visit. 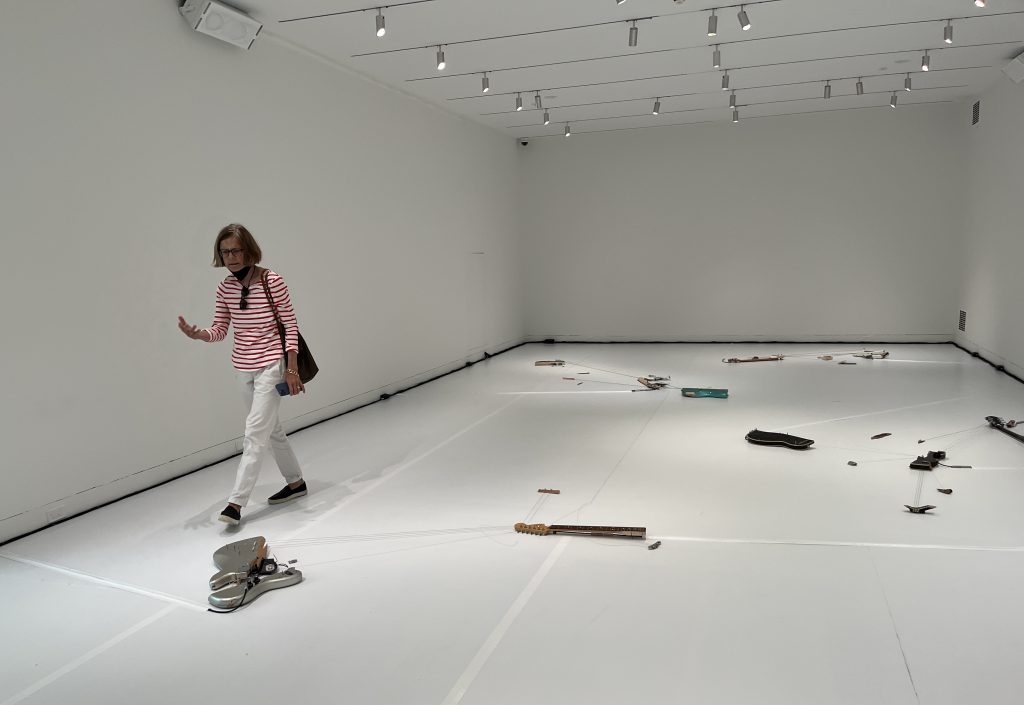 Writer Cynthia Saltzman walking in Naama Tsabar’s installation “Matrix 189”, Melodies of Certain Damage (Opus 6),  made of broken guitars which the public is welcome to play

Diego Rivera‘s “Young Girl with a mask” 1939, Reginald Marsh‘s “Wooden Horses” 1936, an extraordinary self portrait by Leonor Fini in the early 1930’s, a scene of “the Last of the Mohicans” painted by Thomas Cole in 1827, Hubert Robert’s depiction of Jean Antoine Roucher in the Saint Lazare prison in 1797, Poussin, Gauffier, all attracted my eye. The most important room is the Morgan Great Hall  which was inaugurated by JP Morgan in honor of his father. It holds 95 large paintings hanging above each other and is a very dramatic sight. A special exhibition of “Design in the American home” was excellent in the smaller rooms. 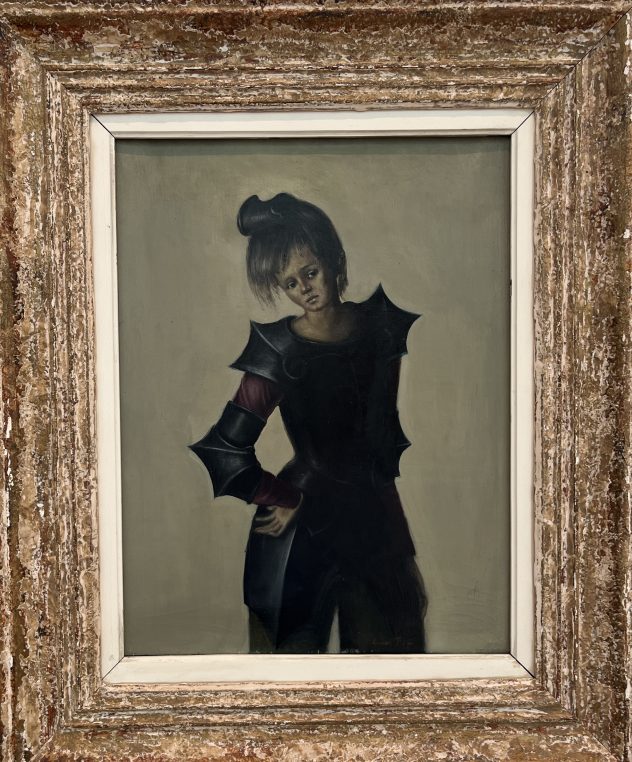 Leonor Fini, Self portrait, early to mid 1930’s, she portrays herself in medieval armor

The are three levels in the museum and three different buildings all linked so it is better to take a map when you start. What I most liked this time is that contemporary and classical art are often mixed around the open courtyard and interior rooms are used for furniture or more intimate settings. The visit is very whimsical and you are suddenly surprised by an impeccable Picasso or by a Renaissance marble statue. Many paintings have been acquired thanks to the Ella Gallup Sumner and Mary Catlin Sumner Collection fund. They were sisters in law but never knew each other because Ella died at 28 long before Mary married (Frank) into the family. And they were never collectors. In 1927, money was given to the museum to enrich the collection by Frank Sumner and their names appeared on the fund. The first painting bought was a Tintoretto. Many would follow until now, which means that most of the cartels carry their name. 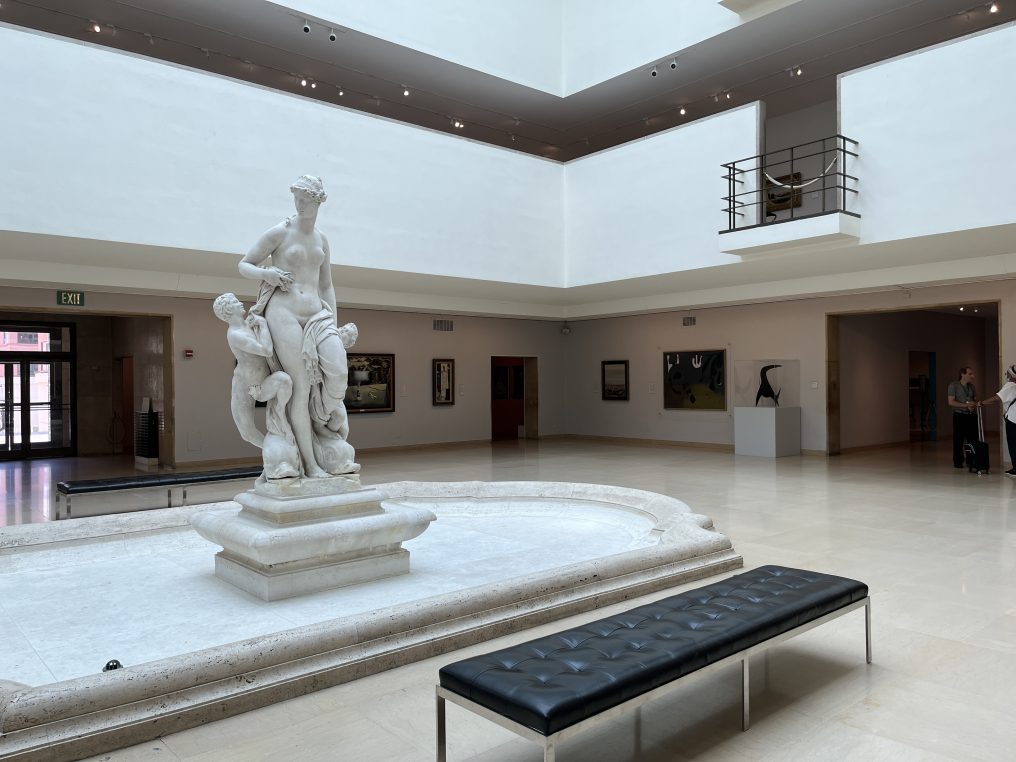 Pietro Francavilla, Venus with Nymph and Satyr, 1600 in one of the courtyards

On September 16, the “Glass Today” exhibition will start at the Wandsworth Atheneum and I wish I could attend it. There is a very nice cafeteria with hamburgers and sandwiches and Hartford is very central in Ct, so don’t hesitate to go…