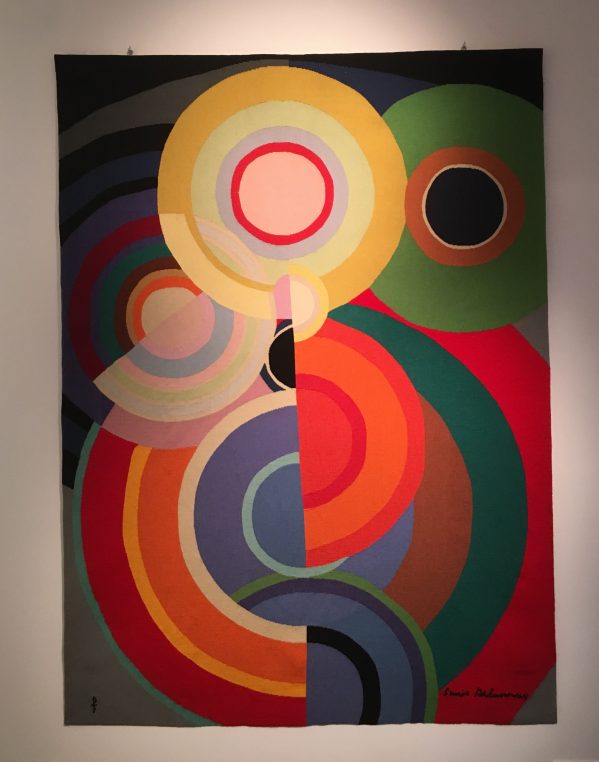 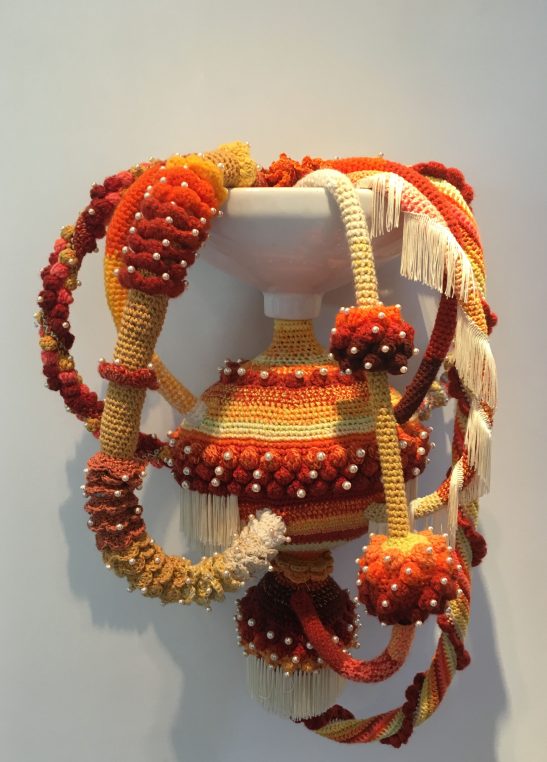 Danièle Kapel-Marcovici is a character. She transformed her mother’s modest company of cartonage Raja,  into the largest European wrapping company in thirty years and has now developed two major foundations. One Fondation Raja for women’s rights et education and another, in Lubéron, called Fondation Villa Datris. Her mother’s workshops in Paris’ 20 th arrondissement have recently opened as the Parisian antenna of Villa Datris. Tissage Tressage, includes 28 artists who use threads as a their main medium. From Annette Messager to Sheila Hicks, Marinette Cueco and Joanan Vasconcelos. The space is superb and entrance is free. 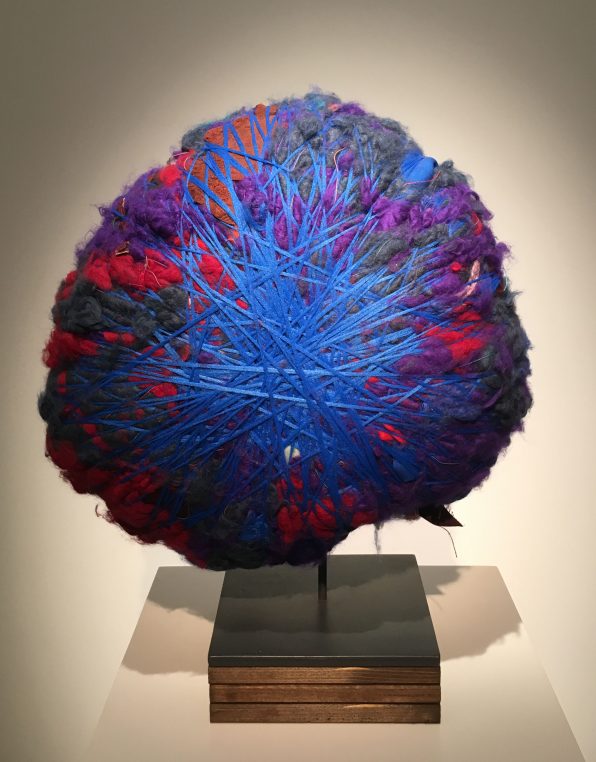 I had heard of l’Isle sur la Sorgue’s Villa Datris but not seen last summer’s exhibition of “Tissage Tressage”. Yet 43 000 visitors have visited it and word of mouth is working well after eight years. The collection is focused on contemporary sculpture. And what is presented in Paris are the pieces acquired by the foundation of the wonderful artists selected in the show. 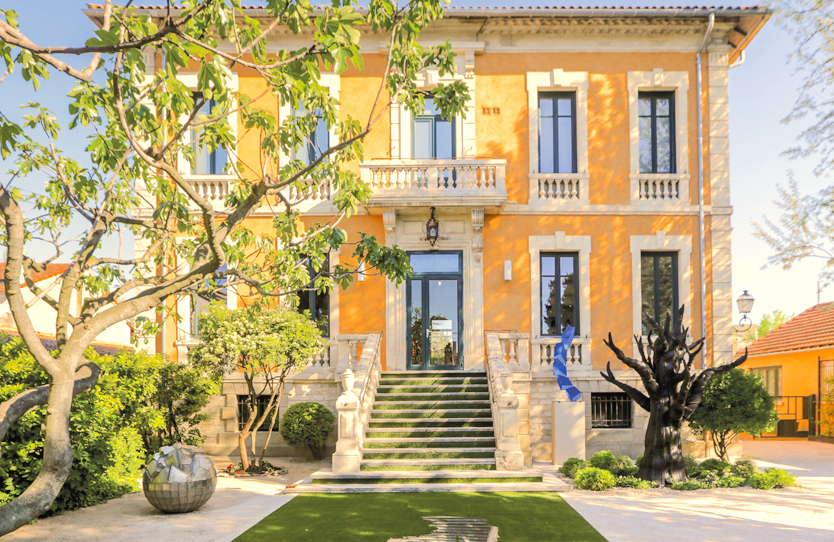 I personally fell for a young Italian sculptress from Todi who threads copper wires. Antonella Zazzera looks more like an engineer than an artist and speaks very scientifically about the power of light in her sculptures. “Armonico LXXXV” is a long metallic grid of copper yarns sown together which reflects light in its pink metal. She will show in Paris at galerie Jeanne Bucher Jaeger on May 18 th. 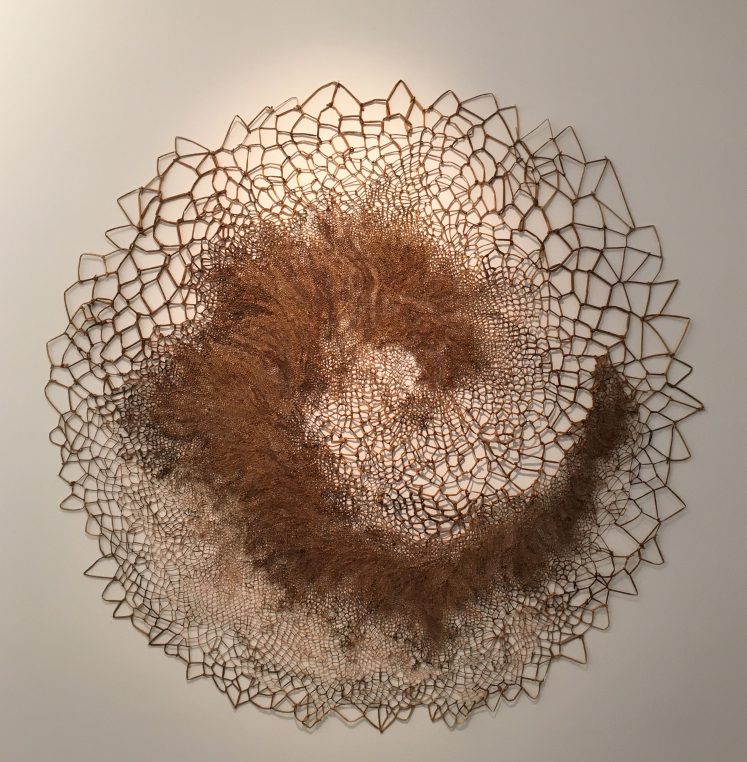 The star of the show is Marinette Cueco, who uses vegetal twigs of grass which she interlaces. She plaits, knits, uses knots and crochet for her mysterious sculptures and occupies a whole room of the house. Lilian Bourgeat shows a red rope with knots which crosses the walls, Pierre Daquin created a folded off-white woven carpet, Sheila Hicks has a superb sculpture of wool and acrylic fibers, and Annette Messager is present with “Tentation”, a hanging sculpture. 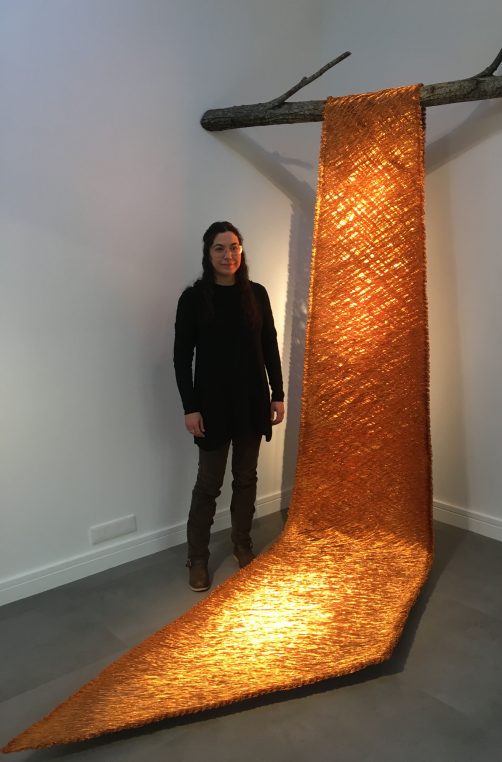 There is also a video by Laure Prouvost, which tells a story on her family using the contrast between crafts (ceramics and tapestry) and new technology (tv and video).

Espace Monte Cristo is very near Père Lachaise and Mamma Shelter restaurant and hotel in the pretty quartier of Charonne. It is a good excuse to discover one of Paris’s most trendy areas. Next Summer starting in May, a exhibition on Animals in Art, “Bêtes de scène” will be at Villa Datris in l’Isle sur la Sorgue where the sculpture collection of the Foundation is kept. Entrance is free for all.

3 Comments on ““Tissage, tressage” is the new art!”