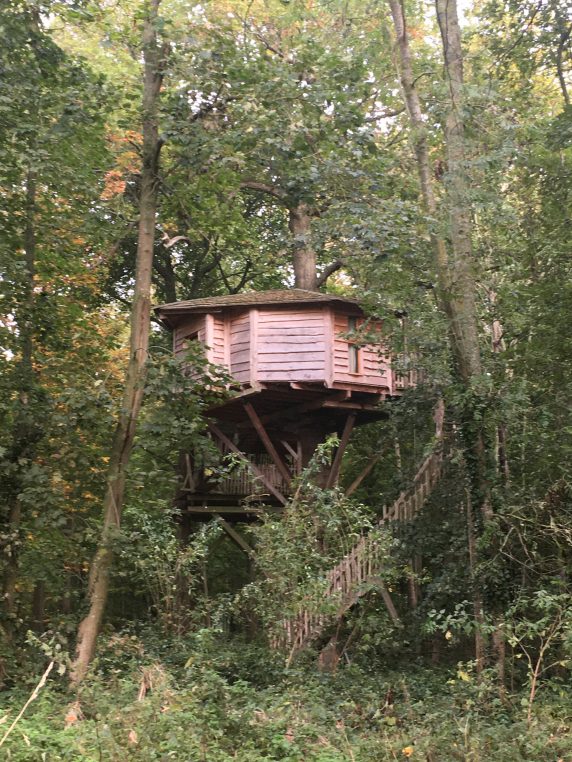 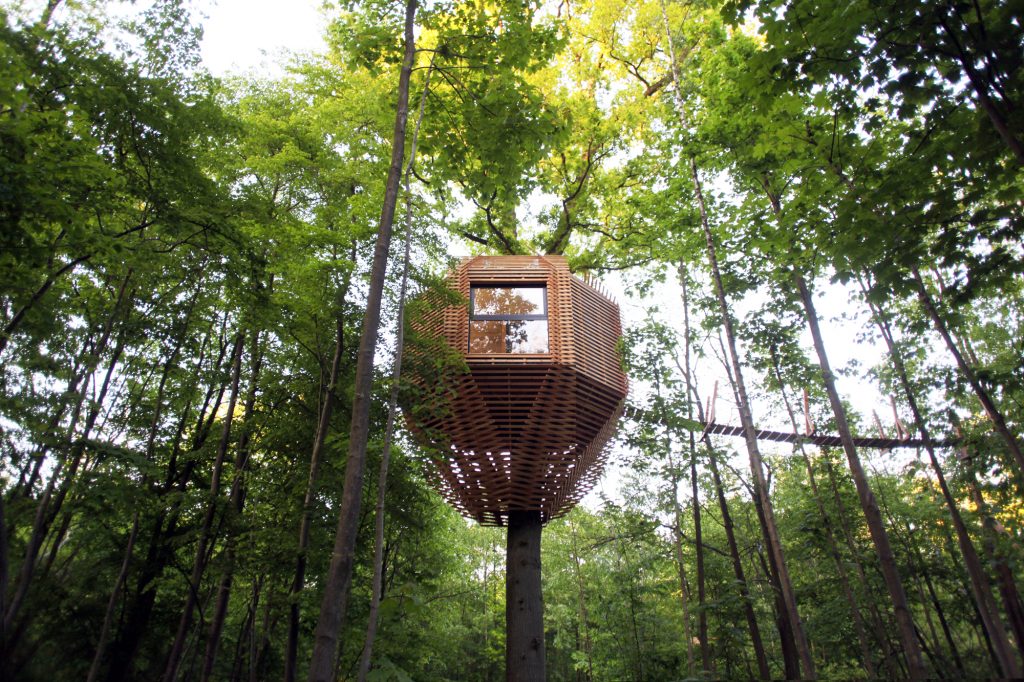 Coucoo Grands Chênes in Raray,  with a light bridge and Nordic bath at the end, architect atelier Lavit

I had wanted to go for many years to Raray, the spectacular property owned by the La Bédoyère family near Senlis and stay in one of their tree huts. But I only went last week, and have to admit I did not spend the night because it was fully booked. Emmanuel de La Bédoyère, who started this adventure six years ago with Gaspard de Moustier, took us around to visit the large and smaller two or three bedroom cabanes located on the golf course, which his father Jean Marc created thirty three years ago. The surroundings are peaceful and superb, with the castle of Raray and its hunting decors, where Jean Cocteau filmed  “La Belle et la Bête” in 1945. It will soon be a showroom for Benjamin Steinitz, the antique dealer, whose father had already used the castle in the past. The hotel closes at the end of November but now is the time to book for next Spring. 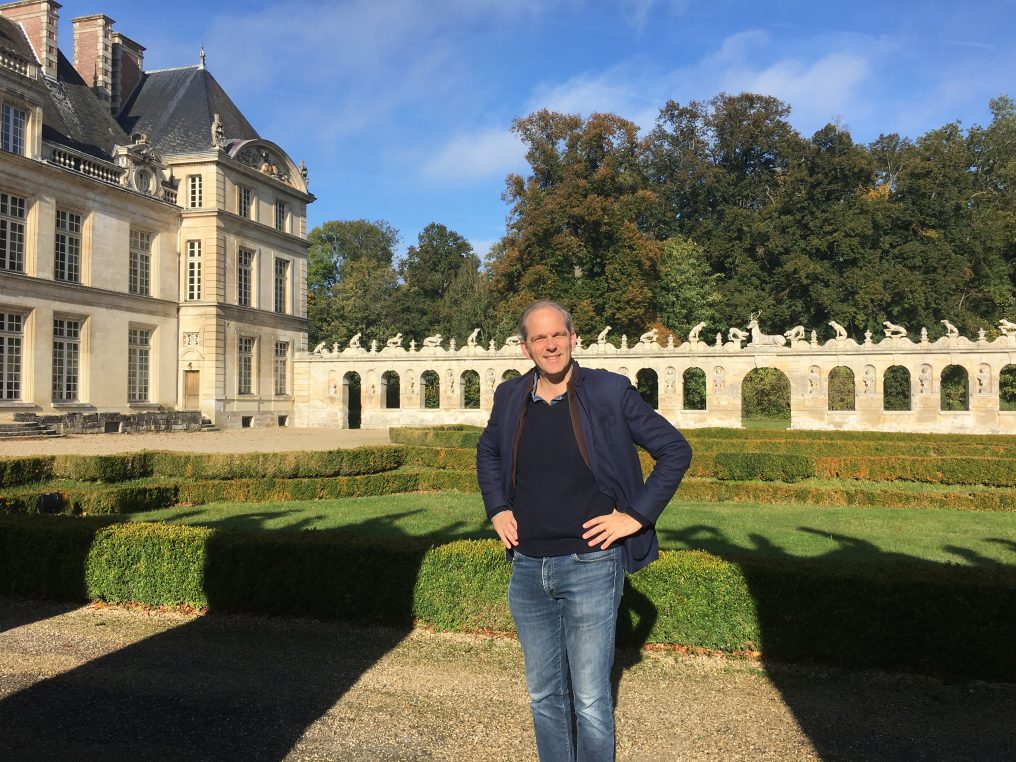 Emmanuel de la Bédoyère in front of the castle built in 1522, with Renaissance balustrades and sculptures commissioned by Nicolas de Lancy

Once you enter the property and face the amazing Renaissance castle, you can park near the golf club and get your keys, flash light and map from the reception desk. Your luggage will be carried on a golf cart to your room and can be pulled up with the special rope and pulley which is also used for the baskets with your meals (breakfast, cocktails, dinner). On our way to one of the lodges, we crossed customers who were leaving and the way they said they had loved their night was the best publicity you could get. Their eyes were full of stars! The large forest located one hour north of Paris near Senlis gives you the feeling of having travelled very far. You cross some of the holes of the golf course on your ten minute walk to the rooms perched in centenary oak trees. The houses are both very confortable and well heated (they close at the end of November until March) and fairly sporty. There is a Nordic bath with an Ultra Bio Ozone cleaning system invented by the team, in almost every hut. And this is truly one of the amazing bonuses of the stay. I remember once taking a shower outside in the middle of the forest in Kenya and loved the proximity of nature. This is the same. Everything is done to protect the environment and all technological inventions are green. 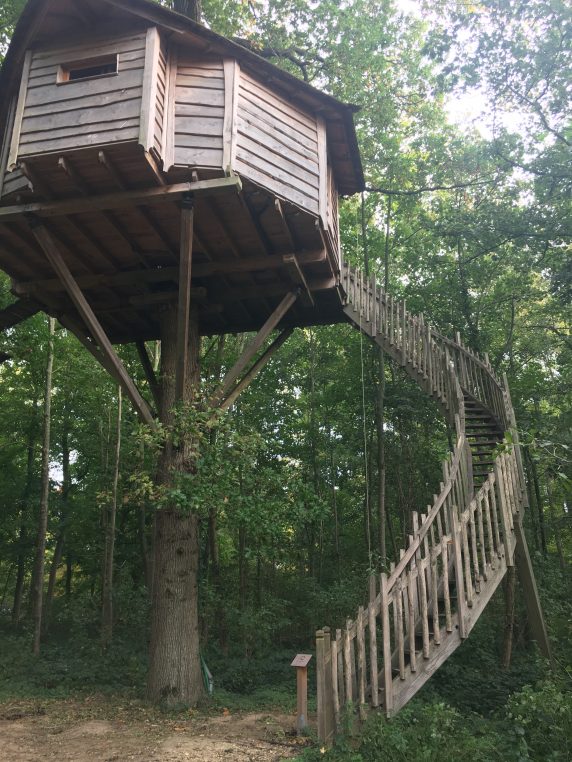 The climb is lighter on some huts than on others which are only accessible via a ladder.

Emmanuel met Gaspard de Moustier in a forest in 2012. He was on the verge of moving from an investment bank to managing his father’s agricultural properties and was looking for ideas. Gaspard had already started with eight cabanes in Franche Comté (near Switzerland) on 70 has of wood and 80 has of lake between Bezançon and Vesoul.  He wanted to maybe build a golf course and was curious to hear about Raray’s. Each was interested in the other’s experience and they became partners. “Les Grands Chênes”  was opened in 2015, then “les Grands Cépages” in Sorgues, Chateauneuf du Pape in 2017.  This year they bought a new 35 has property north of Compiègne, in a forest again. There are 20 to 25 huts on every site. And now five different sites. 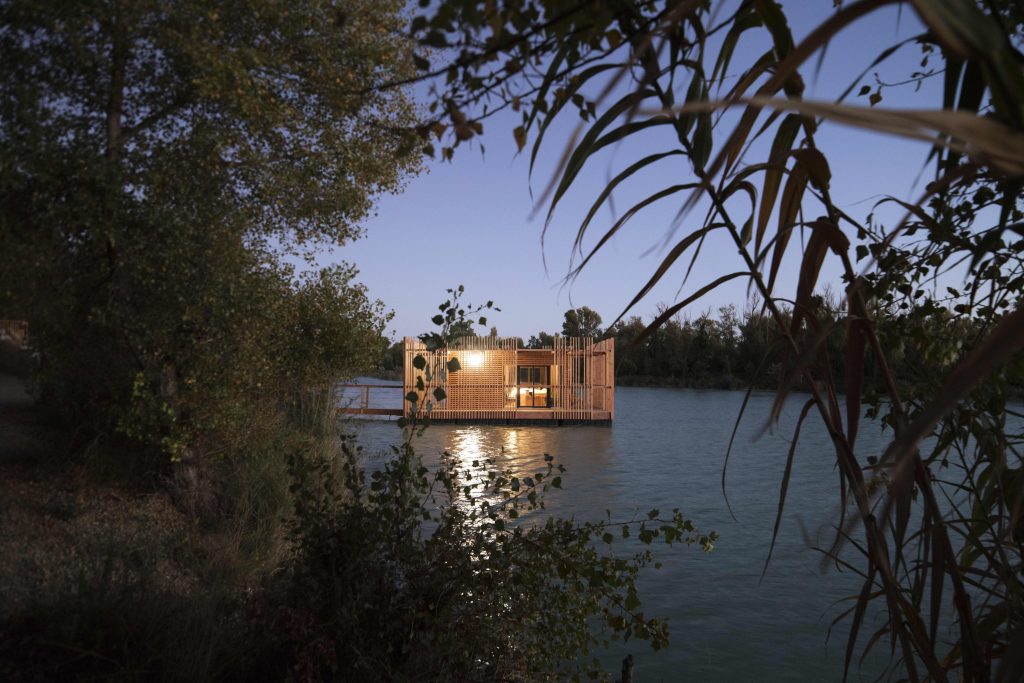 When I questioned Emmanuel on which public came to his hotel, he said some fierce campers save for a year to come and enjoy the luxury of being perched in a tree, others are families with three children who want to walk in the forest and dine in the open. There are many couples who enjoy a romantic night and nature lovers who are just curious. The proximity to Paris is obviously a great asset! The prices are between 145€ and 385€ a night for two to 6 people.  Inside the huts is a bit like a chalet with wood all-around and nice terraces from which you listen to the animals. “Yesterday and today do not  exist anymore, only the present moment counts” is their motto. The food and  decorative items are all local and isolation of the houses comes from natural wool. The architects vary from one to the other but they all have in common a passion of preserving the environment. One of the more contemporary is Marco Lavit. 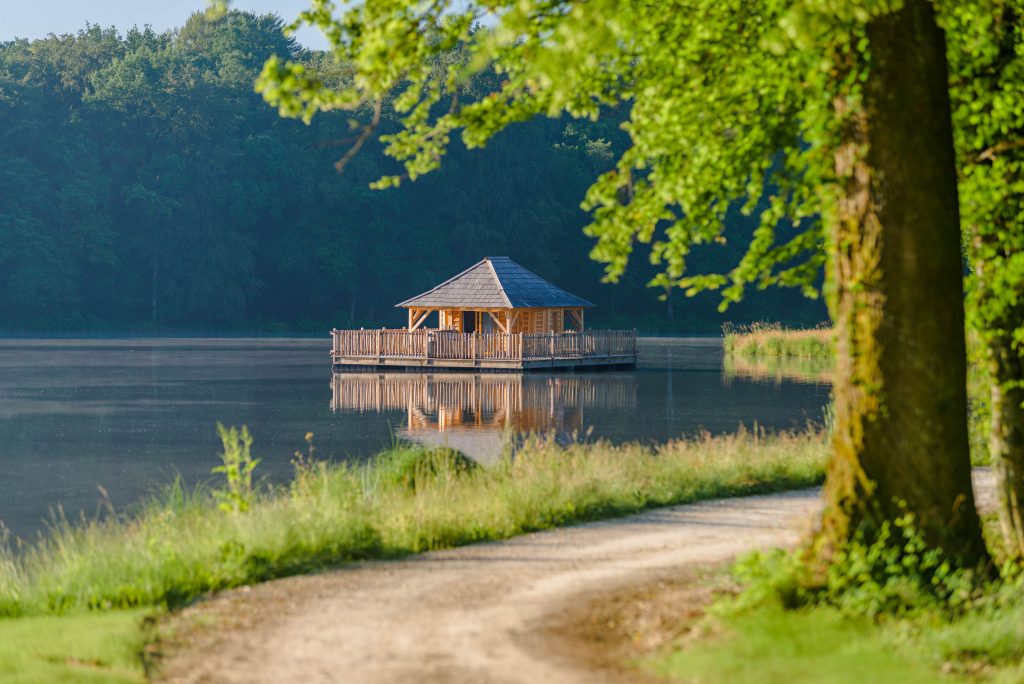 It is very important when you book – and now is the time for next spring- to talk to one of the booking agents at Coucoo. Each house is different with specificities and whether you come with young  children or their grand mother, you need to specify your tastes. Booking is only made through the Coucoo website and through Esprits Hauts de France, the touristic antenna of the region. There are fifteen employees per camp and Gaspard and Emmanuel are there every day to check the details. It is quite a fascinating enterprise! 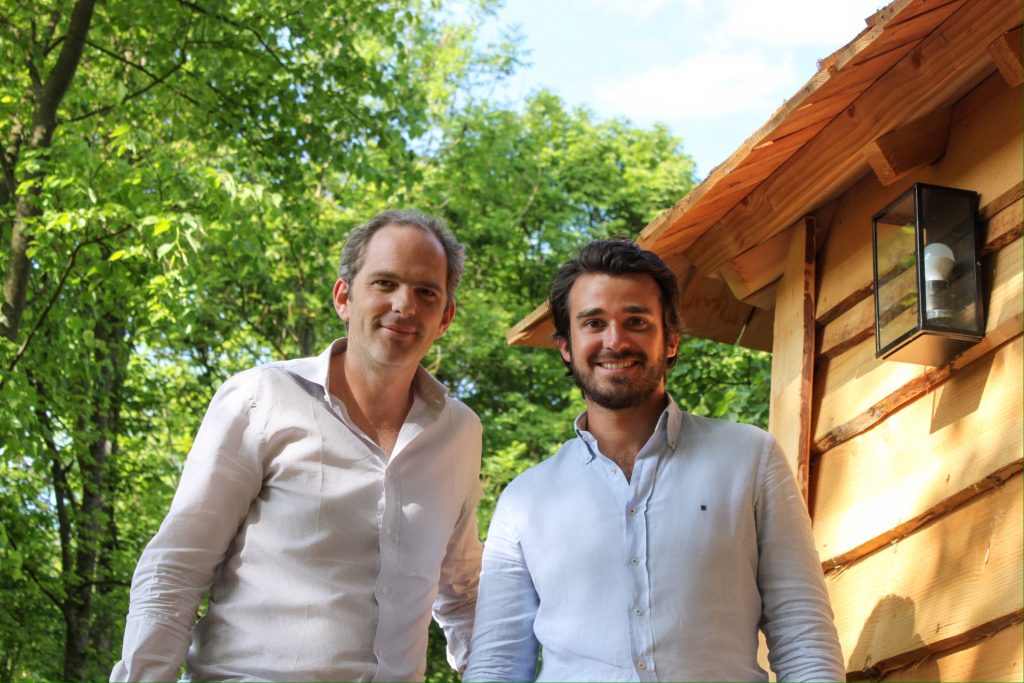 7 Comments on “Tree houses for rent what fun!”