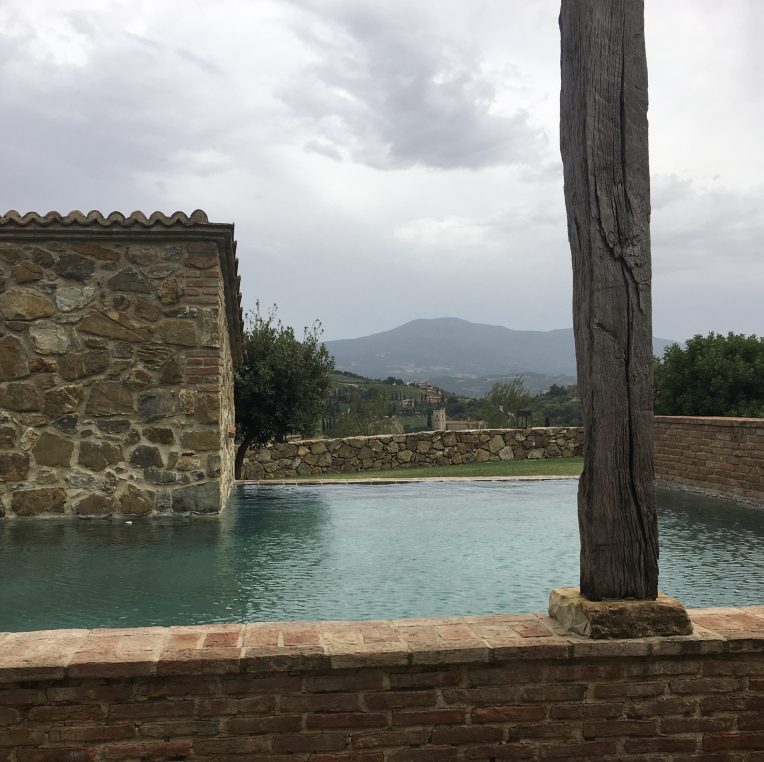 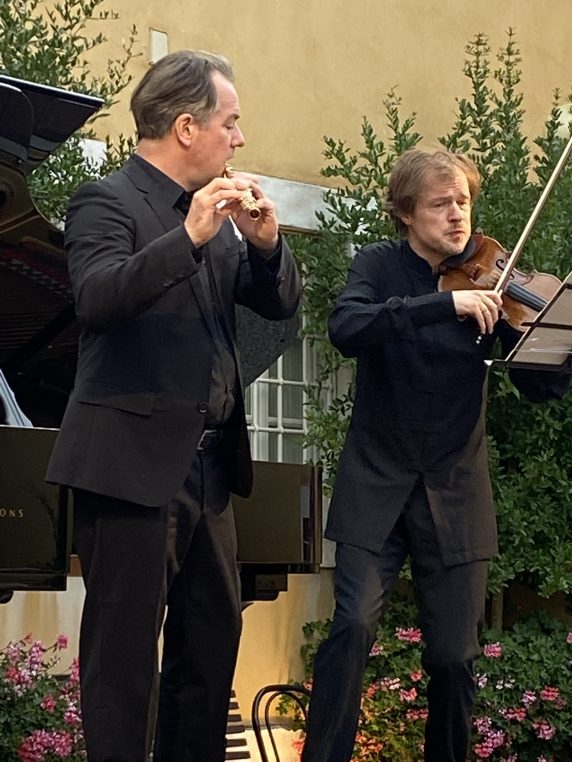 How perfect can a week in Tuscany be? Far from the book “A Summer’s lease” by John Mortimer where everything goes wrong for the poor British tenants of a villa, my week in Fiesole and San Giovanni d’Asso near Pienza, were perfect from beginning to end, with a variety of activities from chamber music at “Incontri in Terra di Siena” to golf at “Castiglion del Bosco” and dinner at the nursery LeLune in Florence. How did it happen? Only thanks to generous and clever friends who like to laugh and chat a lot, and have beautiful houses. I used to do this in Luberon with the Aix and Avignon festival. But in Val d’Orcia, things are both grander and more modest, with the greatest world soloists playing chamber music in a garden with the crickets singing along and just for 150 people. How much more perfect can life be? 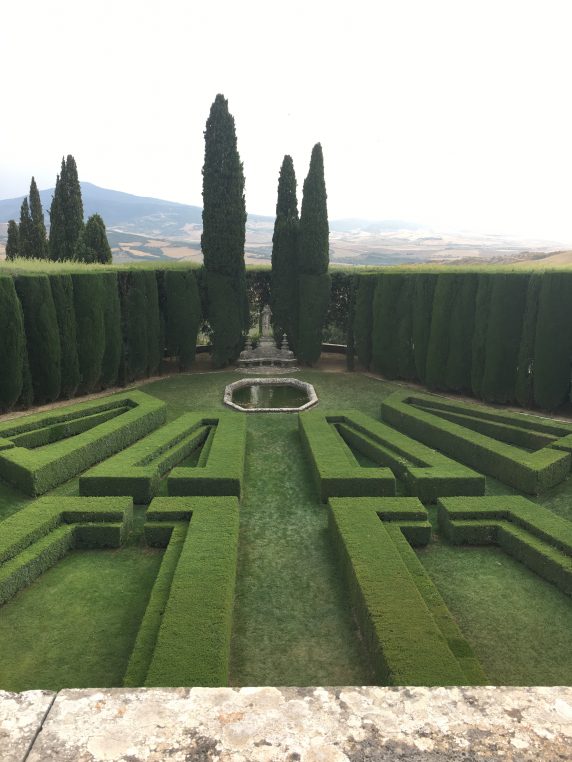 When AG invited me last March to stay with her near Pienza, I was stunned that anyone could make plans which involved flying and crossing borders. And this invitation kept me going through spring. I immediately booked my flight to Florence where I knew the prettiest house of Fiesole was awaiting me in Monte Ceceri. The travelling was very easy with hardly any hassle if you are vaccinated. In Florence, I went straight to Ferragamo which carries the most beautiful AND confortable shoes on via di Turnabuoni and then to Locchi, a glass and cristal “laboratorio” which still sells old fashion carafes and striking blue glasses. La signora Locchi, 89, is there to help you with her large smile and good commercial skills. 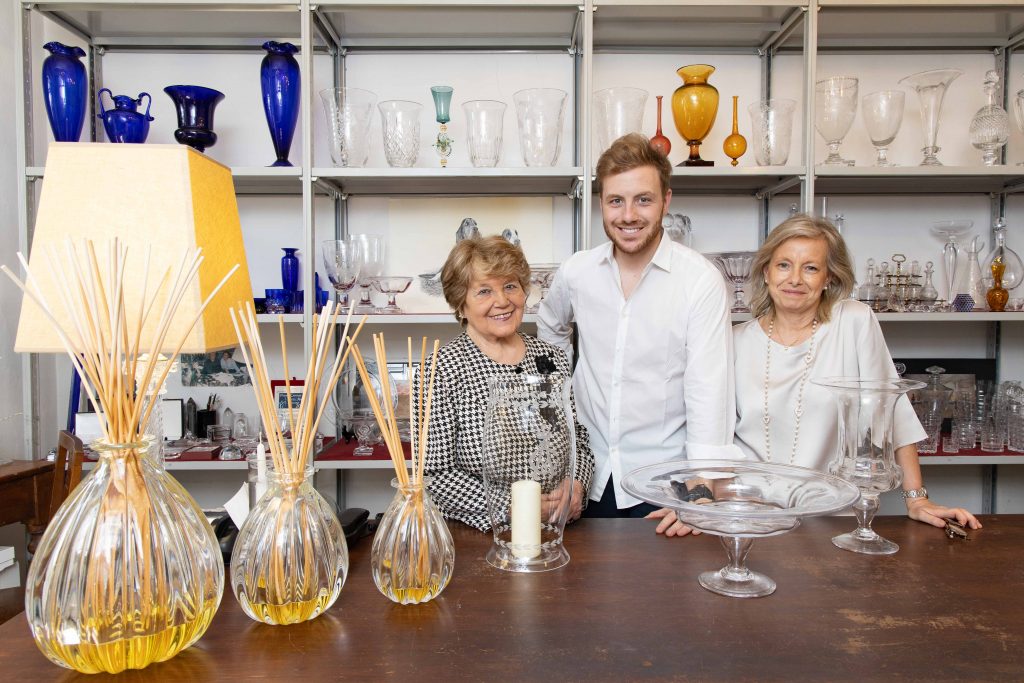 Paola, Matteo and Giovanna Locchi in the Florence glass sanctuary

We then embarked for a 90 mn drive to Val d’Orcia, this area south of Siena which was so poor at the beginning of the 20 th century and is now planted with olives and vines all over. Montepulciano, the wine capital, the ghost abbey of San Galgano, the Benedictines of Sant’Antimo, and the monks and frescoes of Monte Oliveto Maggiore and Pienza kept us busy for a few days with our evening concerts at la Foce, Iris Origo’s house and gardens which is described in her best selling book, War in Val d’Orcia. 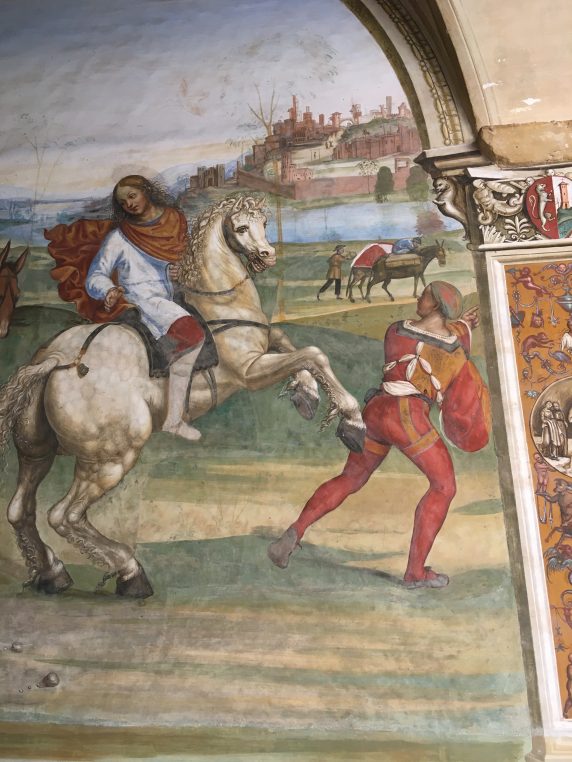 Detail of a fresco by Antonio Bazzi, Il Sodoma, in the cloister of Monte Oliveto Maggiore abbey

Each house, each church, have their own story and the landscape is so varied, with the hills, the wheat fields, the sun flowers, the vineyards that it is hard to drive faster than 50 kms an hour… One’s mind wanders and thinks about all these painters who worked in Tuscany and beautifully rendered the sacred spots. 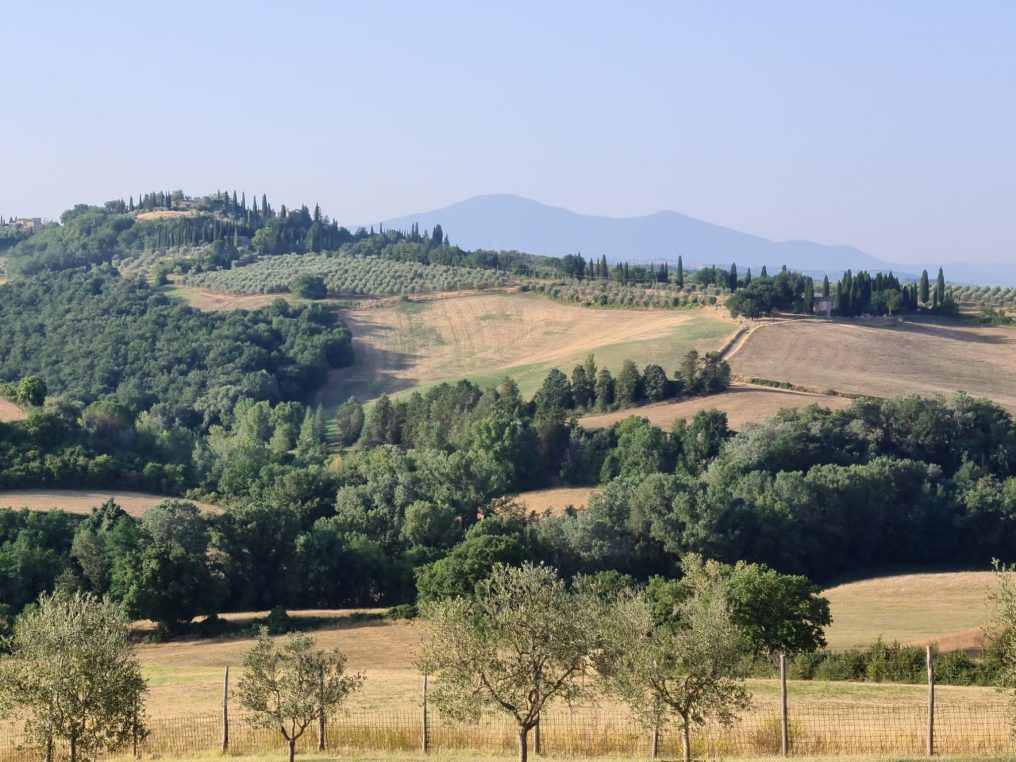 Sunday mass at Monte Oliveto Maggiore with seven priests, a bishop and twenty more Benedictine monks gave us a nostalgic taste for masses in latin and liturgical staging. The embroidered priests’ chasubles and the constant movements of the sacristan, made us feel we were at the opera with the perfume of incense on top. We had gone early for the 11 o’clock service to see the frescoes depicting the life of Saint Benedict, painted by Antonio Bazzi Il Sodoma.  The whole experience was so pleasing and lunch with fried fiori di zuccha was awaiting us at home! In the evening, two chamber music concerts played at la Foce were totally exceptional. Run by pianist Alessio Bax, the festival invites top soloists from all over the world. I was lucky to hear him and trumpet player Sergei Nakariakov play in Mozart’s Sonata in mi minor for piano and flicorno, a pretty sort of trumpet. 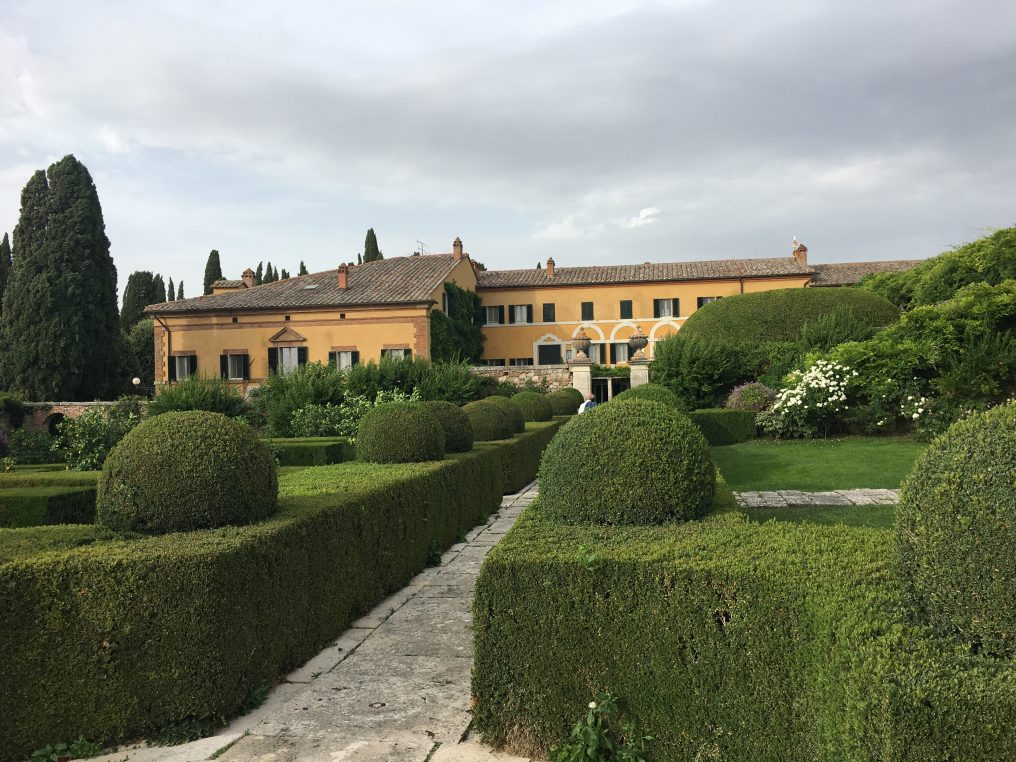 Their complicity was tantalizing and the audience was immediately conquered. Bax played with his wife Lucille Chung, Claude Debussy’s “Prélude à l’après-midi d’un faune” transcribed for four hands on the piano and Poulenc’s sonnet for four hands. The magical young Norwegian violinist Henning Kraggerud, played the trio by Felix Mendelssohn with Antonio Lysy (Iris Origo’s grandson) at the cello and again Alessio Bax at the piano.  He was definitely the “chéri” of the audience. All are accomplished musicians but what struck us in the public was that they were enjoying themselves and playing WITH each other. 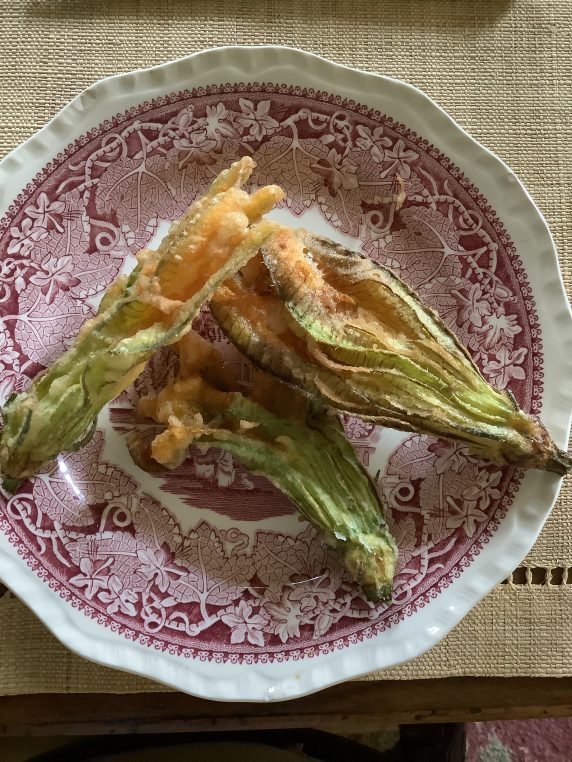 The next evening we heard the world première of Henning Kraggerud’s “Postlude 10 da equinox” for flute, violin, alto, cello and piano with flutist Emmanuel Pahud entering the stage. It was sensational. Later at dinner at the “Al Dopolavoro” cantina, we could applaud the musicians who were having dinner with their young children. It was a very normal life for very exceptional talents. 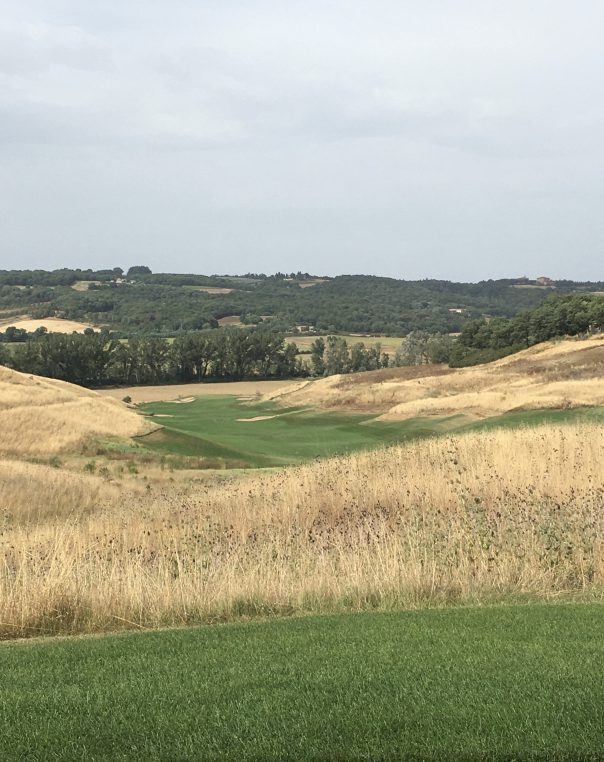 At the concert I met a golfing friend who invited me to visit Castiglion del Bosco, the winery and golf club created by Massimo Ferragamo with golf architect Tom Wiskopf. The course is modeled on American links and has striking holes with the beige roughs, green fairways and impeccable greens. The club house is elegant and modest and there is a wine club adjacent to it which allows members to keep their wine in a cellar. Access is completely private but visitors can play once if they stay in the hotel. 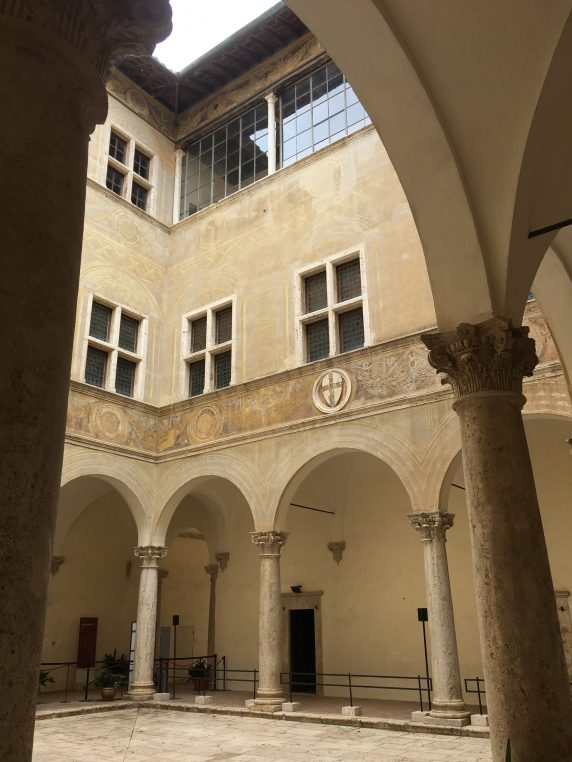 Inside Palazzo Piccolomini in Pienza

The visit of the Etruscan and Renaissance town of Pienza is a must. Just to see Palazzo Piccolomini facing Palazzo Sforza and the central place with the Duomo built in 1462 by Bernardo Rossellini. This is where Paul Verhoeven’s new film “Benedetta” about lesbian nuns was shot. An opera in the open was playing “L’Elisir d’Amore” on the central square, Pio II. 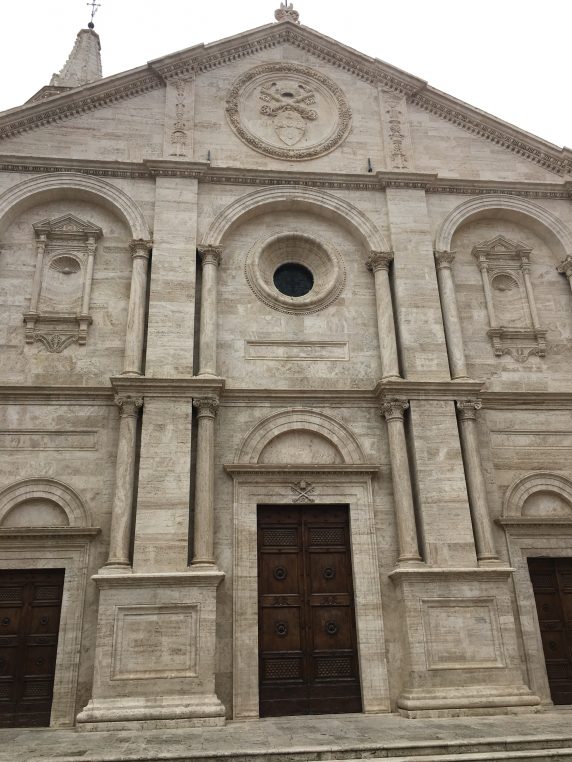 The Duomo di Pienza dates from 1462

Back to Fiesole and a delightful and simple dinner in a plant nursery LeLune,  which converts into an open air restaurant at night. You are surrounded by flowers and candles and children can run around at leisure. What a great idea for a green house! And as night was falling on the guests, magic doubled with candle light. The food is not exceptional but very cheap. 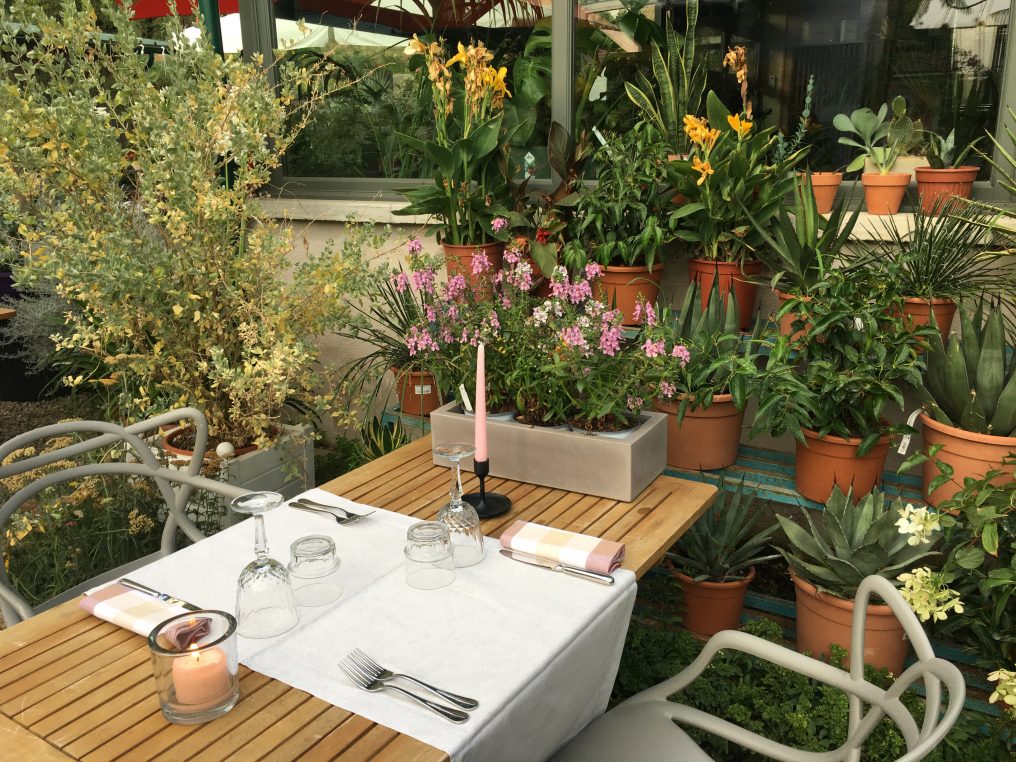 The restaurant LeLune in Florence is set in a green house

I could not leave this magical city of Florence without visiting the glass manufactory of Locchi, which is run by a single family. Their Medici vases and oil dispensers are the most refined I have ever seen. You can have any old carafe reproduced and the experience of chatting with Paola Locchi is unique. But not as unique as swimming in the pool cut in the rock of Monte Ceceri by architect Pier Niccolò Berardi, the designer of Florence’s train station, who partly reproduced this pool for the famous Villa San Michele in Fiesole. It belongs to a world which is slowing fading out and this is what I loved about Tuscany: time seems to have stopped running, life is always elegant with no screens and natural beauty. 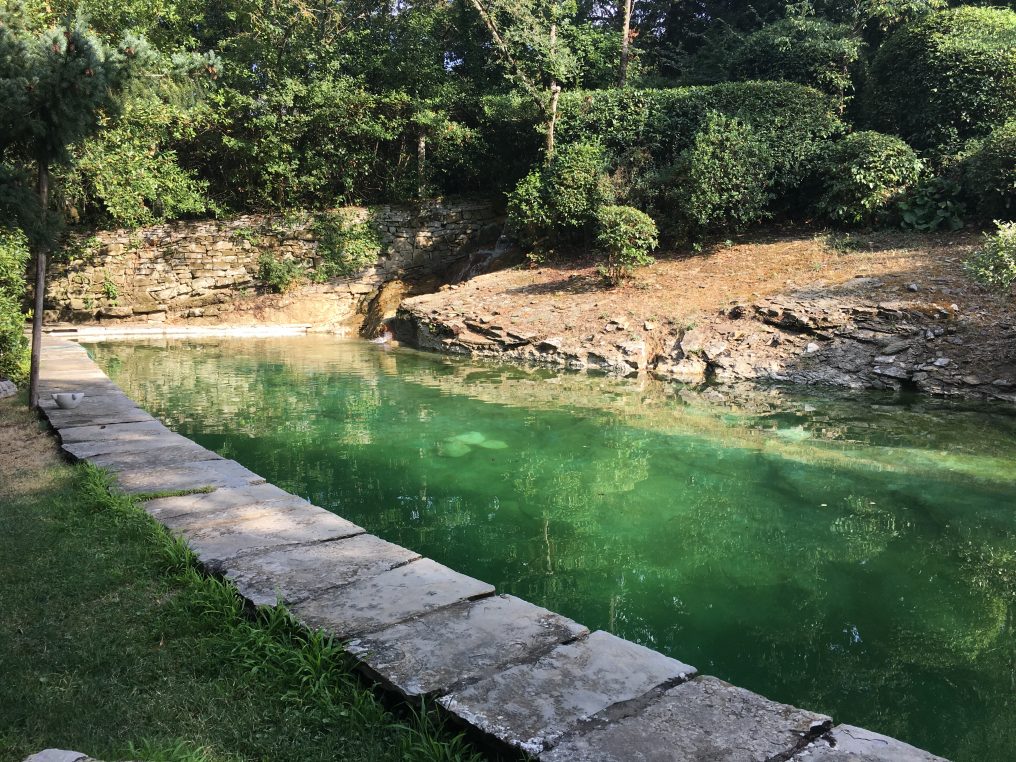 10 Comments on “Tuscany wins on every count!”