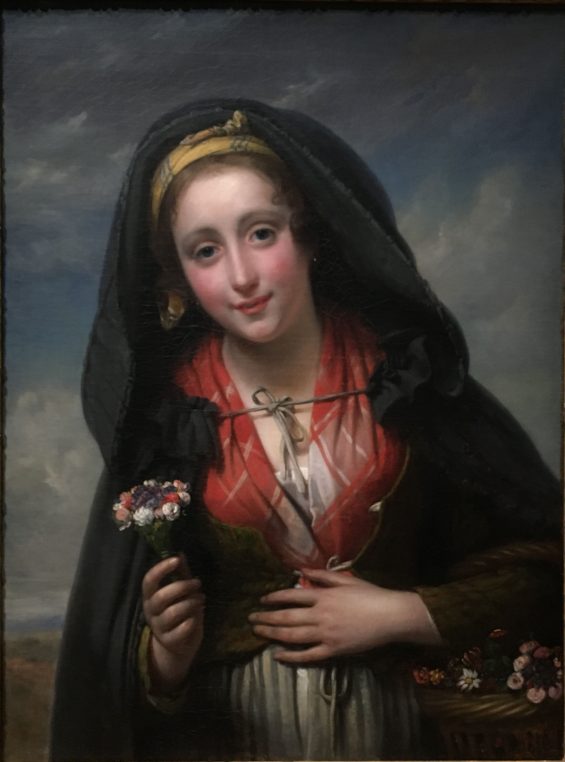 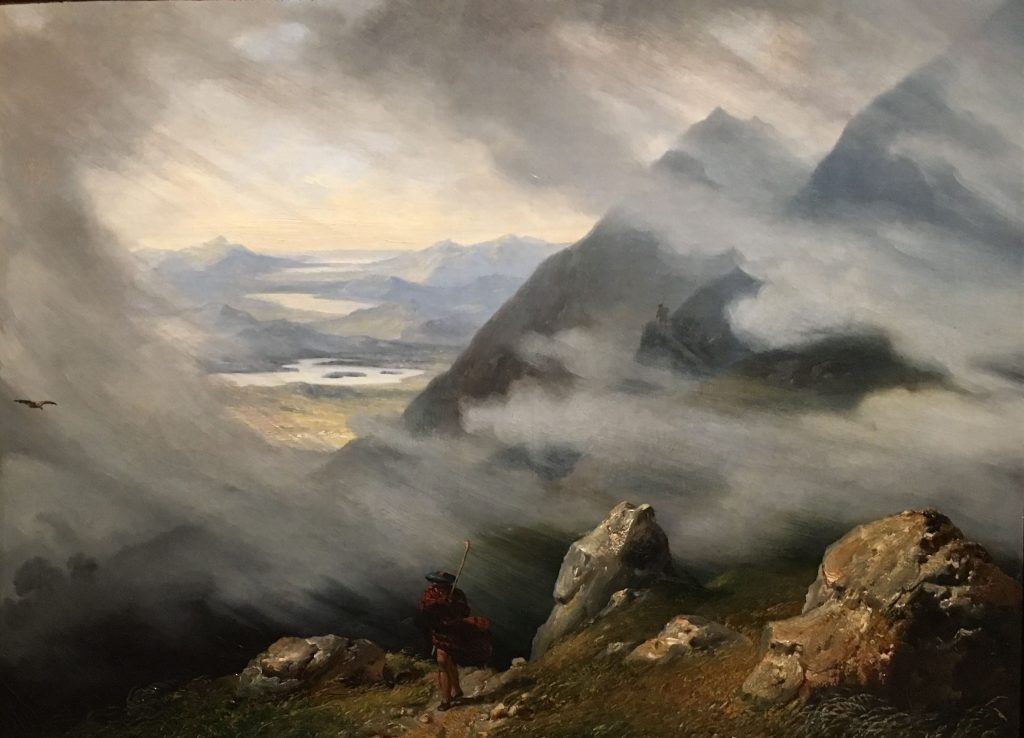 Once again, an exhibition opens at Petit Palais and the surprise is overwhelming in quality and originality. “Romantic Paris, 1815-1848” comprises all the arts of the beginning of the 19th century thanks to the clever Christopher Leribault who convinced his colleagues from Musées Galliera, Carnavalet, Arts décoratifs and de la Vie Romantique, to lend exceptional treasures. It is a panorama of thirty three flamboyant years of Paris life in 600 works, set in a magistral decor by Véronique Dollfus. You will discover so many little known painters and walk through incredible objects and sculptures, that your head will feel dizzy. 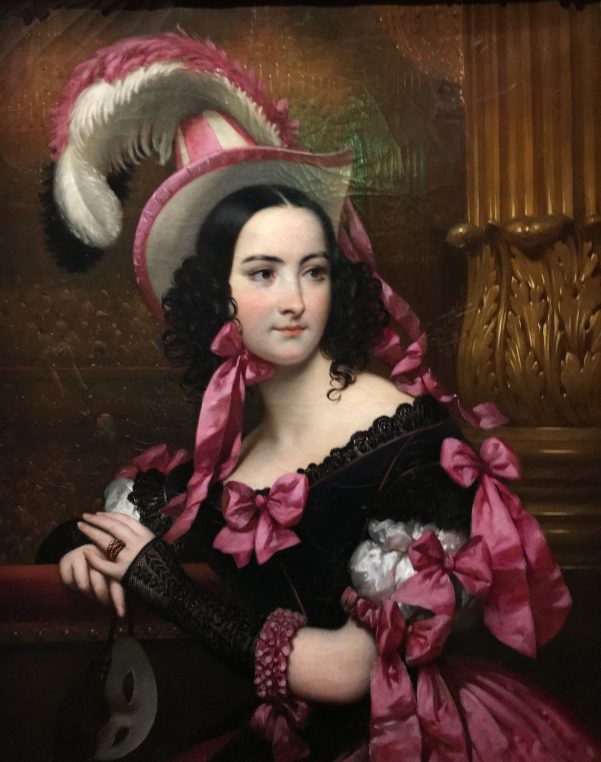 The show opens on an enlarged wallpaper with all the main monuments of the city of Paris, cows are grazing across the Seine from the French Academy and the Carousel du Louvre.  The decor is jolly and introduces the first period of the exhibition, the end of Napoléon’s world, in 1815. The Palais des Tuileries, Duchesse de Berry and Marie d’Orléans, the genius sculptor who died too young, follow in the next room. The Palais Royal is represented by a large model with its shops and beautiful architecture and a collection of dresses lent by Sophie Grossiord at Galliera stand majestuously in the next gallery. 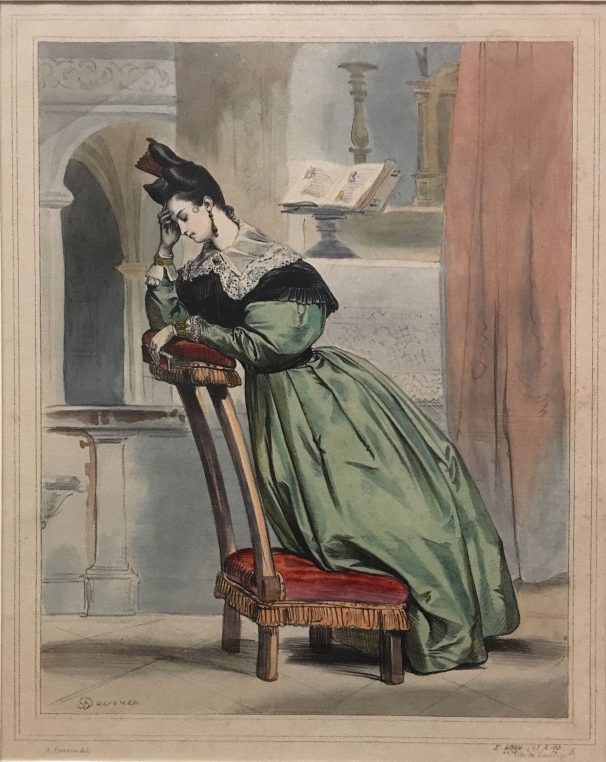 The annual salon des Beaux Arts at Musée du Louvre is wonderfully reproduced in a large room with paintings by Chassériau, Delacroix, Girodet and Ingres, hanging from floor to ceiling. And a ravishing portrait of Isaure Chassériau (cousin of the painter) by her uncle  Eugène Amaury-Duval brings lightness to the room. This reminded me very much of the Grande Galerie in Château de Chantilly where Duc d’Aumale hung his collection.

The superb “Christ au Jardin des Oliviers” by Delacroix (restored thanks to the Sauvegarde de l’Art français) dominates the room with, in the center, a group of sculptures by François-Joseph Bosio, Pierre-Jean David d’Angers, Hippolyte Maindron and Jean Duseigneur... The effect of density is spectacular. 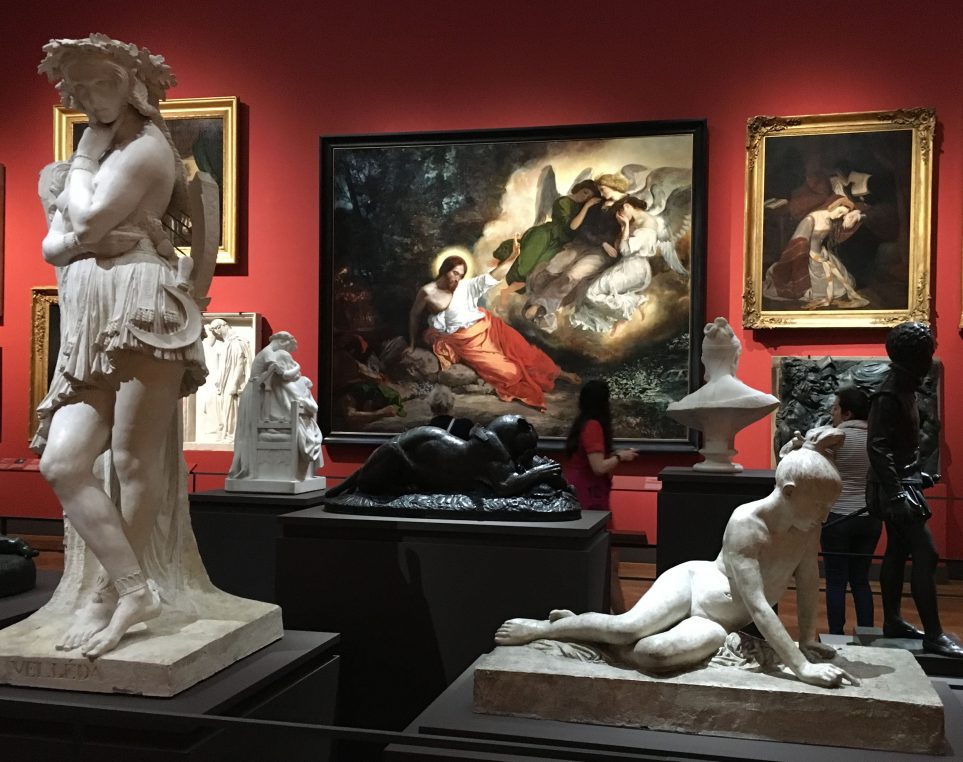 The admirable Delacroix in the back with bronze and plaster sculptures

The following room is dedicated to medieval revival with a beautiful clock in the shape of Notre Dame de Paris by Bavozet Frères et Soeurs, a celebration of Victor Hugo’s novel as well as a painting of Esmeralda, his sensuous heroin, by German painter Charles Steuben. A fun pair of gothic chairs by François Honoré Jacob-Desmalter is exhibited in front of the watercolor by Garneray representing the room for which they were designed in Comtesse d’Osmond’s private house, located at the very spot where Opéra Garnier now stands. 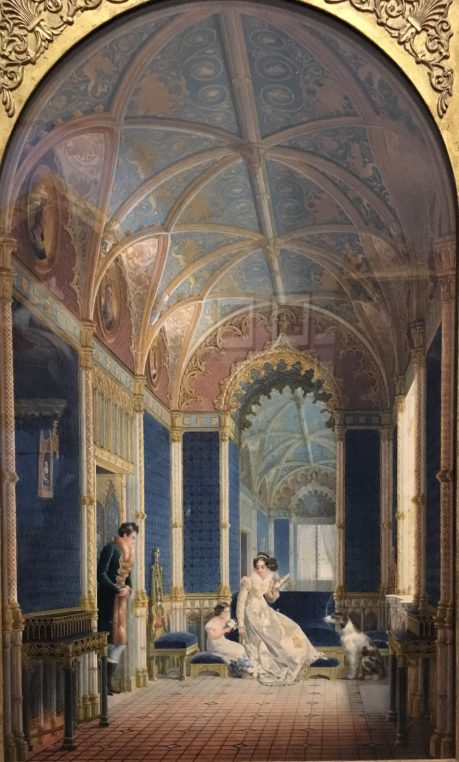 Then comes the Paris of Revolutions, with Daumier’s caricatures and a selection of paintings which recall the street battles in Paris in July 1830. Victor Hugo’s “Hernani”, Hector Berlioz’s “Symphonie fantastique”, bohemian life and the streets of la Nouvelle Athènes, near the Trinité church, open a new series of rooms where music (Chopin portrayed by Ary Scheffer) and literature (George Sand) meet the theatre and the arts. This section could have been organized at Musée de la Vie Romantique on rue Chaptal where the exhibition “Literary salons” is a little limited.

A beautiful room decorated with a Pleyel piano from 1830, six doors lavishly gilt from Hôtel Rothschild built in 1818 rue Laffitte, and a Renaissance revival vase in gilt bronze and colored glass, give an idea of the luxury of the period. 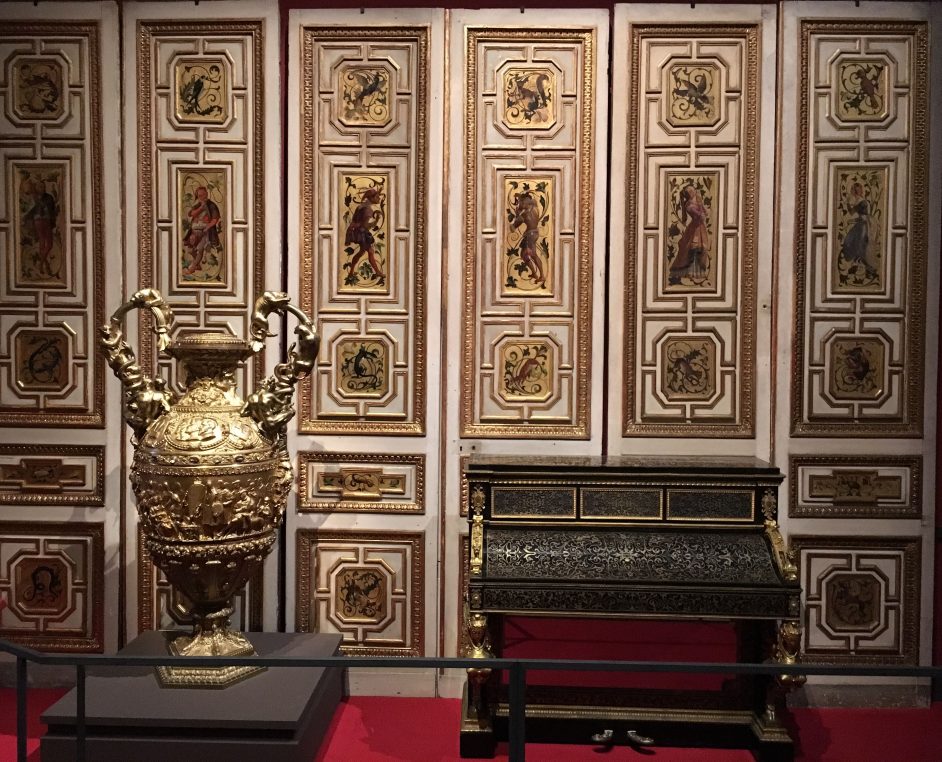 Doors are by Duponchet, the vase is by Chenavard and the piano by Pleyel

In the last rooms, the singer Maria Malibran, portrayed by Henri Decaisne, is seen near a beautiful Eugène Lami watercolor of the Foyer de la Danse, just after Marcel Saunier’s portrait of Don Juan and Haïdée  (the pirate’s daughter who welcomes Don Juan on a Greek island). 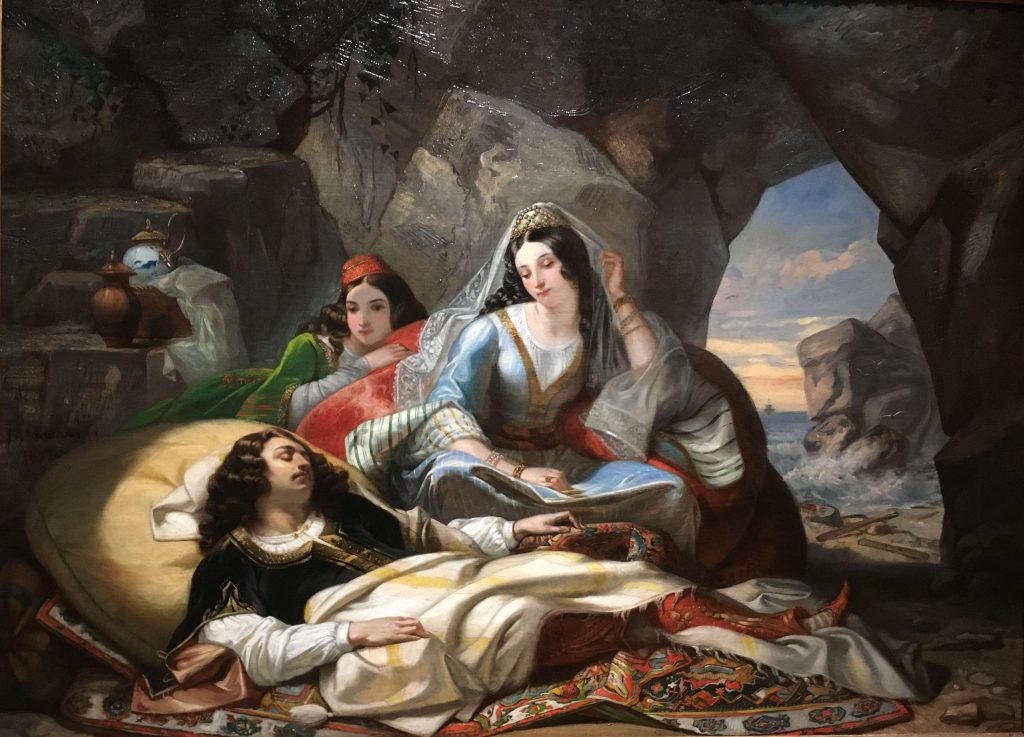 If I could, I would reproduce many more of the ravishing paintings and dresses, silk suspenders and glass clocks, china, fabrics, menus from the Palais Royal, furniture by Bellangé, etc… The mixture of official portraits and caricatures and daily life sceneries is very whimsical and there is not a moment of boredom in this exhibition, which should be seen with an intermission… because it is very large.

The new café and restaurant in the gardens of Petit Palais can provide a respite to your visit. And at 3 pm on most days, a concert is taking place on a period Streicher piano by young musicians selected by La Nouvelle Athènes pianos romantiques. 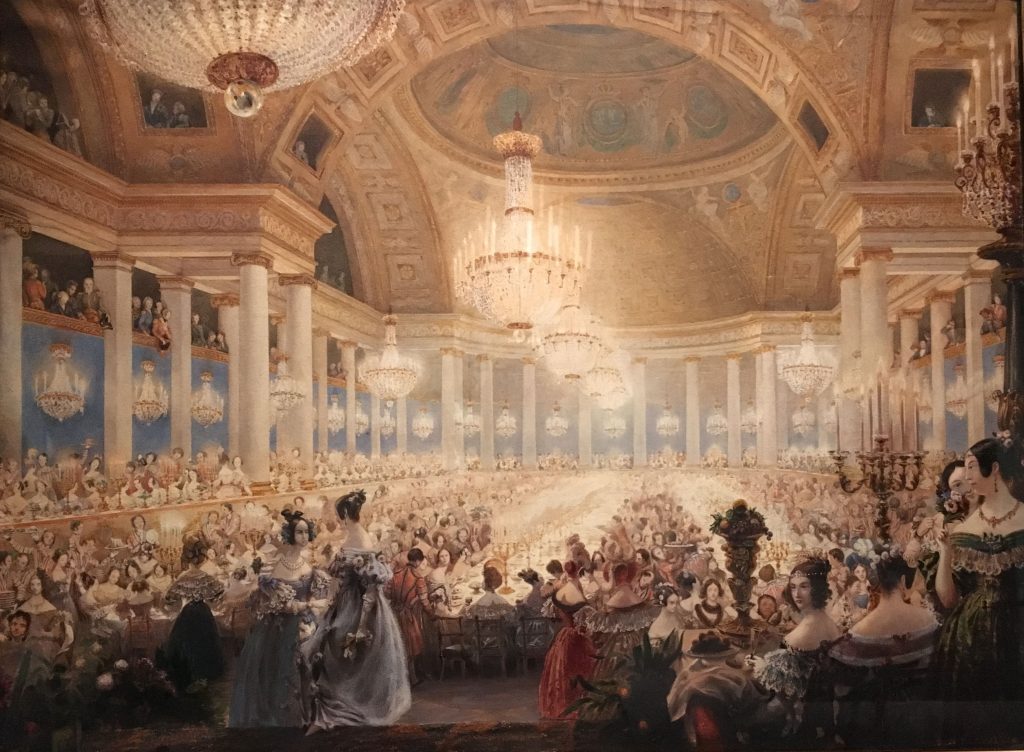 You can also go back a few times and complete your knowledge of Romantic Paris at Musée de la Vie Romantique where George Sand’s house awaits you with a beautiful garden planted by Catherine de Bourgoing. And an outside café… 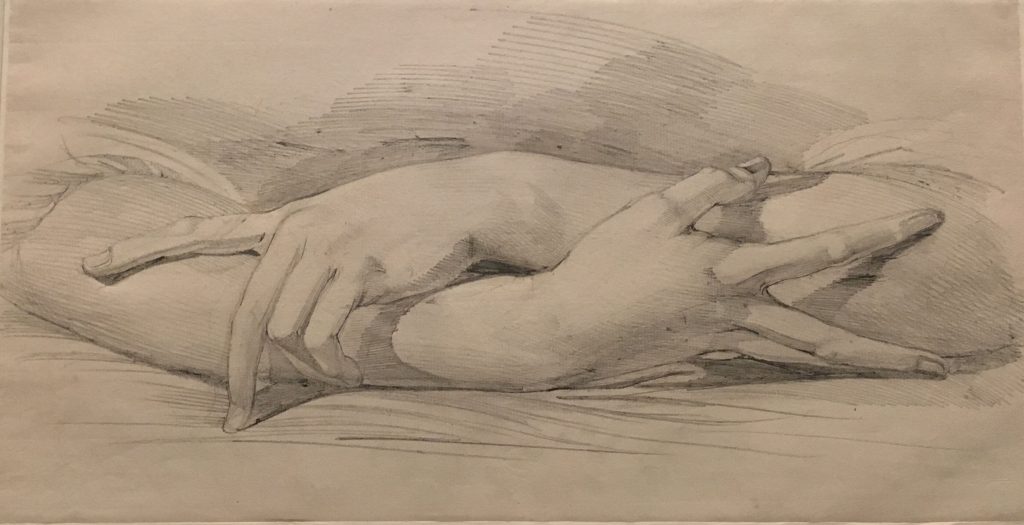 So plan a full day to see the Petit Palais where a few Ingres paintings from the Montauban museum  are  presently exhibited in the permanent collections.