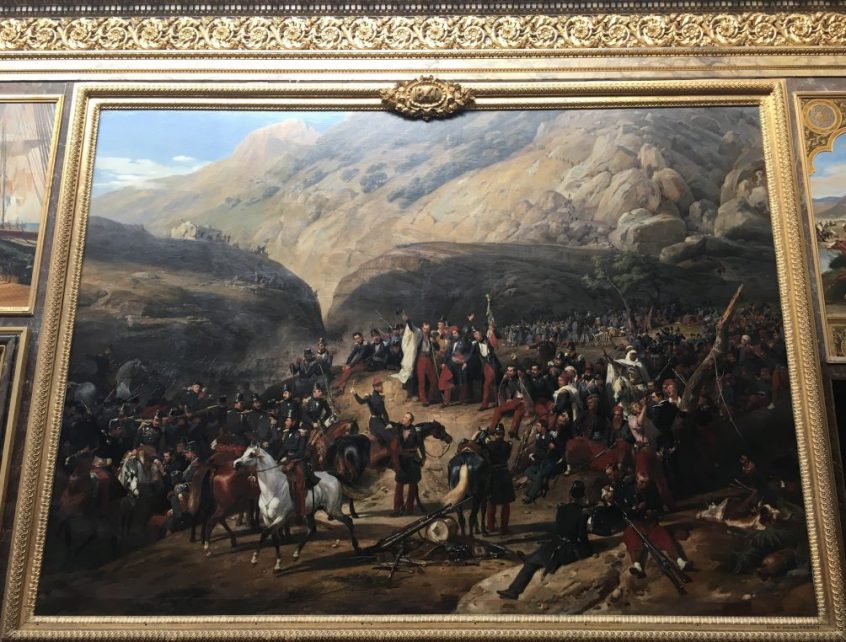 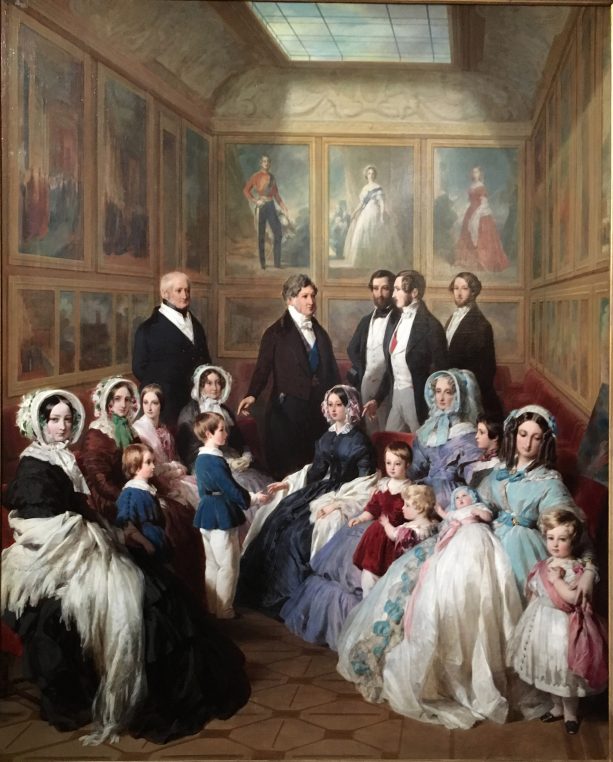 King Louis Philippe reigned in France from 1830 to 1848. During this time he made a point of transforming Versailles into a historical museum dedicated to all the glories of the country. To celebrate his work, Catherine Pégard, president of Château de Versailles, is opening thirty two new rooms and 5 000 square meters, where the historical galleries will be permanently open. This includes the African rooms with the wonderful fresco of Duc d’Aumale being victorious of Abdel Kader at 21, and exceptional decors in the Opera Royal and at Petit Trianon. A superb exhibition with only one challenge, getting into the castle without queuing… 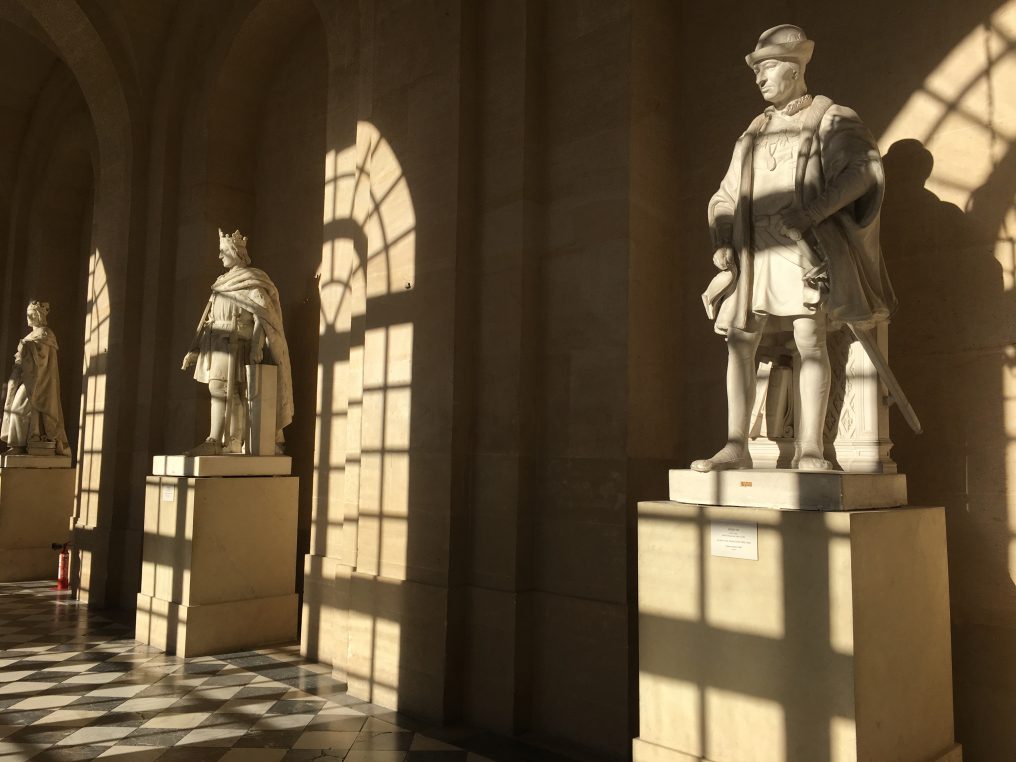 The gallery leading to the exhibition displays marble statues of Louis XI by Jaley and Charles VII by Seurre.

As always, you have to walk quite a long way to get into the exhibition but the pilgrimage is worth the effort. As Catherine Pégard and Laurent Salomé told us, Louis Philippe tried to compete with Louis XIV, building a galerie des Batailles with the great paintings which sum up the history of France. It holds thirty three paintings from Philippe Auguste to Henri IV and Austerlitz. And it is larger than the Galerie des Glaces with 100 m by 12 m. 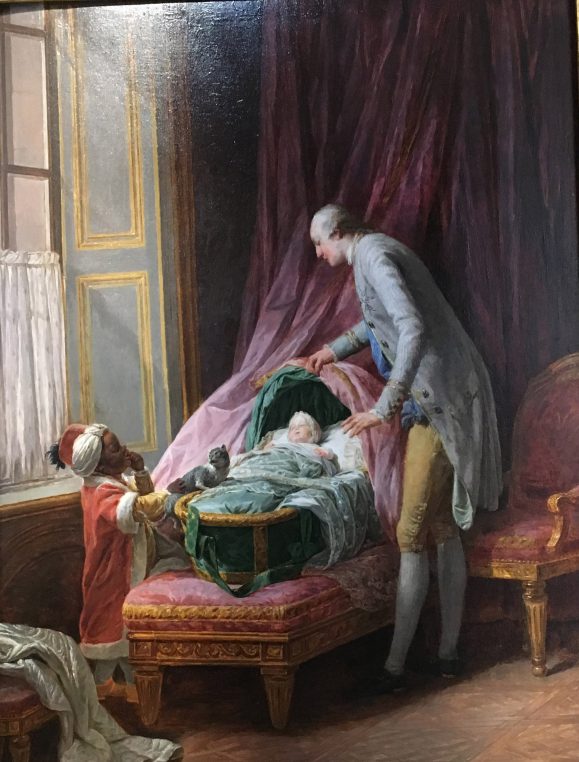 The five rooms devoted to the crusades, are filled with paintings commissioned to celebrate the 8 crusades from the XIth to the XIIIth centuries. Following with care the projects of Frédéric Nepveu, the royal architect, the king has thousands of paintings inserted in wood panelings. His passion for history and for art which he had developed at château d’Eu in Normandy, and which his son Duc d’Aumale will perpetuate in Chantilly, is visible throughout the exhibition. As a little boy trained by Comtesse de Genlis,  a liberal writer, he learned to love the different technics of furniture making and to understand the course of history. She had some miniature workshops made for her royal pupils with all the different instruments. 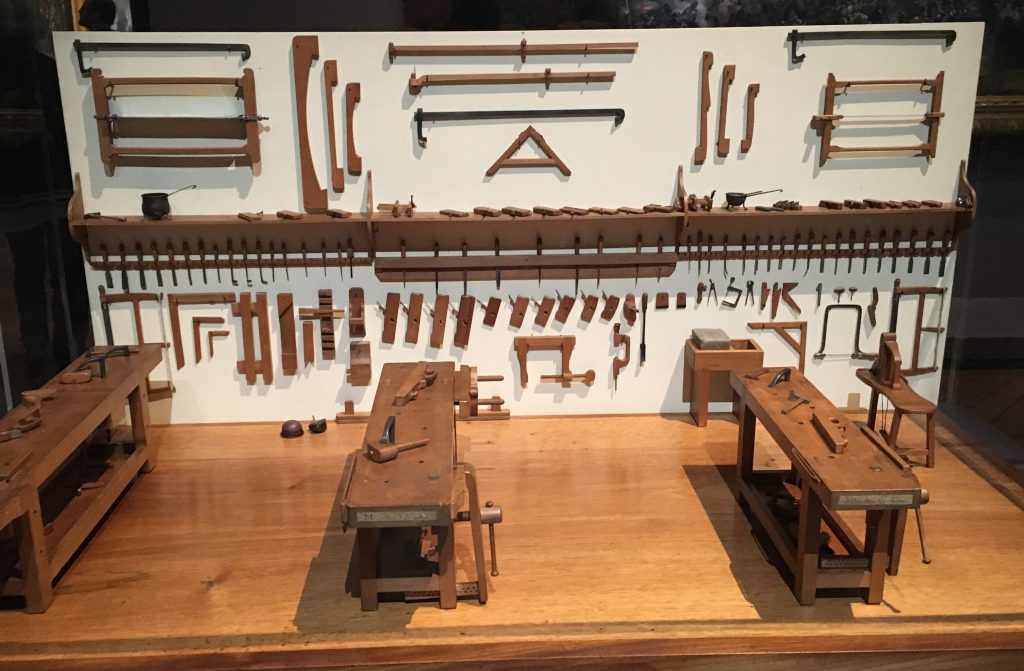 After telling us how Louis Philippe was educated, Valérie Bajou, curator of the show, shows us the expense of his travels and also his personal collections. Born in 1773, he had to leave France with his sister Adélaïde in 1793 when Louis XVIth death was voted by his father Philippe Egalité. He travelled to Germany and Scandinavia, then to the United States in 1796. He went to Cuba and to the Bahamas until 1800 when he returned to Falmouth in Cornwall. He will later go to Sicily and marry Princess Marie Amélie de Bourbon- Siciles. He returns to France in 1814 after the fall of Napoléon, a perfect anglophile. 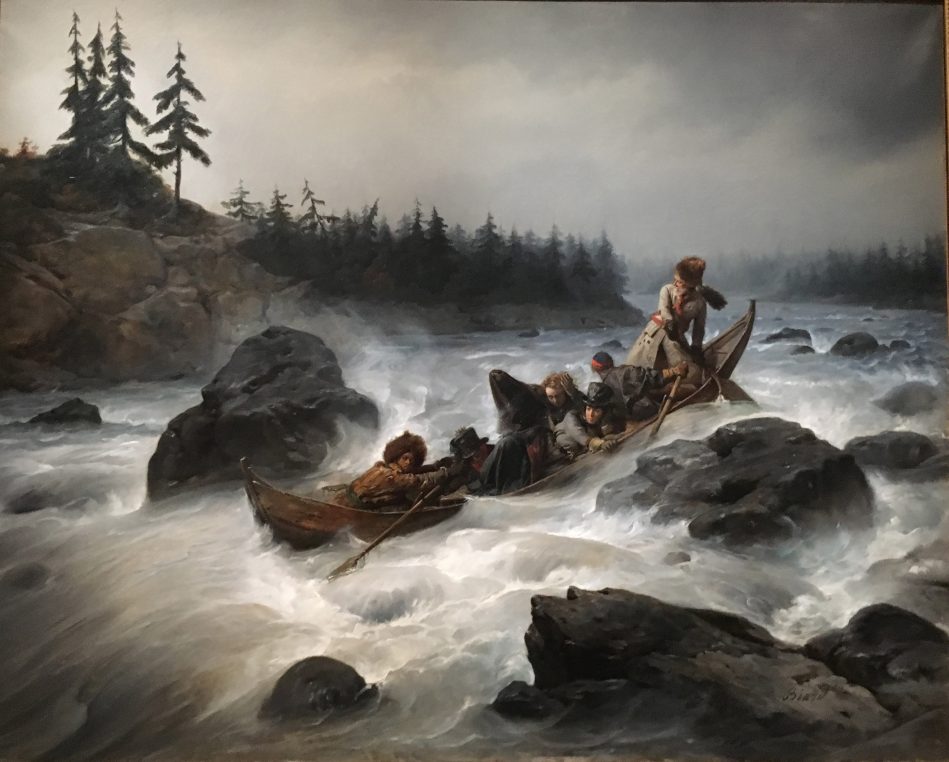 Most of the works he commissioned, of battle scenes but also of his travels to Switzerland were painted by Horace Vernet. This includes the official “Louis Philippe leaving the Royal Palace” (Palais Royal) for Town Hall on July 31, 1830 which is an amazing painting. The King with his five sons leaving Versailles on horses in 1837, is another fabulous work which one can see at the entrance of the exhibition. 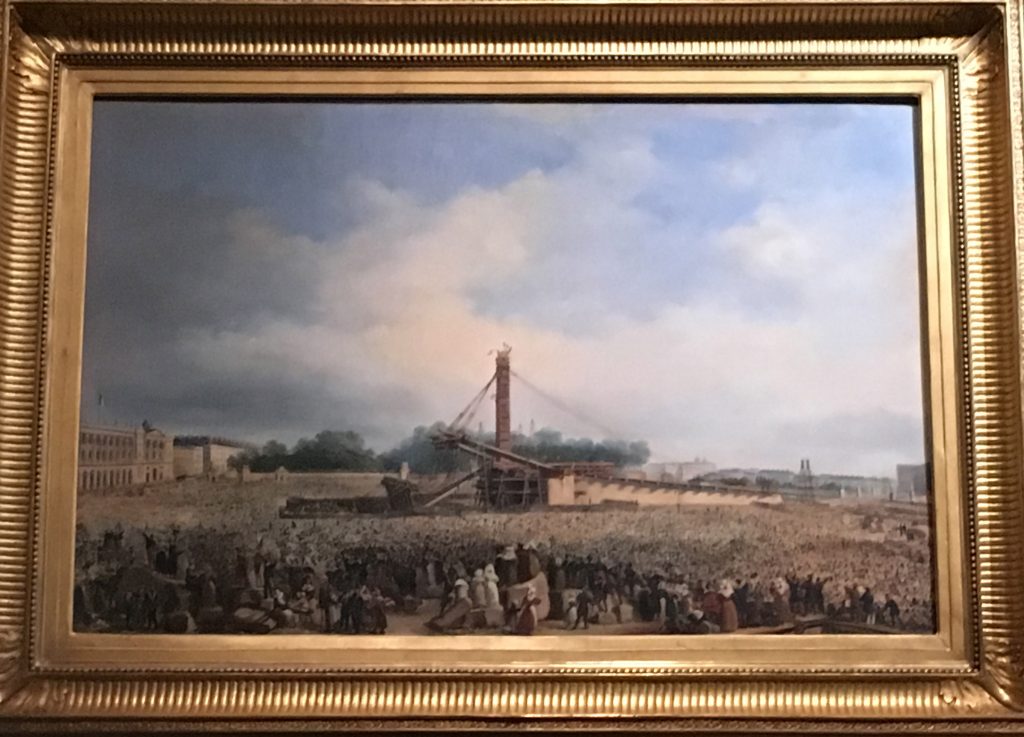 An important part of the show is devoted to Queen Victoria’s visit at château d’Eu to celebrate the Entente Cordiale in 1843. The following year the King visited her at Windsor. Franz Xaver Winterhalter and Eugène Lami are the two major witnesses of these fastuous visits. And we get to discover the china and different decors created on these occasions. When I looked at the tea set created by Sèvres for Eu, I noticed that the cups had the size of today’s mugs. How funny! 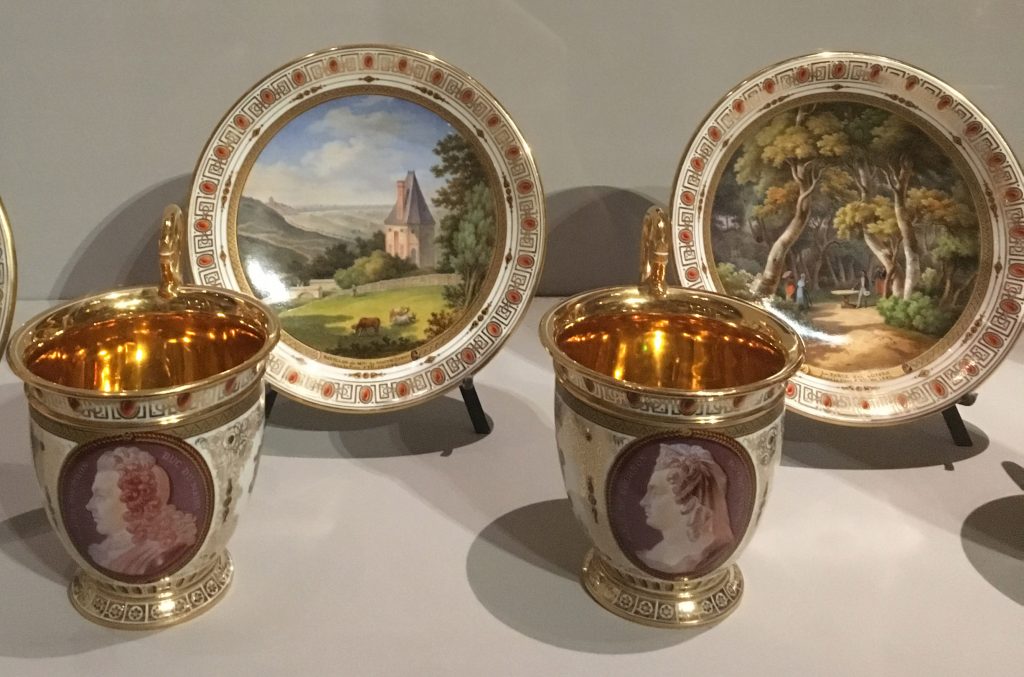 The very large paintings of the African rooms with the Algerian odyssey of duc d’Aumale, are probably the greatest surprise of the show. But the architectural drawings of Versailles’s transformation are also very fascinating. Hubert Le Gall‘s scenography is well thought out with a few decors and a great fluidity between the rooms and the periods. He has transformed a historical show into a beautiful and meandering walk through the palace. 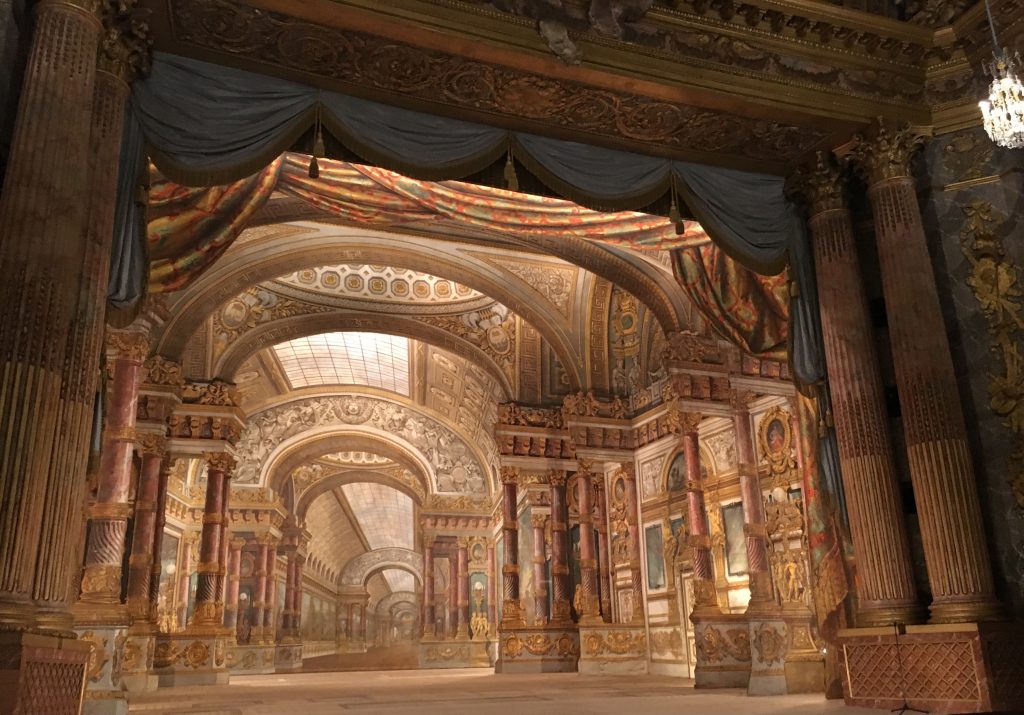 You can take advantage of this exceptional exhibition to go to the Royal Opera and book one of the concerts or baroque evenings including many Christmas shows.

The exhibition, “Louis Philippe and Versailles” is until February 3, 2019. You can drive (30 mns) from Paris or take the RER (20 mins) from Invalides. Book in advance, register in a tour, or be prepared to queue. Château de Versailles opens at 9 am and is closed on Mondays.

One Comment on “Versailles and Louis Philippe, a long history”