We were so early at Versailles for the opening of Charles de La Fosse’s first ever exhibition, that we decided to indulge in a couple of mojitos at D’Paris, the closest bar to the Cour d‘honneur, on the right hand side of the palace. The atmosphere there at 6 pm, is so different to that of the Château, that we were enchanted, my friend and I, to discover a naughty side to the city. 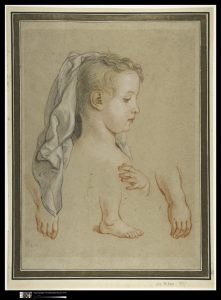 So it’s with a very light heart and flying feet that we walked into the Royal chapel which was exceptionally opened, so we could discover from the top gallery, the Resurrection of Christ  painted on the ceiling by Charles de La Fosse (1636-1716).

Clémentine Gustin Gomez, the curator for the show « Le Triomphe de la couleur», published 8 years ago the catalogue raisonné of Charles de La Fosse (Ed. Faton) under the close supervision of Pierre Rosenberg. She was beaming with happiness after two years of hard work, getting the 70 paintings and drawings together. 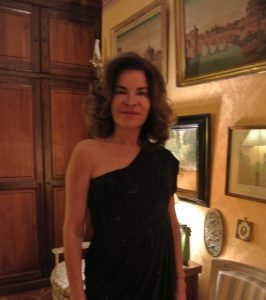 The exhibition finishes on a blue note with the Consecration of the Virgin  (photo D.Saulnier)

The result is a beautiful walk through the Salon d’Apollon, with stops at salon de Diane for “le Sacrifice d’Iphigénie” and others… which are part of the decor of Versailles. The show itself is conceived for complete neophytes like me and the cartels describe synthetically the evolution of the Master from reinventing color (he was influenced by Flemish and Venitian painters while spending five formative years in Italy) and developing the art of drawing with three colors.

Often described as the link between Le Brun (whom he succeeded to at court) and Watteau, La Fosse was Louis XIVth official painter and a close friend of Louis-Hardouin Mansart, the famous architect. He died at 80 in 1716, just one year after the King.
Marc Fumaroli from Académie Française was handsome and happy, discussing his latest book « la République des Lettres » (Ed. Gallimard) with his own court of admirors. Catherine Pégard, the efficient President of Versailles, was joking with writers Bruno Racine and Alexandra Lapierre. Alexandre Pradère and Etienne Bréton, the 17 th and 18 th century experts were being witty as usual, Olivier de Rohan who used to run the Friends of Versailles, felt at home and Pierre Rosenberg, proud of his former student, had fully recovered from falling down the stairs in his apartment. Many lenders were there, from all over Europe and Russia, and the Palace had never looked so beautiful at night. (until May 24)