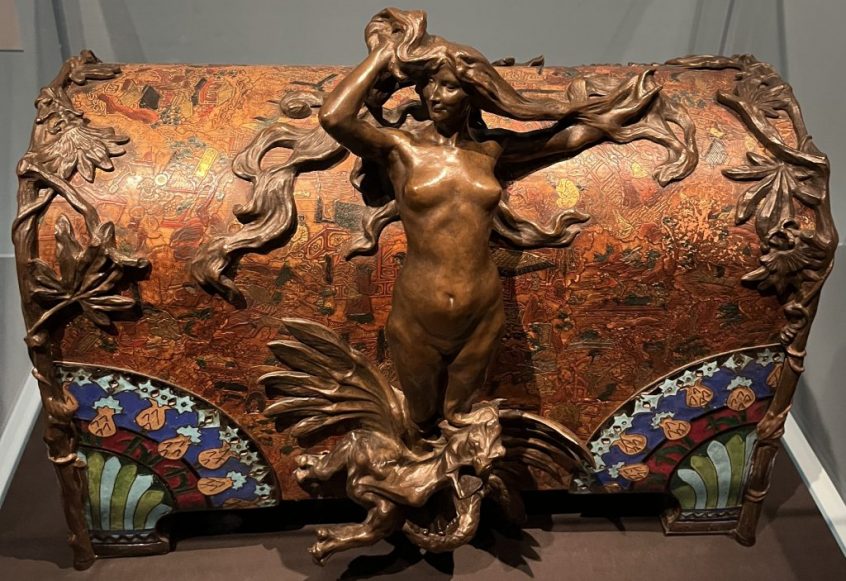 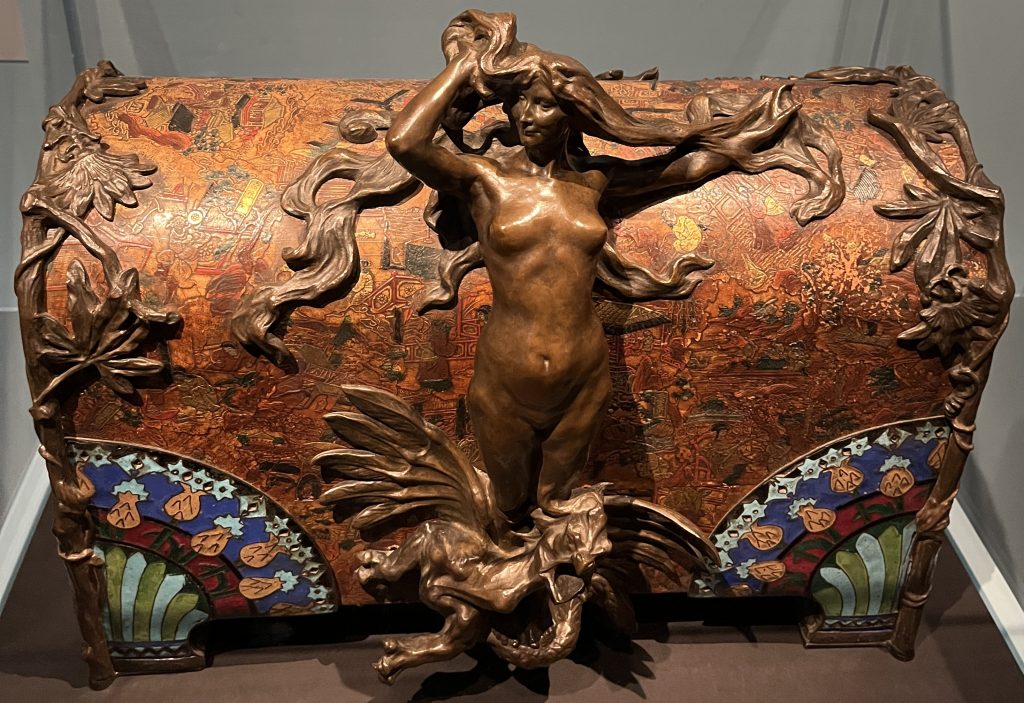 Most of us know Jean Prouvé‘s work as a furniture designer and an architect who revolutionized low income housing in France between the wars. This new exhibition at Musée de la Carte à Jouer (the museum of playing cards) in Issy-les-Moulineaux is about his father’s work, Victor Prouvé, 1858-1943, who started as Emile Gallé‘s accomplice in designing vases and became a successful public space decorator as a member of l’Ecole de Nancy, the movement which introduces art in the industrial process. He is the author of a large fresco in the staircase of Issy’s townhall called “La Vie”, life. All the preparatory drawings are shown here with book bindings and numerous Art Nouveau objects which throw a new light on this artist, whose reputation is slightly obscured by his son’s fame. 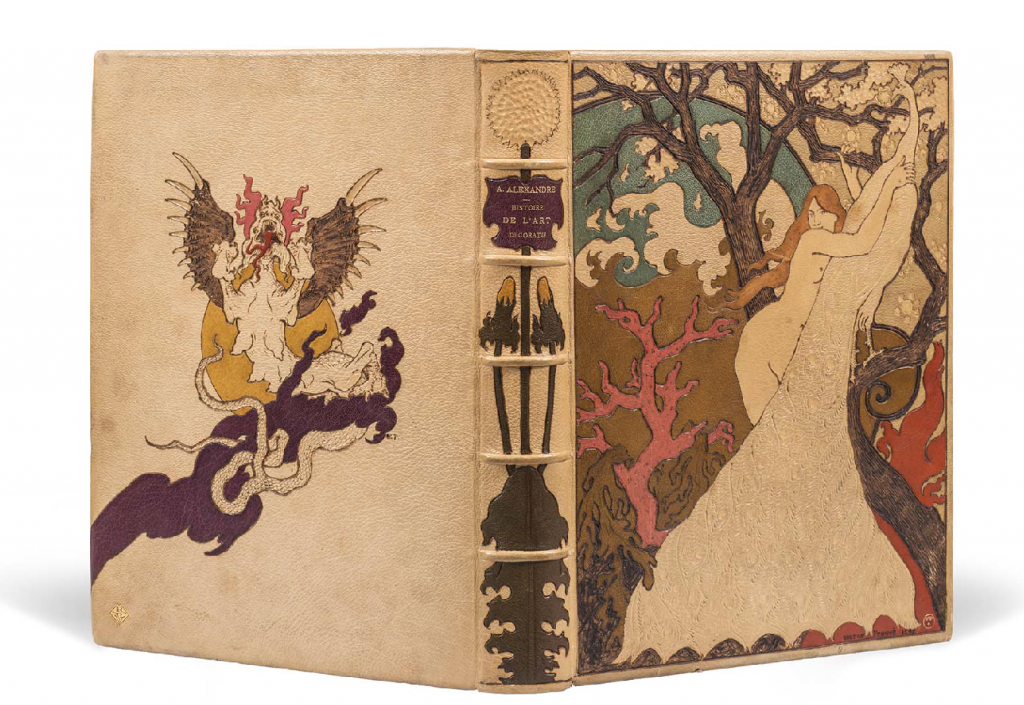 Victor Prouvé was raised in Nancy and studied at the Beaux Arts with Alexandre Cabanel. Very soon he started collaborating with other artists such as Emile Gallé, who was his son Jean’s godfather and he created designs for embroideries and wood furniture. He competed for the decors of l’Hôtel de Ville in Paris and was rejected. But from this failure came an order for Issy les Moulineaux, a town in the immediate suburbs of Paris, which was being industrialized at the time and has now become a very rich extension of the 15 th arrondissement thanks to its mayor since 1980, André Santini, now 82 years old. 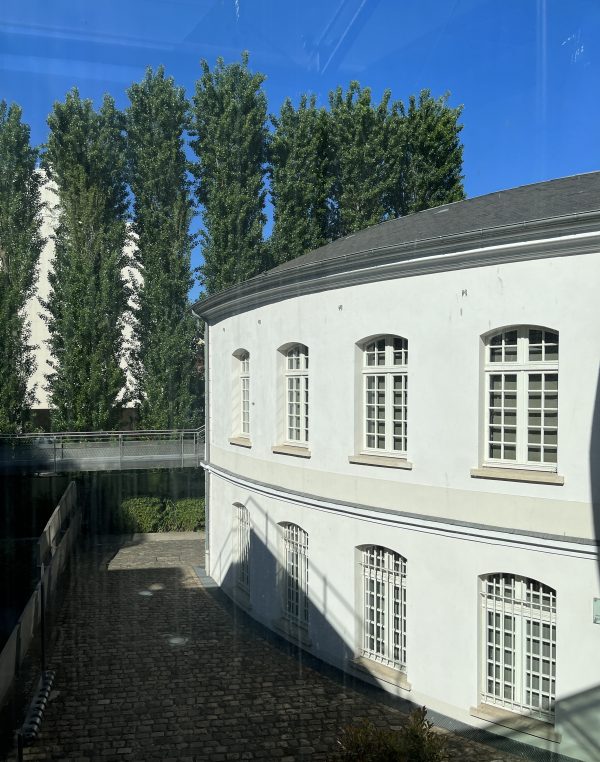 In Prouvé’s times, Issy had a famous brewery, a power plant, a tobacco company, an industrial laundry, and mostly a famous airplane strip with star pilots. Today it houses the headquarters of Microsoft France, Eutelsat, Sodexo and many more tech companies. Prouvé’s work corresponds to the industrial development of the town which is one of the richest suburbs of Paris with a strong social politic. The public housings are among the best in the Paris area and the music conservatory is also well known. I you go on a Wednesday morning, there is a wonderful market on place de la Mairie. 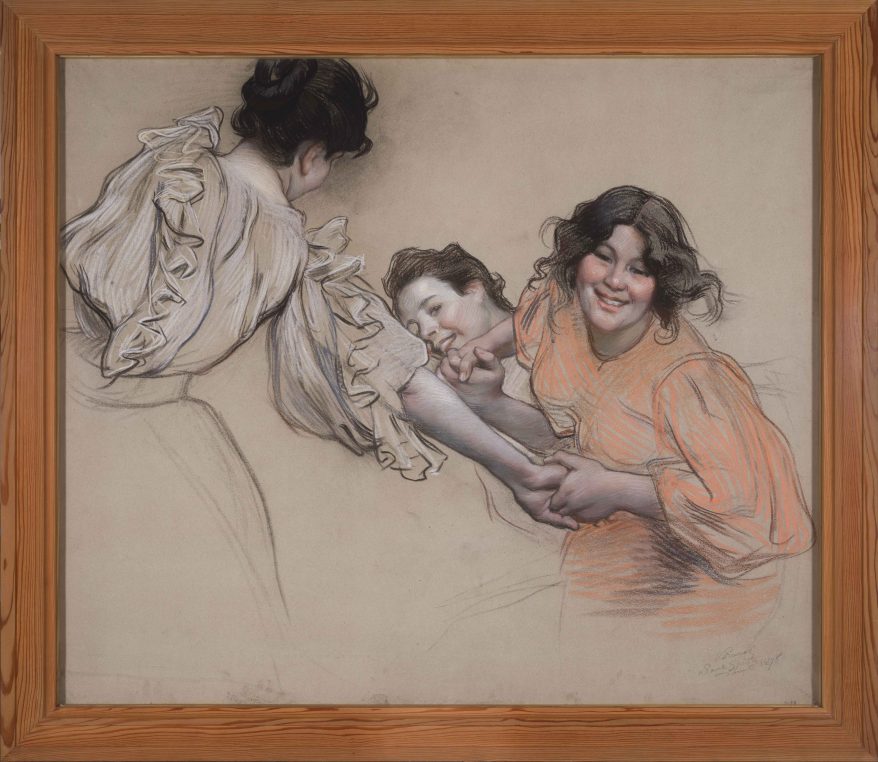 The little museum of Carte à Jouer acts as a historical museum with the history of the Prince de Conti’s property in Issy. The young curator of the show Charlotte Guinois spent the last three years overseeing the restoration of the Prouvé large painting “La Vie” in the staircase of  Hotel de Ville. It was ordered in 1896 and all the drawings and two pastels are shown.  It is particularly interesting to see Victor Prouvé’s works when you know his son’s huge career. 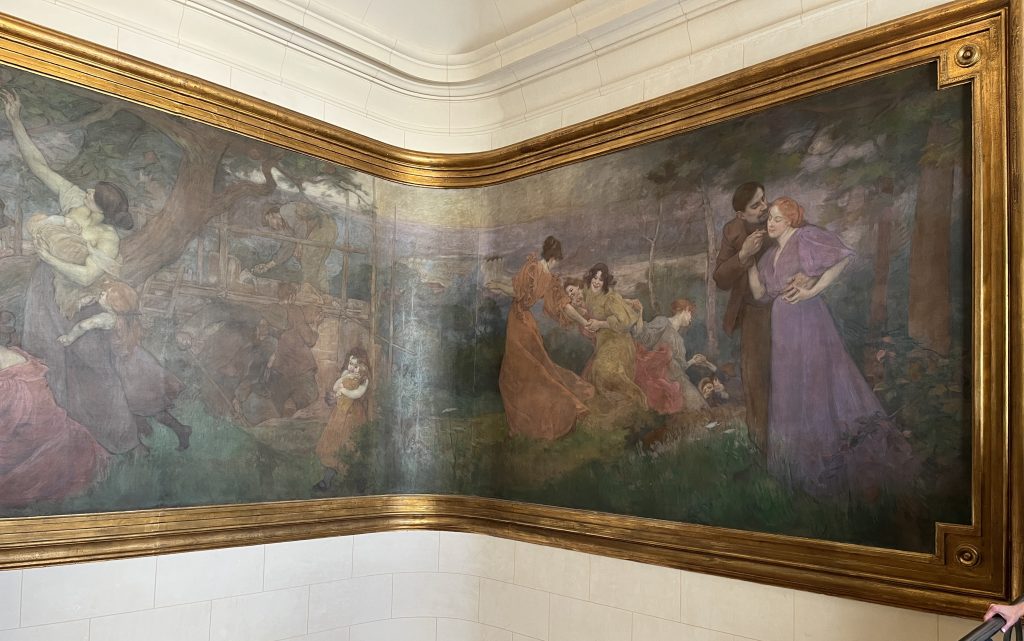 La Vie, in the staircase of town hall in Issy les Moulineaux

“Victor Prouvé, Master of Art Nouveau in Issy“, Musée de la Carte à Jouer, until August 14. It is very easy to reach with the metro Mairie d’Issy, 15 mns from Montparnasse.

4 Comments on “Victor Prouvé, the father of… in Issy-les-Moulineaux”