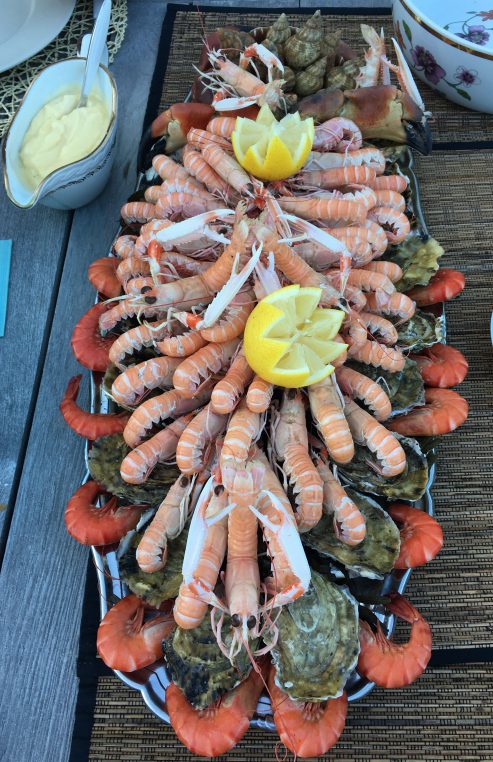 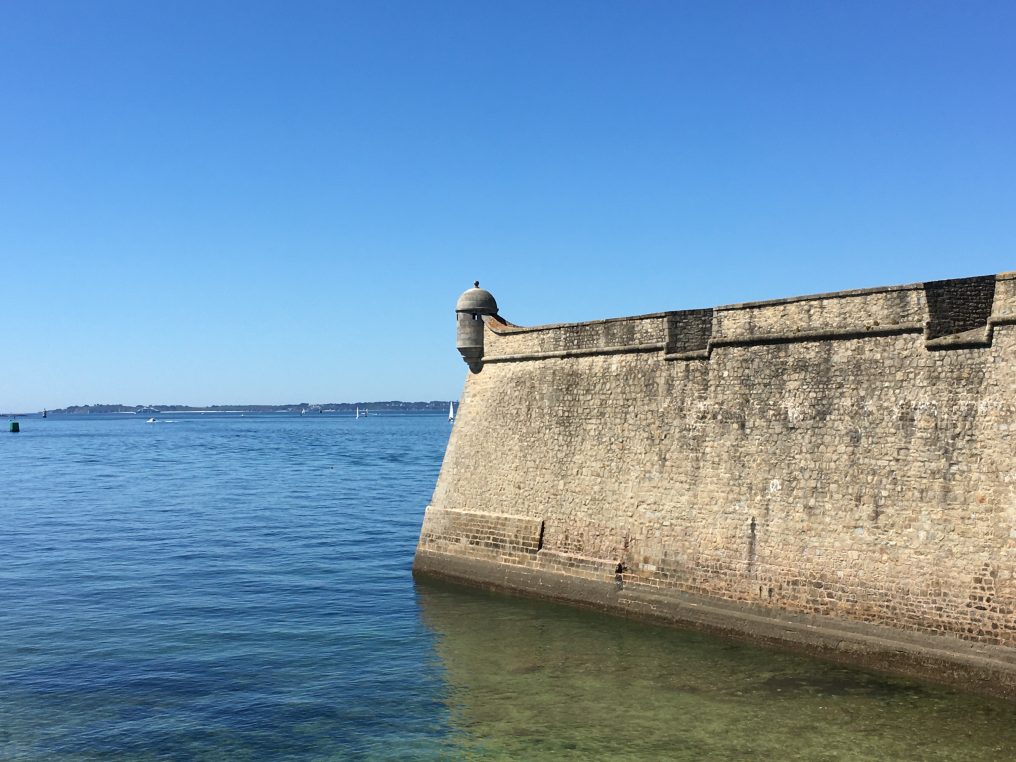 The citadel in Port Louis near Lorient, where the Musée de la Compagnie des Indes is housed

There is nothing I love more than getting into my small car and driving around France, stopping over at dear friend’s houses. The Bottin Mondain (social register) started a new addition of castles listed by area, and it would be tempting to just try and tour France according to this list but I have not dared it yet. I just spent ten days in Brittany and it was enchanting. Not only because the sun was setting at 10 pm allowing for long dinners outside, but also because of the brisk air, the fabulous shellfish and pancakes, and the huge sense of hospitality of Bretons, which make it a real holiday. So here is the itinerary I recommend.

Langoustines, oysters, crab and shrimps at the fishmonger Gwennael Pennarun in Sainte Marine

I started out staying with Mélanie and Bruno Troublé, the America’s cup skipper for Baron Bich, who is organizing the Prada Cup Challenger Selection Series of the 36 th America’s cup,  from January 15 to February 22 in Auckland, NZ, next year. They sail in the baie du Morbihan and Bruno had just been visiting his sister Agnès B. (the famous fashion designer), on Ile d’Hoedic sailing back against the wind and beating all other boats! This incredible sailor who  created, with Henry Racamier, the Louis Vuitton cup, enjoys competing on small sailboats just as much. 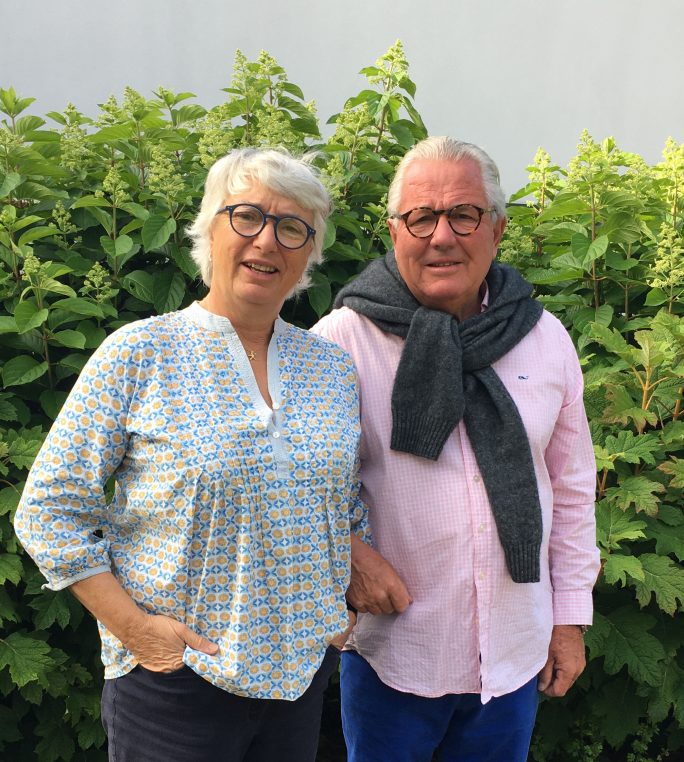 Mélanie and Bruno Troublé a home near Vannes

I went on to Ria d’Etel, near the well known village of Saint-Cado, to visit glass sculptor Matei Negreanu and his long time companion Hervé Claude, a former anchor on television turned thriller writer. The ria is very special for it is an enclave of the sea and looks like a lake most of the time, except for the tides. 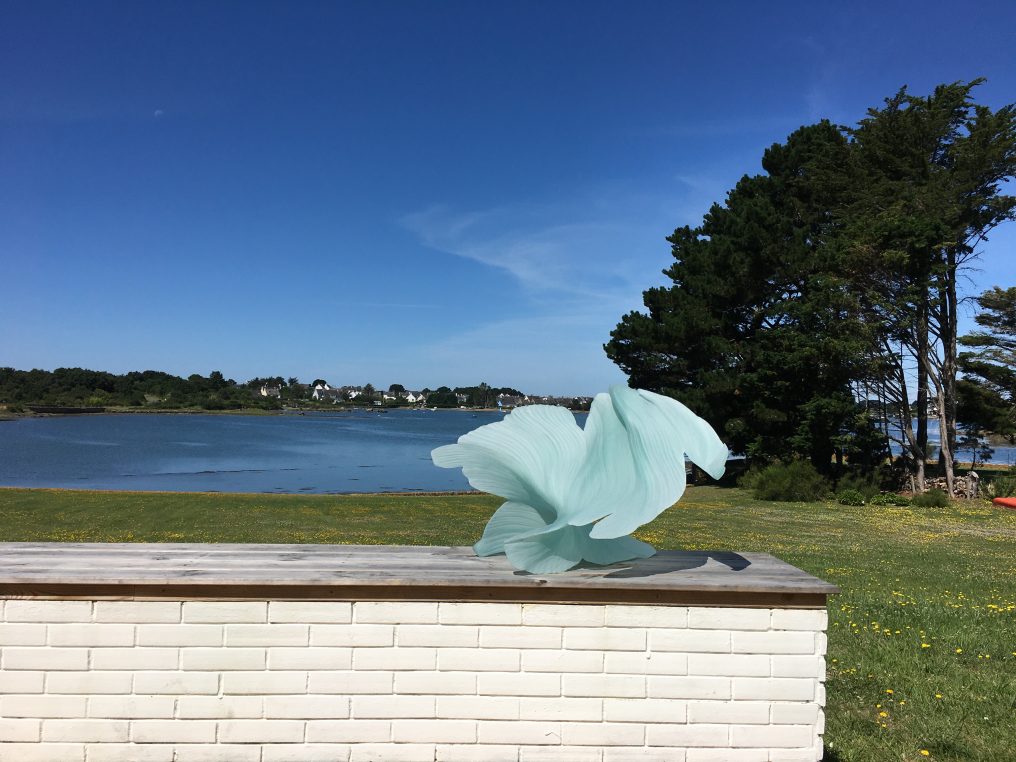 From there I visited the beautiful citadel and Musée de la Compagnie des Indes in Saint Louis, which traces back the huge adventures of French, Dutch and Portuguese navigators in the XV th to the XVIII th centuries. The Silk Road of course but also, the importation of zinc, spices, blue china, furniture, and general trade between the western and eastern coasts of Africa, all the way to Japan with the establishment of trading counters in Aden, India, Indonesia, Macao and China. 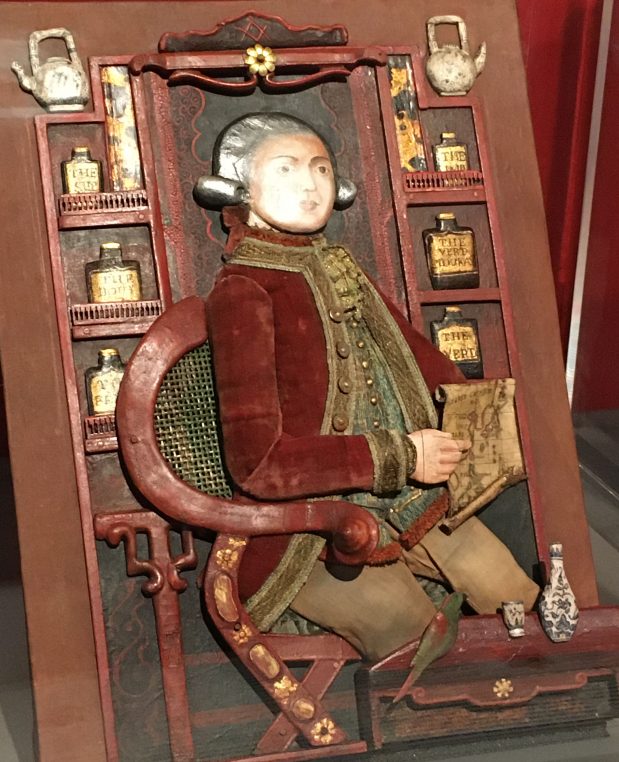 Young trader for India in Nantes, with all the goods he imports and masonic emblems, 1775-1780

You can see there a sextant and an octant, instruments to measure navigation routes from 1775, follow the submarine digging of sunk ships, and dream about this magical adventure where so many brave navigators lost their lives and their ships. Lorient is the city where boats left from and where they brought back their treasures which were auctioned on the harbor. An illustration shows the Guinean harbors in Africa. An engraving by English painter George Morland depicts the “Execrable human traffic” exhibited at the Royal Academy in 1788. It is the first pictural condemnation of the slave trade.  There are betel boxes, and precious caskets in silver, ivory or turtle shell. 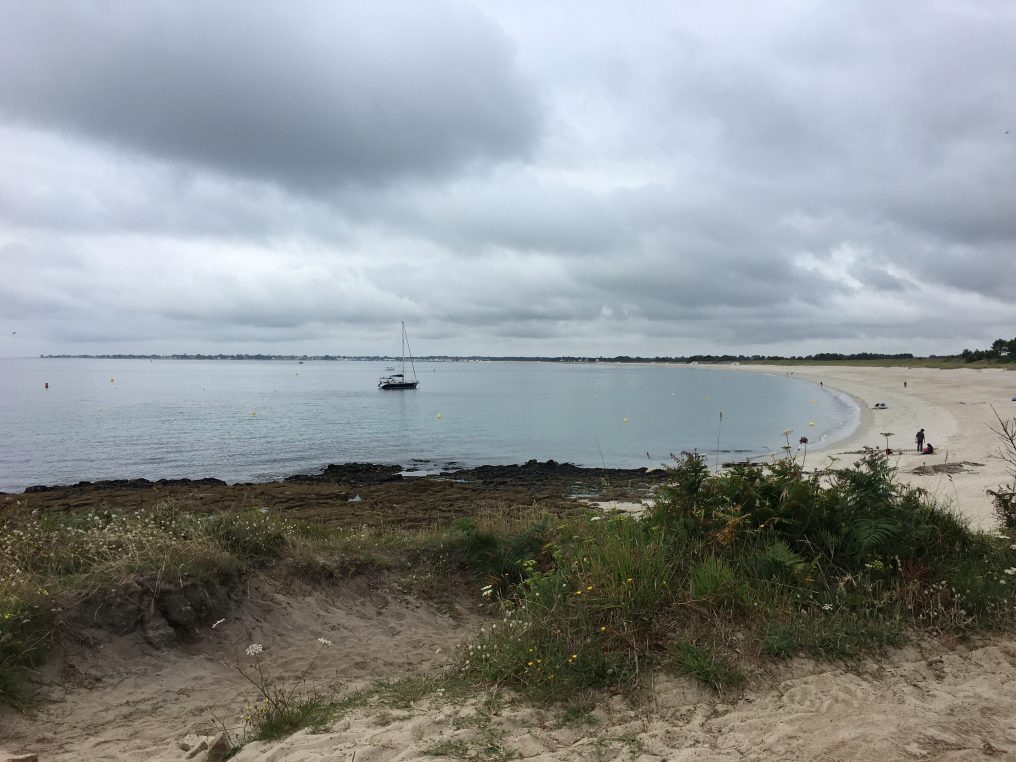 Driving north to Quimper, I passed the museum of Pont Aven which was unfortunately closed on Mondays and landed in Sainte Marine, where I found a “tropical” looking garden and the best fishmonger I have known for a long time. Lobster and langoustines are caught locally and bought in Guilvinec at la criée (morning auction). The very long beach was incredibly beautiful even during the crowded Bastille day week end, and life in the harbor is always intense around the Café du Port where the 32€ menu is delicious. A stop at Le Minor in Pont l’Abbé where the tablecloths are just irresistible completed the stay. Bought last year by a new team of contemporary art passionates, the shop has been revamped in the best way and the designs for linen have exploded! 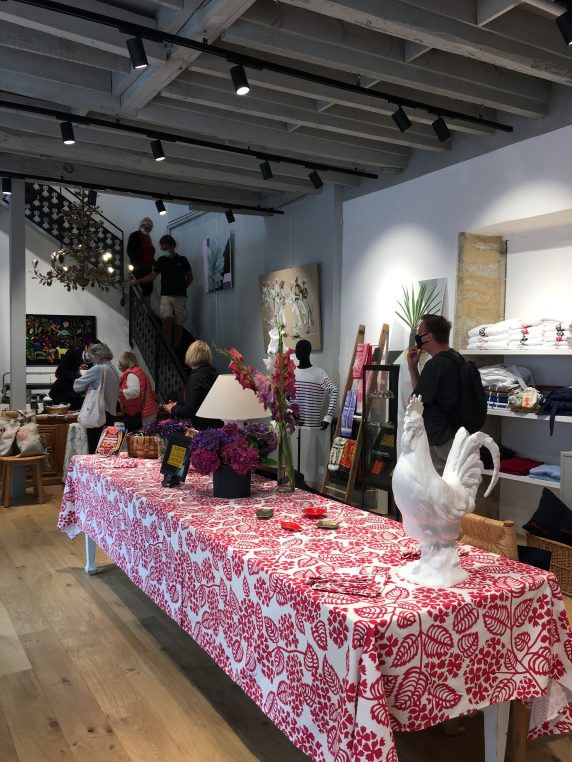 My last stop was in Northern Brittany, in Perros-Guirec, where I was lucky enough to meet Hélène Rodocanachi, who celebrated her 105 th birthday in March, during confinement. She was vacationing in her childhood house, which now belongs to her grand daughter, and where she delivered two of her five children on a September 28 th! They were there with her to testify… 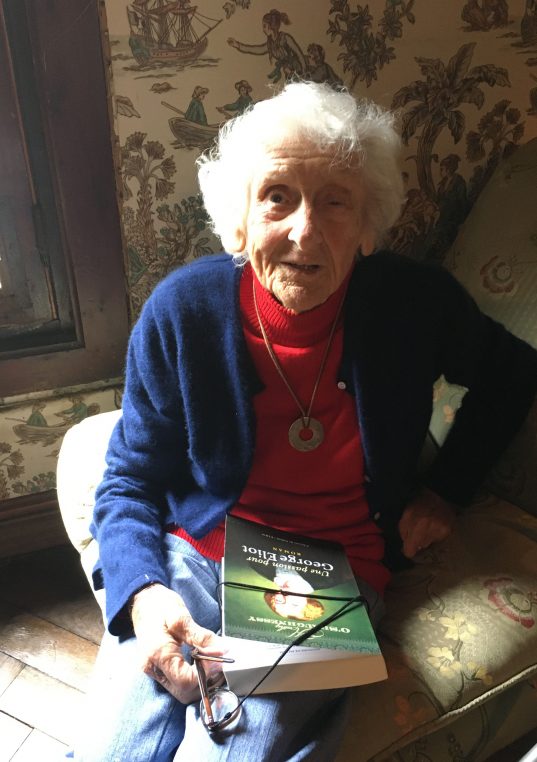 Her son, Olivier de Rohan, a great art protector, took me around the area to see Maurice Denis‘s house, Silencio y Descanso, in Trestignel, where he used to vacation from 1908 to 1943. We also saw the amazing little island of Costaérès which belonged to Nobel Prize winner Henryk Sinkiewicz who wrote “Quo Vadis”. It is mandatory to walk around on the pink granit rock formations which are the main construction material for the area, including the beautiful church of Notre Dame de La Clarté. 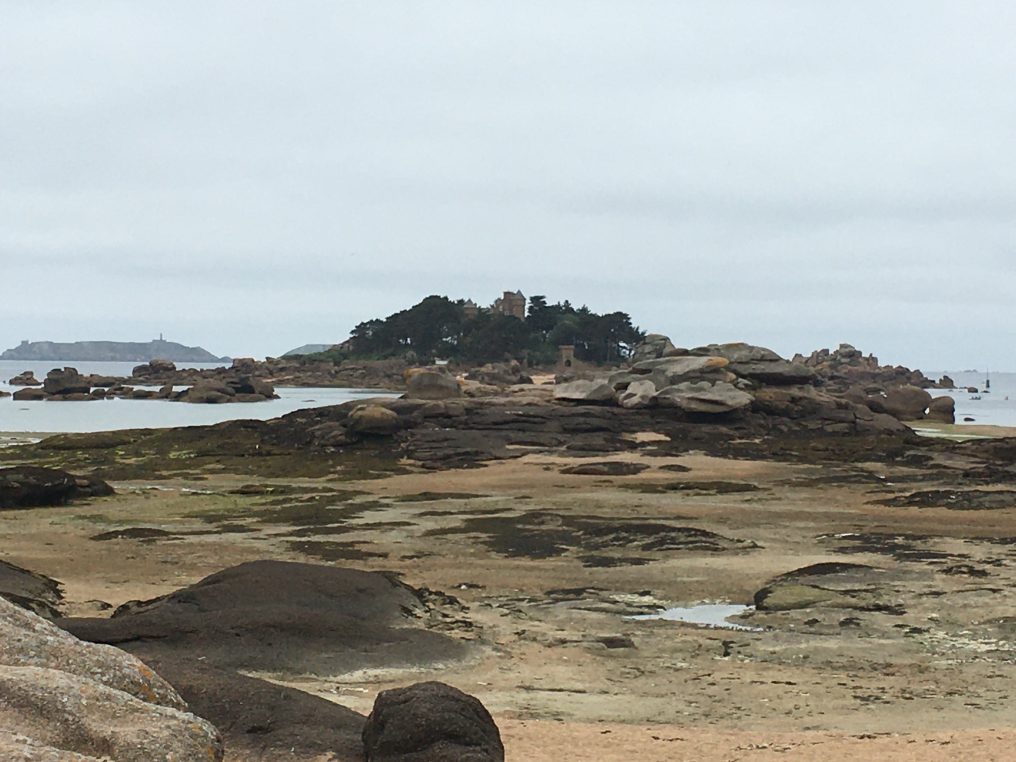 The mysterious island of Costaérès where Sinkiewicz, author of “Quo Vadis” lived in the house built in pink granit

When I left Perros- Guirec, the sun suddenly erupted and I realized how harsh the climate was in this little enclave of Northern Brittany. Hydrangeas of all colors are in my mind forever, and the hard life of fishermen and brodeuses (embroiders) remains. But what a beautiful country! 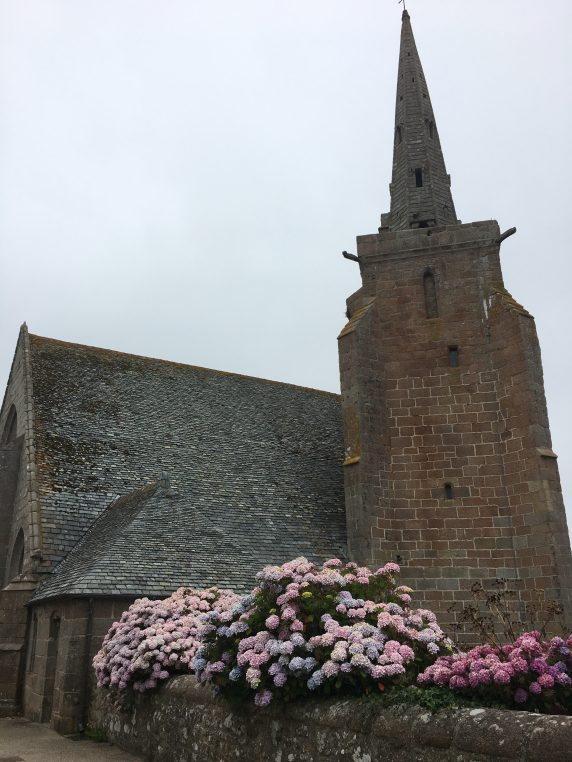 Notre Dame de la Carté in Perros-Guirec was built in pink granit in 1445, with a very original architecture and a Way of the cross by Maurice Denis.

7 Comments on “Wandering around precious Brittany”