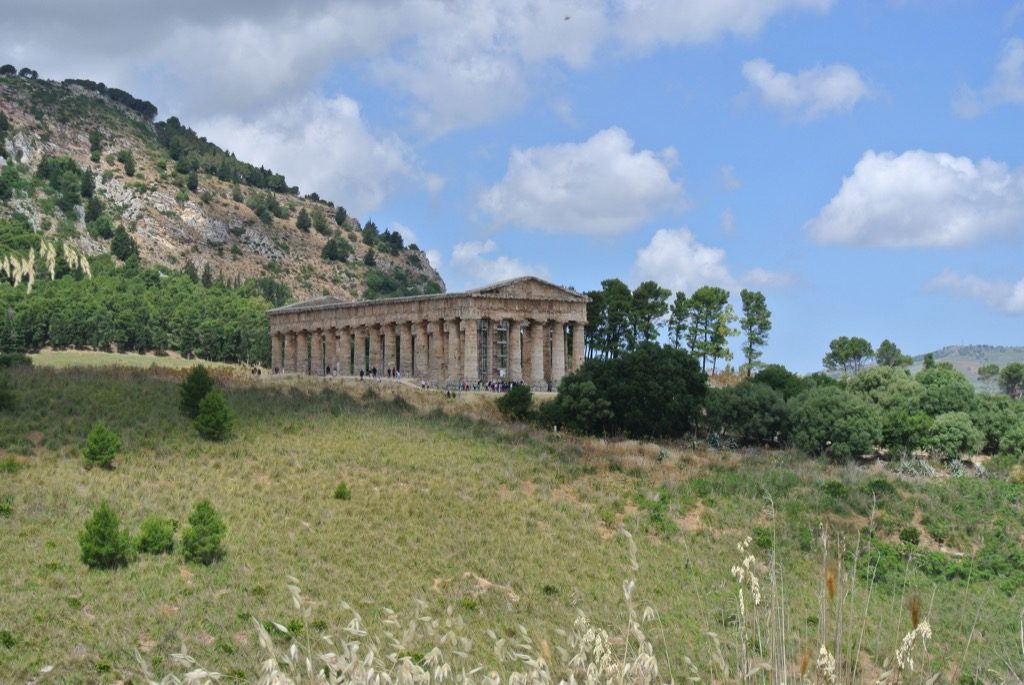 The 5th century bc Temple of Segeste remains very wild and romantic like its arch enemy Selinunte.

In which country in the world can you play two rounds of golf on a Kyle Phillips links course, swim on a listed wild beach, sit in a 5 th century bc Greek amphitheater, listen to « Iphigenie in Tauris » by Euripides with 6 000 young people, and admire (almost) alone a Greek Satyre from 4 th century bc, recently “fished”  between Mazzara del Vallo and Tunisia?

You have guessed! I am just back from Sicily, where from Trapani to Siracusa, I have not stopped being startled by the wild beauty of Segeste and Selinunte, the fantastic food and the kindness of the people.Discovering the Road of cheeses and the restaurant “del Viale”, with the best pasta with ricotta and fresh ,in the charming village of Palazzo Adriano where « Cinema Paradisio » was shot and the fantastic sites of Caltabellotta and Prizzi both built to fight the Sarrasins, 1 000 meter high in the mountains, was only rivaled by the  village scenes where local people fought to explain how « the key to the church would only appear in two hours and we had to wait… » and then suddenly there it was… beans or how Albanians built the town in the 15 th century and the main church there, is greek orthodox. 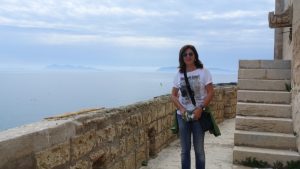 Life in this part of the world is a permanent drama that always turns into “com media dell’arte”. Can we find a boat to take us in Trapani to the « Colombaia », a Carthagine fort which was especially opened on Sunday for a Colombaia day by Rita Platamone Barraco,  who spent the last five years finding means to restore it and managed to have a special post stamp issued the day before.  As a representant ant of FAI (the Italian equivalent of the National Trust) in Trapani, she created “Salviamo la Colombaia” (save the Colombaia) which anyone can contribute to. The result is very dramatic, with over two thousand years of Greek, African, Spanish invasions  filling our imaginative minds. The fort was added on over the centuries,  until it became a prison and finally closed  down fifty years ago… No boat problem anymore when, suddenly the whole yacht club, was ready to drive us with much smiles and laughs. 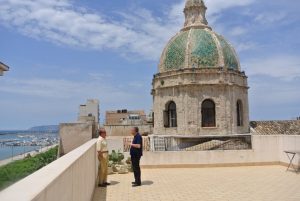 The « granite di limone » is waiting for us a few blocks away as is the freshly fished tuna which can only be eaten in May and June… in front of the church of Purgatory, where papier maché lifesize apostles wait all year round to be taken out for the Easter week procession.

There are little miracles waiting for you at every corner of the Southern coast,  including Verdura, a beautiful links golf course where I recommend playing the back nine of the East course and the front nine of the West course (try to negotiate) and try the “Pizzeria” one of the five restaurants developed by chef Fulvio Pierangelini. The day I arrived, I had a fabulous meal there with scalopine de vitello with marsala wine and arancini, a sort of croquette with mozzarella and rice. But the next time I tried to book, non residents were not allowed… The 210 room resort is overly pretentious, but it’s worth trying ! 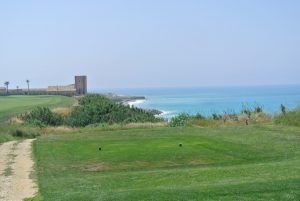 In Ortygia, we missed the Palazzo Benaventano and his charming owner Piero, but we did have breakfast by chance with Gioacchino Lanza Tomasi, who runs the theater festival in Siracusa and is the heir to the writer of « The Leopard »,  Giuseppe Tomasi de Lampedusa and a very famous music and drama expert.  His wife, Nicoletta, is an energetic Palermo lady and runs a cooking school in Palermo called « cooking with the duchess »! 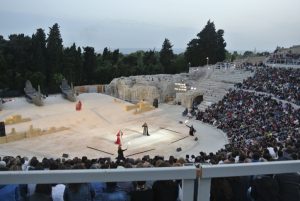 Seeing Iphigenia in the Teatro Greco was a unique experience

They were happy with the season which has seen the theater filled every night with over 6 000 spectators, mostly young students,  who also came for Medea! A profitable festival for once!

Walking at night past the  duomo built on an old Greek temple with huge columns,  and  surrounded by the purest baroque architecture after the tourists have gone, was one of the highlights of the week. As was the discovery of the charming town of Scicli, away from the main road of Noto and Ragusa where our friend Aude bought a house with three baroque churches just outside her windows. 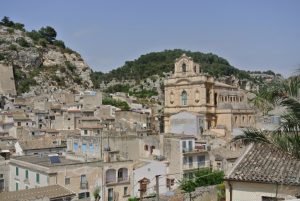 The Caffe Busacca is the meeting place for coffee and ice creams as are, all around Sicily,  the numerous Piazza  Garibaldi named after the Italian hero who ” liberated” Sicily….

At Villa Romana del Casale, near Enna,  the 3 500 square meter Roman villa entirely paved in mosaics, the most surprising rooms are not the famous ladies dressed in bikinis (women were incredibly sporty already in the 3 rd century ad) but the hunting rooms with wild animals and the children racing in the circus with flamingos and giant ducks pulling their carts. 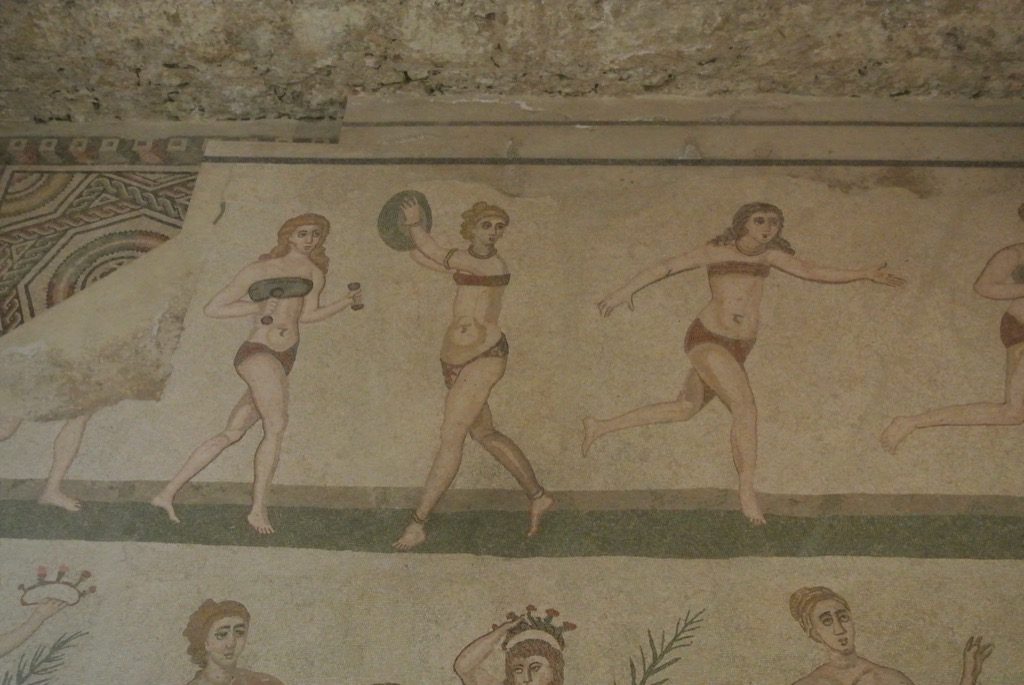 Surprising, the “bikini” ladies, show how sporty women were at the time! 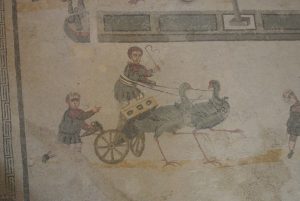 Colours are mostly beige and green with olive trees and dry mountains just outside Burgio, a famous pottery village which developed a beige and green special glaze, in the mountains near  the thermal town of Sciacca (which is mentioned in the Leopard) and they are turquoise and blue on the beach of Siculiana where we had the best spaghettis with urchins at the Scogliera restaurant while watching the sun dive into the sea. 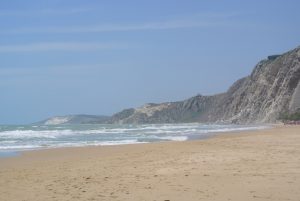 Watching the sun on the beach in Siculiana

But the best kept secret was the house we stayed at, in Borgo Bonsignore, a little village built by Mussolini in the nineteen thirties, just on the edge of a 3 mile long, pine tree lined beach. Orange trees compete with lemon and grapefruit trees, and birds are our only companions, making their nests in the palm trees that survived  the current disease. 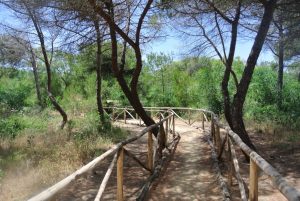 The path to the wild beach at Borgo Bonsignore

The crowds of Baroque Sicily seem very far away and after having emptied the cellars of Planeta and Tasca vineyards nearby, and tried the hundred varieties of pasta a la sarda (sardines) and other eggplant dishes, desserts of ricotta and wild  strawberries from Ribera by the kilo, we are ready to retire to heaven. 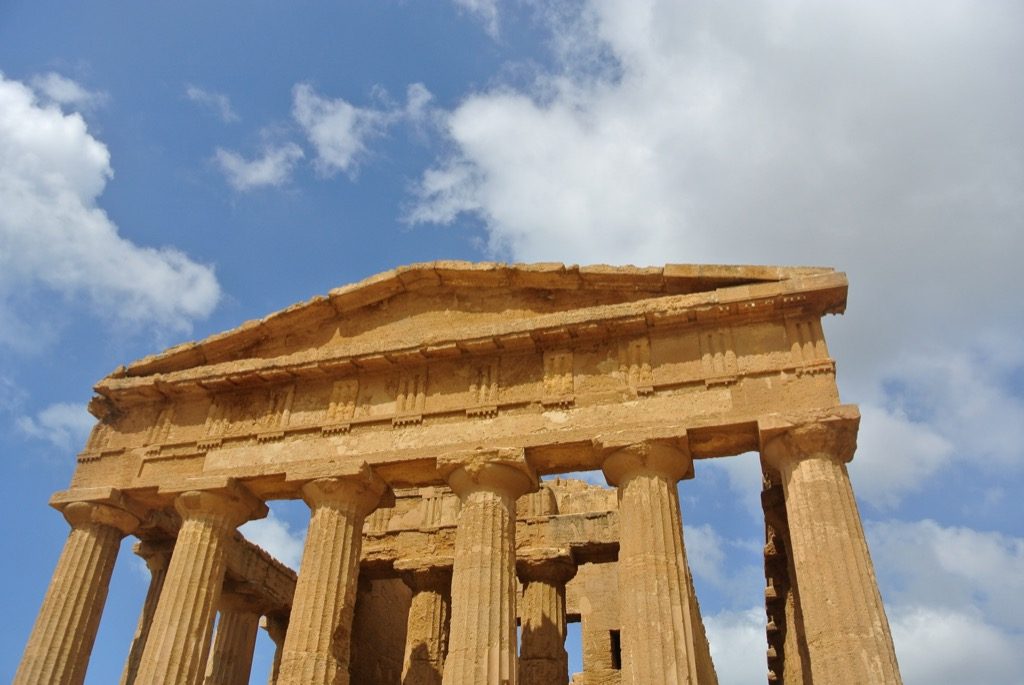 And in Agrigente you are among Gods!

Where on earth do you find such a variety of pleasures?