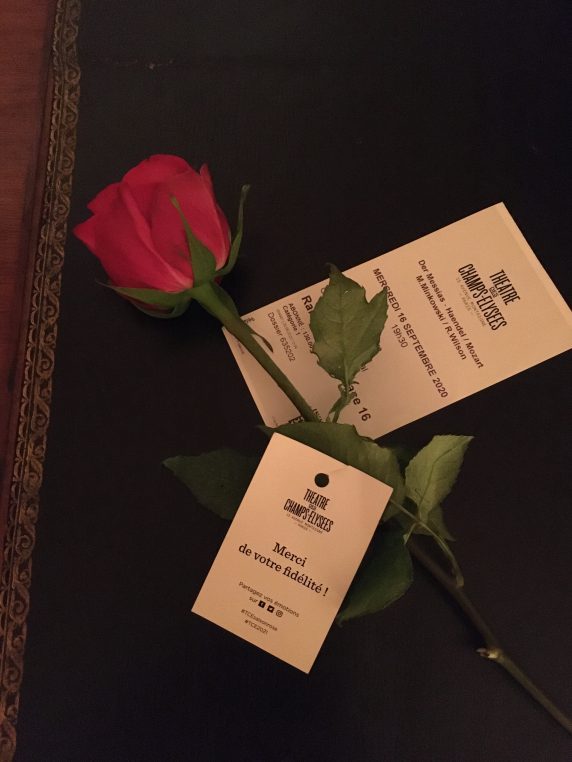 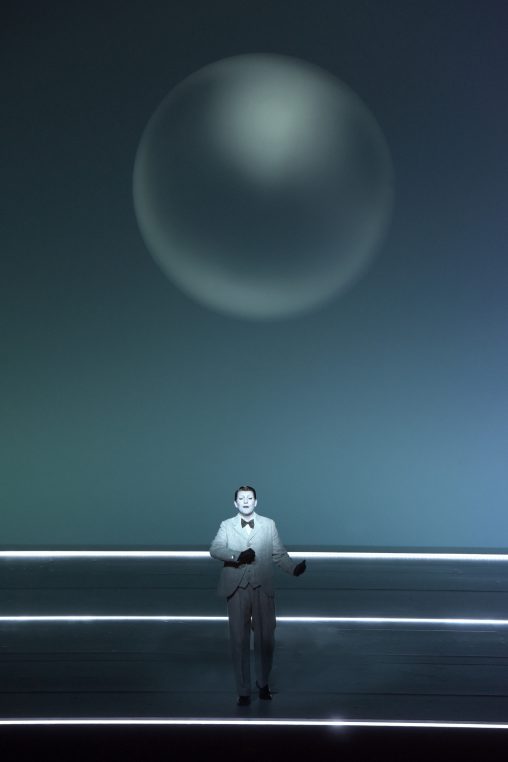 The first live music performance took place on the 16 th at Théâtre des Champs Elysées with Bob Wilson’s “Der Messias” which I was expecting not to like. Well I was wrong, the show is so beautiful visually and musically that it was a revelation for the public. Michel Franck, the director of the theatre, spoke in a warm and intimate way at the beginning, saying how happy and relieved his teams were to have been able to produce these three evenings of Der Messias, created last January in Salzburg. Everyone was concentrated and happy to be sitting in an opera house again. The oratorio in three parts composed by Mozart after Haendel’s Messiah, was considerably enlivened by a funny, handsome and exciting set of characters, singers, dancer and actor. The original libretto in English by Charles Jennens was sung in German in an 18 th century  translation by Christoph Daniel Ebeling. 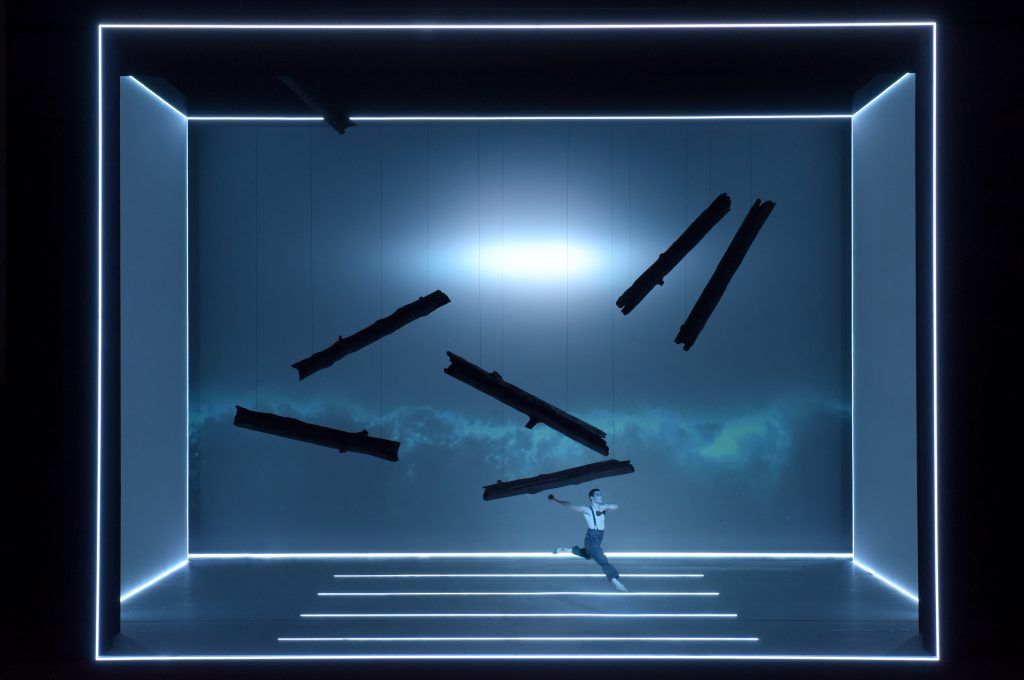 I was stunned at the beginning by the stage presence of French 36 year old tenor Stanislas de Barbeyrac who is dressed in a beige tweed 1930’s suit. He is such a good actor that Bob Wilson had no problem making him dance and act on stage… His voice is charming and solid. His colleague, Bolivian bass José Coca Loza, was just as stunning with a beautiful voice. He had sung the part in Salzburg last January and will be again in Geneva. 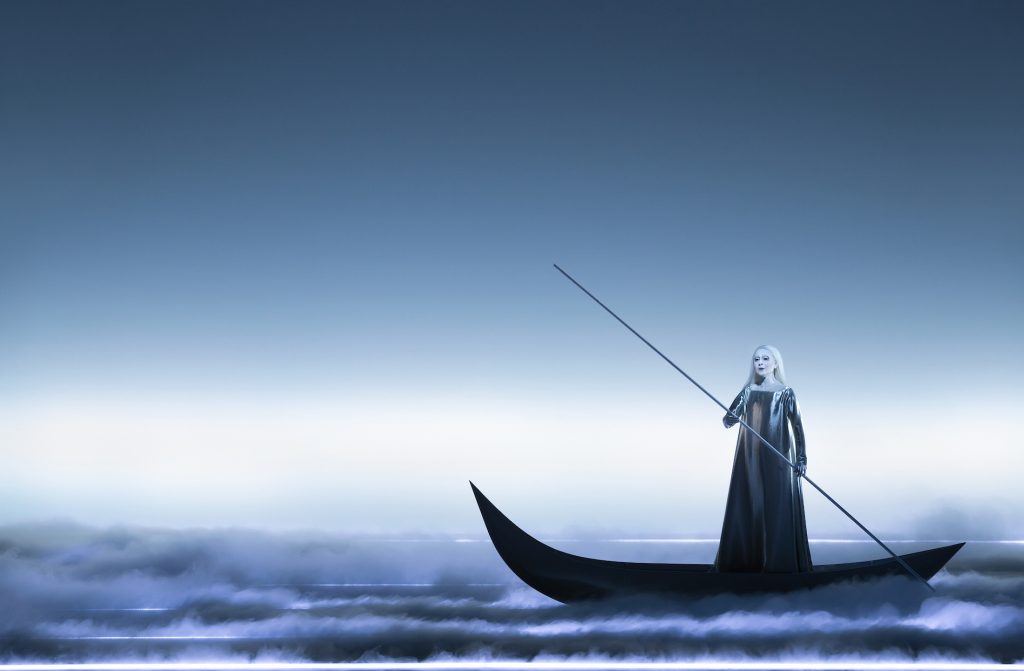 Elena Tsallagova, the Russian soprano who was trained at Atelier Lyrique of the Paris Opera in 2006, was a delightful angel and appeared in different white and silver dresses designed by Carlos Soto. The decors were made primarily with exceptional lighting and videos by the young Polish cinematographer Tomasz Jeziorski, some of which were very reminiscent of Hiroshi Sugimoto’s photographs. One scene especially of Fonsakis dancing on the Alleluja with large waves in the background is unforgettable. 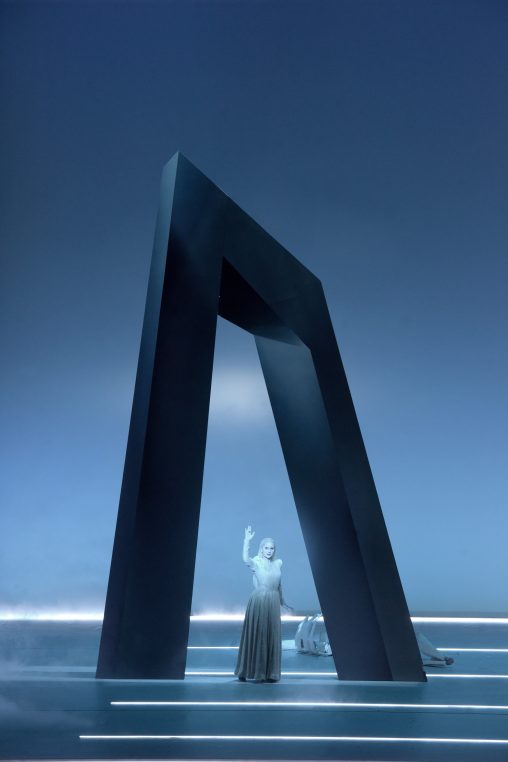 White lights, greys, blues, silver and of course black outfits for the chorus make for a constant visual delight. I had often been disappointed by Bob Wilson’s latest productions, but he has now come back in full splendor. He was present at the end, happily bowing to the huge and long applause of the public and everyone was so happy to see him in France. I wonder how he was able to come? Or maybe he stayed in Europe since Salzburg last January?  And the visual effect of the chorus à contre jour with their black silhouettes was fantastic.

Mezzo soprano Helena Rasker with Stanislas de Barbeyrac, © Vincent Pontet – TCEAnd when we left the theatre, we were all handed a red rose with a thank you note. What elegance!

Now that the Paris Opera is closed until November, the TCE reigns alone with the refinement of a 100 year old lady who has kept the manners of the past. What a relief. Le Ballet Royal de la Nuit is in October and Salome will be next in November. It is time to book.

3 Comments on “With “Der Messias”, Bob Wilson is back at his best”