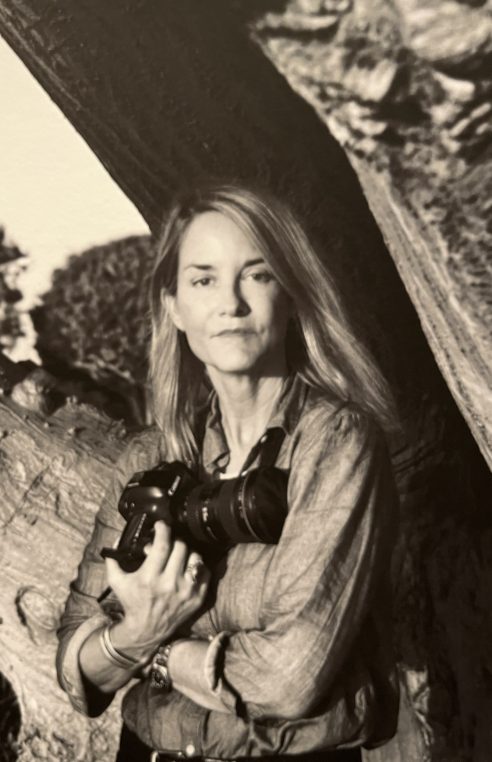 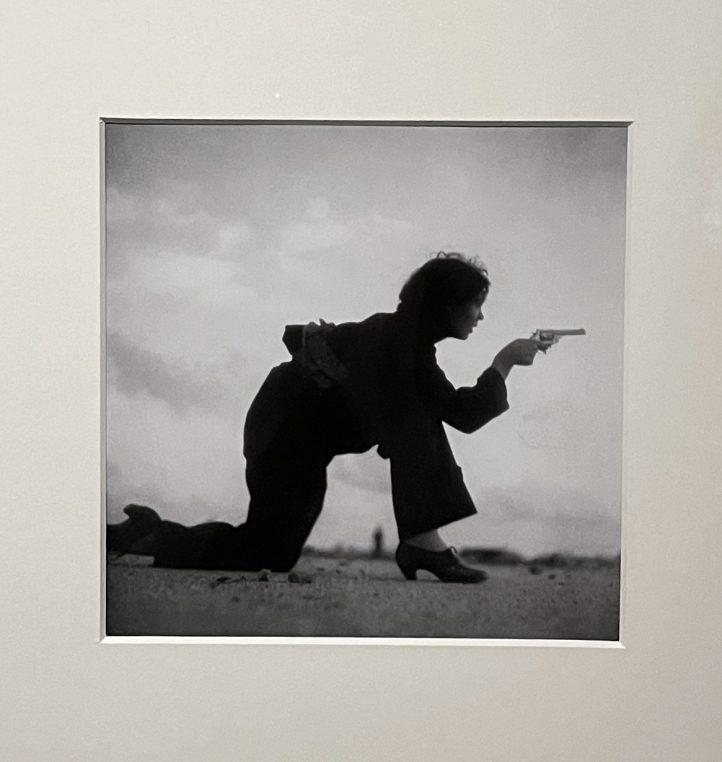 Gerda Taro, A Republican militiawoman training on the beach outside Barcelona, Spain August 1936

At a time when we constantly hear and see women reporters at war, you might be interested by the new exhibition “Women War Photographers” at Musée de La Libération de Paris, place Denfert-Rochereau, and realize that women were already active with their cameras in the 1930’s. Starting with Gerda Taro, a German Jew, who died at 27 in Spain while covering the civil war with her companion Robert Capa, Lee Miller in post war Germany, Catherine Leroy in Vietnam, … eight photographers were selected by the team of Felicity Korn at Kunstpalast Düsseldorf and Anne Marie Beckmann from the Deutsche Börse Photography Foundation in Frankfurt where the exhibition was first shown. The question is: do women photograph war differently than men? 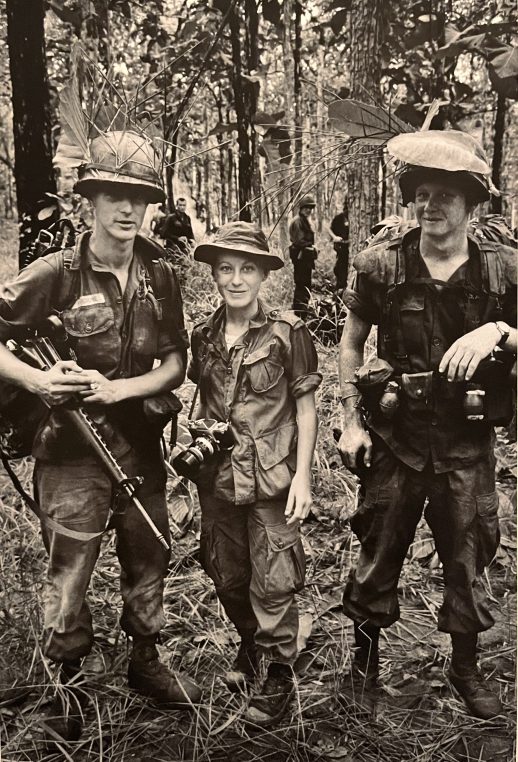 And the answer is that they probably have easier access to some parts of the war, like women and children. The fascinating tiny Catherine Leroy, trained for a parachute license when she was 18 in order to impress her boyfriend. She subsequently joined the American soldiers in 1966 in Vietnam with AP, and this technique was very useful.  She was the first woman to be awarded the Robert Capa gold medal in 1976. She covered the war in Beyrouth in 1975 and again in 1982, and photographed the fall of Saigon with Françoise Demulder (who also features in the show), in 1970. She went on to photograph “Woodstock” and went on a road trip with Vietnam veterans for a year. She died very young from lung cancer. 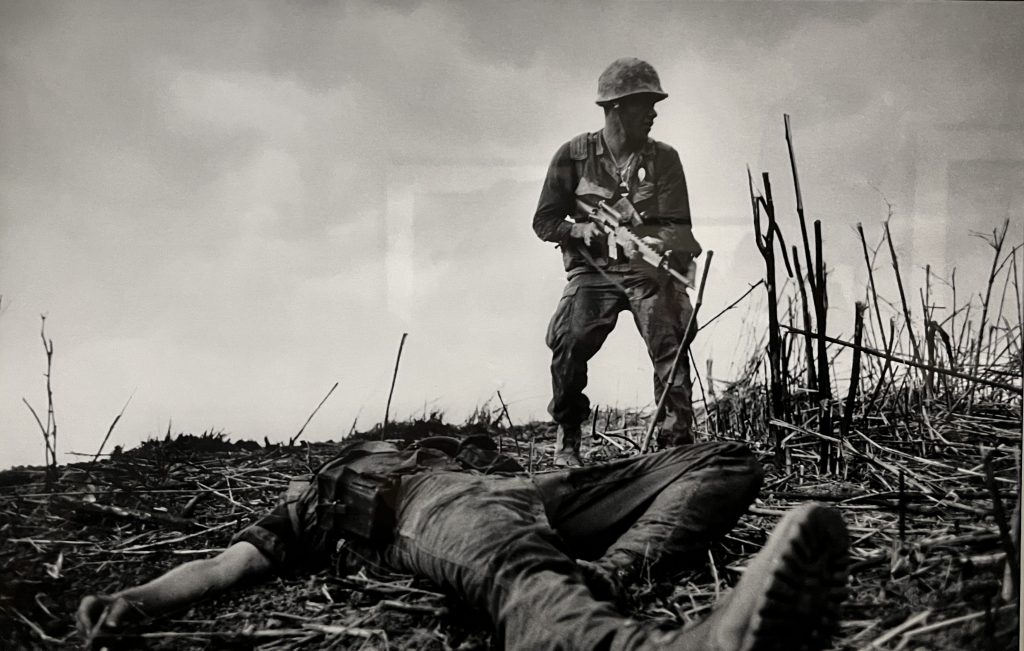 Lee Miller (1907-1977) is the most famous of them all. First a model, then the Muse of Man Ray, she later worked as a Vogue photographer and took pictures all over Europe in 1944 and 1945. She has a few very strong pictures in the show, one of Germans disguised as civilians who tried to escape the camps and one of the legs of a Buchenwald deportee in a striped pyjama and socks. She shot the fascist ex-Prime Minister of Hungary, Lászlo Bárdossy, facing the firing squad and two German women sitting on a bench in Köln surrounded by buildings in ruin. 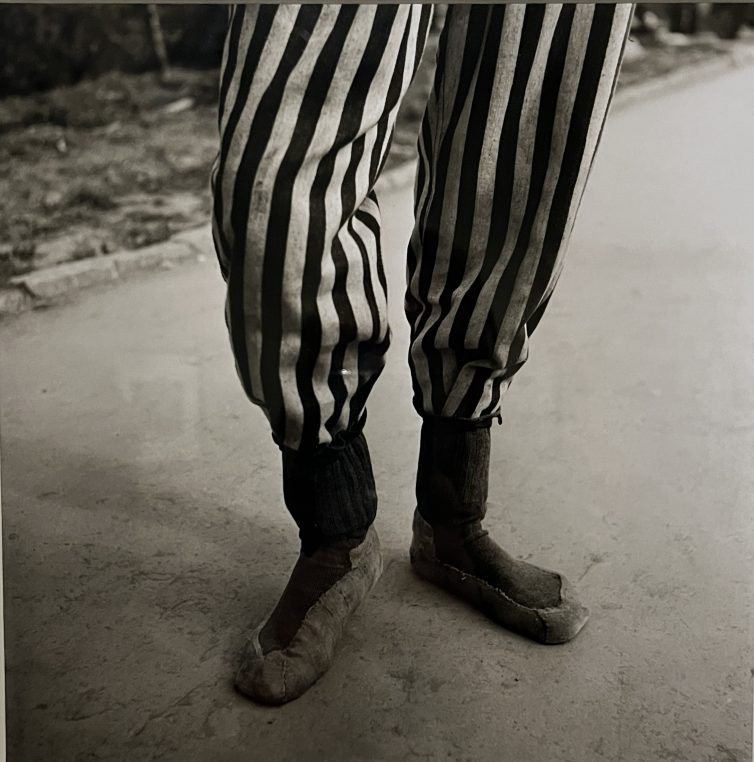 Christine Spengler, a French photo reporter covers Tchad, Cambodia and Norther Ireland. One of her pictures “Falls Road”  could be in “Belfast” the recent film where Kenneth Branagh traces back his childhood. Another remarkable picture is the Qom cemetery, in Iran,  in 1979. Two women with they chador floating walk among a forest of sticks which mark the tombs. Another one of children playing with shell casings in the waters of the Mekong in Cambodia in 1974 are both charming and terrifying. 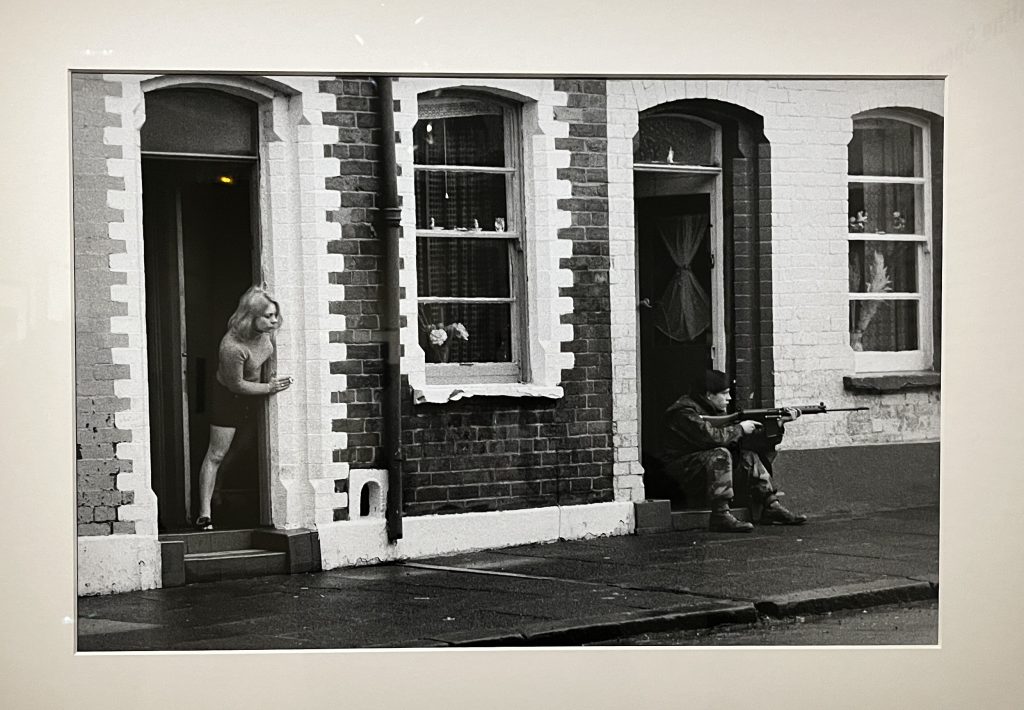 Susan Meiselas (b.1948) is the only one to shoot in color. In Nicaragua, she is able to approach the guerrilla fighters against the Somoza regime and she covers the civil war in Salvador.  She lives in New York. Pulitzer Prize winner Carolyn Cole was in Bethlehem in 2002 in the Church of the Nativity and she worked mostly in  Afghanistan, Irak and Liberia like her colleague Anja Niedringhaus (1965-2014) who was shot during the presidential elections in Afghanistan.

The exhibition is a great surprise in the intimate Musée de la Libération de Paris which features interesting moments of August 1944. The theme of war photographer is so actual that we relate fully to these eight women who, for most of them, died young. Until 31 December 2022. 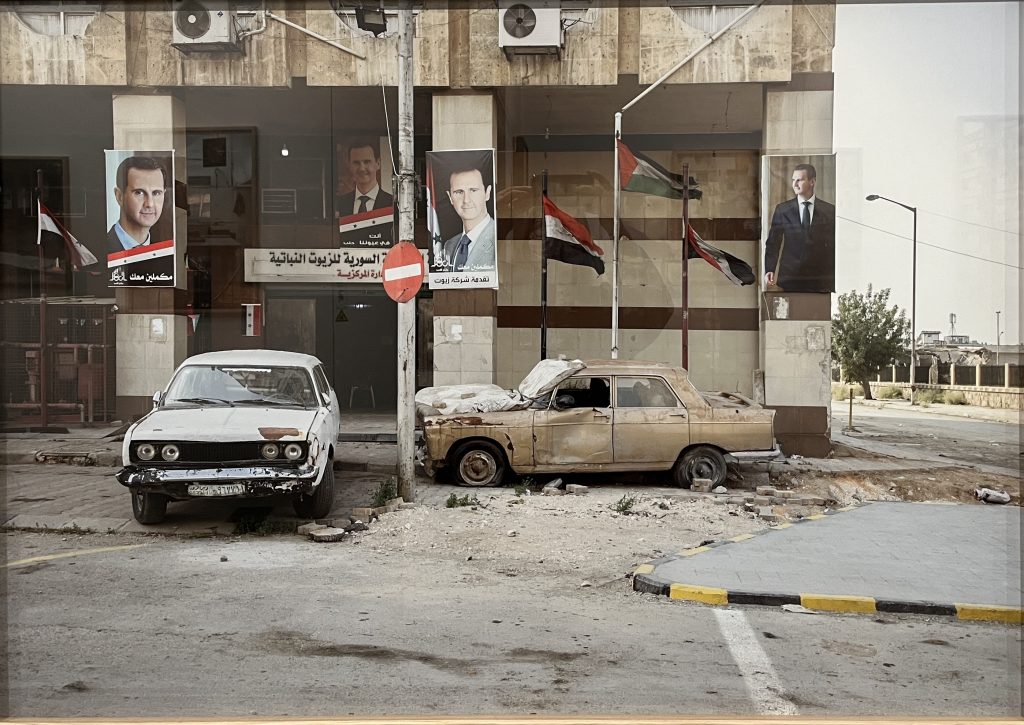 Fondation Henri Cartier-Bresson is undergoing a large extension on rue des Archives and at the moment only one gallery is open with, Mathieu Pernot,  the laureate of HCB Prize 2019, sponsored by Fondation d’Entreprise Hermès. His pictures of the ruins of Beyrouth after the 2020 explosion and his photographs of Mossoul and Alep last year, are very strong. (Until June 19, Fondation HCB, 79 rue des Archives).