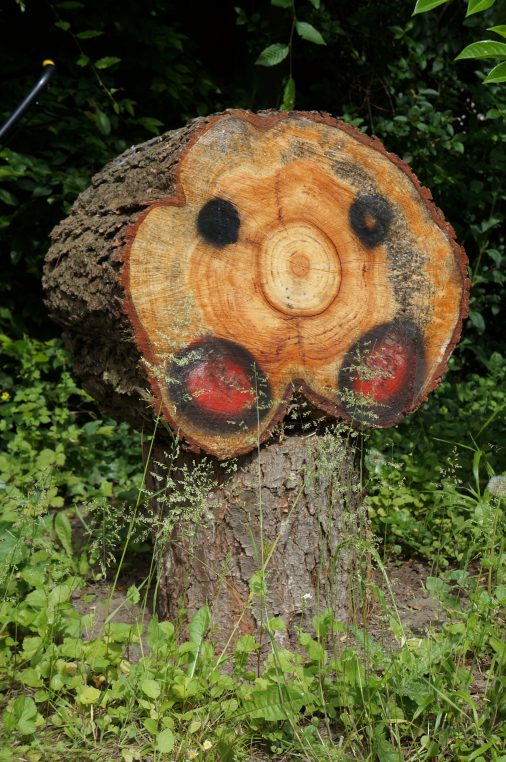 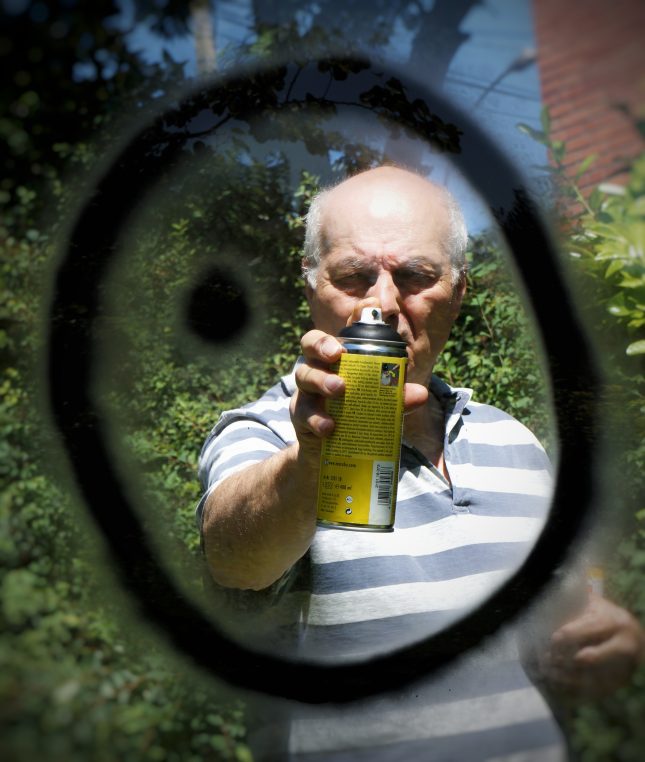 Gérard Zlotykamien (Zloty), became the first graffiti artist in the world, when he traced his  “Ephémères” in Great Britain in 1963. Today at 79, he is painting an empty wall in a children’s park, at 44 rue du Dessous des Berges, in the 13 th arrondissement. It is a joyful fresco painted in acrylic, which perfectly matches the playground beneath it. This conjunction of space and talent is due to Mathilde and Gautier Jourdain, from Mathgoth gallery who only represent street artists and are showing 55 years of his work at the gallery. This is their tenth large project in the 13 th arrondissement and their 45 th in France.

When he was 15, Zloty, the grandson of Jewish Polish emigrants, spent all his time roaming the galleries of rue de Seine. He never went to art school and always worked on the street, later having a day job at Galeries Lafayette to survive. His first actions were in les Halles, in Paris, which were being torn down. He now lives in La Rochelle, and keeps painting outside onto streets. He loves its classical architecture and gentle climate. When asked if he does not mind having to make new friends at 79? he responds: “I did not know you ten minutes ago and here we are talking…” 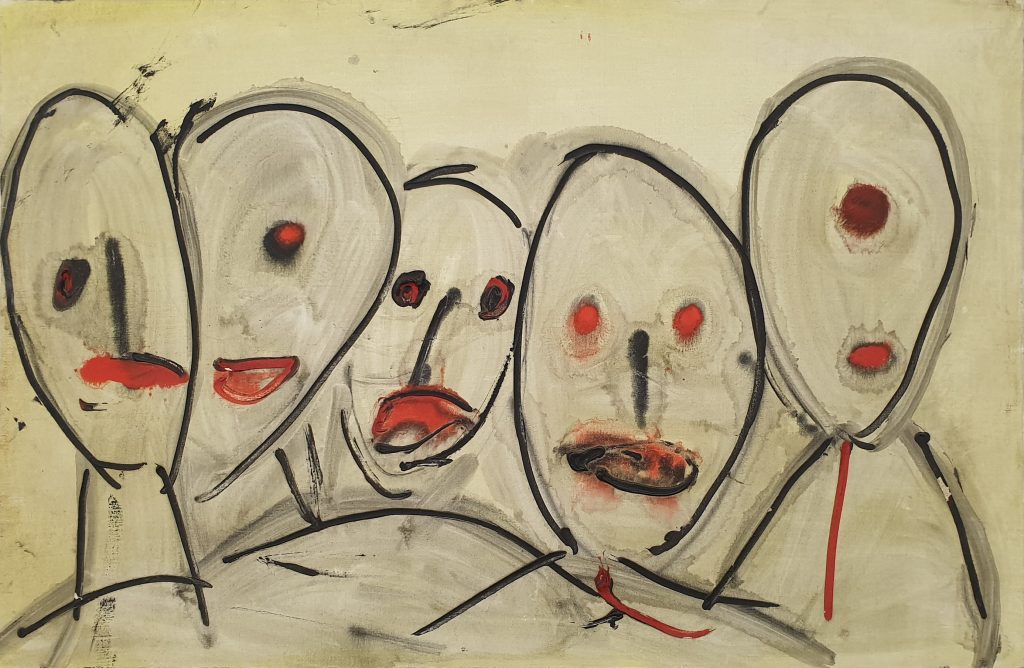 An exhibition at Galerie Mathgoth includes some wonderful early works which he rediscovered two years ago when moving out of Paris. The oldest “Ephémères” painted in 1958 reminded me of a Fautrier. A more recent acrylic on felt painted in 2012, hangs next to works from 1968 and across from an aerosol on linen cloth. All are called “Ephémères”. He has been arrested and fined by the police many times for illegal degradation but always released. And has kept his kindness and joyful face all along.

Zloty has a twinkle in his eye when he talks about his new project for the children’s park. He loves and cultivates the naiveté of young people. He has only one regret, not having met Alexander Iolas when he had a gallery in Paris. He missed their appointment set up by a common artist friend and the famous Greek American gallerist moved out. 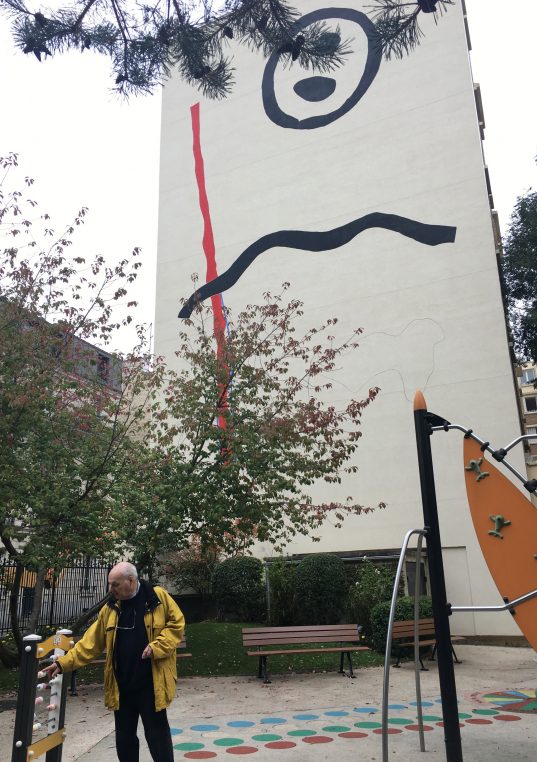 The charm and genuine sweetness that come out of Zloty when you speak to him are enchanting. His only passion (besides his wife) is art and he has no desire of establishing an identity like most street artists. His phantom-like figures were first drawn with aerosol, most often at night, and were immediately called “Ephémères”. They refer to all victims of war (Hiroshima), tsunami, terrorism,  including the tragedy of his grandparents, who were deported. He likes to paint on transient objects found on the streets, like suitcases or doors, which are being thrown away. ` 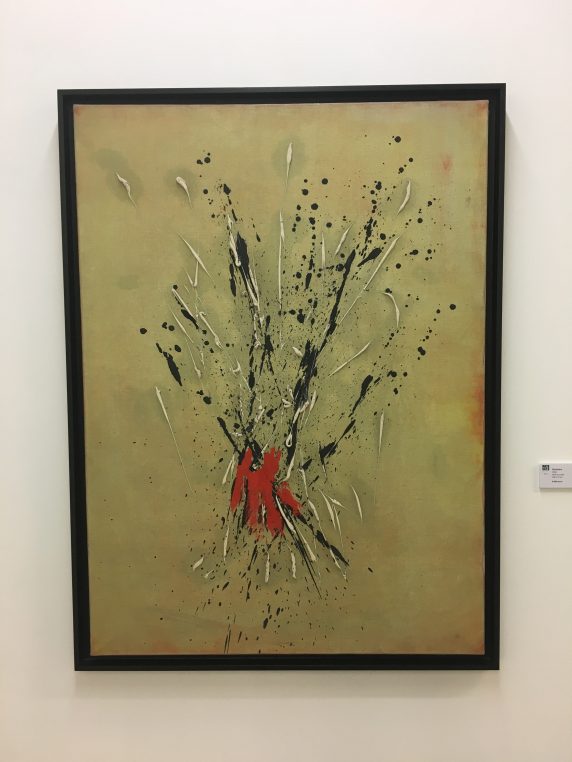 He is the first street artist to have been awarded, in 2015,  the order of Arts and Letters by Fleur Pellerin, then Minister of culture.

The fresco was realized in the 13 th arrondissement, thanks to the will of socialist mayor Jérome Coumet,  a keen contemporary art lover, who wishes to decorate empty walls in this popular area. A hundred local inhabitants voted their favorite project out of three propositions. It was realized, by the artist himself, on a building owned by Paris Habitat, which manages social lodgings. Its specific aim is to transform the “projects” into happy places to live in. Zloty participates perfectly.

Exhibition at Mathgoth until November 9,  34 rue Hélène Brion, 13. (near the Bibliothèque Nationale)