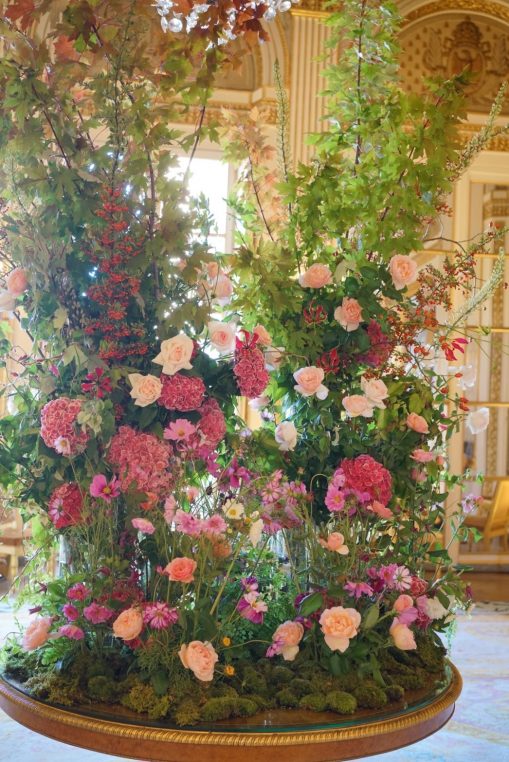 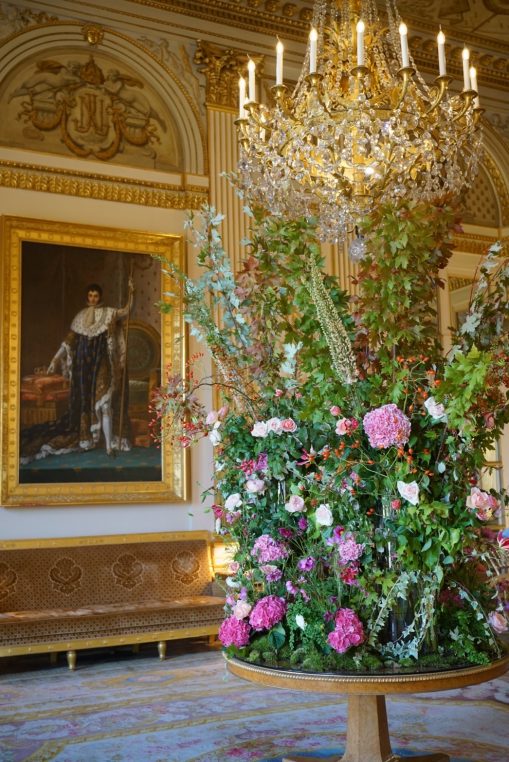 The annual Gala dinner of the Friends of Chantilly celebrated the Duc d’Aumale’s two hundredth anniversary at the Palais Royal, in Paris, where he was born on January 16, 1822. Built by Richelieu in 1628, it was Anne d’Autriche’s and the young Louis XIV th residence in the 17 th century. It then became the palace of the Orléans family. Today the gilt salons are part of the ministry of Culture and the occasion was especially chic, with Prince Amyn Aga Khan giving a charming speech on Musée Condé’s new acquisitions. The day before, the Friends had been shown the very exceptional “Très Riches Heures du Duc de Berry” (probably the most famous manuscript in the world) by the curator of Chantilly’s library Marie-Pierre Dion. 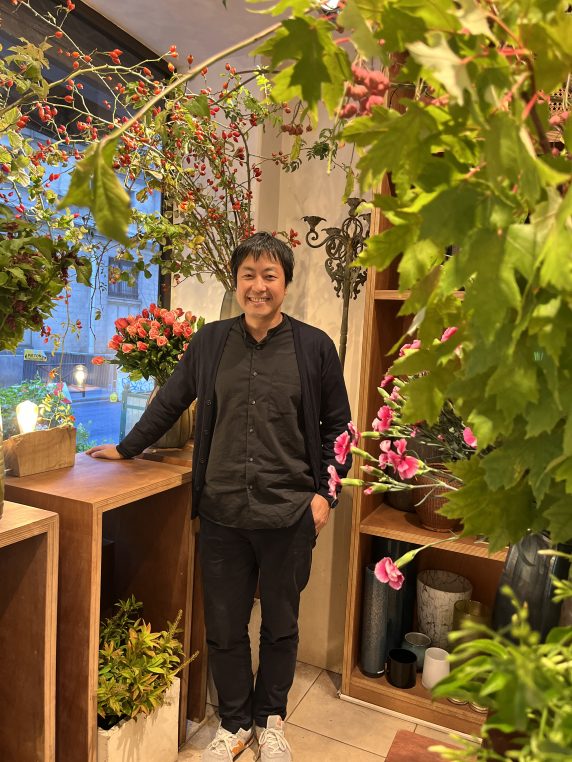 But the great surprise of the evening was the fabulous flower decor made by Estelle Perrone with the team of Jardin du I llony. The Roman born artist, who studied at St Martin’s School in London, met her next door neighbor Japanese flower genius, Atsushi Taniguchi six years ago. And she hired him for a party in Fontainebleau on the theme of the Forest for which she had done the drawings. They started working together and she now admitss “He taught me everything I know about flowers”.

Atsushi Taniguchi is a master in Japan where he has two shops, one in Tokyo and one in Kobe. He tours the country, once or twice a year, giving classes in flower arrangements and manages to travel back and forth from Paris once a month. During confinement he used to go near Fontainebleau, to Château de Courances which he loves, and would create flower arrangements in the park. This is how he met Anne Marie de Ganay one of the owners, who became a close friend and introduced him to her world of friends. 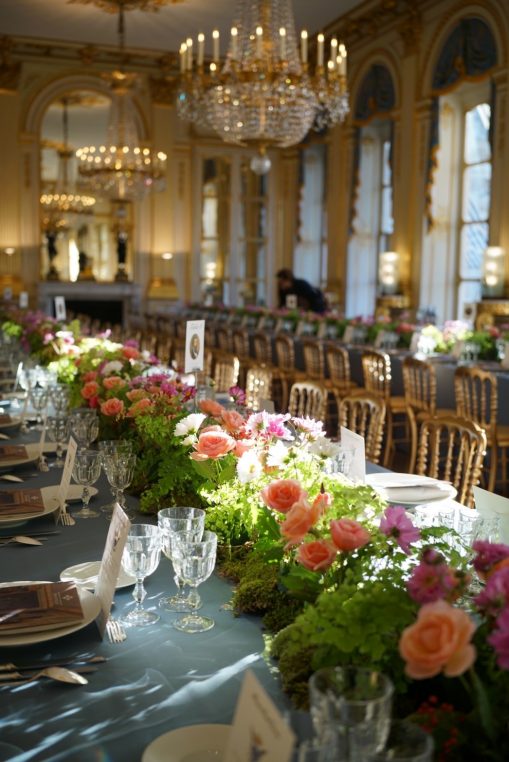 At the Palais Royal, Estelle Perrone made one hundred little bouquets for the two long tables for fifty guests, who each left the party with one of them.

With Sachie Onodera, Estelle created a huge bouquet for Salon Jérome Bonaparte, a square room overlooking the gardens of Palais Royal. When you walked into the room, which is richly gilt, this is only thing you saw and the guests were mesmerized. A charming vase of pink roses stood in the Pierre Alechinsky room, commissioned by Jacques Lang years ago. In the dining room where two fifty guests tables were laid out, a hundred little bouquets were lined in the center. The visual effect was fantastic. 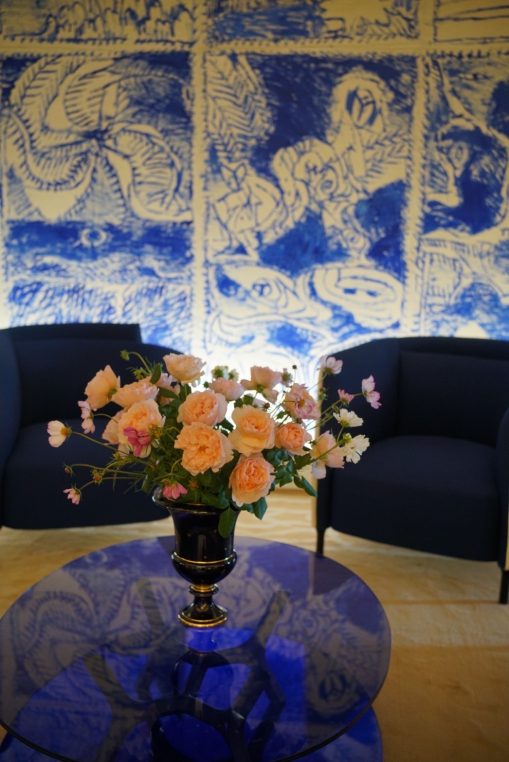 In the hallway of the ministry of Culture, a perfect simple rose bouquet welcomed the guests in front of the amazing Pierre Alechinsky decor

All the flowers are ordered in Rungis and the team works in a very harmonious way. Estelle has her own projects for shop decorations and often works with Sachie Onodera, the shop manager. I went to order a bunch of flowers for a friend who is sick and the tiny boutique had two compositions in pale pink and darker purples which were both perfect. The great talent of Master Taniguchi is to mix aerial flowers, with scented roses or larger species and dahlias in great vases. 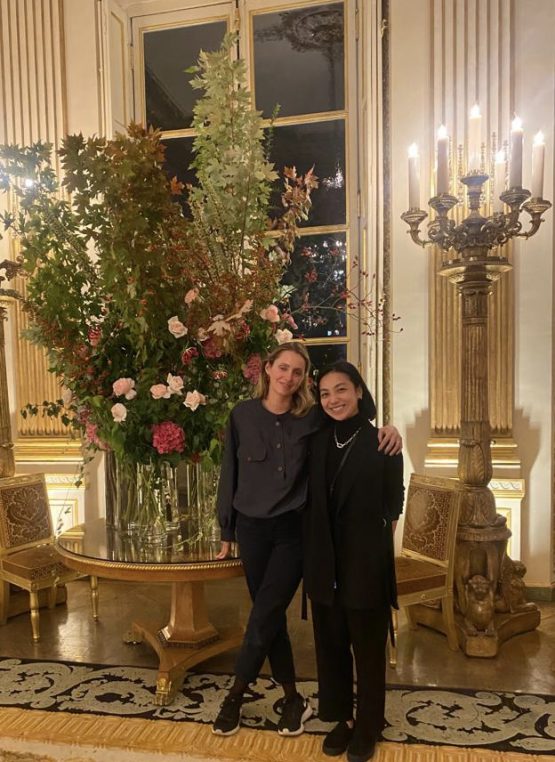 Don’t hesitate to visit the little shop on 3 rue Mesnil (near place Victor Hugo), the atmosphere is very Japanese and quiet. Bouquets start at 50€. And you will receive a great welcome. You can join Friends of the Domaine de Chantilly and receive all the perks which come with membership, like special visits and regular videos with Matthieu Deldicque, the new director of the museum.