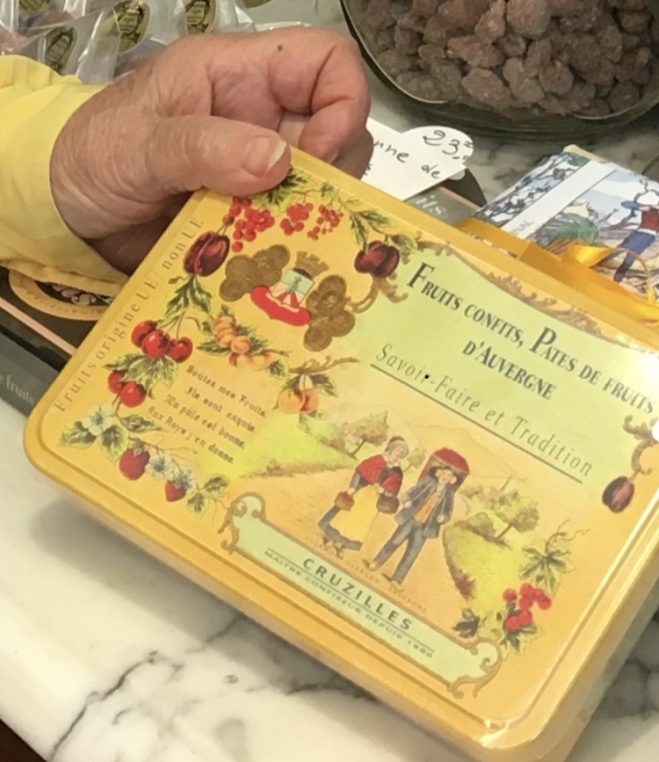 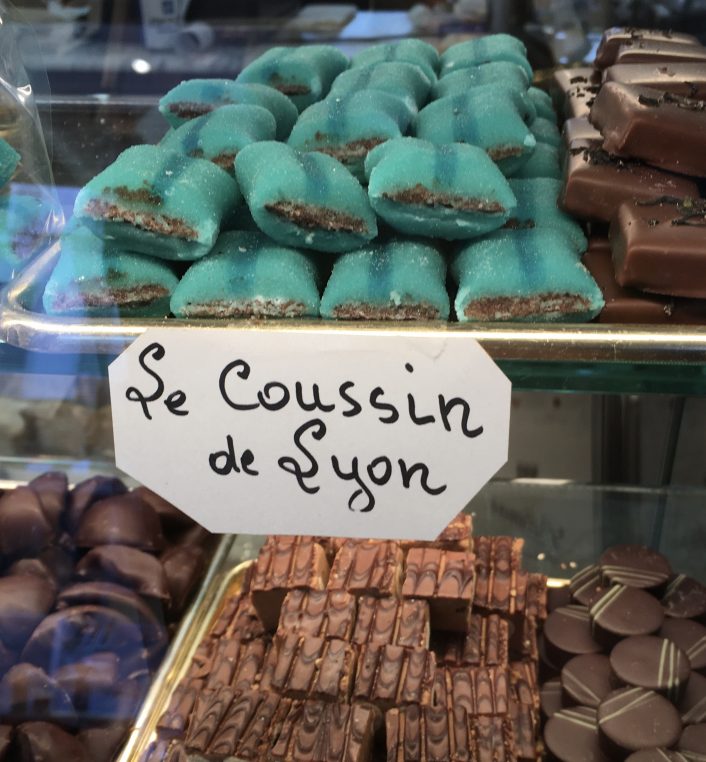 Meryl Streep, when she is in her flat in Montmartre, comes down to buy the Coussin de Lyon, a chocolate ganache with almond paste made by Voisin

Denise Acabo has been running “A l’Etoile d’Or”, the most exquisite chocolate shop for almost fifty years, on rue Pierre Fontaine, in the trendy 9 th arrondissement. With her long blond braids, she looks more like Bécassine than like a business woman and it is very charming. She is proud of her Italian ancestors, and mostly of the diversity of French sweets and chocolates that she sells, and for all she has explanations as to the health benefits you can get from them. To visit her shop is like having a pure moment of nostalgia and her products are delicious. 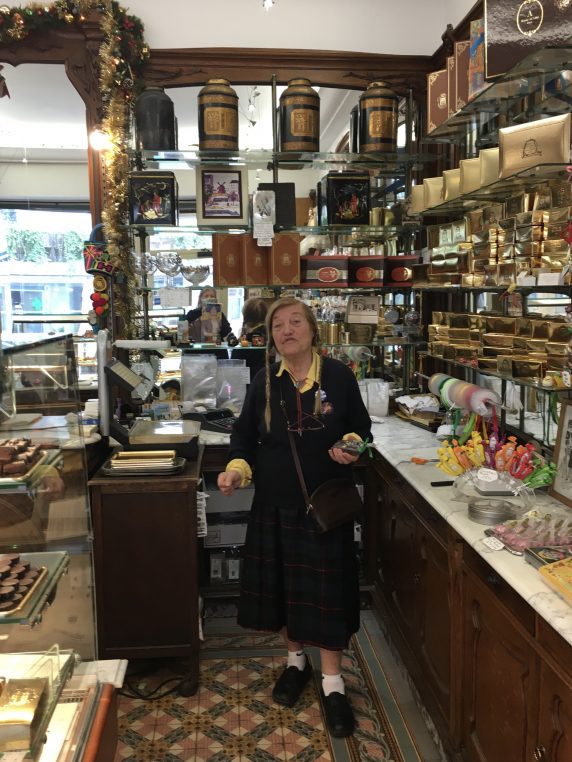 Denise Acabo has been running this confiserie for almost 50 years

I stepped into the shop to ask her what Angélique de Niort was good for, after a dear friend had given me sugared sticks of angélique. So she told me that this root imported from Scandinavia in the XII th century grows in the shade of poplar trees. It supposedly helped cure the great plague of the XIV th century. She includes angélique in chocolate sticks like orangette or ginger and they are good to have at night because less acid. 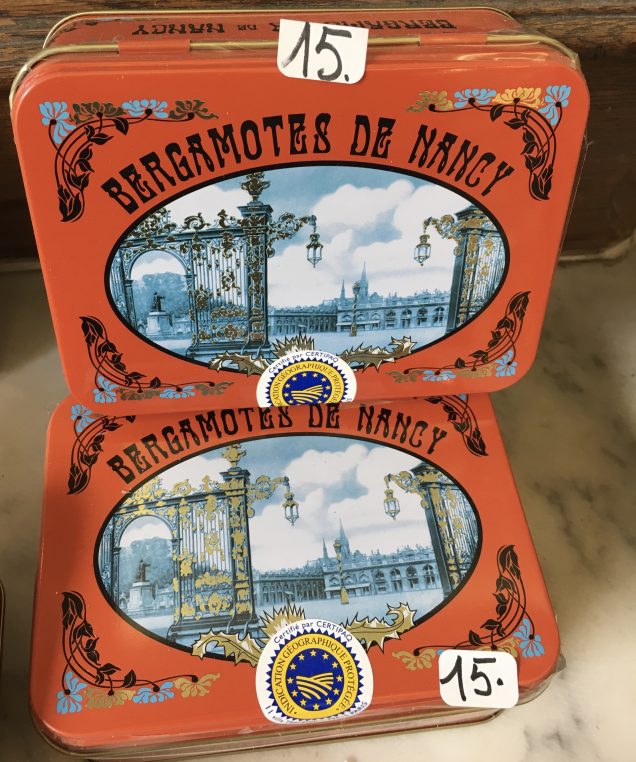 Bergamote was a favorite of Marcel Proust

We had a long conversation on the fact that no-one offered dragées (sugared almonds) for christenings anymore: hers come from Avola, near Catania in Sicily, because this is where almonds are the best. Her chocolate comes from Bonnet, in Voiron, Bernachon who makes caramel Kalouga or Voisin, the author of Le “Coussin de Lyon” which Meryl Streep apparently loves, is bright blue with almond paste inside. Her wrapping paper, which represents popular Epinal prints, is made especially for her with little quizzes and lovely illustrations. 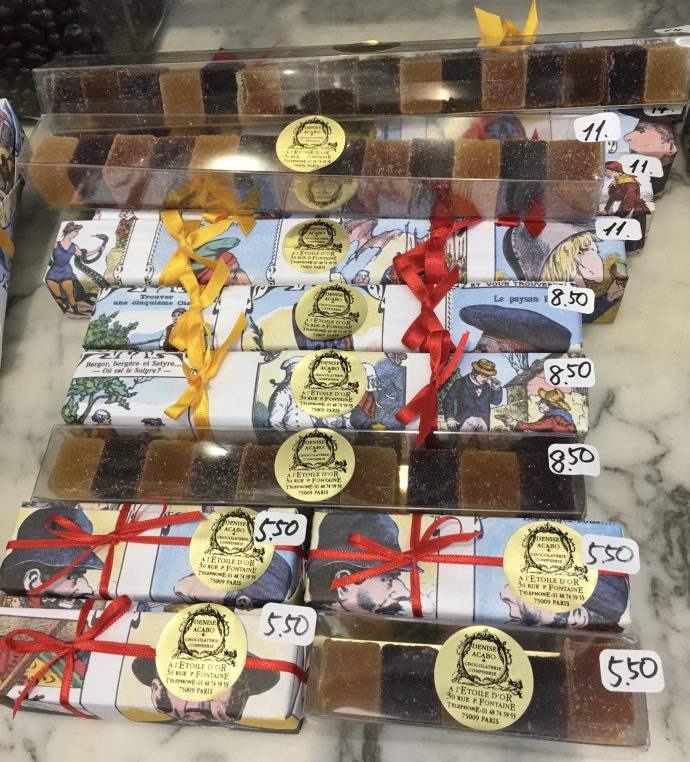 The wrapping paper is made with  Epinal prints

She sells Negus de Nevers at times, when it is not too hot (because ether stick together) and Forestines, a praline and almond mix from Berry. If you like sugared fruit, you can buy a very pretty box of Fruits confits d’Auvergne. 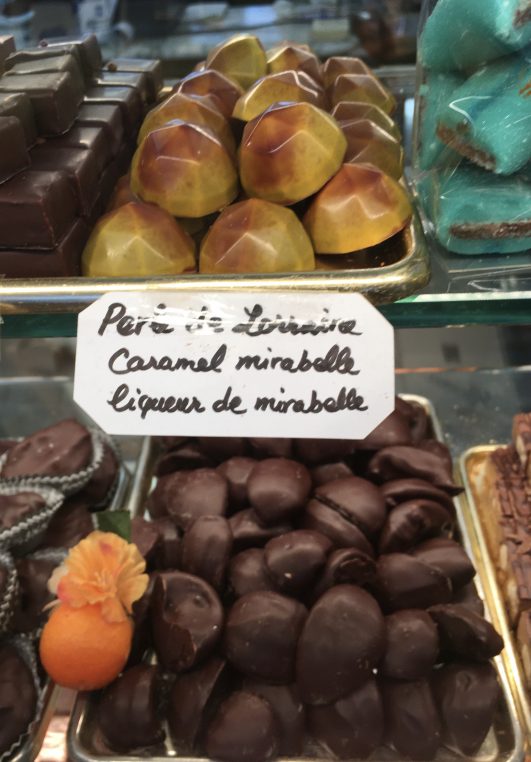 Perle de Lorraine is made with mirabelle fruit and liquor

When you buy a box of chocolates you get a selection from all over, which includes coated tangerine from Santa Lucia in Corsica, mini Florentine, mendiants or raisins with Sauternes. The poetry of each item makes it taste even better and Denise Acabo is a national monument which you need to visit. In June she turns 85.

3 Comments on “A l’étoile d’Or, a wonderful vestige of the past”