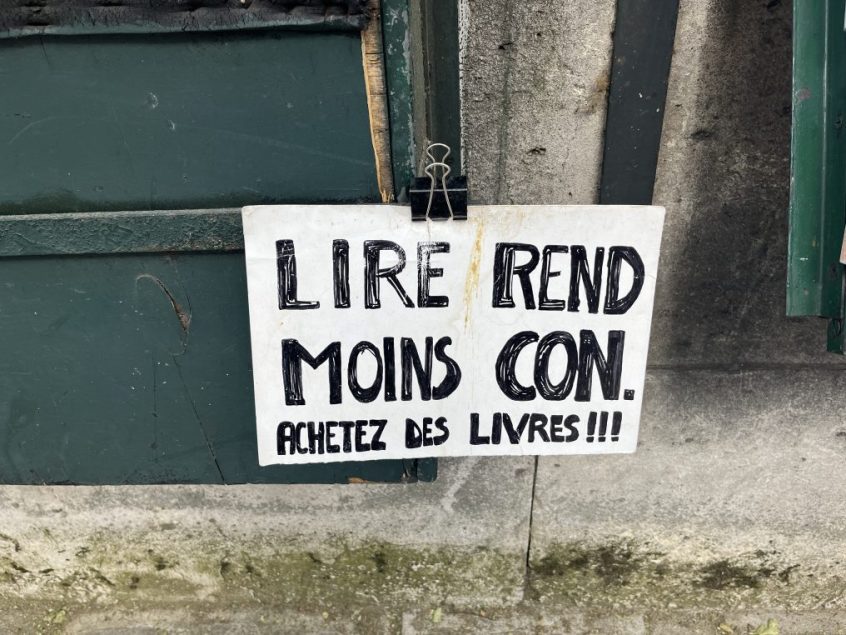 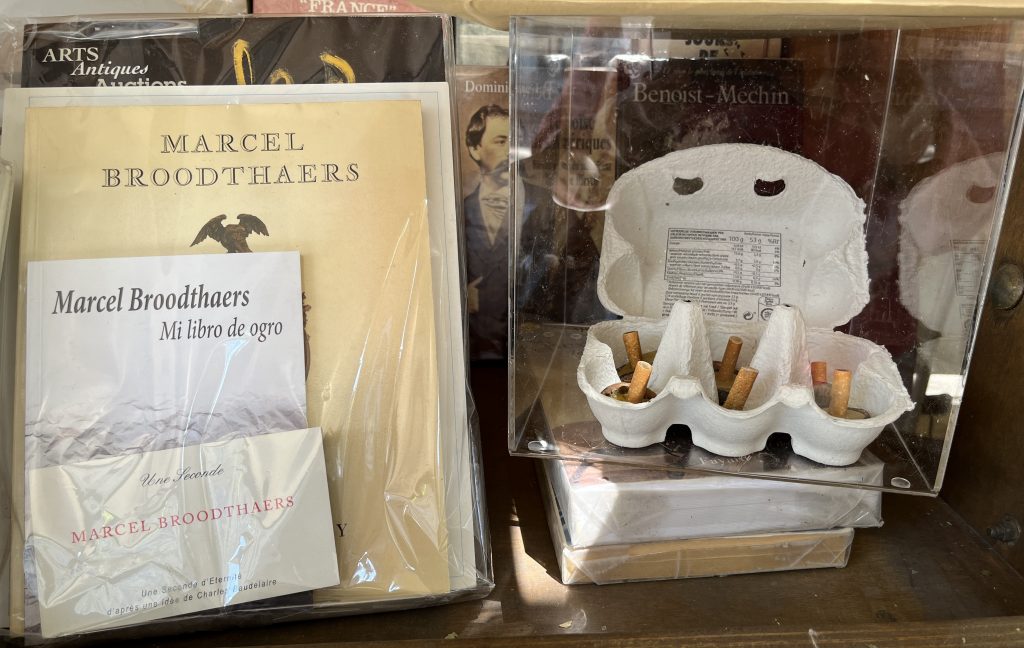 Aline Vidal who used to have a beautiful gallery on rue Bonaparte, has become an itinerant curator and manages many projects, more original one than another. After creating special artists seats for theatre La Scala, she invites us to wander around the bouquinistes of quai de Conti (across the street from the French Academy), and discover little boxes designed by a series of artists in the show De(s)rives. A few blocks further, on rue du  Bac, the well known novelist Stéphanie des Horts had a book signing in a lovely second hand bookshop Librairie Kogan, for her new sexy biography of Doris Delevingne, Viscountess Castlerosse, who knew Prime Minister Winston Churchill intimately. And Asia Society, opens its new headquarters for Europe near the Arc de Triomphe, with paintings by Hao Shiming lent by galerie HDM, Hadrien de Montferrand. 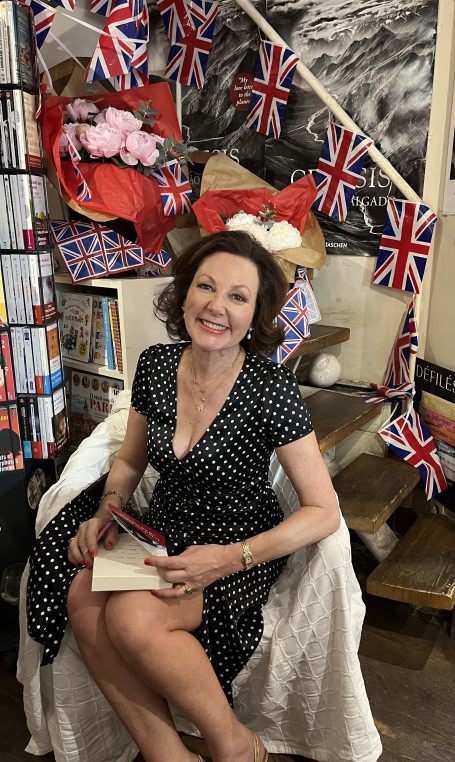 Stéphanie des Horts is one of the most entertaining novelists in Paris and she always concentrates on very attractive and seductive ladies. After Pamela Harriman, Jackie and Lee, the Livanos Sisters, The Panther, life of Jeanne Toussaint, The Secret of Rita H., she publishes her 11 th book on Doris Delevingne who had a particular passion for successful Londoners between the two wars. Churchill painted a few portraits of her in the South of France and indiscreet photographs confirm that they had an intimate relationship. Stéphanie des Horts has a lively style and creates a very sensuous story from films, photographs and multiple biographies. 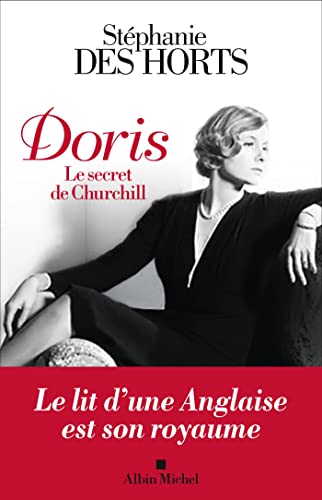 To come back to the Seine and the bouquinistes, it was fun to sdiscover Philippe de Gobert, Herman de Vries, Fabrice Hyber, Stéphane Tidet’s works selected by Aline Vidal. The contrast between the old fashioned style of the booksellers and their often minimalist art is always interesting while browsing through the collection of Egoiste and Paris Match magazines 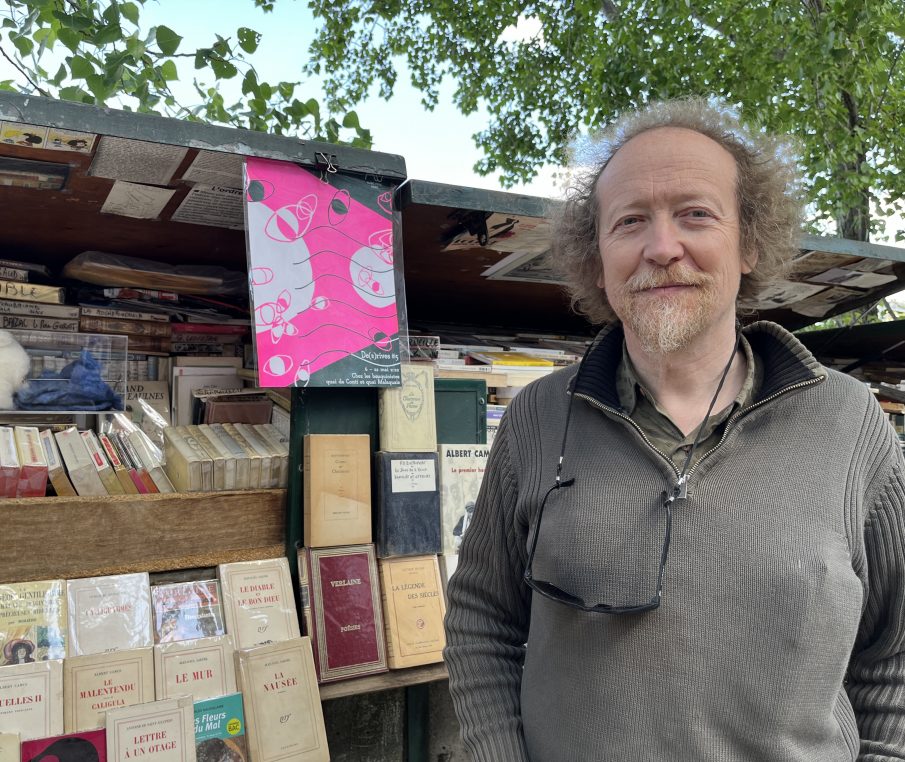 A little further next to Pont des Arts, which links the Louvre and the French Académie, Clémentine Mélois shows her extraordinary little handmade book devoted to one of her friends, a twin sister to Mona Lisa. She won a writing competition when she was 9 and the prize sponsored by Gallimard, was a gift of 365 books. This gave her a passion for books which she developed all her life. 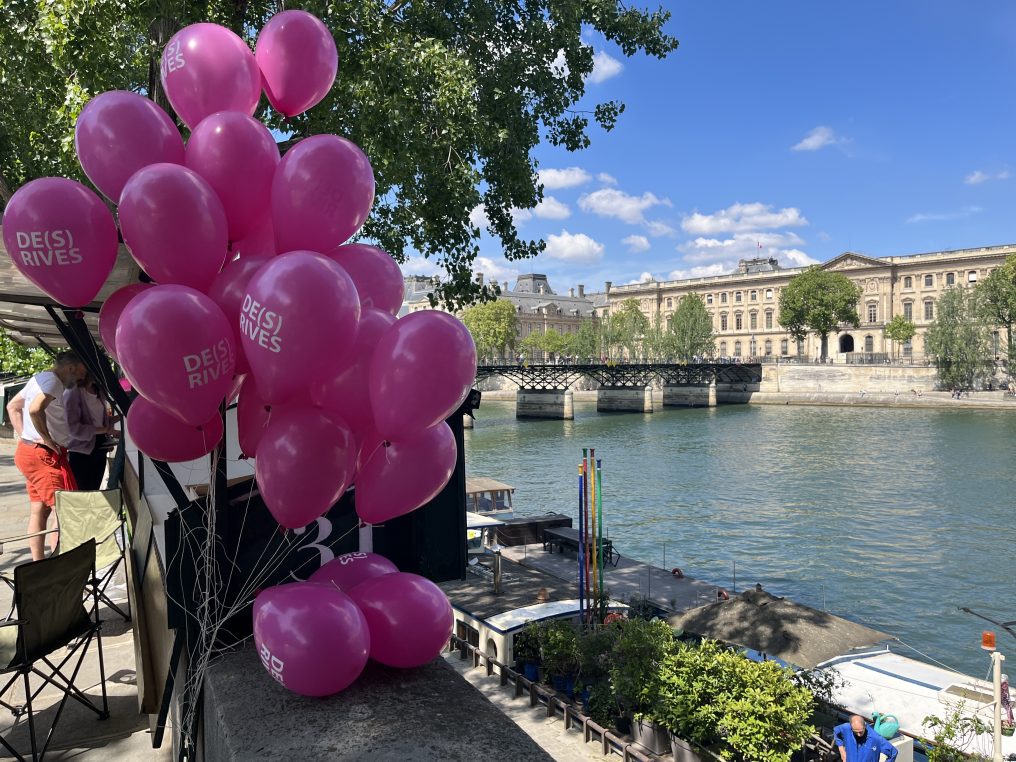 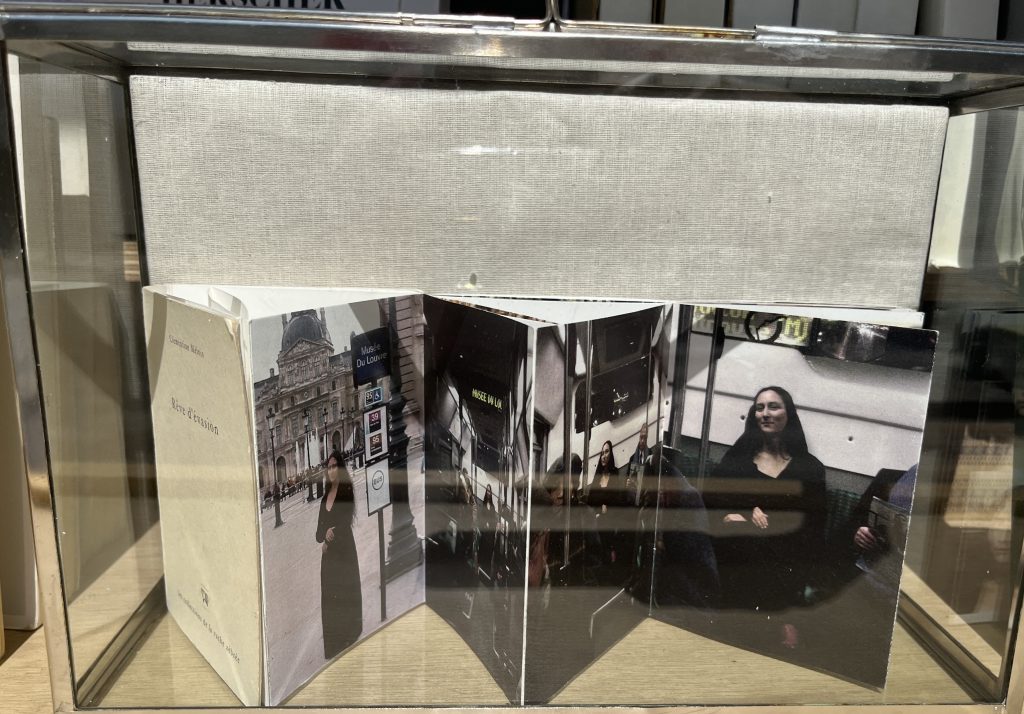 Clementine Mélois at Guillaume’s next to the Pont des Arts

Next door, the green box devised by Julie Fortier and Fabrice Hyber includes drawings and drinkable perfumes. Philippe de Gobert shows a model of architecture, Stéphane Tidet, books in porcelain biscuit. At Claire’s stand which specializes in old photographs, the artist Benoît Pype  shows the most fragile work of the exhibition, a series of blown glass bubbles within each other, Les Poupées Gigognes. All works are for sale at Aline Vidal‘s and a fun catalog (20€) in the shape of a game of cards is also available. The exhibition with 18 bouquinistes and 22 artists, is open until May 22, from Thursday to Sunday, 2 pm to 8 pm on quai de Conti. The map is given in front of 15 quai de Conti at the information desk. 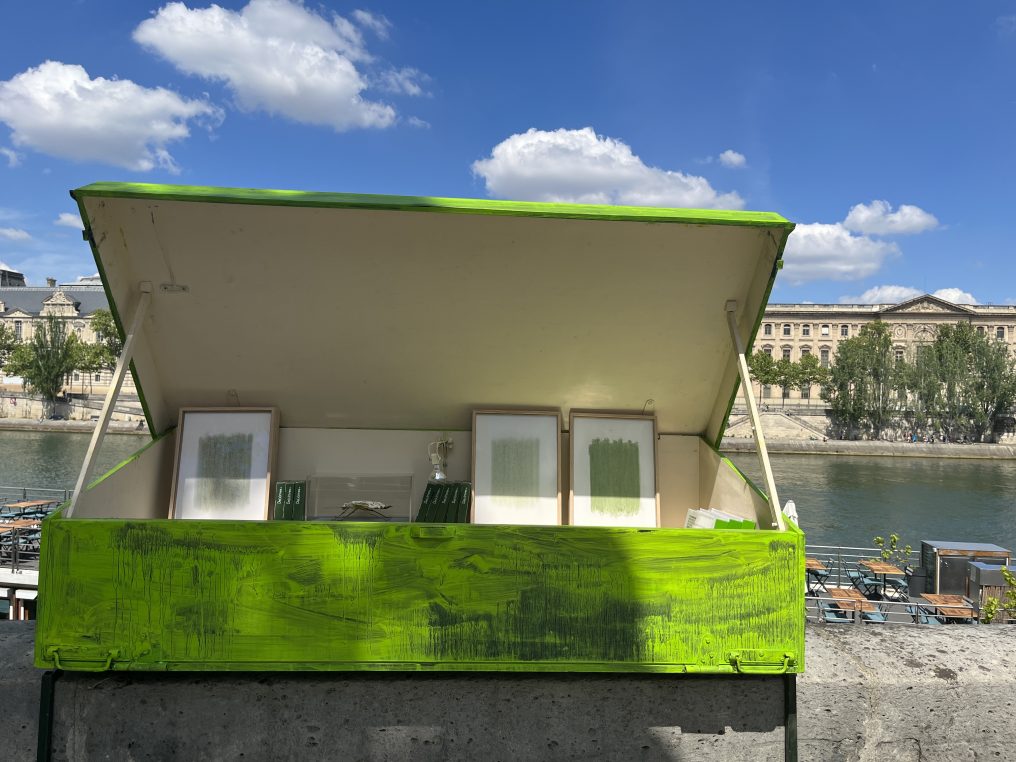 Fabrice Hyber’s box with the Louvre in the background

Art is essential to all relations in our modern world and this is the heart of partnership between Asia Society France which multiplies conferences and communication between Europe and all Asian countries,  and HDM gallery which promotes mainly Chinese artists in France and Great Britain. Hadrien de Montferrand is going to show some of his most prominent artists on the walls of their offices. The first one is Hao Shiming who is exhibiting ink works. 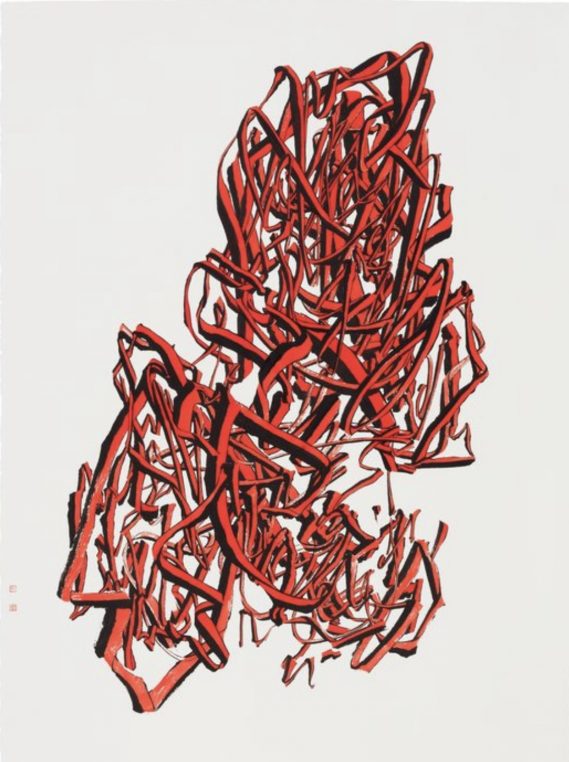 On May 18 th from 12pm to 1pm, Maurice Gourdault Montagne, former ambassador in Tokyo and in Beijing,  will discuss online the new dividing lines in Asia in light of the war in Ukraine and the situation in China. More events are taking place all year on the website of Asia Society. 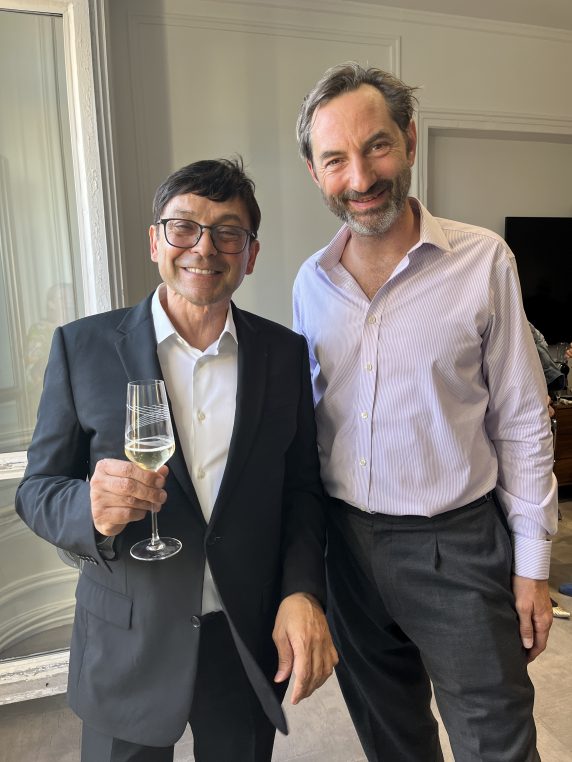 So you  see there is much to do in Paris!