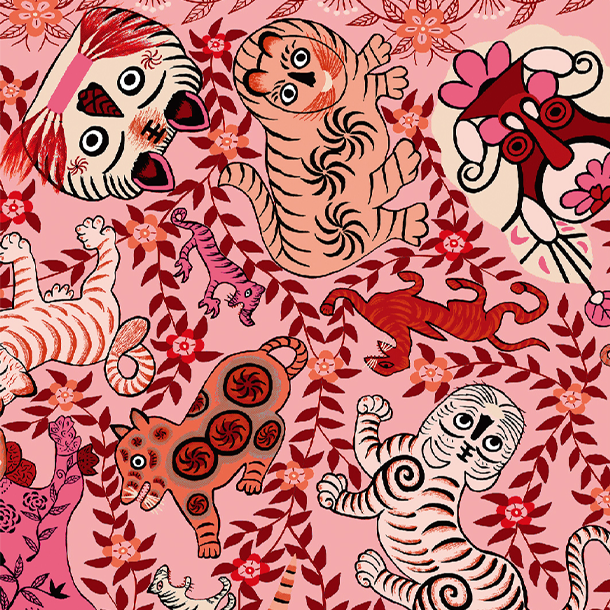 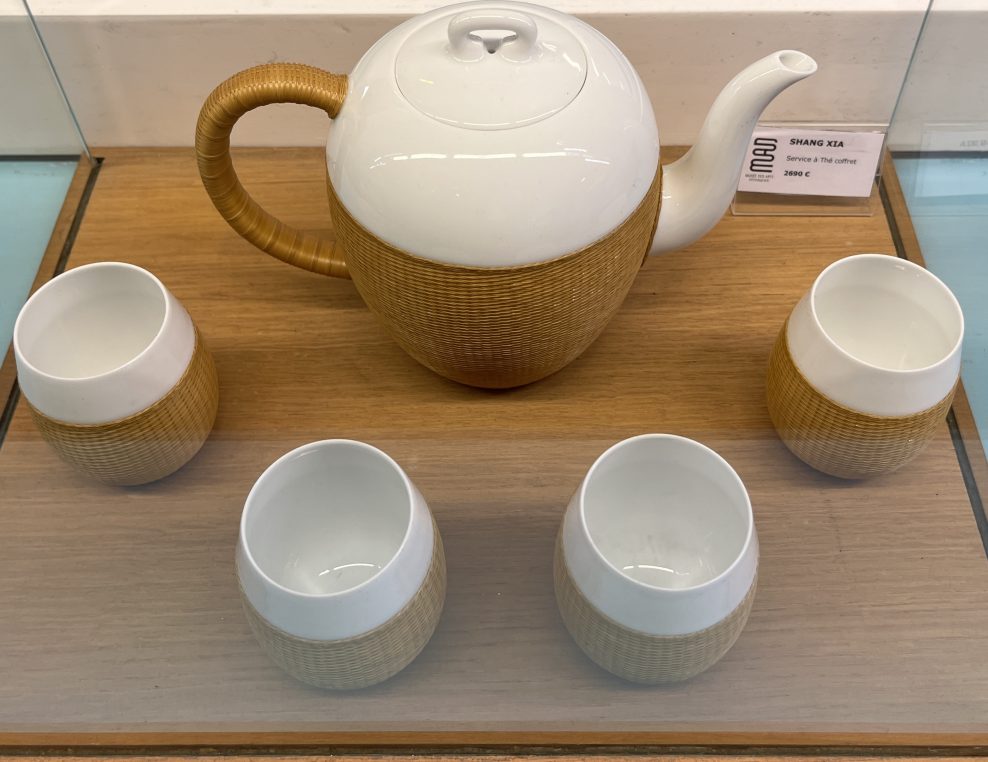 Shang Xia, tea set in porcelain and bamboo, at MAD

The day started with the celebration of Chinese New Year with Shang Xia at MAD‘s boutique on rue de Rivoli, went on with the discovery of the new contemporary furniture acquired by Mobilier National and ended with Alexandra Lapierre’s conference at Christie’s on the occasion of the paperback publication of “Belle Greene“, the extraordinary portrait of J.P. Morgan’s African American assistant, which is about to be published in the US on June 14. Paris is still “A Moveable feast“… 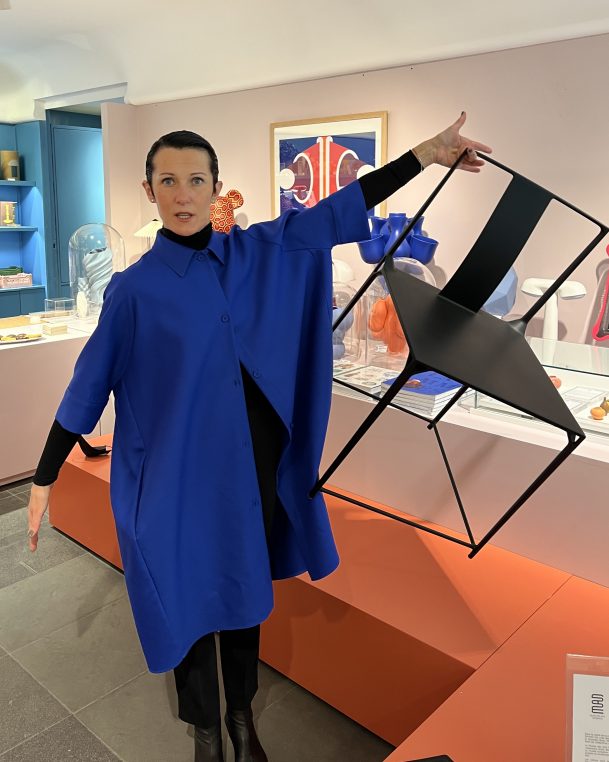 Celebrating the year of the Tiger with the team of Shang Xia at MAD was quite fun. We were served tea and Chinese pastries at breakfast and Marie Laure Meven, of the Paris office, presented the super refined items  created by the company which was founded with Hermès in Shanghai twelve years ago, by designer Qiong Er, and is now also partly owned by Exor, the Agnelli family company. There are 12 shops in China and a new show room in Paris, on rue du Vertbois, for its fashion designed by Yang Li. 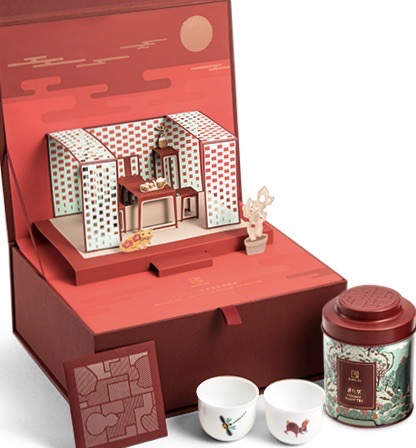 Besides the very luxurious tea sets in bamboo and porcelain and the ultra light chair in carbon fiber (a Shang Xia table in carbon fiber is in the collections of the museum), MAD sells little charm bracelets and a pop up tea box. The windows of the shop were staged by students of Ecole Camondo. Managed by Arteum, the MAD shop has wonderful ideas for presents, and multiple collaborations with brands which are keen to access the collections of MAD. Caspari makes pretty paper napkins with a special decorative motif, “week ender” bags are made with historical 19 th century wall papers from the collections and necklaces and earrings are made by Corsi or in pleated fabric designed by Greek artist, Alexandra Tsoukala, for Tsoukal. 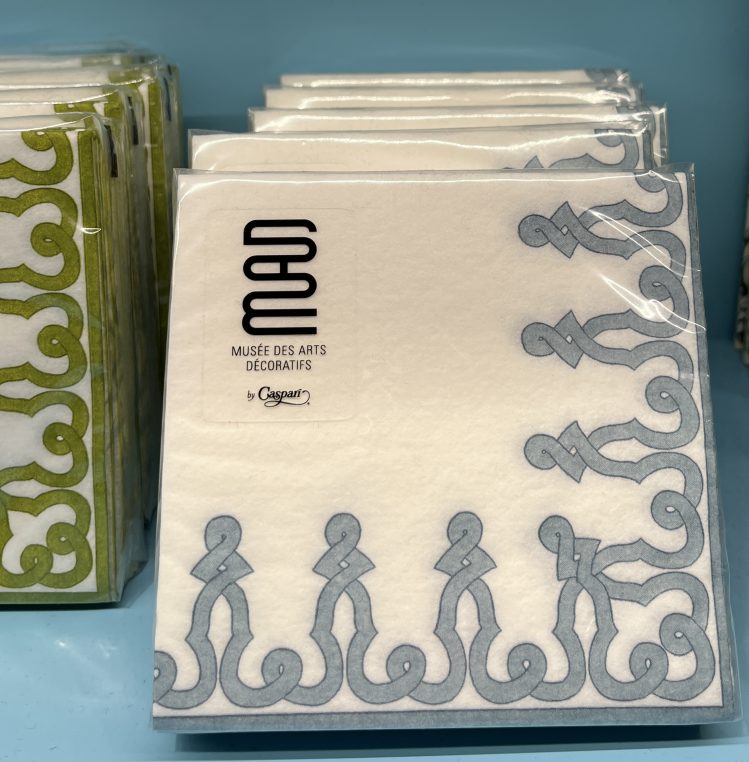 Caspari napkins sold at MAD and inspired by its collections

At Mobilier National,  the institution created to provide furniture and tapestries for all government houses including ministeries and embassies, Hervé Lemoine was presenting the contemporary works bought from young (and not so young) designers this year. In the huge building created by Auguste Perret in the 13 th, a number of desks in wood and granit, Carrara marble or steel, a banquette “Mille feuilles” made of recycled “film bulle” mattress covered in velvet, a lamp “Torsion” in copper and gold leaf by sculptor Hervé Wahlen and pretty velvet armchairs designed by Alexia Leleu. This young woman has followed in her grandfather’s steps, Jules Leleu, and developed furniture inspired from the 1920’s which is now bought by International hotels and shops and also sold at Galerie Marcilhac in Paris and Maison Gérard in New York. 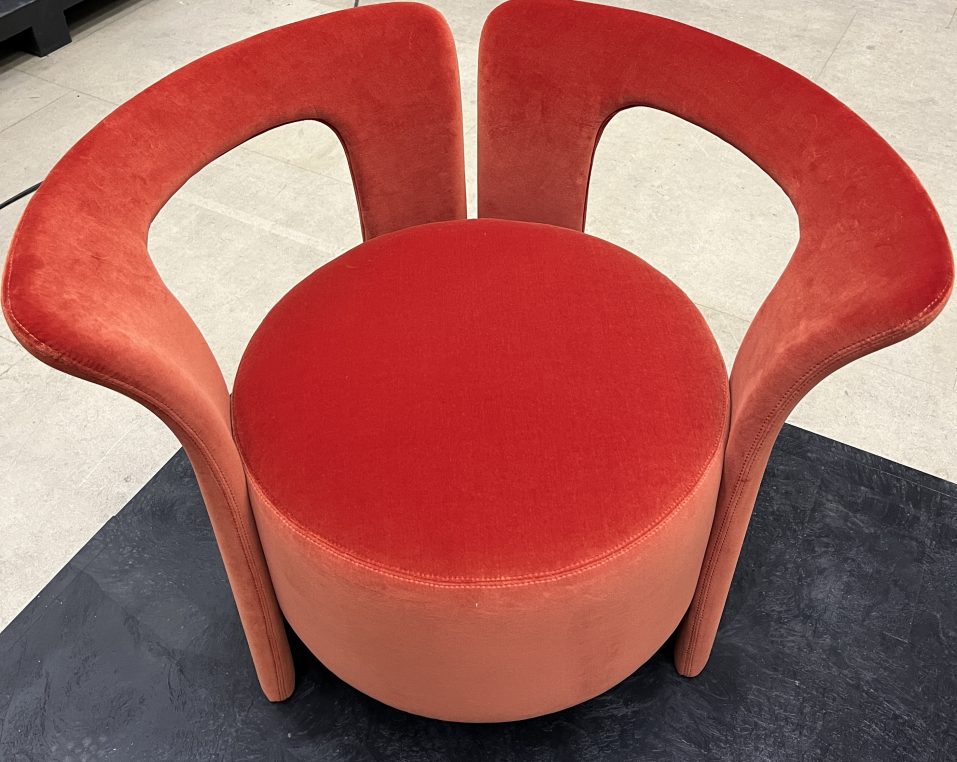 The lamp designed by coppersmith Hervé Wahlen is a real sculpture made of brass, polished on one side and plated with gold leaf on the other and sold at Maison Parisienne. The technique used for bending the brass is unique and he has inherited a collection of traditional tools owned by Gabriel René Lacroix which he not only uses for his own production but also teaches his disciples to use. His sculptures in hammered and patinated copper, are in Bill Gates’, Paloma Picasso and Peter Marino’s collections. 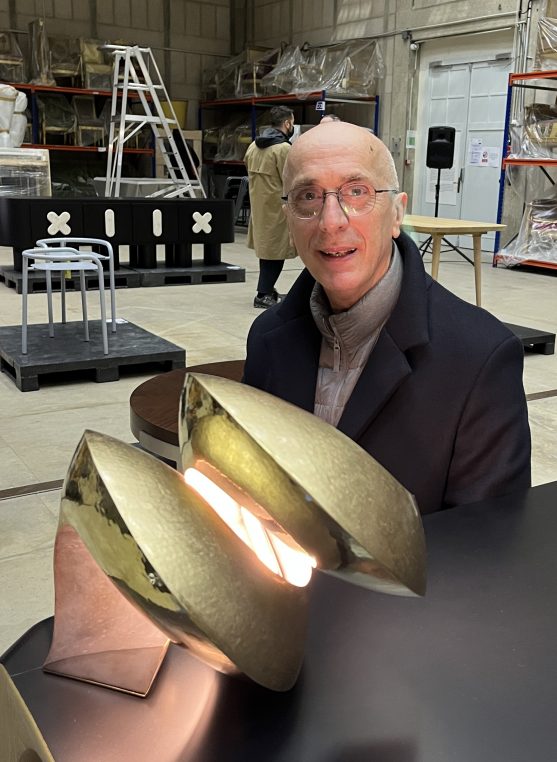 Hervé Wahlen and his lamp “Torsion” in hammered brass. In the back, under plastic covers, the armchairs kept at Mobilier National

The banquette (flat bench) “Mille-feuilles” designed by Mr&Mr, a Montpellier based studio, is made of bulle wrapping paper and I could see it fitting perfectly under the Pierre Alechinsky painting in the waiting room of Ministère de la Culture. Its layers of recycled paper and the velvet fabric make it a confortable seat and it has a dynamic allure. The two designers Alexis Lautier and Pierre Tralagrand use sustainable material and two of their banquettes have been acquired by Mobilier National. 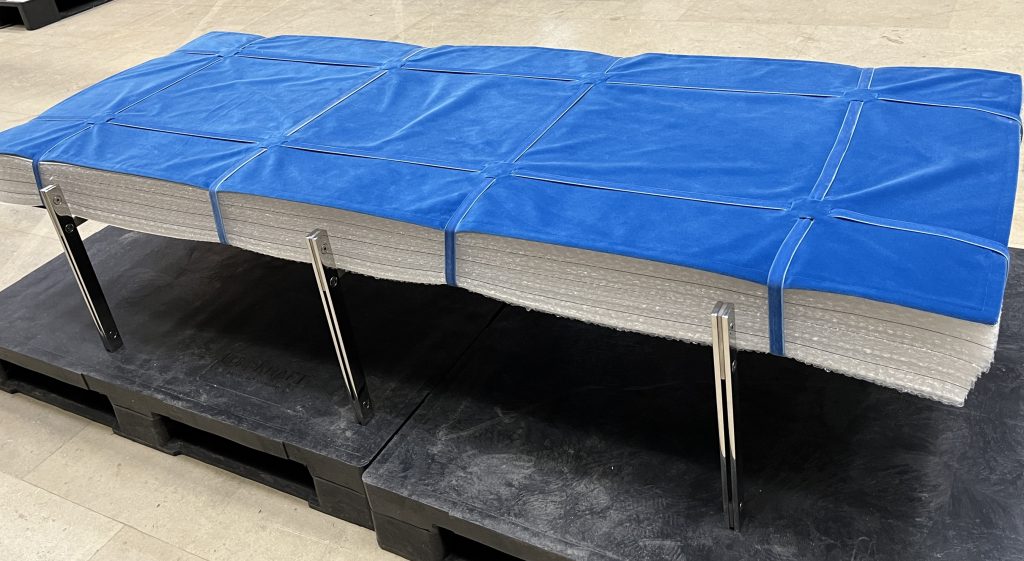 Mr&Mr’s “Mille-feuilles”, is made of wrapping bulle paper at Mobilier National

At Christie’s, the atmosphere for Alexandra Lapierre‘s conference on “Belle Greene” was electrical. While auctioneer Pierre Etienne, the old paintings expert, introduced the writer, complimenting her research skills and deep culture in art history, he alluded to the important part played by auctions in the biography of J.P. Morgan’s right hand lady, who helped him create the huge collection of books, but also of art, of the Morgan Library in New York. 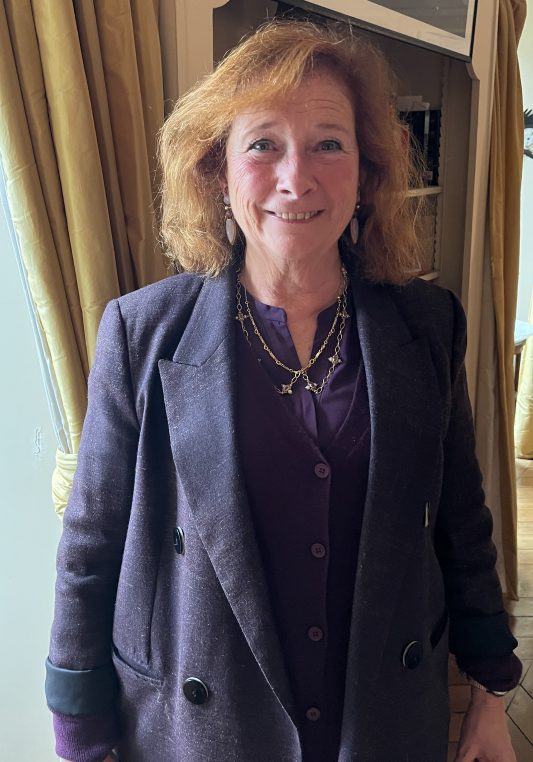 Belle Greene, born from African American parents, never acknowledged her race and led one of the most brilliant careers of the beginning of the century. She was fearless in acquiring treasures and had a very free life, accumulating lovers among whom, Bernard Berenson, was one of the most erudite and flamboyant. Chairs were being added all along the lecture as a large group of fans were flocking to avenue Matignon. And Lapierre gave a one hour lecture without notes, describing her research at the Harvard Library near Florence and her endless discoveries about Belle Greene’s Japanese half siblings. 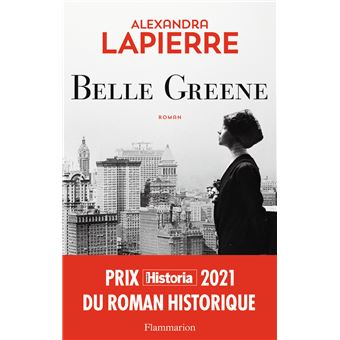 The author is now flying to Venetia to promote the Italian translation of her book and she will be in New York next June for the US publication. Film rights have been optioned by Gaumont International for a mini series.

So many events and so little time…

4 Comments on “Another full day in Paris!”