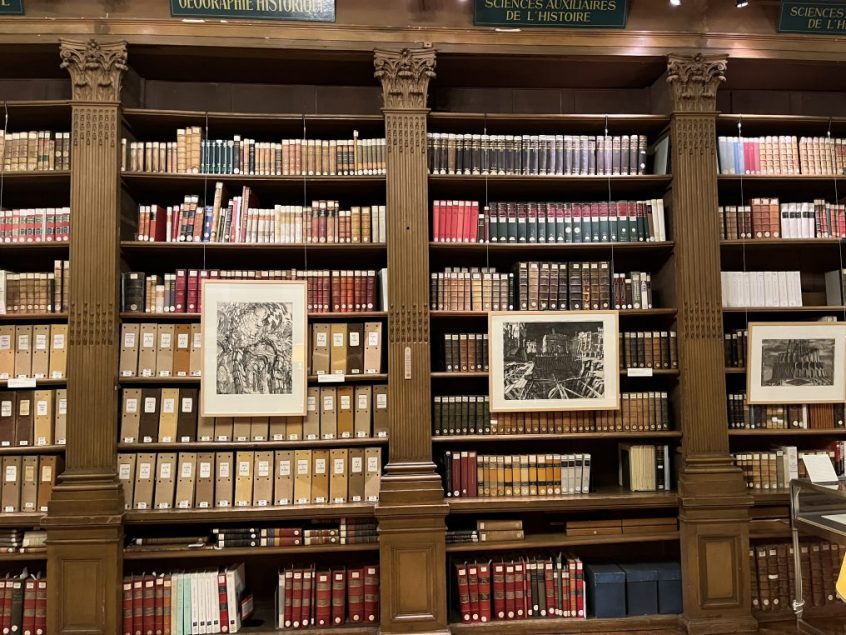 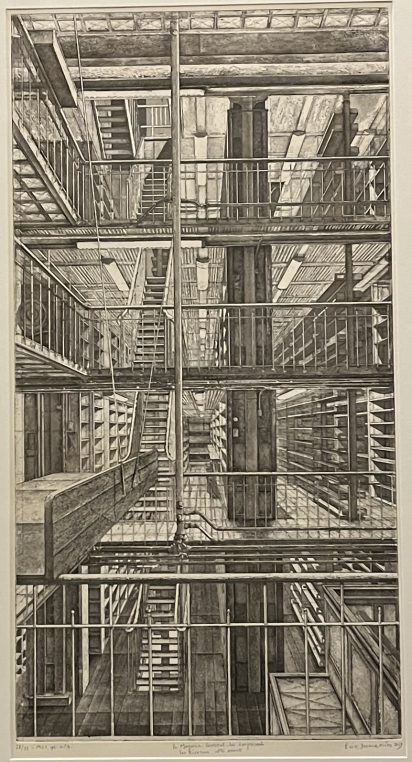 I took a friend, who is a true Parisian, to the opening of Piranesi, Albert Decaris, and Erik Desmazières‘s exhibition at Bibliothèque Mazarine and Bibliothèque de l’Institut and he was mesmerized by the beauty of the library. At 70 he had never visited it. And this is true of many French people who have no idea that one of the prettiest spots within the French Academy is open to the public every day for the consultation of rare books. “Piranèse et son empreinte” (Piranesi and his printed influence) is the new show where disciples of the great  artist (1720-1778) are exhibited on the bookshelves of two beautiful libraries which are now twined under the leadership of Yann Sordet: Bibliothèque de l’Institut and Bibliothèque Mazarine. 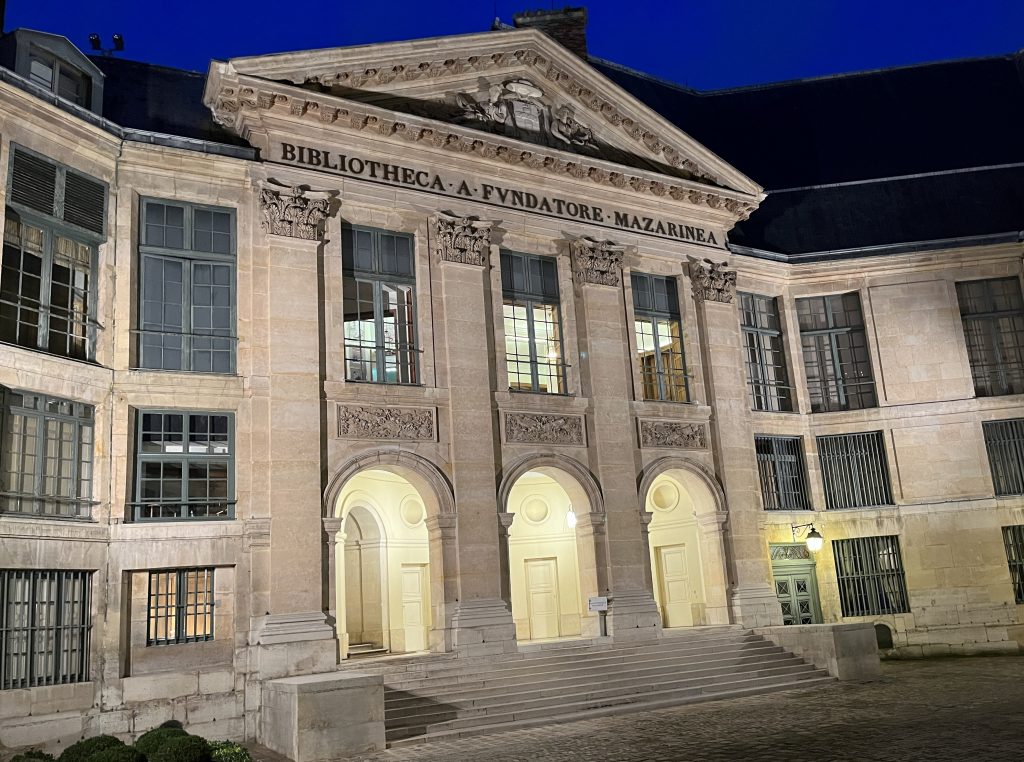 Bibliothèque Mazarine, was designed by Louis Le Vau within the building of the French Academy

Both have stupendous decors with fifty four fluted columns and wooden tablets and panelings, originally created in the XVII th century for Cardinal Mazarin’s library of 40 000 volumes, the largest in Europe at the time, on rue de Richelieu. The marble busts represent Roman emperors, writers from the Antiquity and XVII th and XVIII th centuries scientists, and the small gallery is lit by two remarkable bronze suspensions were probably made by Jean-Jacques Caffieri for the Marquise de Pompadour. There are lovely little curtains keeping the dust away form the books and wonderful movable ladders. 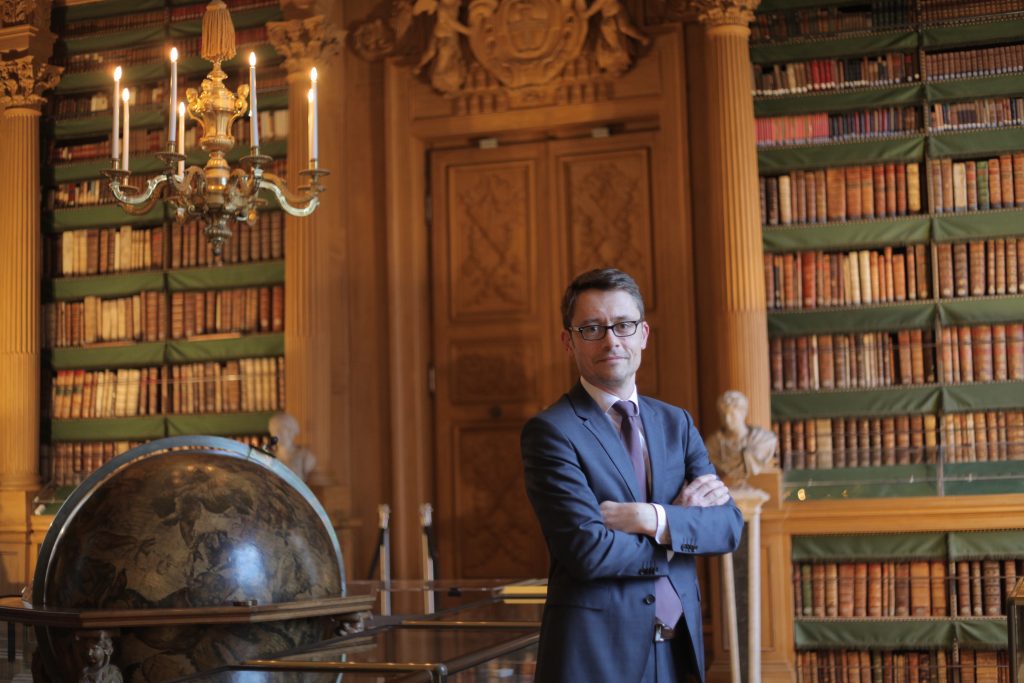 Rare books are exhibited together with the prints, Charles Nodier, Alfred de Musset and Thomas de Quincey, whose  “Confessions of an English Opium-eater” was inspired by Piranesi’s prints of prisons: he will be emulated by Théophile Gautier with “La Pipe d’opium” and “le Club des Hachichins”. The show is curated by Yoann Brault who I responsible for manuscripts. 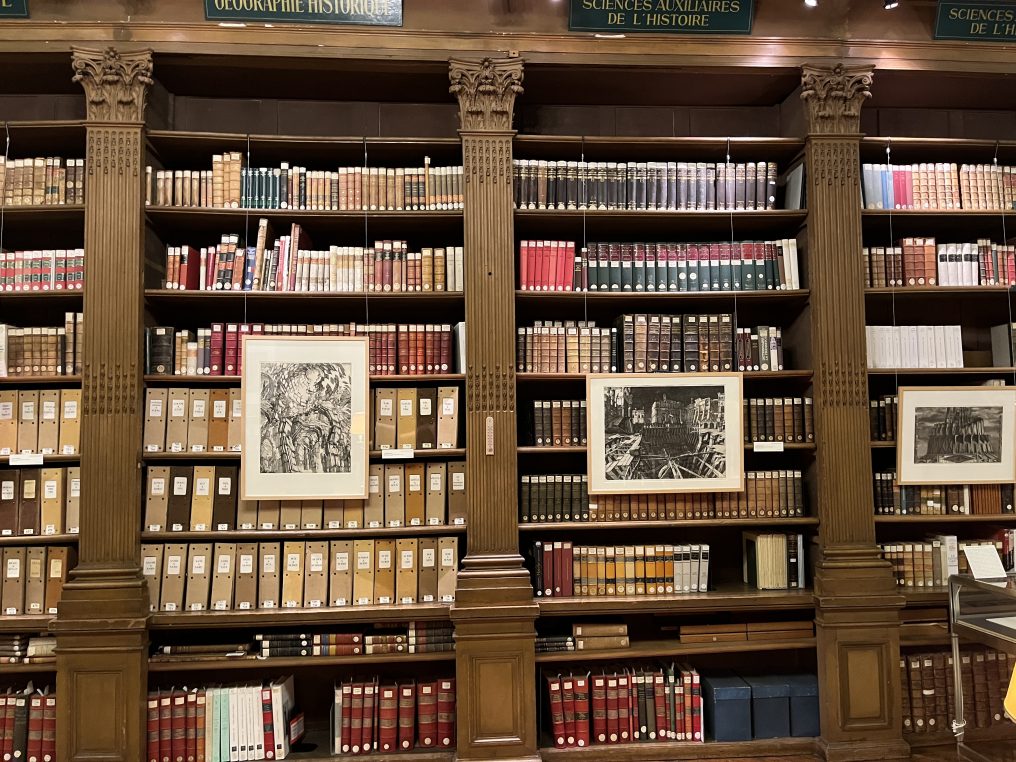 Desmazières’ prints are very well matched with the decor of books.

The atmosphere was particularly elegant in the beautiful space with just enough Academicians (Adrien Goetz, Michel Zink, Pierre Antoine Gatier … and of course Erik Desmazières) chatting with their guests among whom there were many bibliophiles and fans of the artists. I have to say he presented my favorite prints of libraries “Magasin central des imprimés” and visionary buildings, “La Tour de Babel”, inspired by Jorge Luis Borges’ Biblioteca. (The modern English edition of which has a print by Desmazières on the cover) 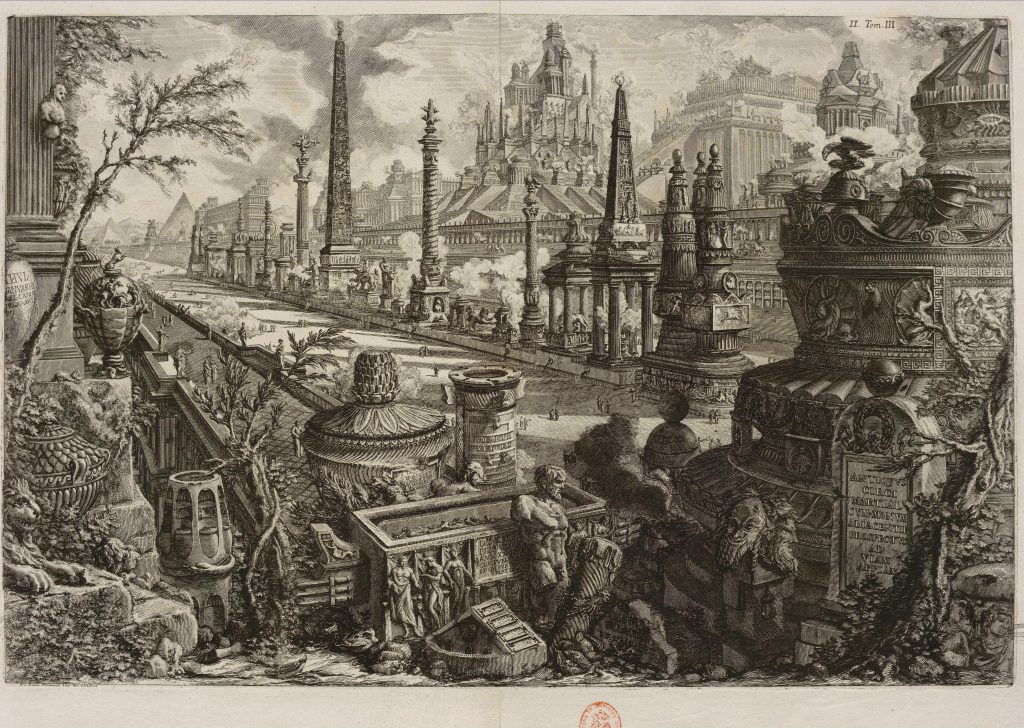 It is thanks to Piranesi’s sons, who planned to open a printing school in Paris in 1800, and ended up founding (financed by the French Government), the Académie des Beaux Arts that the school was born. It was separated in seven classes with 30 professors and 300 students. This helped to promote Piranesi’s art engravings and revive the public’s interest in his works which became again very prominent in the 1930’s. You can see a whole series of his prisons from the Cini collection in Aix en Provence, at Hôtel de Caumont, at the moment. 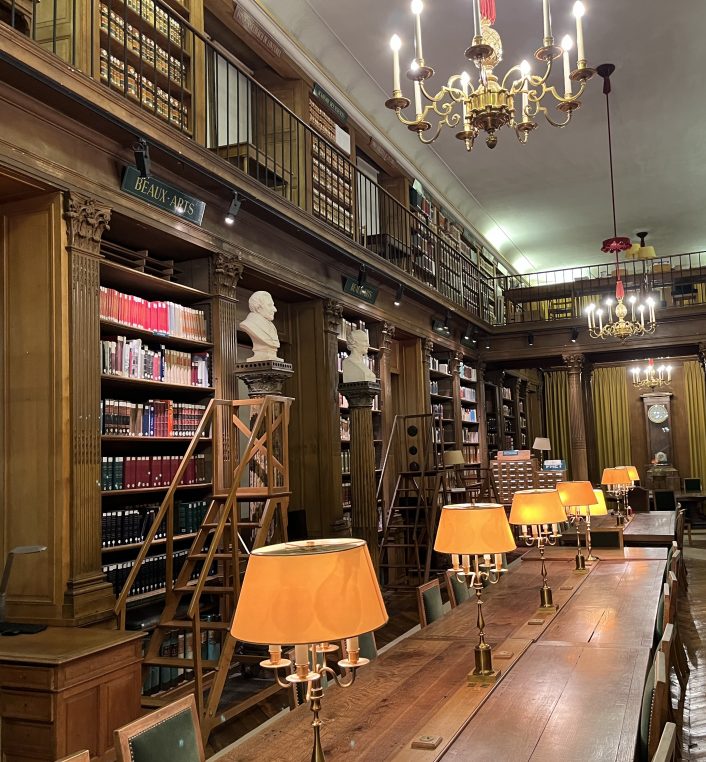 Bibliothèque de l’institut, where Desmazières’s prints are exhibited, is usually never open to the public

So this is a unique occasion to visit both libraries. Bibliothèque de l’Institut, adjacent to the Mazarine is usually not open to the public. And to see great art on top until May 14 from Monday to Saturday 10 am to 6 pm. Entrance is free and just walking up the beautiful Neo classical staircase designed by Léon Biet is a treat. There are 600 000 books at the Mazarine which can be consulted after registration. Erik Desmazières’s prints an catalogs are available at Galerie Documents 15, 15 rue de l’Echaudé very near the Institut.

4 Comments on “At Bibliothèque Mazarine, Piranesi and Desmazières have a ball”