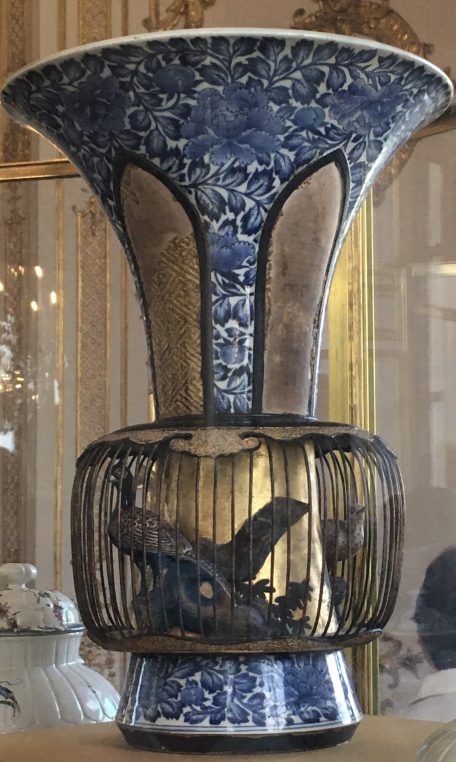 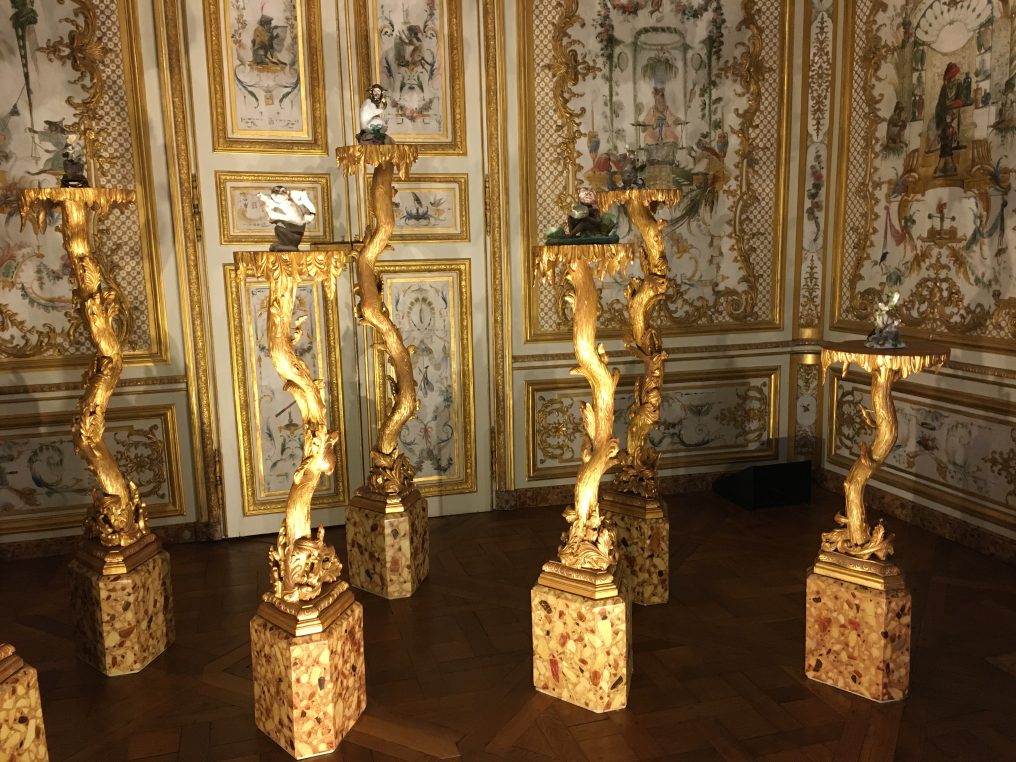 The Grande Singerie created by Christopher Huet in 1735, is suddenly populated with extraordinary monkeys from China, Meissen and Chantilly presented on columns designed by Peter Marino

Château de Chantilly has been undergoing many restructurations in the last twenty years and the latest news is that Institut de France is now the only master aboard after the generous  benefactor, His Highness Prince Karim Aga Khan, has decided to move to Portugal. The first exhibition under the new era had to be a huge success and it is. Inaugurated last Saturday by Xavier Darcos, chancellor of the Institut, the show was an idea of Prince Amin Aga Khan who developed it with curator Mathieu Deldicque and the museum of Dresden: “La Fabrique de l’Extravagance” (Creating Extravagance) is a glamorous, exciting and beautiful dialogue between two Princes, thanks partly to the scenography by Peter Marino (who staged the Zwinger museum for porcelain in Dresden) and largely to the work produced by the curators. Chantilly is back as the leading palatial museum near Paris under the administration of Christophe Tardieu who already promised many new attractions like outdoor cinema. Nicole Garnier, curated a Carmontelle exhibition of pastels and gouaches which is adorable. 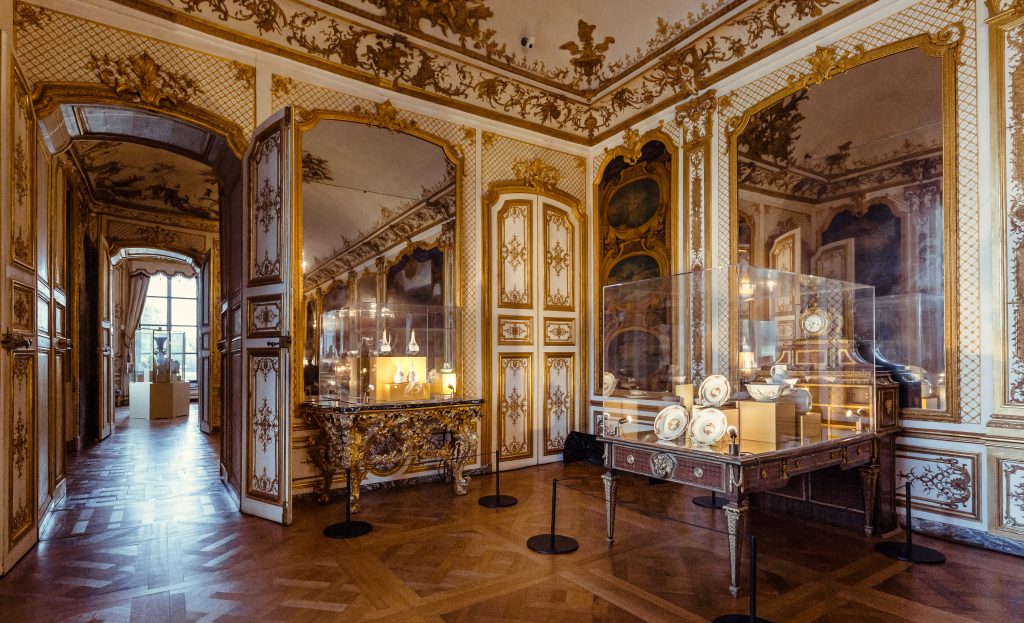 In the Galerie des Batailles, the porcelain is presented on precious 18 th century furniture

When Mathieu Deldicque realized that Augustus the Strong (1670-1733), Elector of Saxony and King of Poland, and Prince Louis Henri de Bourbon-Condé, Louis XIV th’ grandson and Prime minister under Louis XV, had in common a passion for porcelain, he decided to unite their pieces inspired by Japan and China, between 1710 and 1735. Both were avid collectors and both sponsored their own manufactory which then copied the originals. Porcelain was considered as “white gold” and it is an incredible miracle that so many pieces (129) could be assembled. The German collection of 29 pieces from Dresden and more from the Keramikmuseum in Düsseldorf, only arrived two weeks ago… Cyrille Froissart, a leading porcelain expert was at the opening and confirmed the spectacular level of this show.

Many curators and top porcelain lovers had driven on Saturday night to Chantilly to be part of this event and while sipping champagne outside,  everyone remembered last year’s gala evening organized by Amyn Aga Khan to raise money for the show. The Prince was there, particularly happy to see the results of his efforts, and despite Peter Marino’s absence the objects spoke for themselves. Mathieu Deldicque was surrounded by a crowd of young curators and bloggers who celebrated his talent and his new nomination as art historian on Darius Rochebin’s tv program on LCI television. Academician and writer Adrien Goetz was also present with 18 th century expert Alexandre Pradère, art historians Sylvie Vriz and Vincent Bastien, Damien Dumarquez and Raphaël Aracil de Dauksa, from Galerie La Nouvelle Athènes. 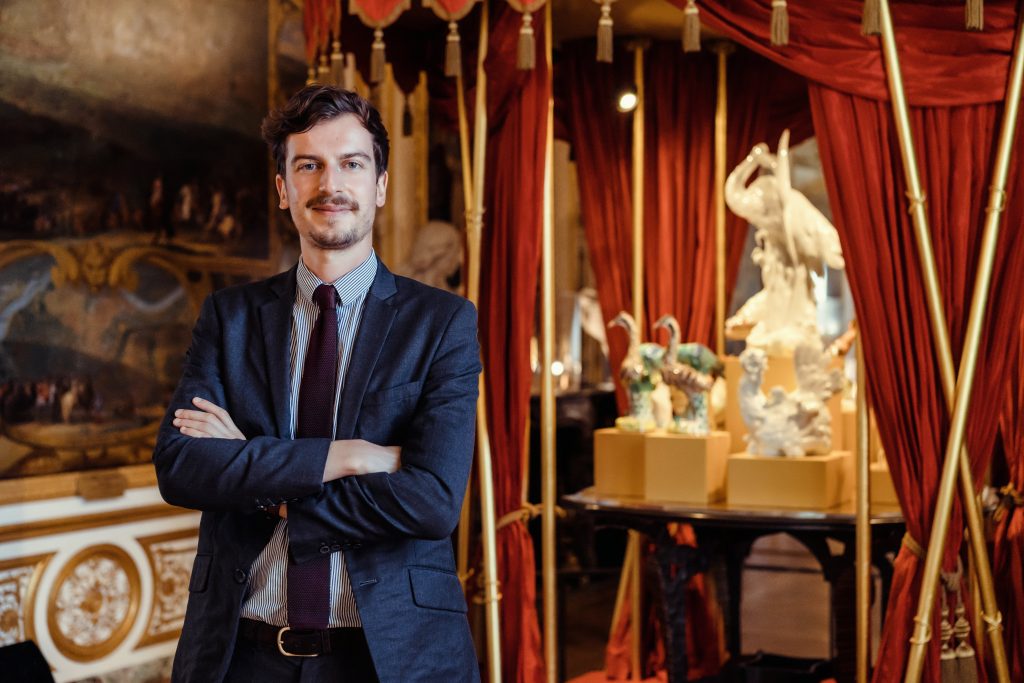 Curator Mathieu Deldicque in front of the aviary

Animals such as elephants, deers, leopards, lynx, pugs, monkeys and dogs take a large part in the success of the presentation with their colorful decors. Birds are also well staged and two large white birds from Meissen reign over a whole aviary in the tents created by the decorator. Augustus the Strong had aviaries in his hunting lodge of Moritzburg, North of Dresden, as well as stuffed birds in his palace of Dresden. Some are mounted as candelabras, wall lights or as Ormolu clocks. The difficulties encountered and won over by this exhibition over the last four years, have shown the strength of the artistic collaboration between Germany and France! 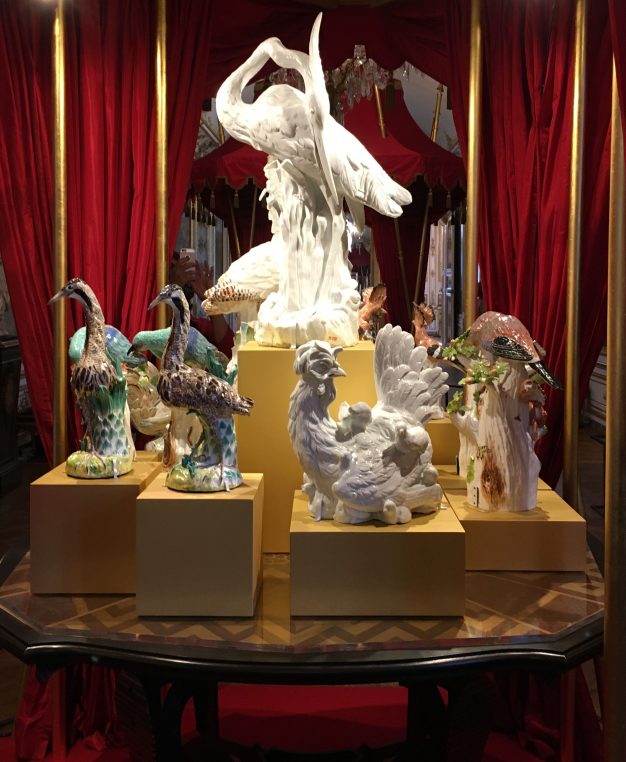 The general idea was to make porcelain “sexy” as Deldicque indicated, and use a spectacular setting in the Large apartments of Musée Condé,  to wet the appetite of new visitors, young and old. The series of clocks are prodigious, with a rhinoceros, an elephant, a swan, some parrots or a group of musicians-monkeys. But there are also smiling buddhas and these extraordinary pugs which were collected by free masons in Germany in the 18 th century. A Belgian collector has lent three of them. The most spectacular vase is a Japanese vase cage from Narita, with an imprisoned bird collected by Condé and now at Musée de Pau. MAD also sent a number of pieces as did Château de Fontainebleau. 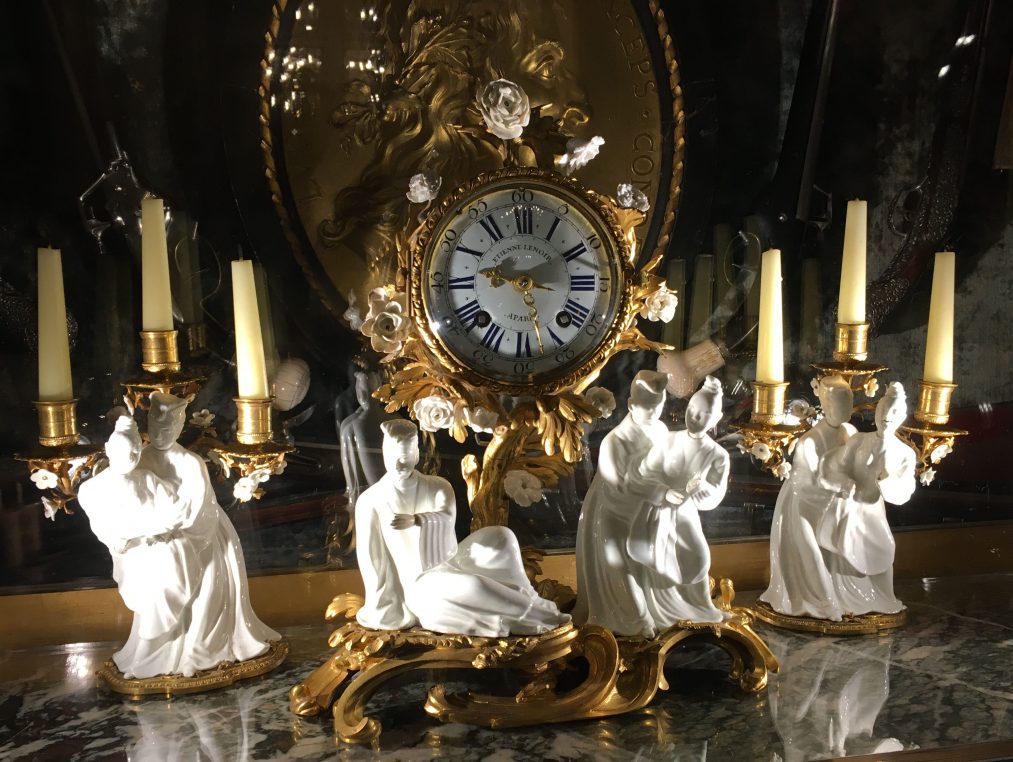 On the second visit I noticed different beauties like this group of Bunraku puppet manipulators in pure white porcelain from Japan who like Nô and Kabuki formed a type of theater.  Also a series of Japanese vases with Kakiemon (enameled ceramic) decors and six sided Meissen vases. The exhibition owes a lot to Jean-Antoine Fraisse’s book of Chinese drawings kept in the library at Musée Condé. In 1735, this painter from the fabric manufactory (Indiennes) in Chantilly, lent all his drawings to the newly founded porcelain company. He based his paintings on Prince de Condé’s collections imported from the East and thus created an impulse for the Chinoiserie style. The book is exhibited in one of the salon and a fac simile published by Monelle Hayot, can be acquired in the bookstore. 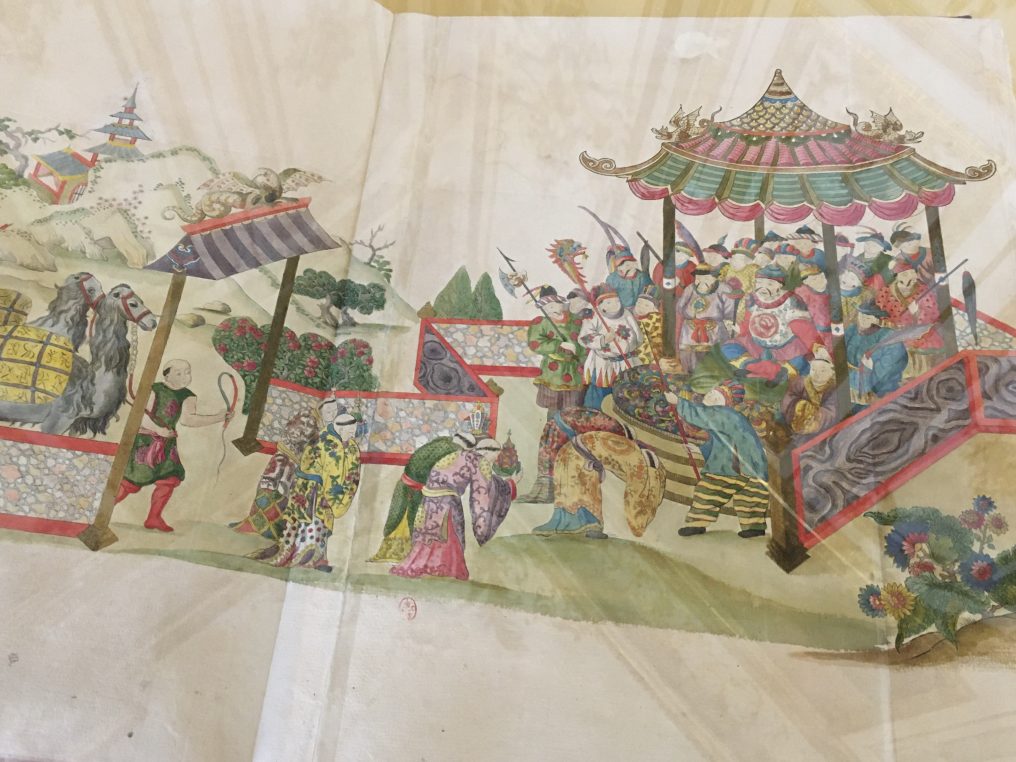 The Singerie is definitely the most spectacular room of the show with monkeys dancing on resin sculpted and gilt columns in the monkey decor by Huet. I did not like the overwhelming military red tents in the long gallery nor the heavy wooden bases for the china but it was a great idea to show some pieces, either hidden in antique cabinets or presented on 18 th century desks. There are many exquisite surprises like this laughing buddha, God of wealth, lent by MAD, or the collection of three huge white birds, a heron and an Ara from Dresden with a vulture from Sèvres. When one thinks about the huge risk of transporting porcelain, aggravated by the health complications and the closing of borders, one realizes how precious the collaboration of the German ambassador has been. 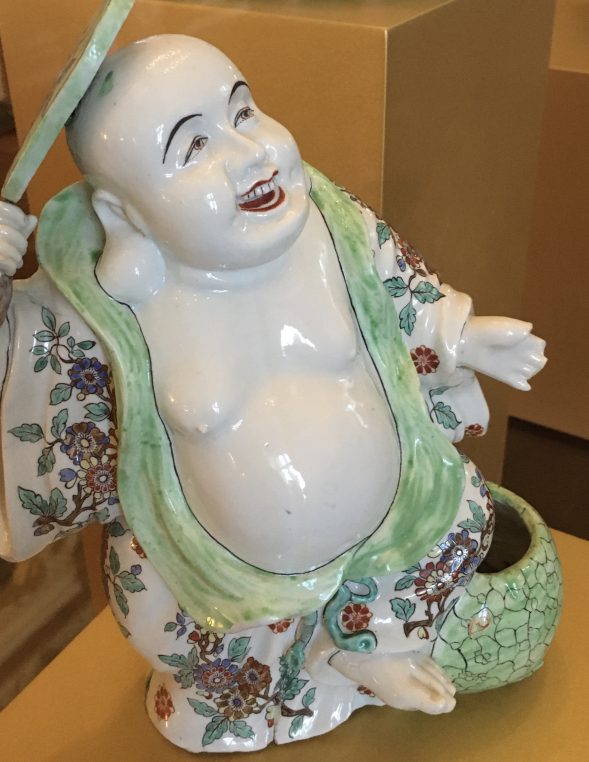 A new era is yet again starting for Chantilly and the depth and serious of this exhibition is reassuring. It is glamorous but not bling bling, luxurious but strict in its realization. Now one wishes that more Academicians get involved in the running of this jewel which belongs to them. The young generation of talent artists should do wonders!

Until January 3, 2021, Château de Chantilly. The catalog published by Monelle Hayot is a steal at 29€