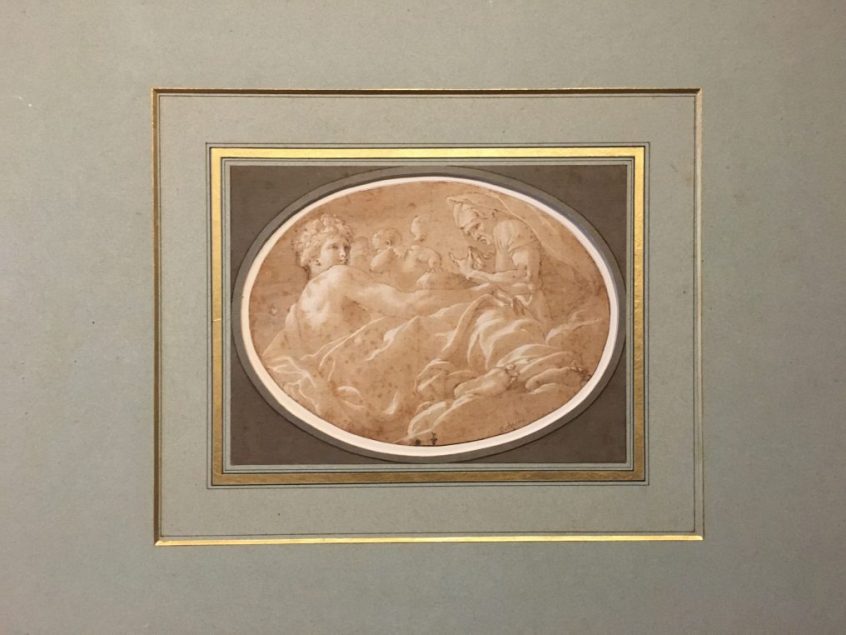 It has become a huge effort to visit Château de Chantilly and its wonderful collections. This Saturday, the electric gates to enter the parking lot were not working properly and everyone was enraged. I could not find anyone to help my friend Garance, who walks poorly, and reaching the drawing galleries through the main court is an ordeal. The usual golf carts were nowhere to be found and, mostly, nobody cared. The windows of the galleries were disgustingly dirty and no one seemed to notice. “We are very understaffed” was the only answer I received when I asked the guard at the entrance for help. So it was a relief to spend a half hour with the Primatice drawings, collected by Duc d’Aumale, which are projects for the galleries and ballrooms at château de Fontainebleau. And we furthered our visit with the Abbaye de Chaalis, 20 kms away, which is under huge renovations, with its new administrator Alexis de Kermel. Its chapel painted by Primatice is a well hidden treasure and parking is free.

Nicole Garnier and Matthieu Deldicque (who both graduated from Ecole des Chartes) form a fabulous team at Musée Condé and the transfer of power between the two curators is taking place smoothly. Nicole, when she retires this winter, will remain very close to the castle and very active through the Société des Amis du Musée Condé. What at relief! The new administrator, Didier Selles, resigned after two weeks on July 14, because the Institut de France had signed a deal to create a luxury hotel in Château d’Enghien (the building on the right when you enter the park), without consulting him.

His own project was to create a residence for artists and art historians, a small Villa Medici, twenty minutes away from Paris by train. A visionary idea for this incomparable collection of art which, through Duc d’Aumale’s will, cannot travel anywhere. While Versailles and Chambord have both developed very expensive luxurious boutique hotels, Chantilly already has L’Auberge du Jeu de Paume, created by Prince Amin Aga Khan, and the economics of it are still to be proved. A new administrator is announced for September? It will be the third in two years.

François 1er, the Renaissance king, moved his court to Fontainebleau in 1528, leaving the Loire valley after Leonardo da Vinci’s death, and Rosso Fiorentino (the red hair painter), Primatice and Nicolò dell’Abbate followed him, creating the most amazing decors in the new castle. The Galerie François 1er, the Galerie d’Ulysse and the ballroom were completed in thirty years. In the 19 th century, Duc d’Aumale often stayed in the castle as a guest and had a particular inkling for Italian Renaissance art. His drawing collection is one of the most complete in the world and the discrete galleries devoted to showing it are beautifully decorated.

I loved the modern style frames with blue or grey marie louise. But also the numerous equestrian portraits of Henri II and Henri IV, and the elephant being stung by a bee on one of the cups projects.

Primatice also worked in Chaalis where he created in 1544, the most amazing decor for Hippolyte d’Este, cardinal of Ferrare in the chapel Sainte Marie. This Cistercian abbey was bought by Nelly Jacquemart the famous collector and sculptor, whose Paris house, has become Musée Jacquemart André. The Château de Chaalis also belongs to l’Institut de France. 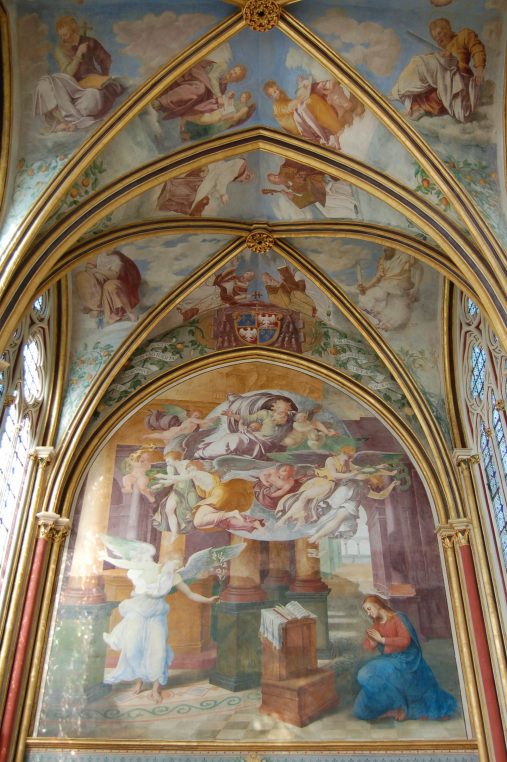 On October 8-10, Les Journées des Plantes, a festival of rare plants,  will be another major attraction in Chantilly and you can visit the castle for free with your ticket. Château de Chantilly, “Le trait de la Séduction” is on until November 7.On September 11, teh film Vatel will be projected in the outside and you can bring your picnic. 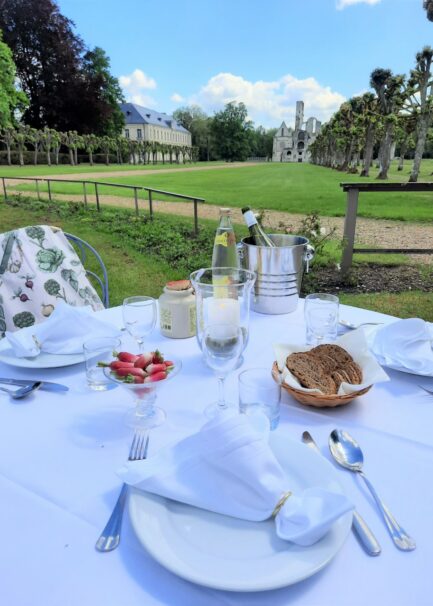 Abbaye de Chaalis is open every day except Tuesdays. There are tours organized on Saturdays at 3 pm. From Thursday to Sunday, the new restaurant Le Pavillon de Chaalis, run by Nicolas Castelet, another chef from Aveyron, who worked briefly at Maxim’s, serves lunches and dinners. On the evening Friday 17 th, a pic nic is organized where you bring your food and Chaalis offers the drinks. The Abbaye is getting alive! What fun.

3 Comments on “At Château de Chantilly and at Abbaye de Chaalis, Primatice reigns”