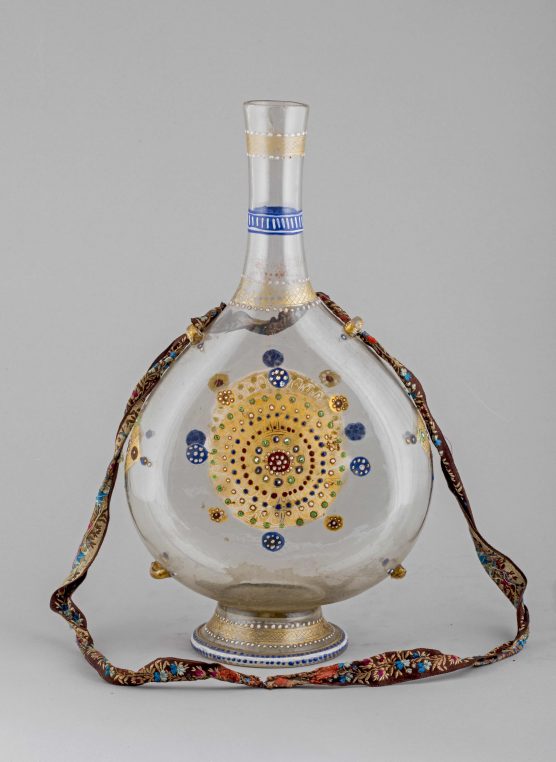 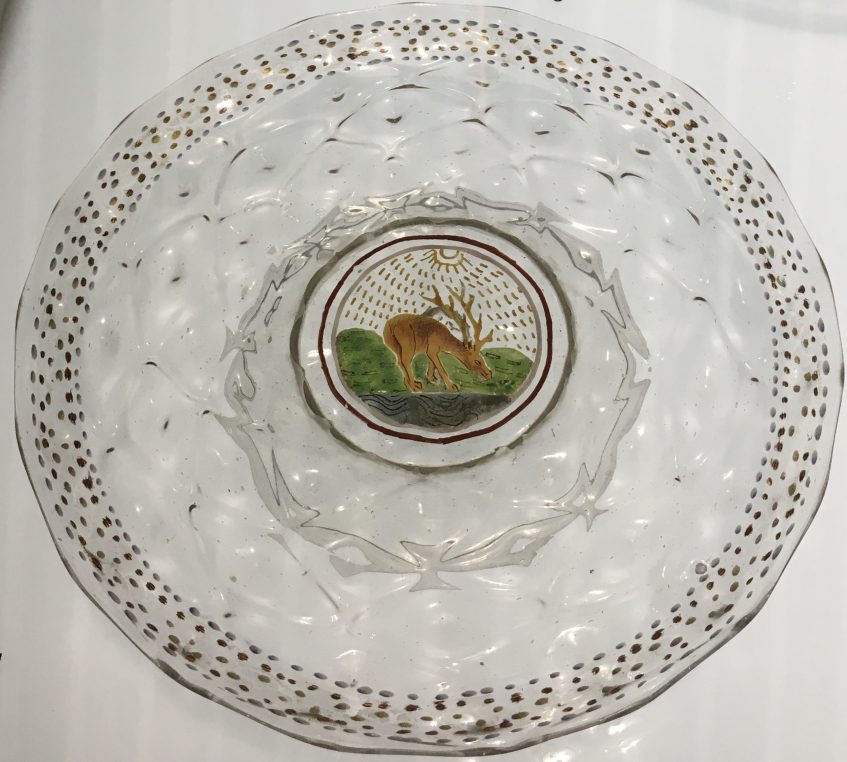 Going to Musée de la Renaissance in Ecouen is always an adventure but the prize at the end is precious. This time, it only took fifty minutes to drive through St Denis and Sarcelles and the most beautiful weather was expecting us in the forest surrounding the castle. Yellow parrots were flying over the roofs and the exhibition “Emailler le Verre à la Renaissance” (Enameled glass in the Renaissance) set in Cathrine de Medicis’ apartments gave an extra bonus to the visit of the permanent collections which include paintings, tapestries, decorative objects, fireplaces and furniture of the highest quality. 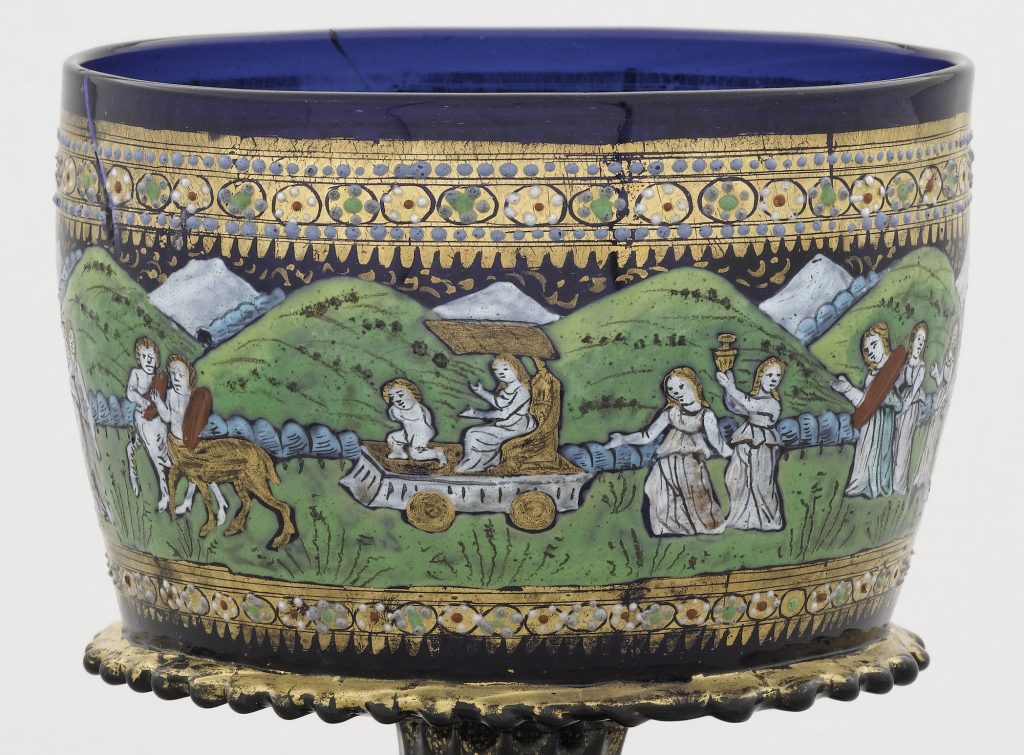 The three curators of this small but very erudite show, were enthusiastic about the research which took ten years and the elaboration of this exhibition. Enameled and gilt glasses invented in Venice in the 15 th century, have intrigued art historians and it is thanks to the new techniques of Aglae, an accelerator of particles from the Centre for research of French museums (C2RMF) located at the Louvre, that the origins of all these glasses have been partly discovered.  “Cristallo”, a very pure glass,  was invented in Murano in the XVth century and soon its technique was exported all over Europe. The gold and enamel decors were added on, and in the XIXth century the fashion was revamped and many pieces fabricated thus leading to misattributions of some pieces. 120 pieces from MAD in Paris, the V&A in London, the Corning Museum of Glass and Museo del Vetro de Murano… were studied and lent for this show. 250 more pieces belonging to the Ecouen museum can be seen in other rooms.

Some of these treasures were made in Venice, others were made elsewhere with the Venice “recipe”, thanks to the diaspora of Venitian glassmakers who travelled throughout the courts of Europe, in Catalgogna, Holland, Tyrol, Germany and Prag. Others were copies made at the time in different materials or later in the 19 th century when collectors start a movement of Renaissance glass lovers which will encourage replicas. Some discoveries were also made during the preparation of this exhibition which concluded to false attributions. 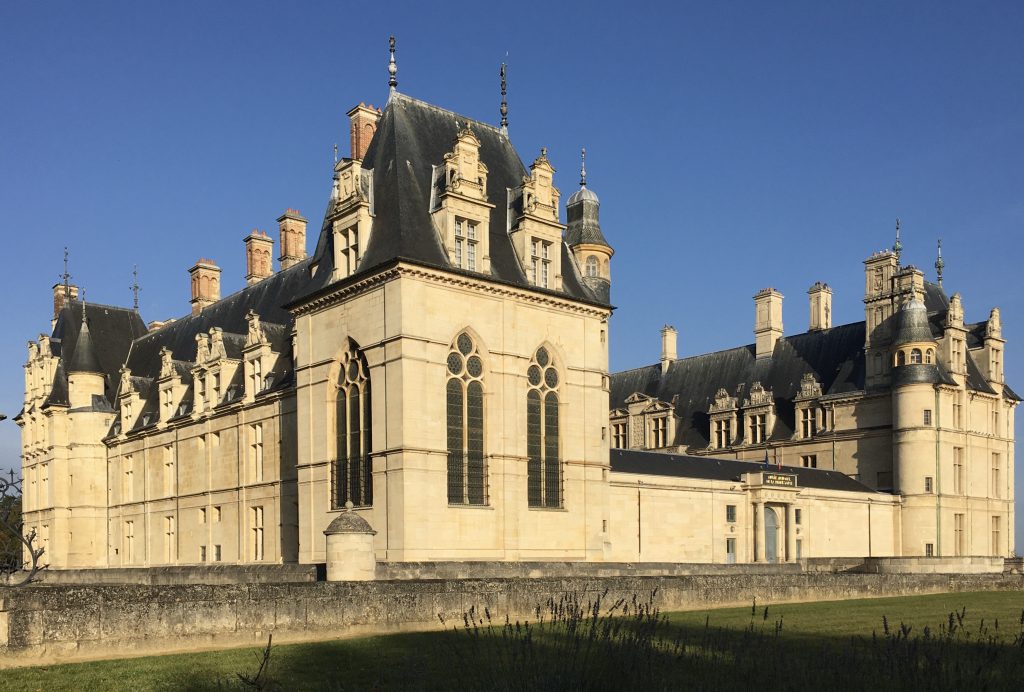 These glasses are very moving because they have survived so many travels and their very fragile condition gives a special dimension to the show. The themes are often religious like the five blue “Gobelets” found recently in the monastery of Santa Chiara in Padova or of animals and nature. There is a large collection of pilgrim’s gourds which did not travel with the pilgrims obviously. It takes its name and shape after the leather or metal gourds used with a rope by travelers and the window showing five of the together is very spectacular. 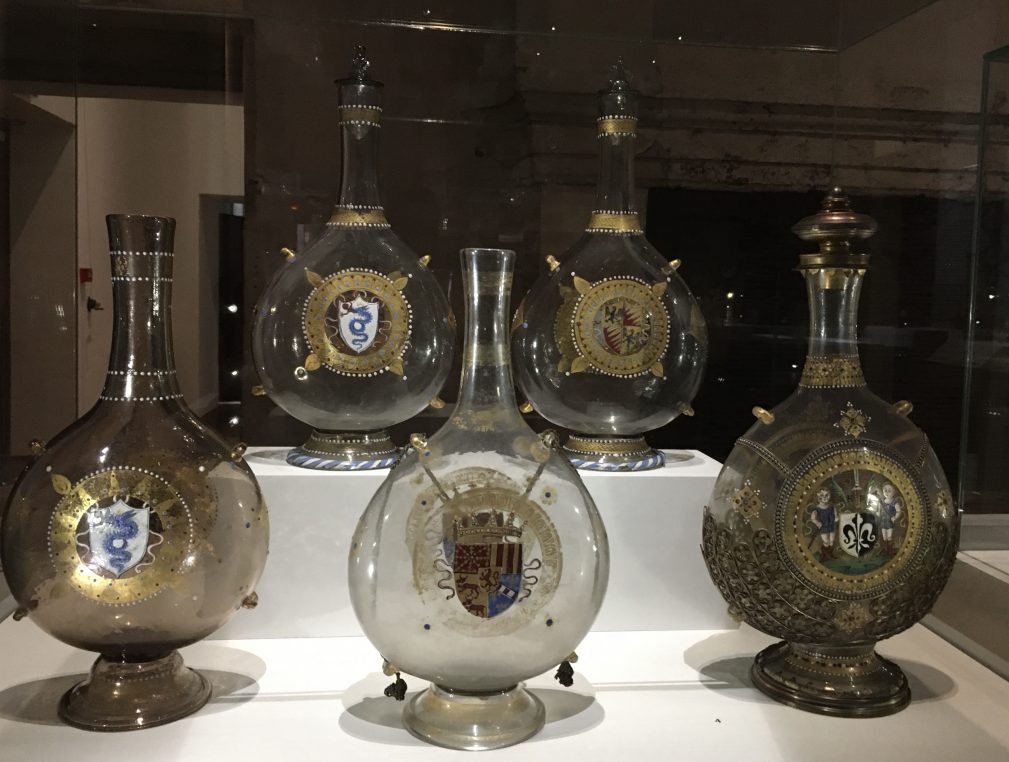 Gourds with the Bentivoglio and Sforza coats of arms

There are many colored glass cups from the collection of Baronne Salomon de Rothschild lent by the Louvre, and a special section on French enameled glass. The catalog includes a fascinating article by Corine Maitre, on the travelling artisans and different workshops all over Italy (mostly Tuscany) and Europe. Sodium and manganese came from Syria, Tunisia or Barcelona and was used all over. Thanks to contracts and bills, the three curators could track the different countries involved in this technique. 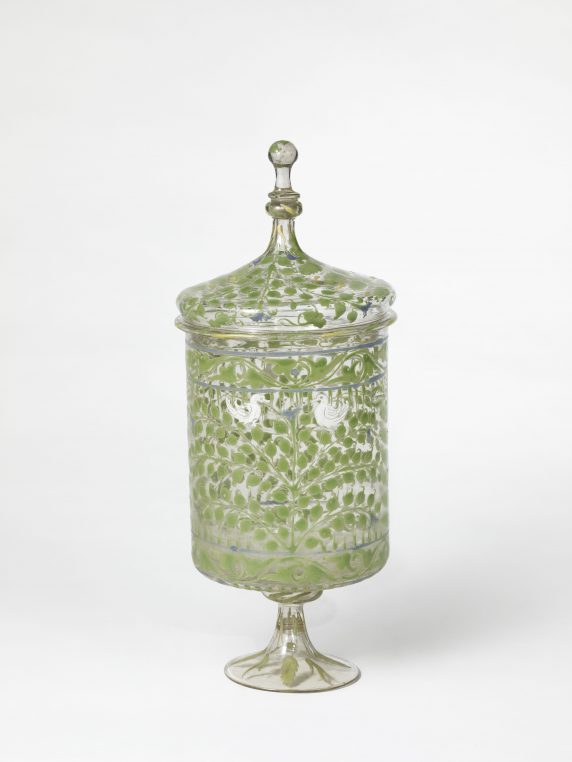 What come out of the show is the great love for enameled glass developed in all the courts of Europe after the 15 th century. Aurélie Gerbier, Françoise Barbe and Isabelle Brion, the scientist of the group, have worked so hard on this show that they should be saluted here. “Emailler le verre à la Renaissance” is at Château d’Ecouen until February 14 and the fascinating catalog can be ordered on line for 35€.