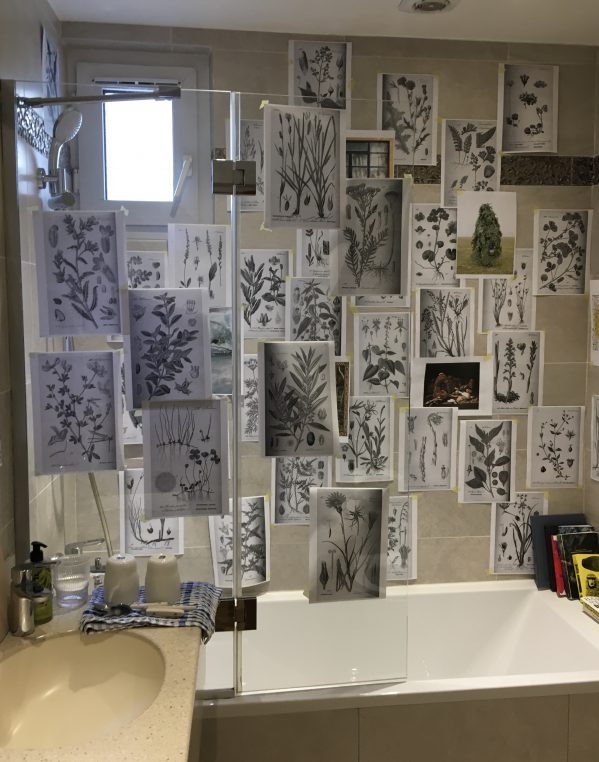 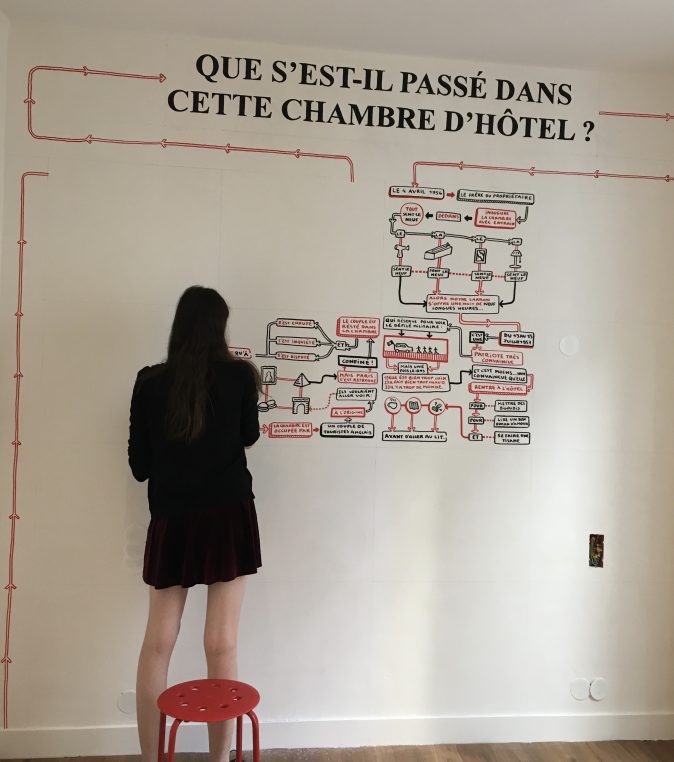 Juliette Green is still a student at the Beaux Arts de Paris. She paints on the walls and questions “what happened in this hotel room before”?

On May 29 and July 3, you will be able to visit the empty hotel on avenue Mac Mahon whose empty premises are dedicated by the Drawing Factory (founded by Christine Phal and the real estate group Soferim) to young artists studios until September. Out of 400 applications, thirty three young men and women from very diverse horizons and nationalities, have been selected and lent a studio (hotel room size with bathroom) to develop their own projects. Some of them already have galleries, others work with videos or movies, some draw on the floor or on the walls, all use drawing as a medium. And going up and down the corridors and the elevator (four floors) is great fun. From 10 to 13 June the Drawing Now art fair will exhibit some of their projects at 42 rue du Faubourg Saint Antoine. Here is a subjective choice of their works. Their energy is fantastic. 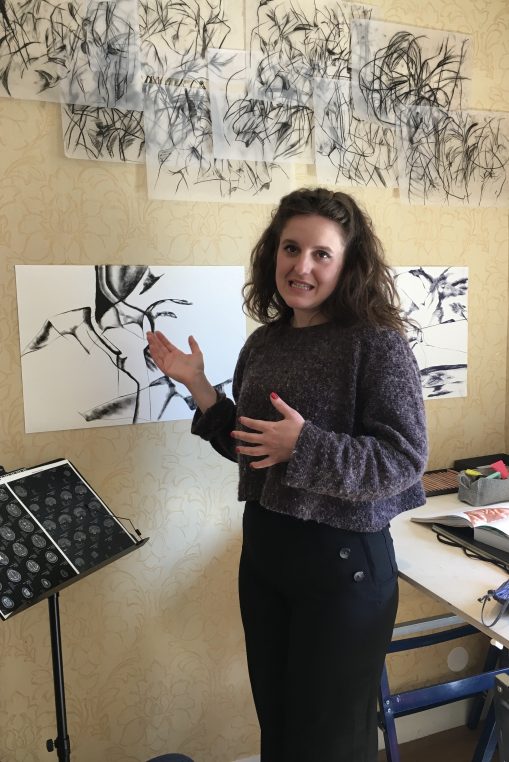 Gabrielle Kourdadzé, is Franco Georgian and plays the piano (or the accordion) in her studio to inspire her drawings which are very dramatic

There were some closed doors in the corridors but when you found one open, it was an enchantment to discover each time, a new style and a new personality. Shy or over confident, in color or in black and white, videos or frescoes, all kinds of drawings are exhibited and they are mostly works in progress. Benjamin Laurent-Aman is very stern and powerful with his black pastels on paper. He creates performances with sound and already has two monographies dedicated to his work. 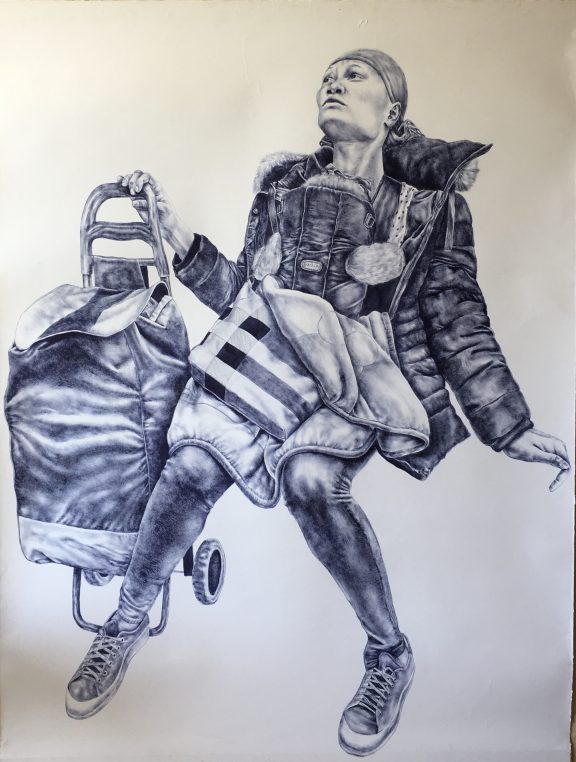 Gabriel Kourdadzé is a fervent pianist and she still studies the piano (as well as accordion) at the Conservatory of the 18 th arrondissement and she finds her models on the street. Her solar personality hides a very strong will for survival and her Georgian family background has given her a passion for music and singing. A project is to go and spend time in Georgia and learn polyphony songs there. Her charm is totally overwhelming as is the strength of her drawings. 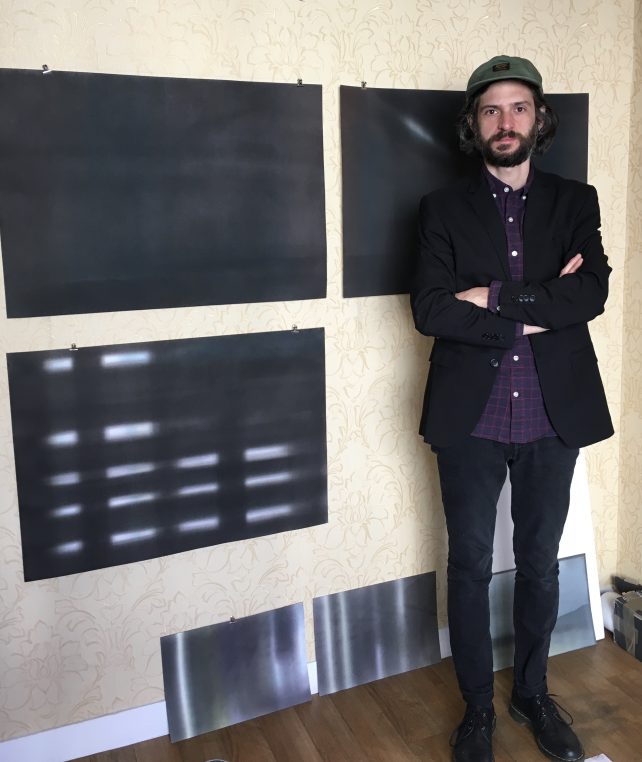 Camille Fischer works on the first floor and creates amazing fabric-like pieces. She trained at the Antwerp Royal Academy in fashion design and at Strasbourg HEAR in jewel designing. She now concentrates on canvases and costumes for her own performances  and is represented by Galerie Maïa Muller. 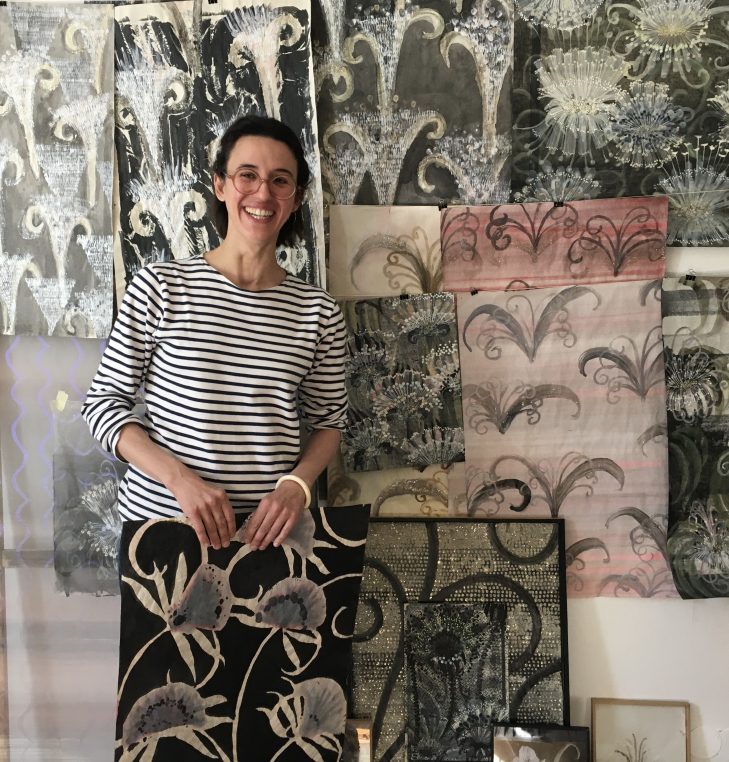 Quentin Spohn uses this studio to draw with pastel sanguine a large black cloth on the floor. This work is part of a big installation with an army of ceramic little satirical statues inspired by James Ensor and Darwin and commissioned by a collector. A graduate of Villa Arson in Nice, he is exhibiting there at the center for contemporary art le narcissio  in October. His works are usually huge frescos and his sense of humor is immediately visible when he talks with his impish look. 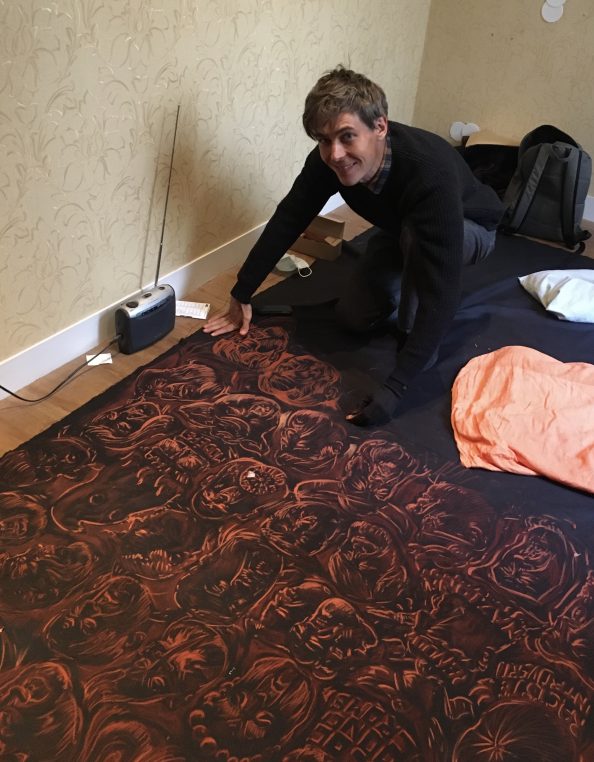 Eléonore Geissler creates magic on her screen. At 28 she is a confirmed video artist and uses fairy tales from Eastern Europe and horror films to convey her dark humor. She was commissioned a film, “Walk with the dragons“, by the City of Paris for the Nuit Blanche in 2020 and her room is full of masks and accessories. The very agile videos can be seen on her website. Her talent is to use sound and music to accompany her drawings and animated images. This is something I noticed among a few of these young artists who use music as an inspiration. 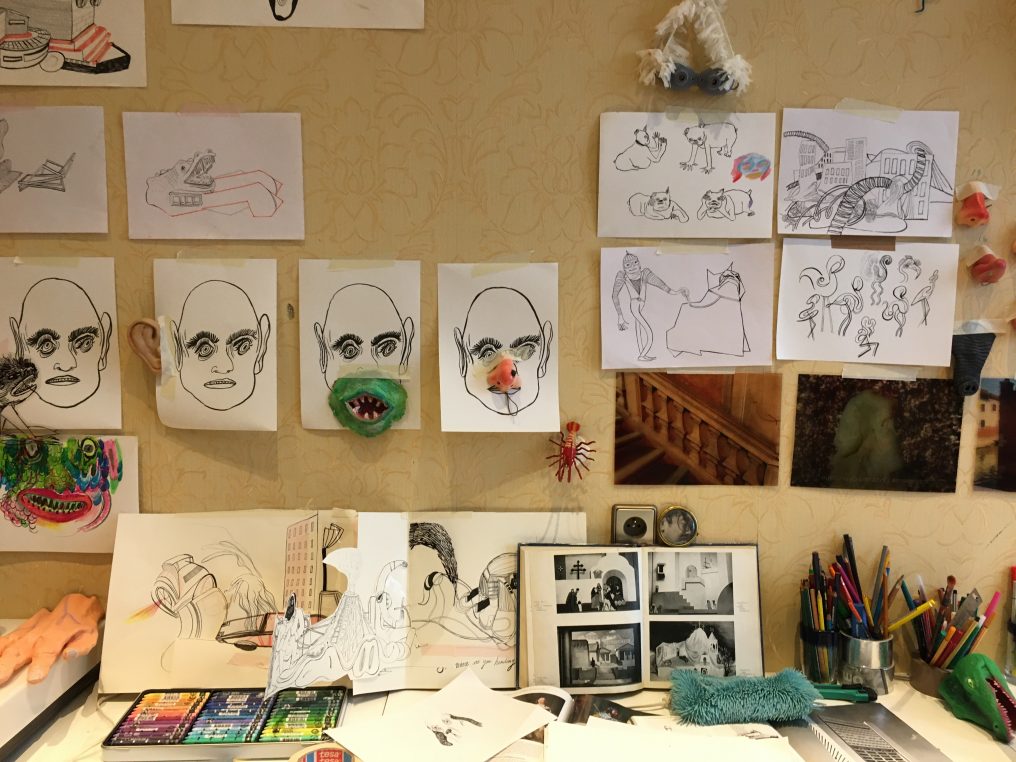 Eléonore Geissler has a room full of accessories

Araks Sahakyan, was born in Armenia  and raised in Spain. She studied at ENSA in Paris-Cergy and draws paper carpets, creates videos and also works with music. She will be part of the Salon de Montrouge this year and will show at galerie Ygrec in Cergy, next October. 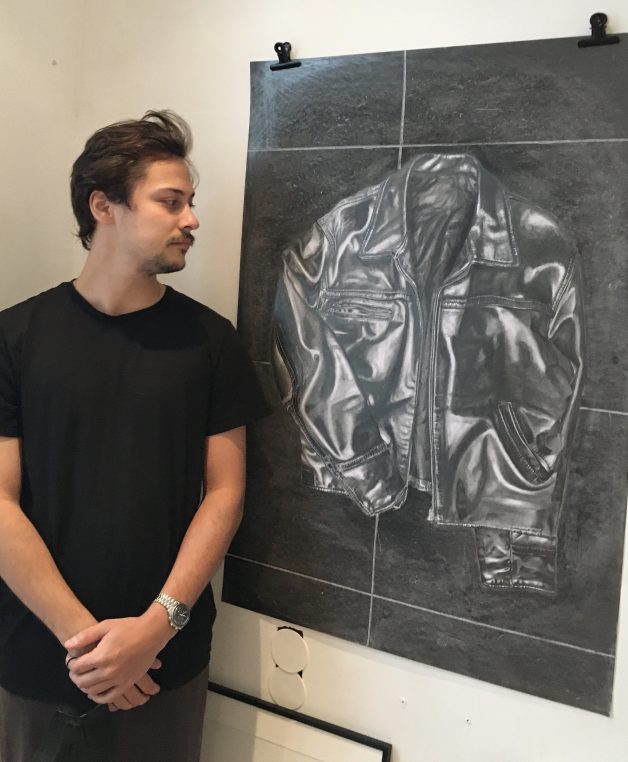 Clovis Rétif concentrates on objects of solitude and has drawn a series of Montreal bathrooms, “the place where you are always alone”. The way he draws stained sockets is fascinating. His training was in architecture and design and he loves urban images. His medium is graphite. In a very different way, Louise Vendel has also used her hotel bathroom to show the dialogue between man and environment with illustrations that inspire her own work.

Maxime Verdier works with chimerical images and studied at Ecole des Beaux Arts with Hélène Delprat. I loved his drawing of Hadal, featuring a blue silhouette lying on a bed. He shows a series of small drawings on his computer while exhibiting a very large one in his room. 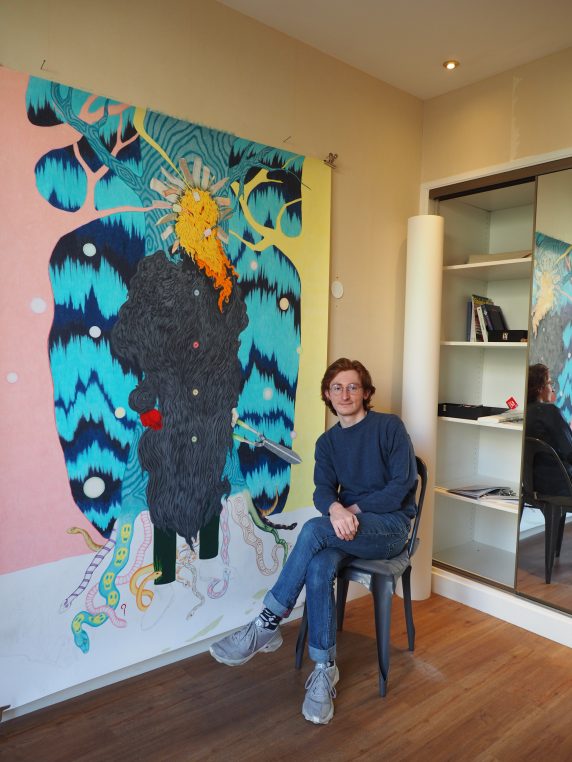 One of my coup de coeur was Mongolian artist Odonchimeg Davaadorj who won the Drawing Now Prize 2021. She will be exhibited at the fair in June with a large fresco and a performance in collaboration with students from the drama school, Cours Florent. Her great sensitivity hides a huge strength which she illustrates with metaphorical lyrical images which include her love for nature. She first left her country at 17, and met her sister who was already living in Prag. She came to France while answering an add for a cleaning lady and settled here. I loved her drawing of the “Volcano woman”. She his represented by the Backlash gallery. 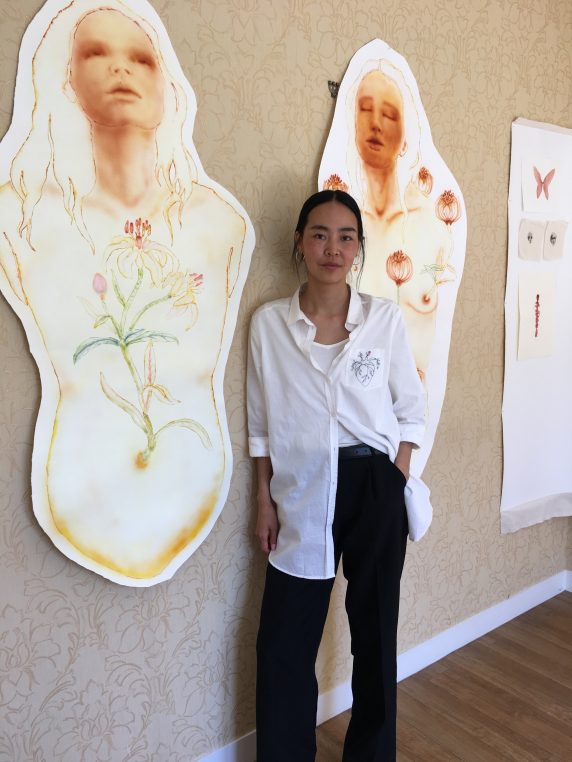 Drawing Now is organized by the same sponsor as the Drawing Factory (with the CNAP) and the Drawing Lab on rue de Richelieu which hosts a boutique hotel. The fair will take place this year from 10 to 13 June at 42 rue du Faubourg Saint Antoine. Make sure to go and discover this mine of new talents. 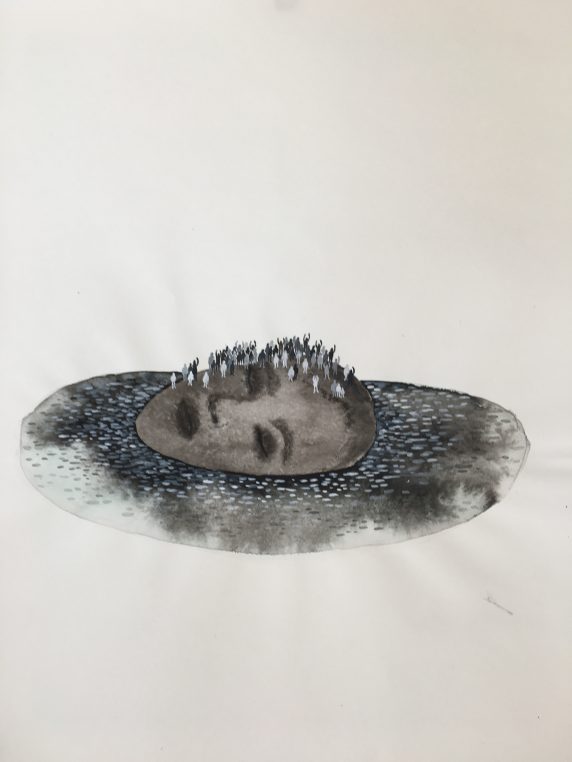 One Comment on “At Drawing Factory, young artists have a ball until September”