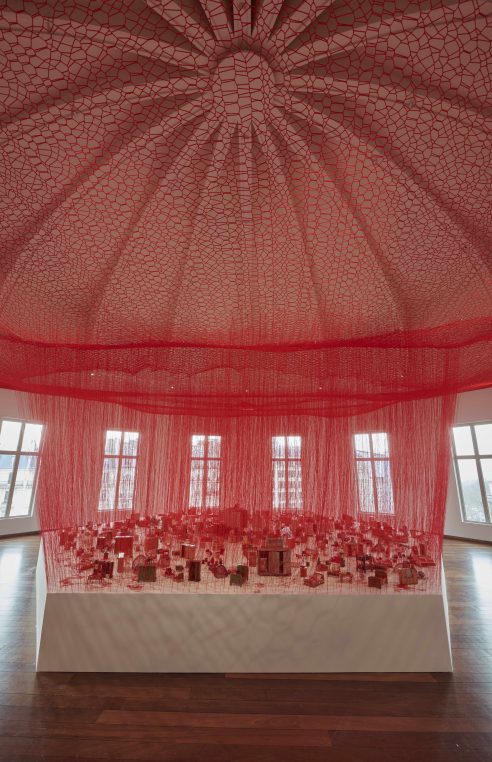 On the top floor of Musée d’Art asiatique, Mnaag, which you access by the elevator and a few more steps, Chiharu Shiota, the Japanese artist, has stretched her red threads across the rotunda. Like many other artists, she has worked during the last two years on the importance of one’s home and the domestic space. Below, in the Japanese galleries and in the library, she shows four more boxes in black and white which make us wander around the rich collections. On the lower floor an exhibit of Sabres illustrated in prints and paintings takes the whole space while Yoga is the theme of the first floor gallery. 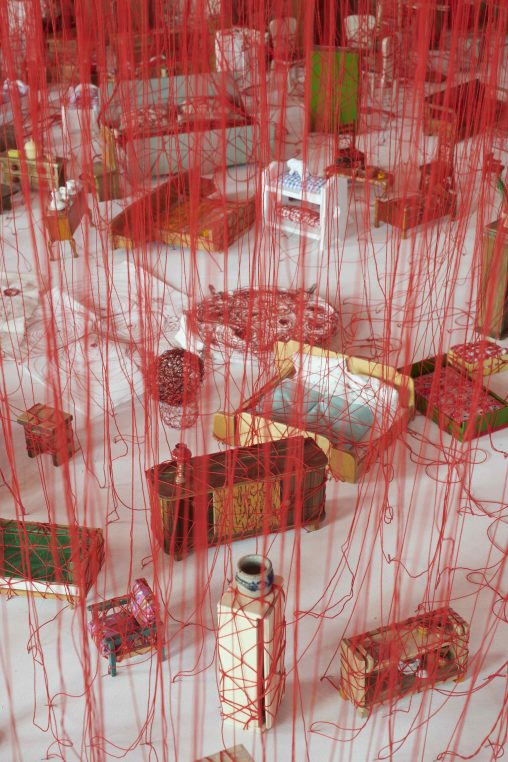 It is always fun to look at the details of Chiharu Shiota’s installations and this time it took her six days with three assistants and Guimet curator Claire Bettinelli, to stretch her threads across the top cupola of the museum. Inside her “tent” lie all sorts of tiny doll furniture and Japanese bottles which are themselves tied and ornated. The threads are stapled to the bottom and then tied around the stoves or little beds with more cages and clever mazes. 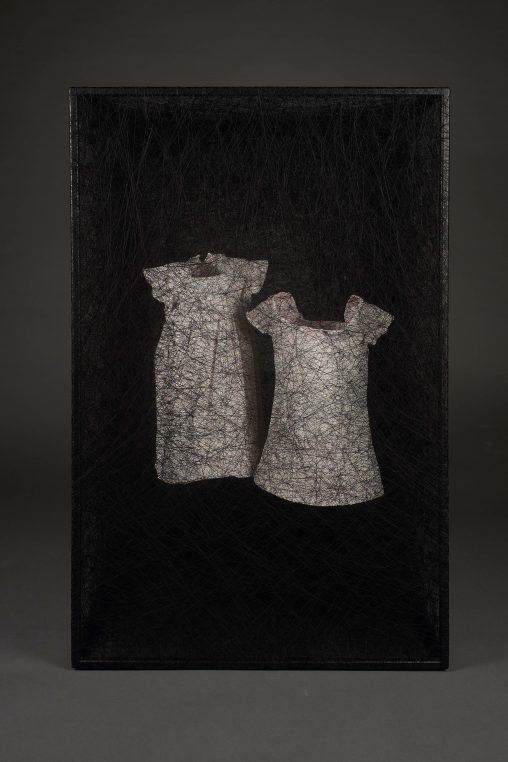 On the second floor, within the Japanese galleries, she exhibits her usual black or white boxes with children clothes or barely visible drawings. It is a lovely reason to wander around the permanent collections of the museum which are unique. While trying to find them I saw an extraordinary costume exhibition lent by the Beijing opera, a tribute to Jacques Pimparneau who had been Jean Dubuffet’s assistant before becoming a Professor of Chinese language, who  died last year. 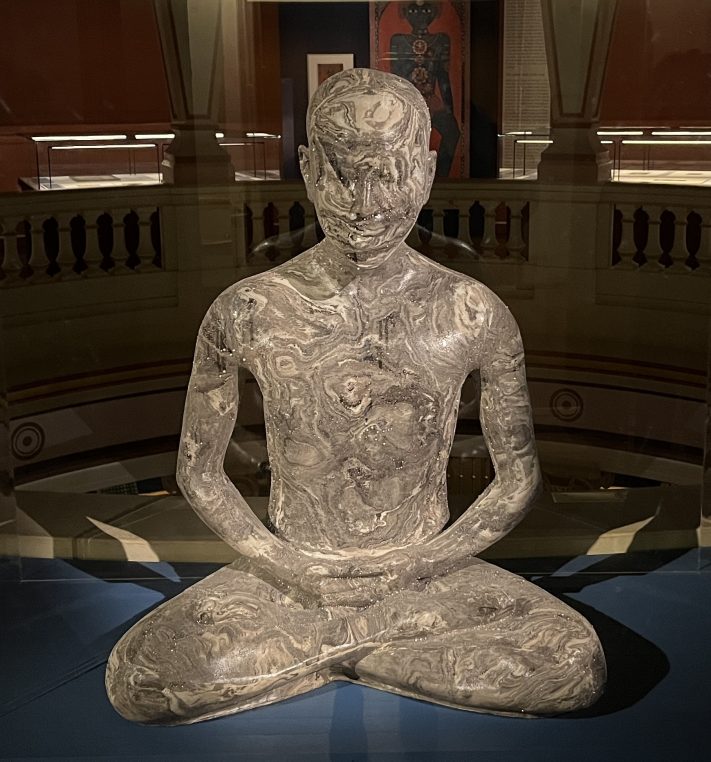 The exhibition on yoga also includes a contemporary work by Takahino Kondo, “Reduction”, a sculpture in ceramics and porcelain, cast on the artist’s body. It is a tribute to the 18 000 victims of the 2011 tsunami in Japan. There are pages from the Ramayana depicting the ascetic Vasishta, a large gouache on paper of an India yogi, from 1800, and diverse interpretations of yoga positions displayed all around the balcony. 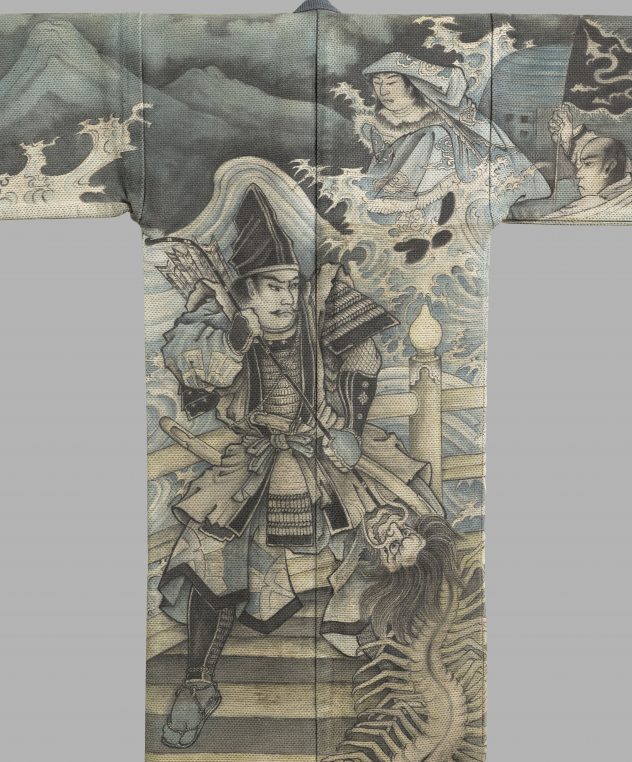 On the bottom floor, arches and sabres are illustrated by many different artists: a few moving colored photographs by Felix Beato, represent Samuraïs from Satsuma, an Edo period fireman’s jacket is so modern that it could be designed by Dolce e Gabbana, and many prints by Hiroshige and Suzuki Harunobu are vivd and amusing. I loved a statue Haniwa in terra-cotta  from 350-550 and many different warriors in colorful attire depicted by Hokusai. Also a Jimbaori, an overcoat in leather scales laced with white silk and lined in white. It was worn by samurais over their armors so as to be recognized on the battle field. 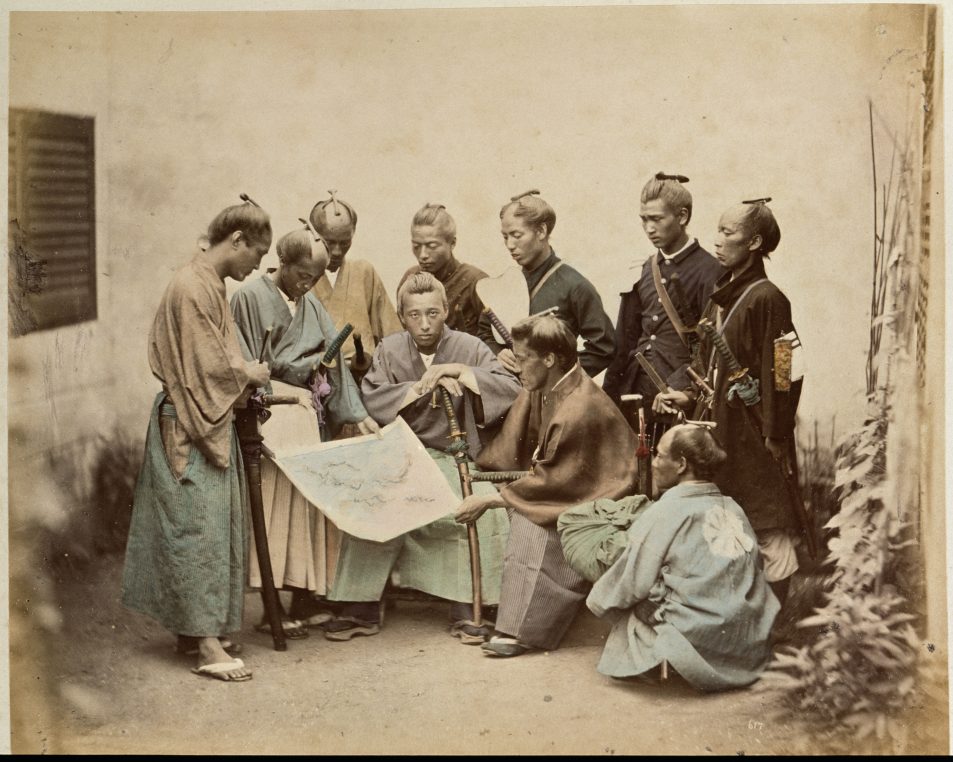 So you can spend a whole afternoon at MNAAG and see such diverse objects that you will feel like having travelled very far.

One Comment on “At Musée Guimet, every floor has a show”