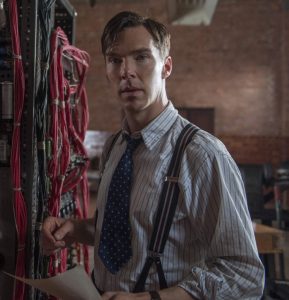 It is rare enough to see two good films in a row for me to mention “the Theory of everything ” with Eddie Redmayne and  “Imitation Game” with Benedict Cumberbatch. You all know the story of pure genius Stephen Hawking by now. How he fell ill at Cambridge and lived already fifty years longer than the doctors had predicted to complete his « Brief history of time ».

Thanks to the acting of his wife Felicity Jones and a last minute surprise lover, the two hour long film is constantly fascinating and a eulogy to university life at Cambridge. The torments of science and love are part of the reason why we are addicted to the characters. Also, watching a film about a great discovery, is an easy short cut to feeling clever without putting in the effort of reading.

The same thing is true of Alan Turing played by Cumberbatch (who had played Stephen Hawking for the BBC in 2004) in « Imitation game ». As an asocial, inverted (as Proust would have called him), inventor of the first computer codes, he fully hits our feelings. His major role in World War II, of decripting the Enigma communication machine set by the Germans, did not save him from anti-gay laws in England. Again, a woman, a brilliant fellow scientist, the beautiful Keira Knightley, enlivens the film and gives us a sense of intimacy. The early death of Alan Turing at 41, has not been solved (a suicide seems less and less plausible) but his treatment with hormones for homosexuality, definitely impaired this major scientist in the mid fifties, just half a century before gay marriage was allowed in major countries. What a waste… 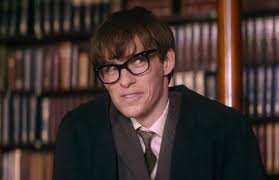 Will Eddie Redmayne win an Oscar?

2 Comments on “From Cambridge to stardom”