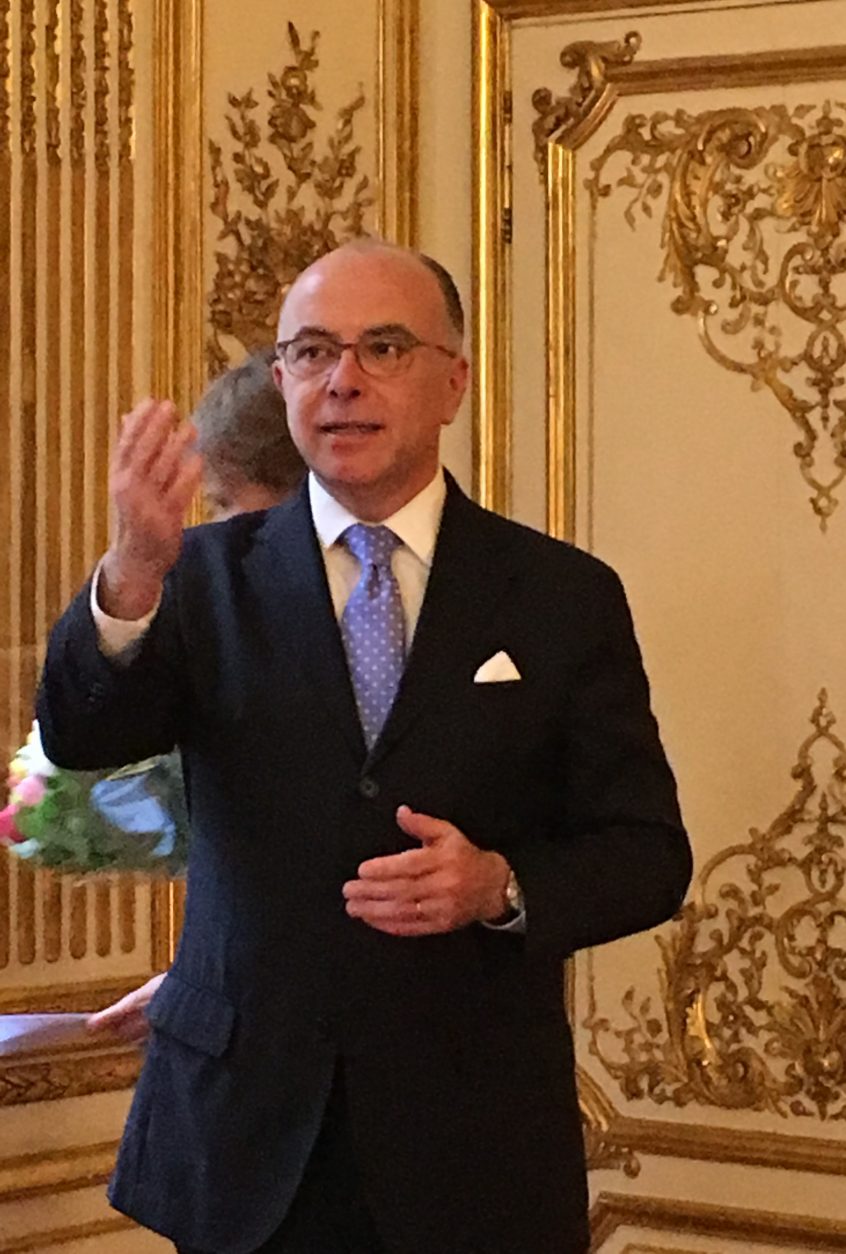 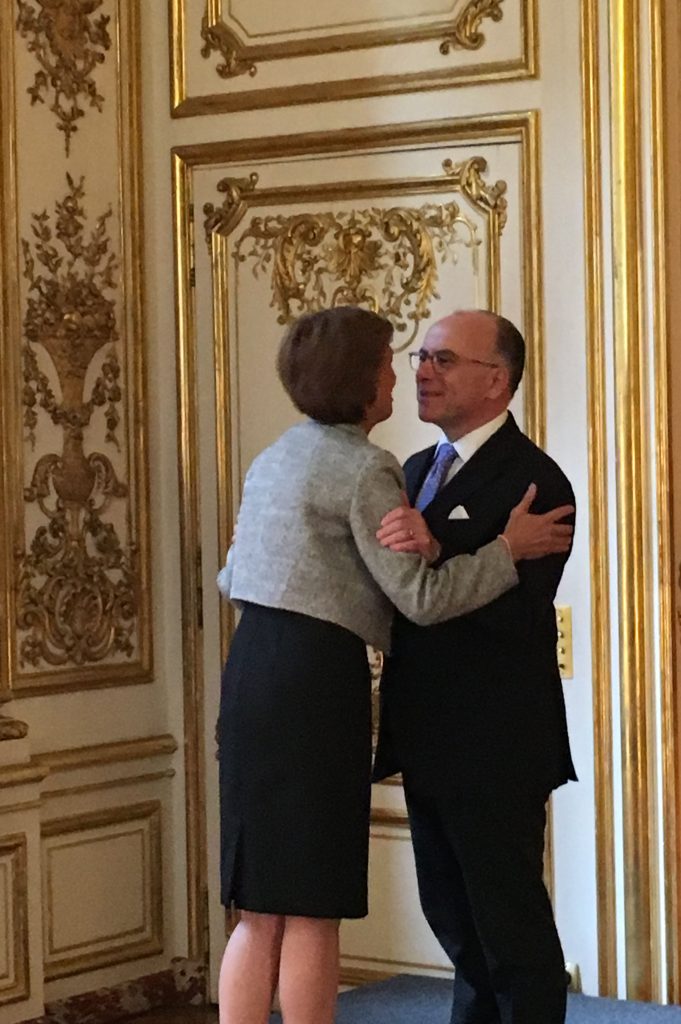 I was excited for weeks in anticipation. My first invitation to Hôtel de Matignon, the  French Prime minister’s office and residence on rue de Varenne, was the most fun official event I have ever been asked to with the Elysées Palace a few years ago. And the occasion was Cécile Pozzo di Borgo being honored by Prime minister Bernard Cazeneuve with the insignia of Officier de la Légion d’honneur after having received the Officier des Arts et des lettres decoration last December. 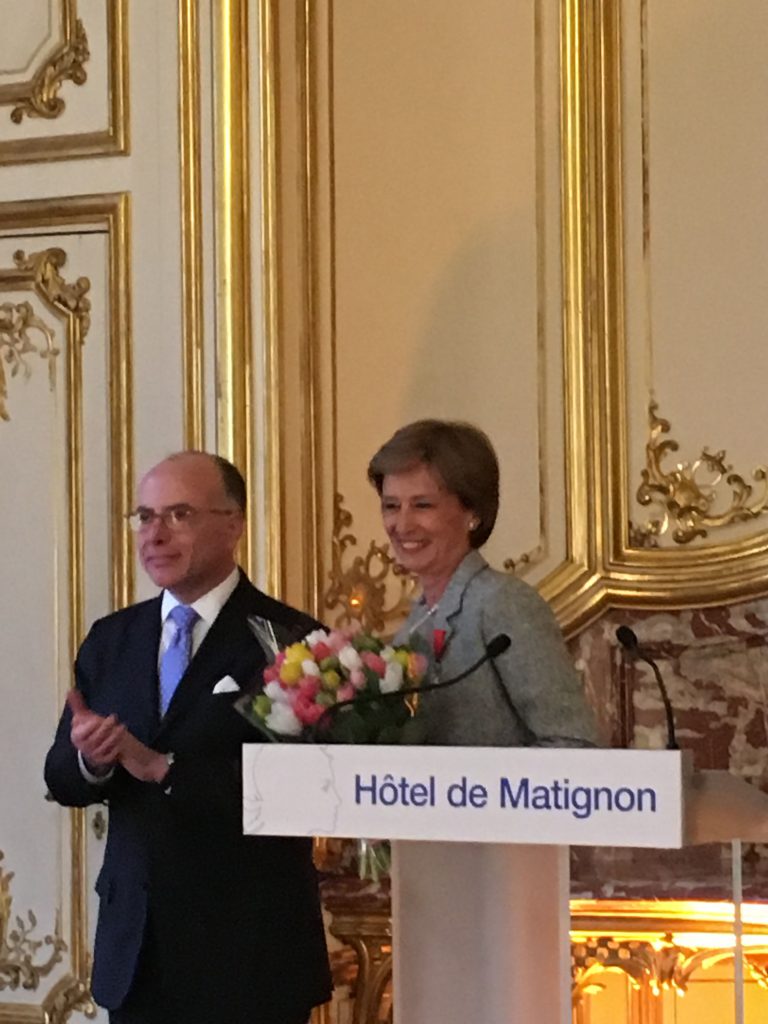 A well deserved decoration for one of our most orginal diplomat turned Préfet six years ago. Cécile was born in a family of 12 children, daughter of a diplomat and herself a laureate of Ecole des Chartes, one of the most demanding literary schools in France, from which she graduated with a degree of archiviste paléographe. The minister reminded us of the greek and latin and Medieval French texts Cécile learnt to read which led her to being an archivist at the Foreign office, the Quai d’Orsay. With three children and a very patient husband, she managed to change careers at 40 when she became a diplomat, then head of communications of the Foreign office under Dominique de Villepin’s reign and ambassador to the Dominican Republic and to Peru. 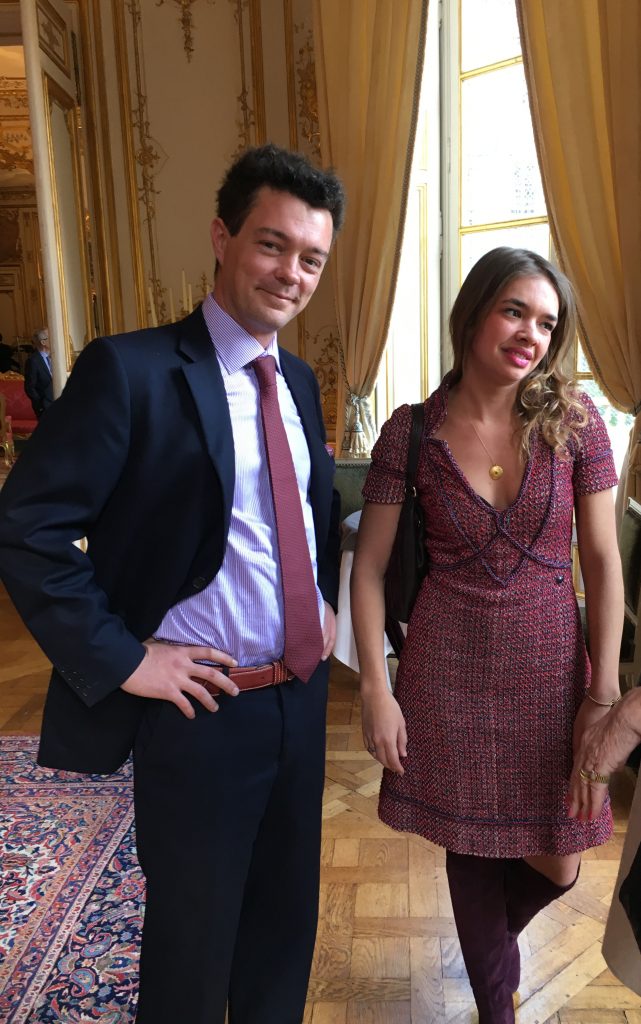 But this was after having served in the cabinet of Secretary of State Alain Vivien, with Bernard Cazeneuve in 1991 ! Thus a long friendship, which the minister recounted in details, stories of their adventures in Ethiopia and Yemen, many “fous rires”, laughters, together. Cazeneuve, the most loved of François Hollande’s ministers,  is incredibly witty and managed to sound official while reminiscing about Cécile’s daughter Marie, who at 8 years old, told him  his hairdo was very funny when « ses cheveux se dressaient tout droit sur sa tête» (his hair rose up straight). “That was when I had hair, he added” ! he is famous for his sense of humour and for this sentence : « I am as tall sitting down as I am standing » and multiplied the jokes during his brilliant speech which he had obviously written himself. 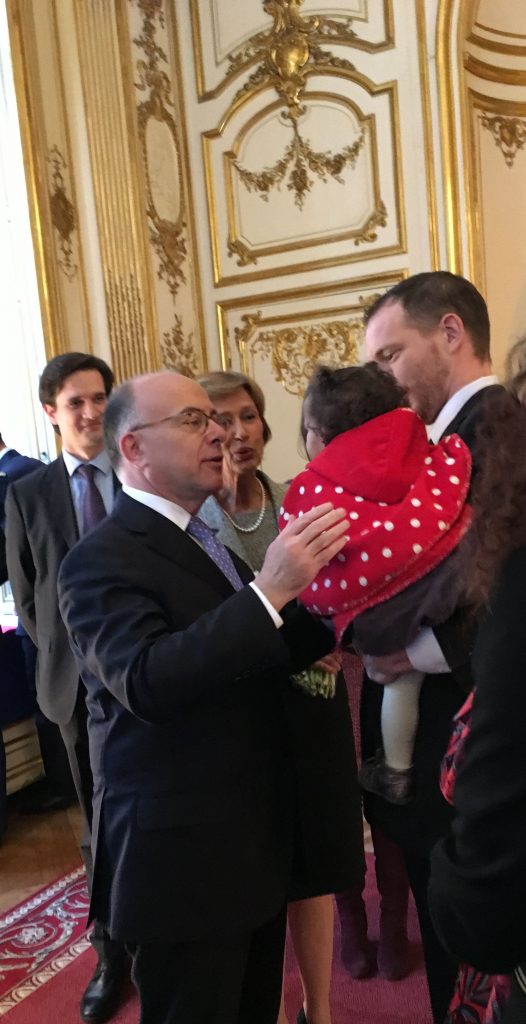 Jérôme Pozzo di Borgo and his brother Antoine holding Anna, who is meeting the Prime minister

Anna, Cécile‘s 19 month old grand daughter, was quite active at the other end of the sitting room and Cazeneuve asked her to come forward and take part in the ceremony. This is when the worried grand mother immediately relaxed. 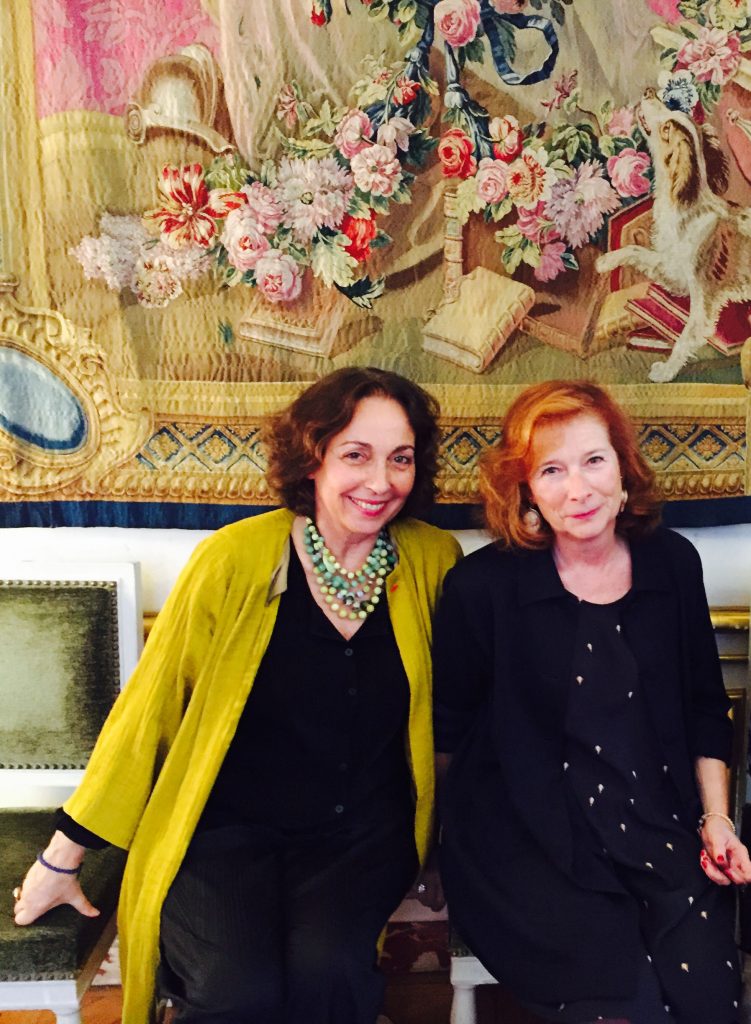 So there was a a feeling of being at a family ceremony on the highest steps of the State and the beautiful day allowed us to wander around the gardens which are huge and unfortunately, have a perfect view of Tour Montparnasse. Traditonnally Prime ministers always plant a tree when they leave the job and Cazeneuve had planted a Magnolia tree on March 22. 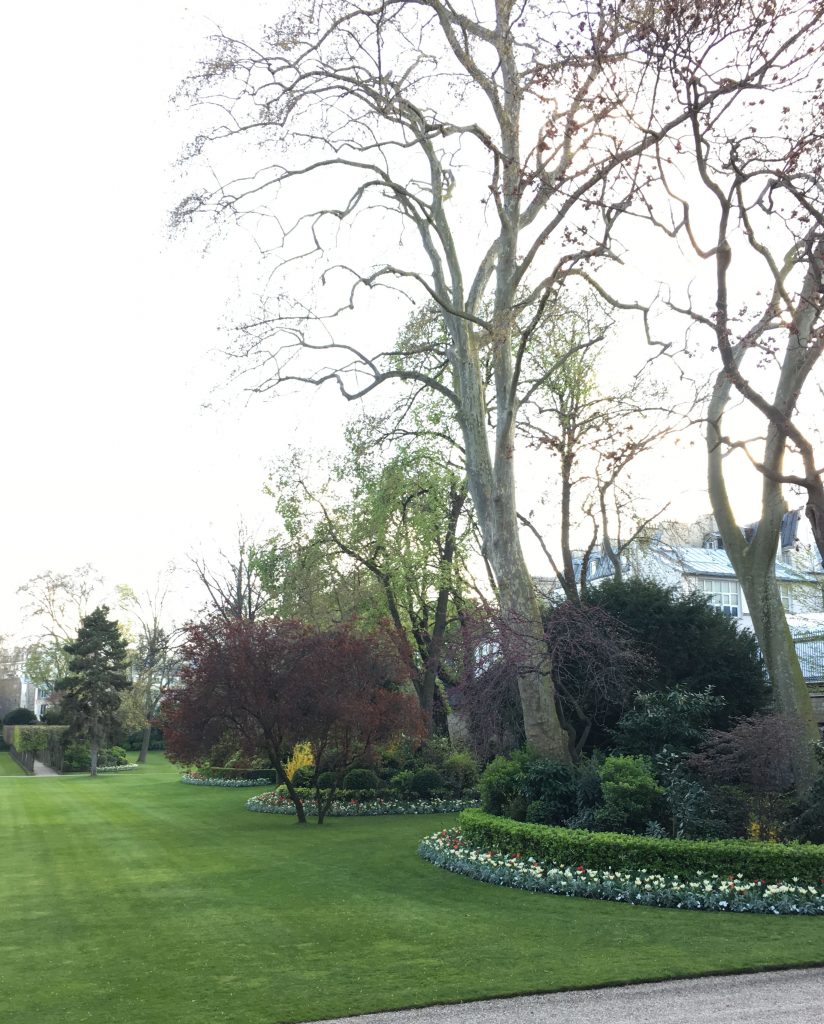 The huge garden goes all the way to rue de Babylone

Cécile responded with a wonderful speech saying how much she believes in the future of France and in the importance of loving one’s country. As a diplomat and  a préfet of Terres Australes and Antarctiques where she administrates a lot of land and seas but no people except for manchots (penguins), she discovered another universe of bumpy sails, hard working scientists and fishermen. She saluted the ambassador from Monaco who was representing Prince Albert, a keen ocean researcher, whom she had spent some time with in Scattered islands recently. Her curiosity has always led her to incredible adventures and her nomination by Bernard Cazeneuve when he was minister of Interior was a struck of genius.

A special champagne for a unique occasion!

She reminded us of  the perseverance a woman of her generation had needed to impose her talents in a men’s world such as the Foreign office and in Aveyron where as a Prefet, she had authority over the gendarmerie and region. Her charm and her brains did the rest and her three children Jérôme, Antoine and Marie were proud to see her on top of French Olympus. 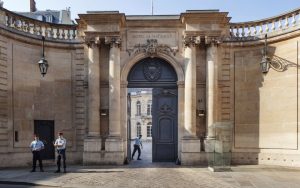 At 57 rue de Varenne, Hotel de Matignon is one of the prettiest in the 7 th arrondissement

I rushed to taste the Champagne de Matignon and delicious hors d’oeuvre. The gilt and beauty of this 18 th century house with its red, blue and green salons, their white and gold boiseries and Gobelins tapestries, was a perfect frame to confront the next weeks in our disheveled country.