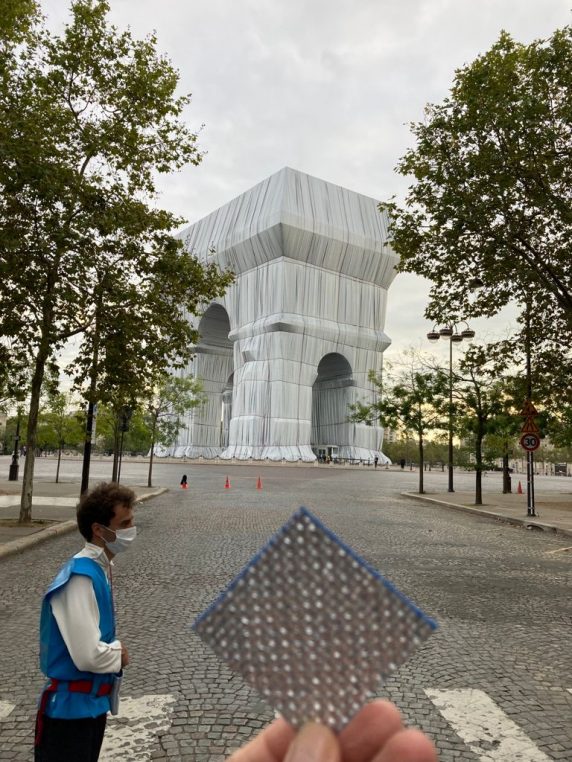 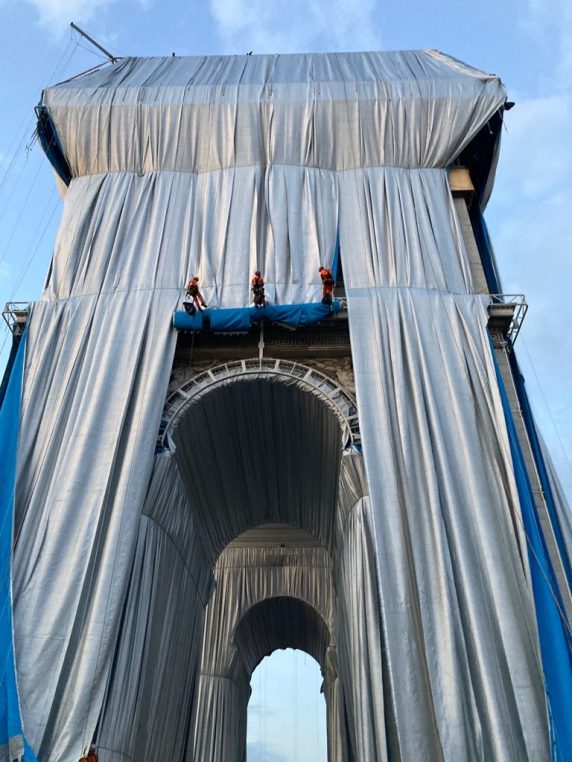 As the young Bulgarian architect Iva Stanisheva (who works as a mediator on the project) was telling me: “some people don’t understand the project, others love it, but no-one is indifferent”. She explained why some of the red ropes were not perfectly aligned “they are fixed with strong hooks on the structure of the Arc and respect the underlying sculptures”. Her English was perfect and you could see that working for her compatriot Christo‘s last chef d’oeuvre was a unique experience for her. Like her, 350 young art students were involved in explaining to the crowds of visitors how this extraordinary engineering project was achieved. The President of Centre des Monuments Naitonaux, Philippe Bélaval, whom I met by chance on the top terrace, was being filmed and obviously enjoyed the moment very much. He was, as always, impeccably dressed. The good news is that you don’t need to book a ticket to access the Arc itself. You only need one to go up to the terrace and if you do so, ask for the elevator, otherwise it’s 21 floors by foot. The bad news is that all the cotton bags and posters printed with the project were already sold out after the week end… Let’s hope there are more to come? 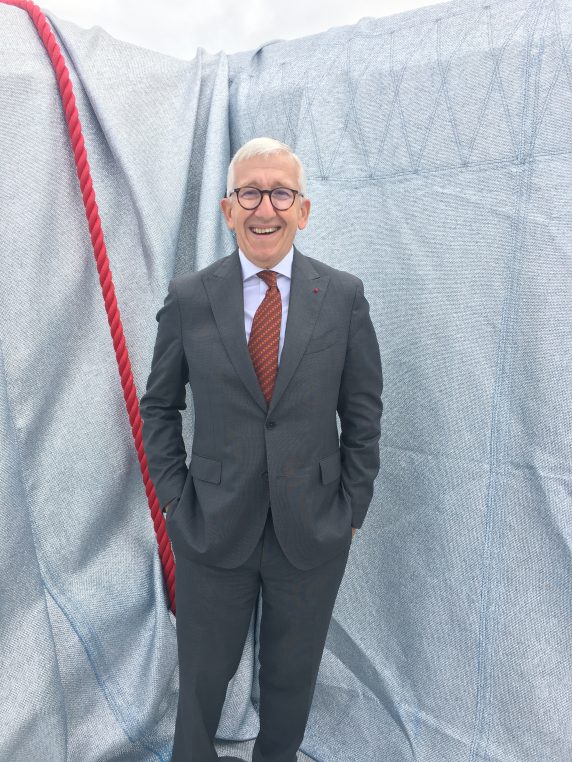 We were welcomed at the bottom of the Arc by the charming and beautiful Jeannine, who usually runs the ticket booth and taken up in the elevator by another delightful young man. Walking into the premises, means going through a security and health check point at the top of the Champs Elysées but it is all very smooth thanks to the great number of enthusiastic young people who are there to explain and help. There is nothing that rivals human contact on a cultural site. And it si extremely well organized here. 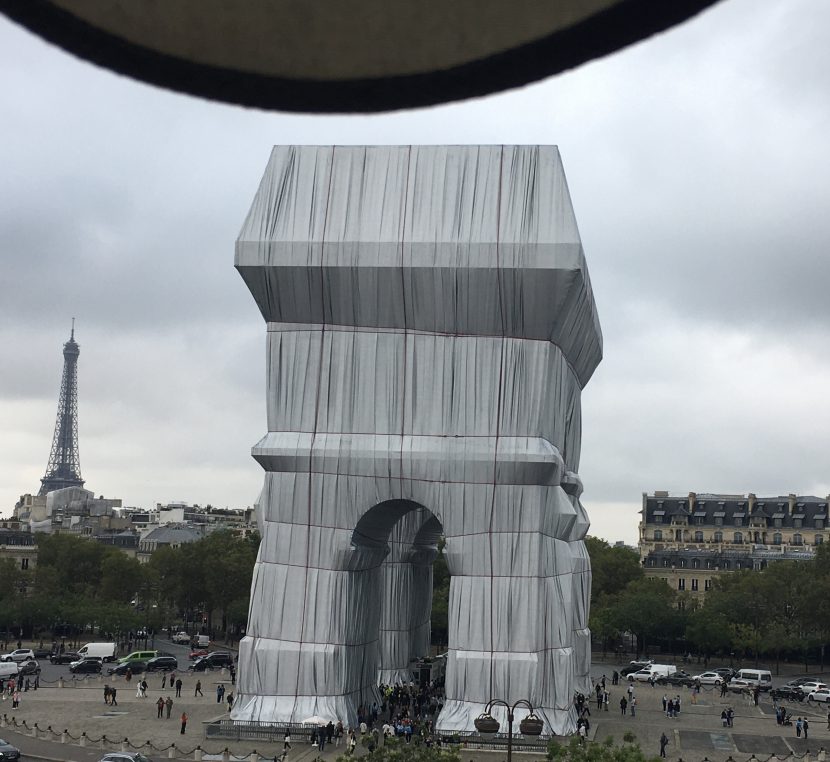 The view from Financière Tiepolo includes the Eiffel tower

The project started in 1961-62 by Christo and his wife Jeanne Claude, will be visible until October 3 when it starts being unwrapped.  25 000 square meters of polypropylène fabric in silver lined in blue, 3 000 meters of red rope, 312 tons of steel were used for the artwork. There are 350 mediators who are there to explain the process and distribute little swatches of fabric. 150 workmen have climbed and unwrapped the fabric around the monument over the last two weeks. 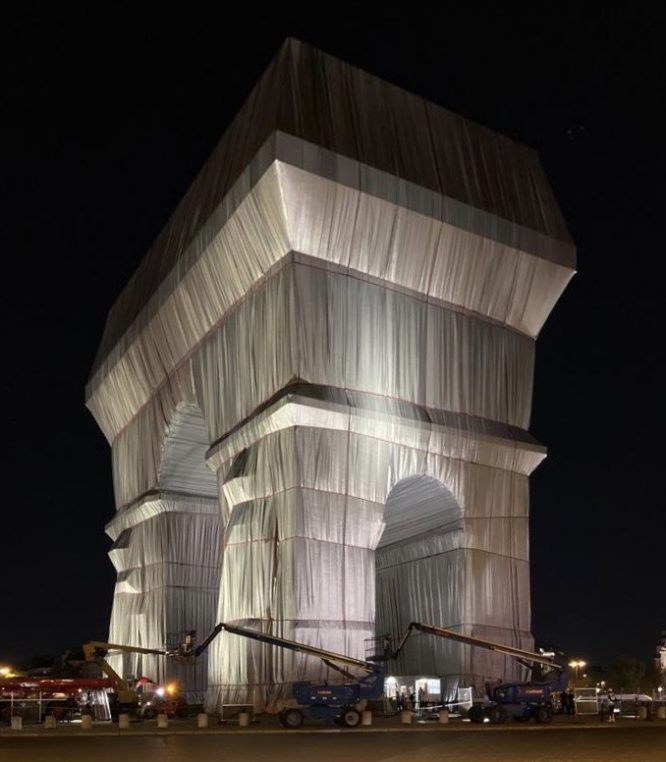 On Monday morning, there were many groups of very young children who had been brought including one from Ecole Etienne Dolet in the 20 th arrondissement. The atmosphere was very jolly with many foreigners enjoying the elevator ride and the extraordinary view over old and modern Paris. Renzo Piano’s Tribunal de Paris seemed very slim at a distance, and so did Montmartre. But la Défense was pretty impressive. 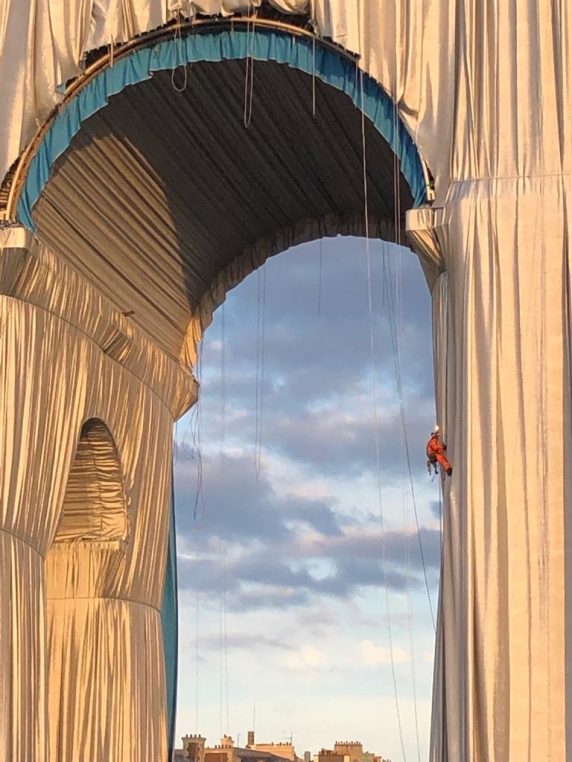 At sunset, the Arc is most beautiful, photo Christian de Pange

Walking on top of the Arc with the red rope as a guideline to the monuments of Paris was great fun. And you could see the details of the wrapping, how difficult it has been to keep the fabric neat and tidy. 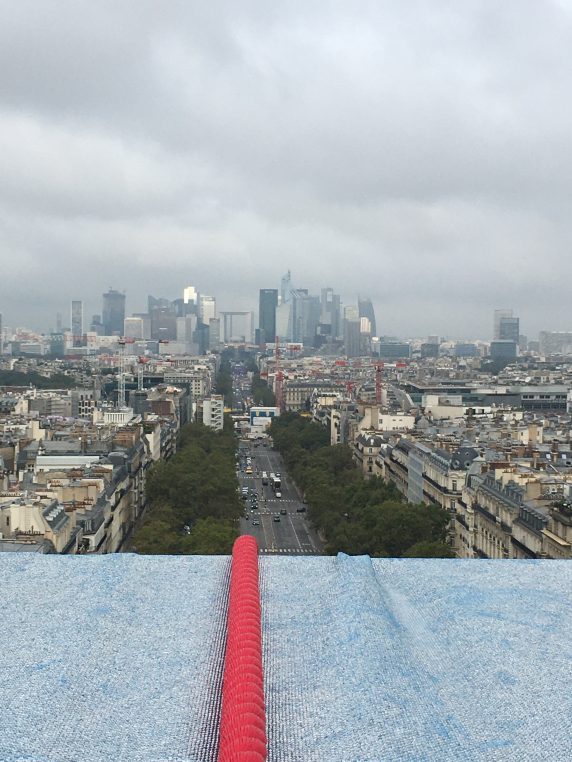 One could not refrain from being moved by the tomb of the unknown soldier which had never seen so many visitors. There were a few flower arrangements including some by British associations with manuscript cards. I ended my tour of the Christo project at the offices of Financière Tiepolo who seem to have the best view of the project from rue de Tilsitt with the Eiffel Tower in the back. 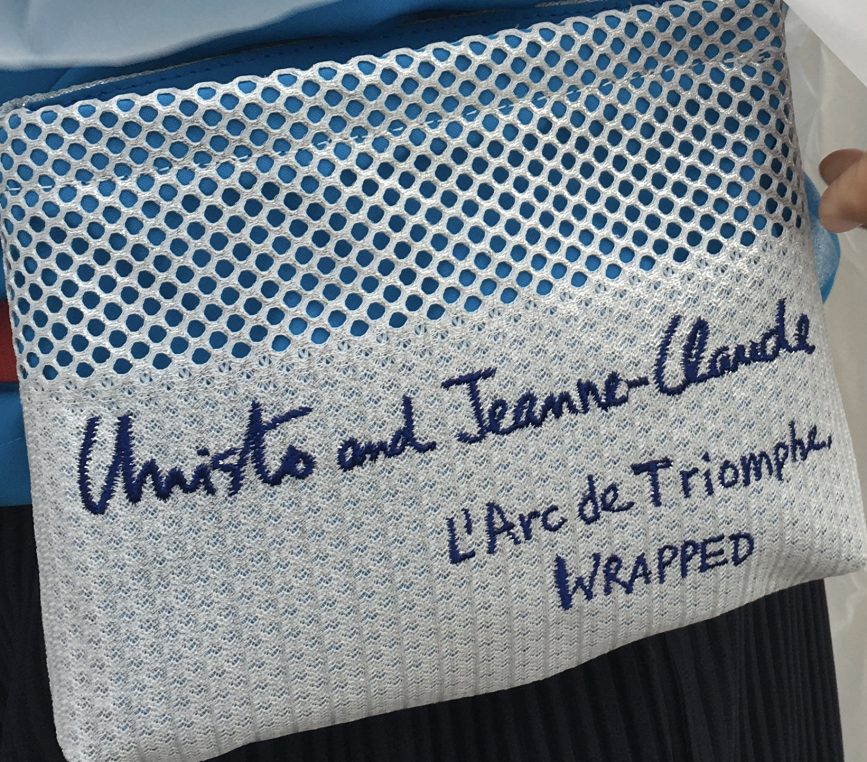 All the details were brilliantly planned by the team composed of Christo’s nephew Vladimir Yavachev and Laure Martin with all the faithful friends of the artist like photographer Wolfgang Volz. 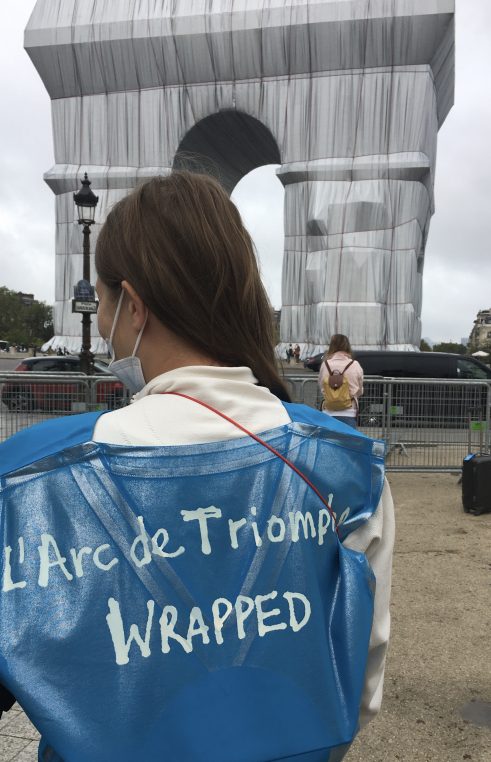 There is an online sale taking place at Sotheby’s right now and an exhibition of Christo and Jeanne Claude at Galeria Guillermo de Osma in Madrid until October 15. It is the first one since 2009 in Spain. Rare drawings from the early years 1960-1970 are available for sale and a catalog is published with a text by Laure Martin.

6 Comments on “Christo makes everyone smile at Arc de Triomphe”