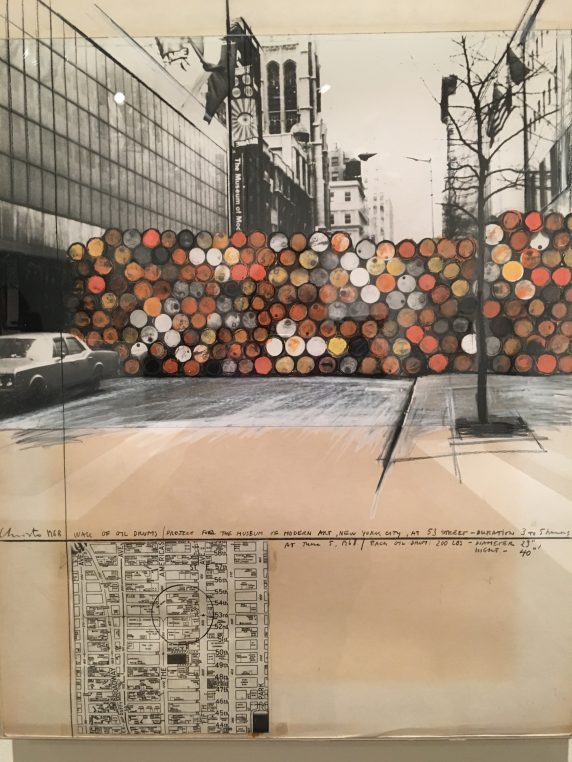 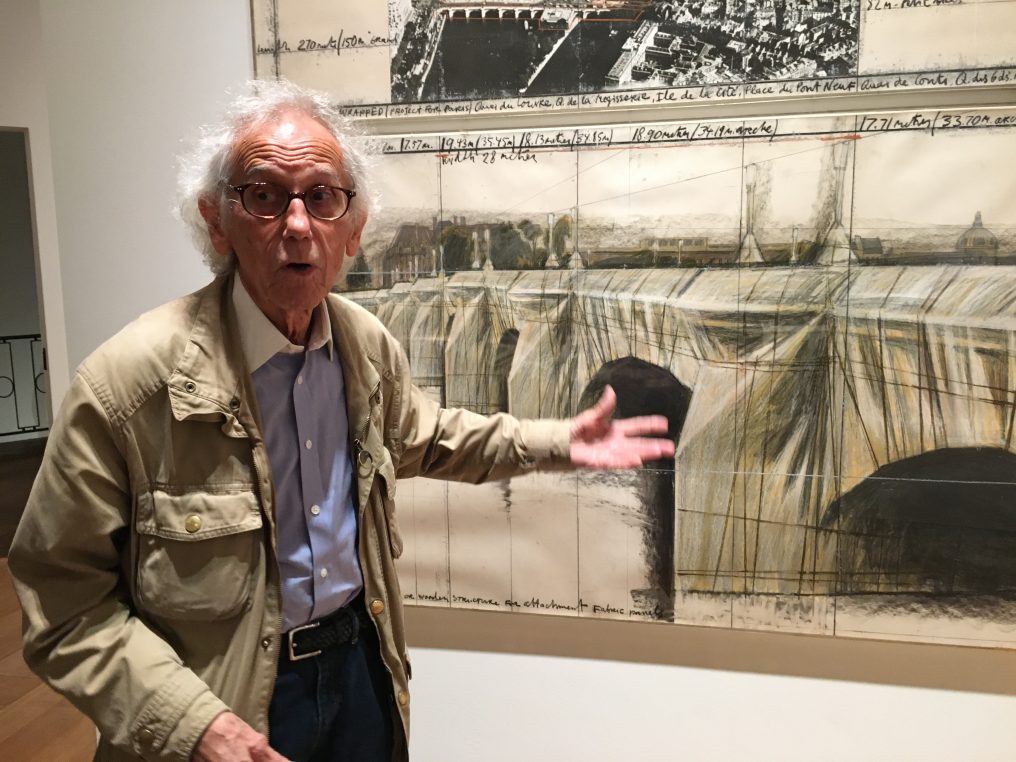 It was definitely worth going to Brussels especially for the opening of the exhibition, « Christo and Jeanne Claude, Urban Projects » at ING Art Center, on Place Royale. Only lenders were invited to this preview of 😯 drawings and models by one of the most original American artists, who finances each project with the sale of his preparatory drawings. The idea came from Laure Martin-Poulet, the curator of the show with Patricia De Peuter, and everyone seemed very moved to go back to the 1960’s in New York and in Kassel. Including the artist himself. 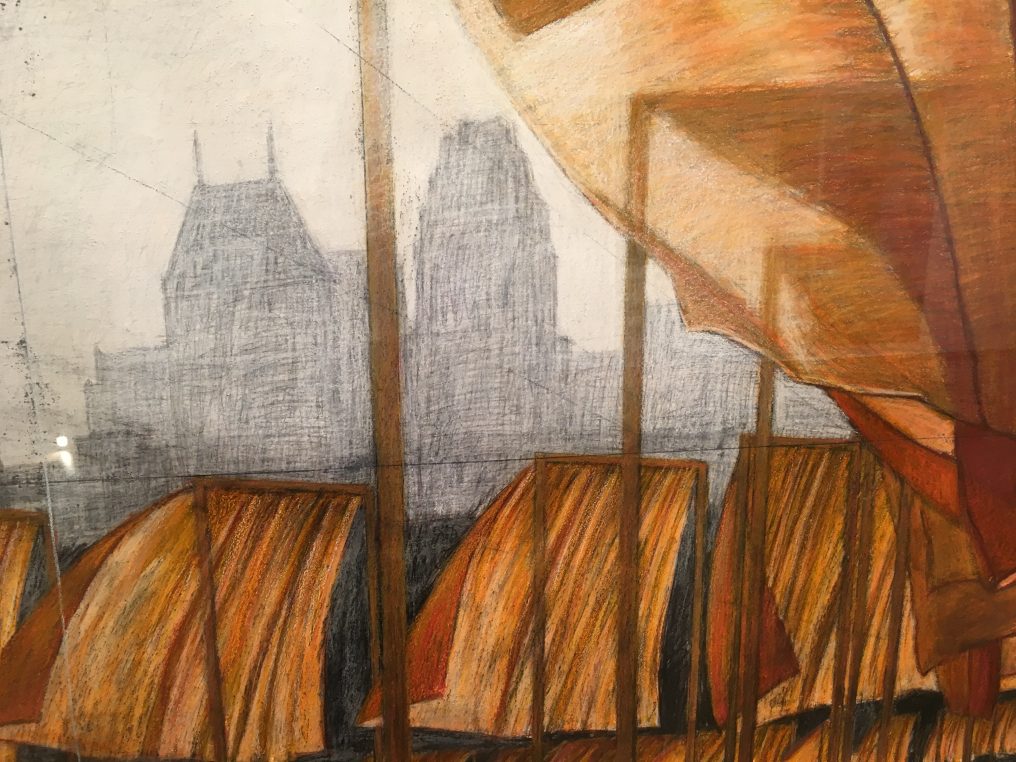 Patrice de Laage who met him in New York in the early 60’s when he was a young ophtalmologist, admitted to not having missed any of his early installations in America. Dottore Claudia Consolandi remembered when her father bought the wrapped « Monument to Vittorio Emmanuele on Piazza del duomo in Milan » which had to be taken down after five days for political reasons. 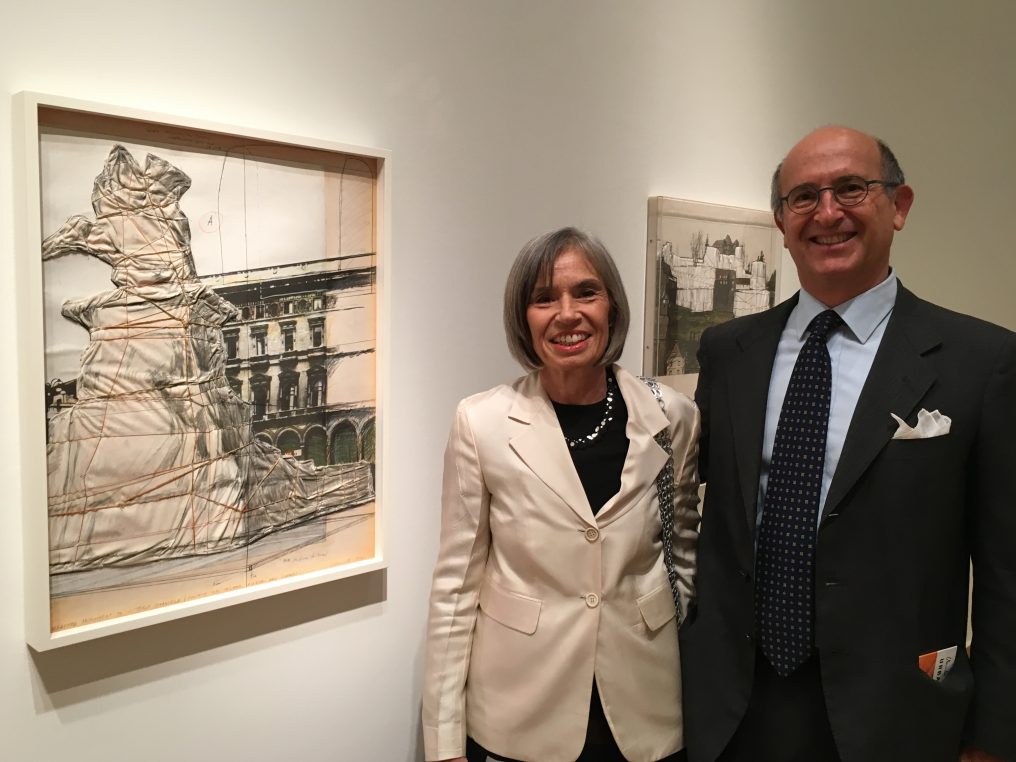 Aleth Chevrillon recounted being a young architecture student working with Christo on the Pont Neuf project just like Laure Martin-Poulet, the curator of this magnificent show, who worked with Christo for thirty years. She had invited me last year to Lake Iseo’s Christo project, and walking on the water of this lake in Northern Italy was an experience I will never forget ! 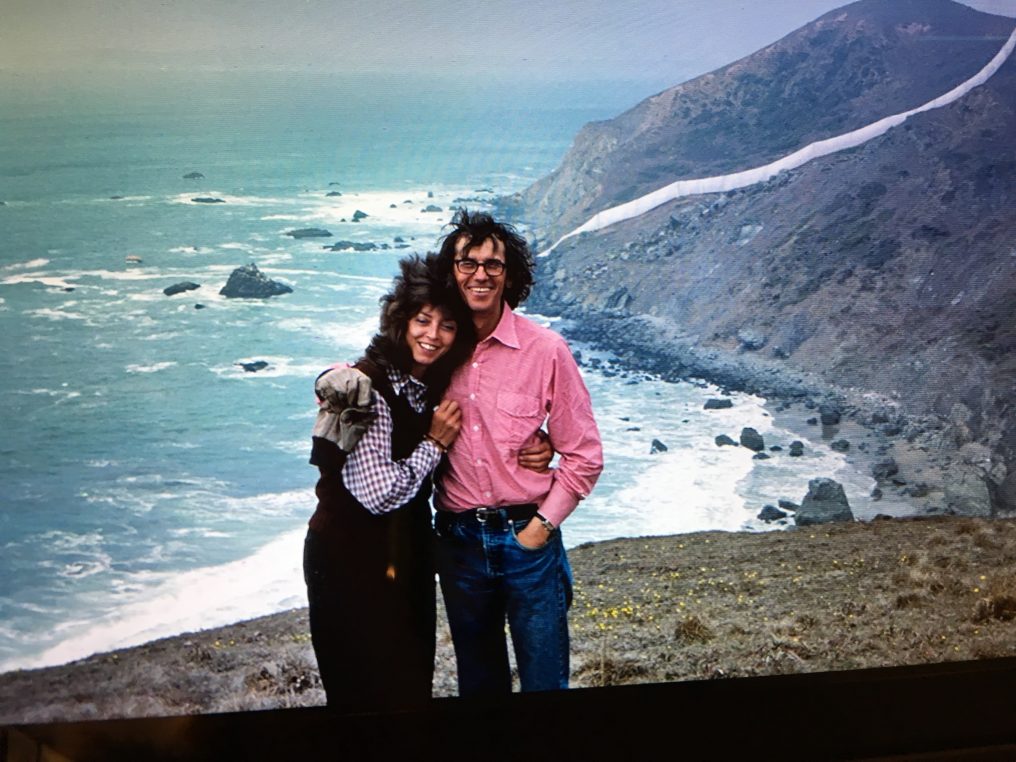 The emotion was intense when we discovered the first drawings from 1967 and 1968. The wrapped air column for Kassel’s Documenta 1968 and The wall of oil drums for Museum of Modern art in New York are fascinating just as the Whitney Museum scale model made in 1967. 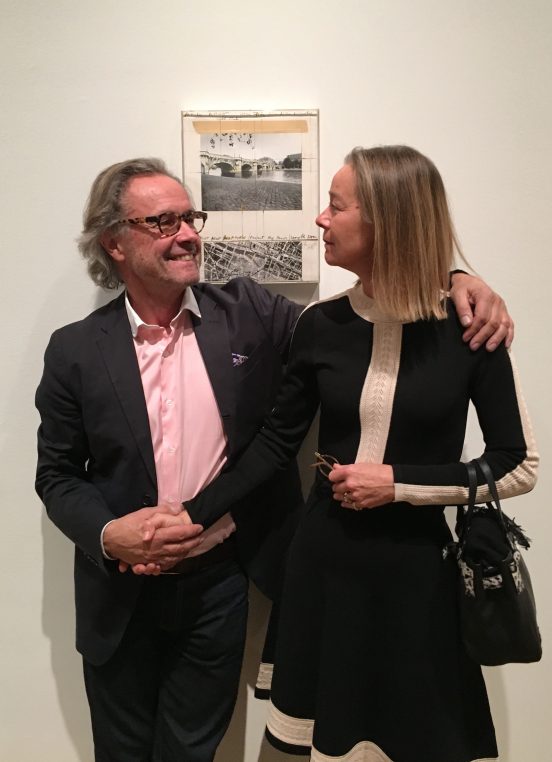 I loved the « Teatro Nuovo packed » (project for the Festival of Two Worlds in Spoleto Italy), a 1968 collage, but was intrigued by the word packed (empaquetage in French) when Christo usually uses wrapped and emballage. The explanation came from his old friend and unique photographer, Wolfgang Volz, who said that, at the beginning in New York, Christo’s English was not good enough to call it the right word! His photographs are shown downstairs on a diaporama and they are extraordinary! 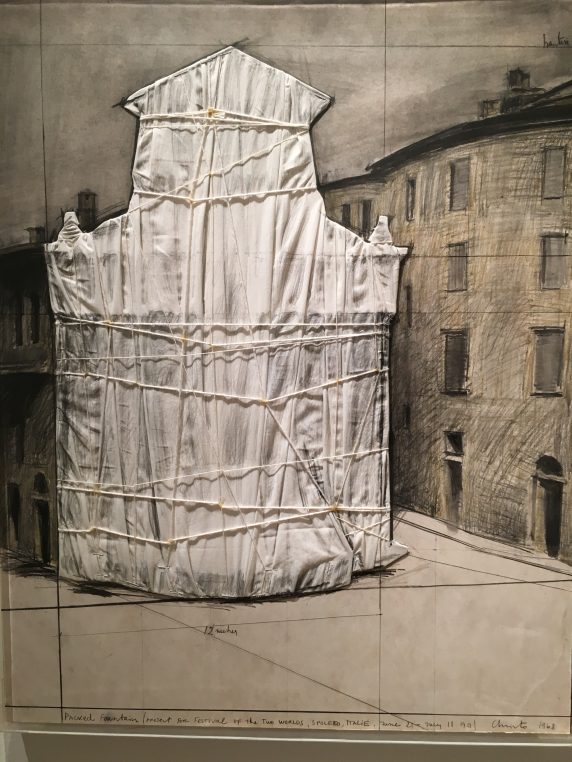 The show was designed in 8 different rooms each one with a theme and the Pont Neuf project realised in 1989, with its huge model never shown before, was definitely the most dramatic of all. His old accomplice and curator of his works, Josy Kraft was there constantly during the “accrochage” and said this was the best Christo show he had ever seen. The next morning, Queen Mathilde of Belgium came to visit the show and she loved it. 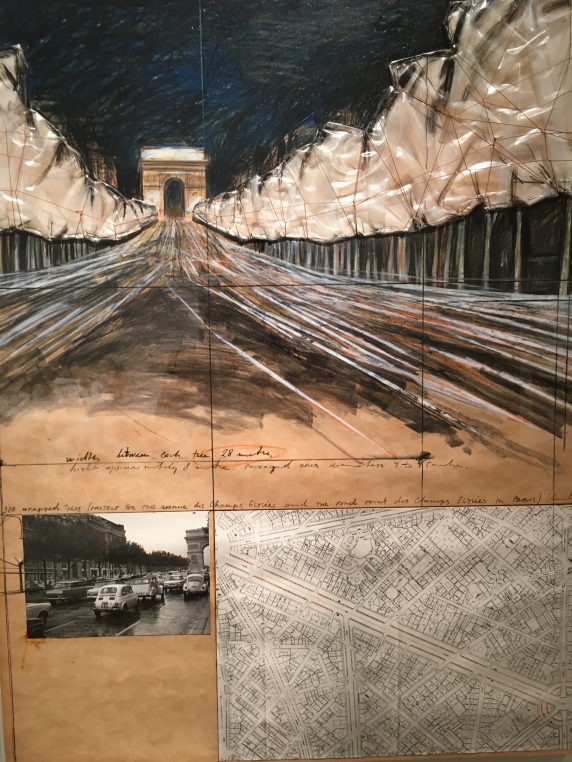 The Reichstag works occupied another large room with a sublime drawing at night with dark blue sky. They are the object of a German foundation which has acquired 80 preparatory drawings permanently exhibited on the second floor of the building in Berlin. Sina Jentzsch who runs the Reichstag foundation was particularly proud of Christo’s enthusiasm for this project. 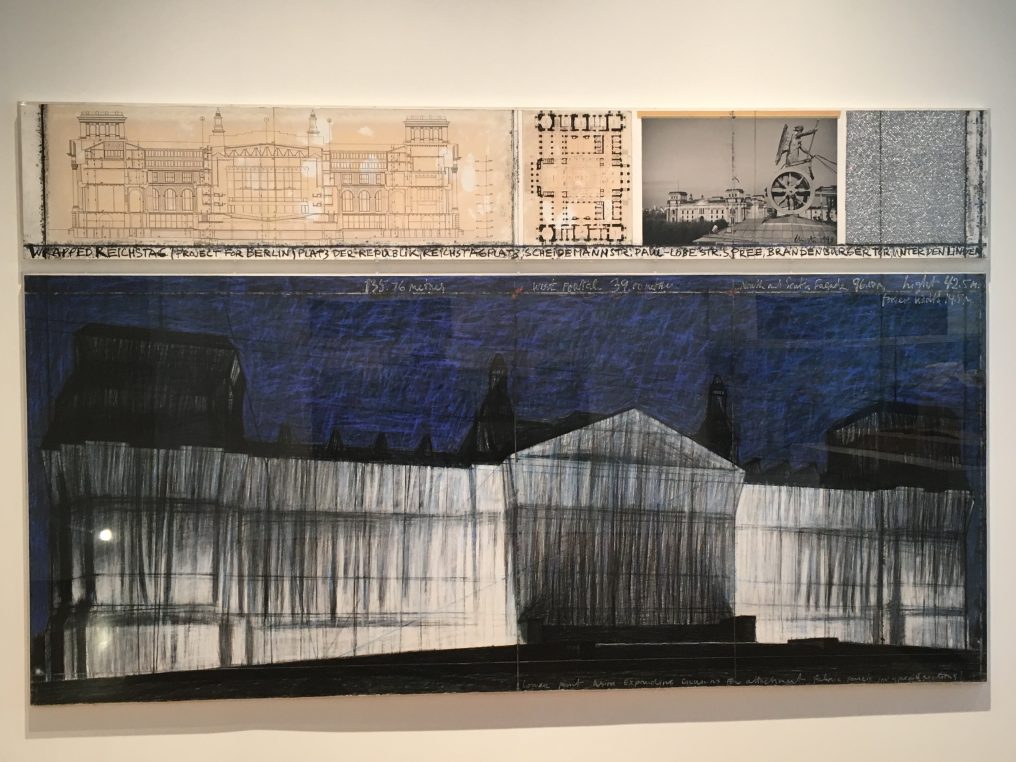 The Gates in New York were shown in  another beautiful room and the Biscayne Bay, Greater Miami « Surrounded islands » also. But I especially liked the little collages like « Curtains for la Rotonda (Project for Milano) 1978 where curtains in fabric stick out from the monument. Also the wrapped Ponte San Angelo in Rome, in 1969, a prefiguration of the Pont Neuf project and Wrapped walk ways in St Stepehn’s green park in Dublin. 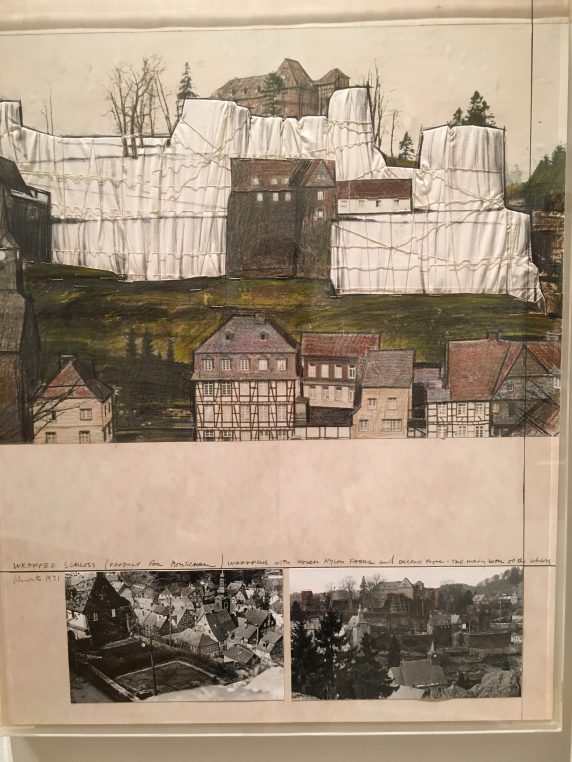 I discovered for the first time the “Champs Elysées wrapped trees” projects and met Denise Durand Ruel who lent a large drawing. She knows Christo since 1961 in Paris.  Everyone was excited for there were so may souvenirs and shared moments with the artist for each faithful collector. 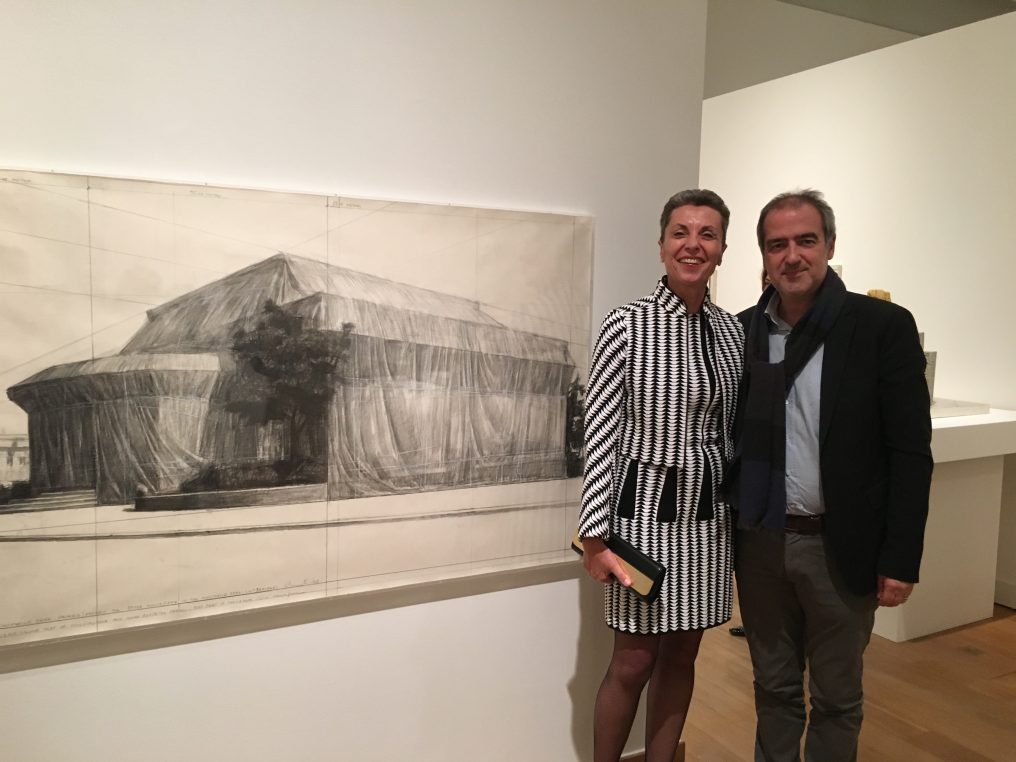 Laure Martin-Poulet, curator of the show with Philippe Jaumain, head of art sponsoring at ING in front of the Project for the Wrapped Kunsthalle, Bern, 1968

The exhibition goes on till February 25, 2018 and I cannot recommend you enough to go to Brussels to see it. It is elegant and intimate, but mostly the large drawings show what a fantastic artist Christo is. His wife Jeanne Claude always worked closely with him and she was very much missed.

2 Comments on “Christo reigns over Brussels”