One needed all the energy of Laure Martin, a long time friend of Christo’s and an art consultant, to get a little group of Toulouse art lovers into the Iseo project this past week. We are in Northern Italy, 90 minutes north of Milano, and not too far from lake Cuomo. The countryside is already mountainous and the lovely little island of Monte Isola, is the highest in altitude in Europe. For the first time in its history, it is connected to the main land by a 1 km long orange pathway, orange like Jeanne Claude’s hair, Christo’s dear wife, who passed away seven years ago. We are facing the Floating Piers, Christo’s latest project, which allowed over a million visitors in 16 days, to walk on water. The seventy five thousands visitors a day who flocked to the project, literally blocked the whole area and hundreds of police officers were monitoring the little road which is the only access to Sulzano, the village in which starts the three km walk. Cars were forced to park miles away and one had to use shuttles, no one without a red pass was allowed in town. Taxis were highly recommended. The key to success was to have a reservation at the Rivalago hotel, facing the project.

From Milan airport and after a stop at the Prada foundation, a brewery redesigned by Rem Koolhas, we finally arrived on the beautiful lake and it felt like having conquered the Holy Graal. Isola di San Paolo belongs to the Beretta family, whose company exists since 1526

The main hotel, Rivalago, is Christo’s base for press meetings and this is where he stations the barge with which he built the piers. As we board the boat for our sunset tour of the bay, he explains in great detail, the technical side of the operation, which obviously fascinates him. The 16m$ budget, the over forty years in the planning (a first attempt was made for Rio Plata in Argentina, a second one in Japan, both were rejected) have led to a huge success. 190 anchors each weighing 5,5 tons, are holding down the platform of 220 000 high density polyethylene cubes, covered with 100 000 square meters of shimmering yellow fabric. 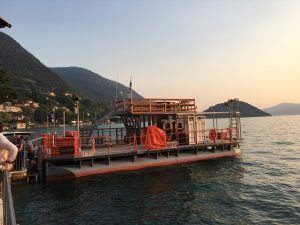 The lake is very deep (250 m in some parts) and the underwater divers from Marseille and Bulgaria, Christo’s birth country, worked ahead of the project to ensure complete stability.  The security of the public is very well enforced with firemen’s boats and carabinieri motor scooters, constantly running along the walk. A variety of curious boat owners also came along to celebrate.

Christo compares the project to an iceberg of which you only see 10 per cent on the surface. What is underneath is his personal pride. Laure Martin, the good fairy who managed to get us in!

Then he tells us of his and Jeanne Claude’s love of Italy and of this particular lake of Iseo, where he came many times, the fabulous help he received locally from officials and private land owners, especially the Beretta family who owns Isola di San Paolo, for the first time accessible by foot.

There are currently 1 000 staff maintaining the walk, which had to be closed at night for maintenance because of the affluence. Cleaning and repairing is a constant duty and the calm and kindness with which all workers operate, matches the artist’s gentleness. 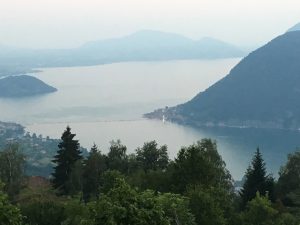 A view from restaurant my room at Hotel Orazio

Christo expresses himself in English but speaks good French. I sat on the boat next to a quiet man who happened to be his older brother by 5 years, Anani Yavachev, who pursued a career as a famous actor in Bulgaria, their birth-country. His son, Vladimir, is Christo’s project manager.

After being cheered by the crowds who have learned to recognize his boat, he smiles with visible joy: « for the first time these people walk for the simple pleasure of walking not for shopping! », he says. And they walk on water… The installation of the fabric, photo Laure Martin

When we are back on the shore, we get to see the beautiful drawings he made for the project. They are selling fast but might not recover the money, he personally spent to finance the Iseo project.

At 81, he has achieved, with his wife Jeanne Claude in mind, another fabulous art project. The next day, at dawn, we walked on the Floating Piers and I had the sensation of sea sickness while the cubes were slightly moving. It is 16 meters wide and declines slightly in the water on the edges. There are no handrails, « no parapets » as Christo tells us: “This would have been impossible to organize, anywhere but in Italy”.

What fascinated me was the popular attraction it has become : not at all a fashionista’s event. We are not at the Basel art fair with pretentious collectors lecturing on art.

This is a mostly Italian feast with children and grandmothers in wheel chairs and Angelo, the taxi driver who brought me back to the airport, was so happy. He had loved so much driving Christo’s entourage, back and forth for the last 8 months. His whole family had come to visit and this world size event made him proud of his country. Iseo is now on the Map! The crowds of Italians were cheering Christo standing on the cloth in nylon polyamide, made in Germany by the same company as that of  the Wrapped Reichstag and the Gates

When we toured on the barge, the crowds were cheering the artist as if he were the Queen of England or the Pope, and there was a real feeling of generosity and achievement. The local press writes about him everyday, and he spends his time showing the project to friends who have come from all over the world.

We had dinner on top of the mountain at trattoria Portole with a group of policemen who were celebrating and we could see the project lit at night. And then again, the next day, from mid mountain in the stifling heat. Every time the views were stunning and surprising.

Like in New York for the Gates in 2005, visitors were given swatches of the orange cloth to take home. Watching the removal of the project in a week’s time (after July 6 th) might be another fascinating moment. Two weeks is so short for a fourty five year event in the planning!

I am immensely grateful for having been able to live this moment. And then in the middle of this magical time, we learned of the success of the Brexit!