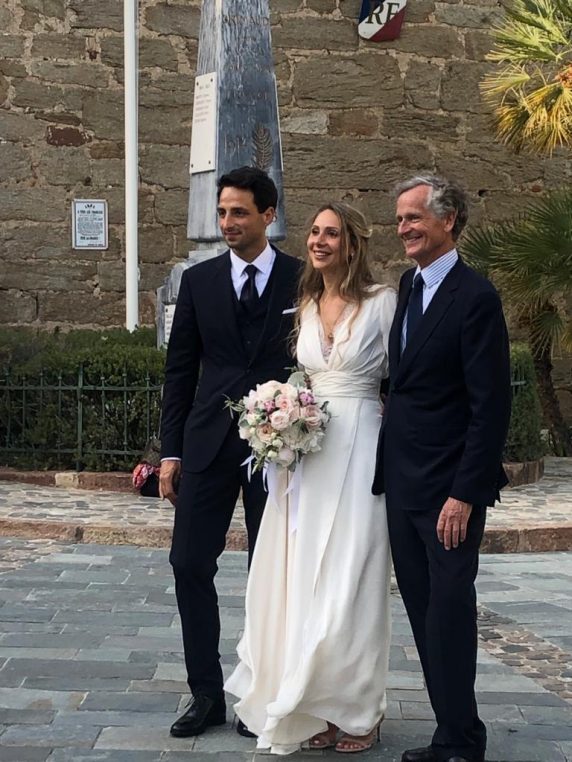 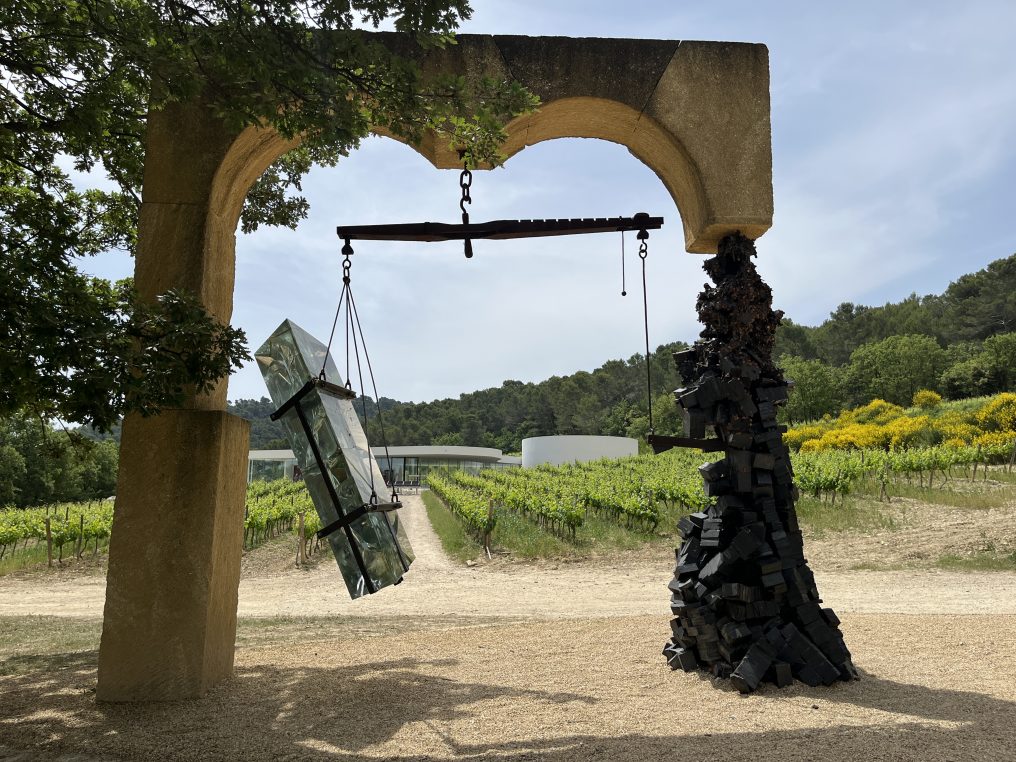 Tunga, “Portals Psicopompos”, 2011 with the new Oscar Niemeyer building in the back with Château La Coste vineyards

I was lured to Provence by a series of beautiful events, Jean Luce Huré‘s exhibition of fashion photography in Bargemon and a glorious Greek orthodox wedding in Grimaud. Both were very successful and charming and there was much more to be expected. A great golf game at Beauvallon with the young pro Benjamin Reinarz and the visit of Château La Coste, the contemporary art and architecture park near Aix-en-Provence. 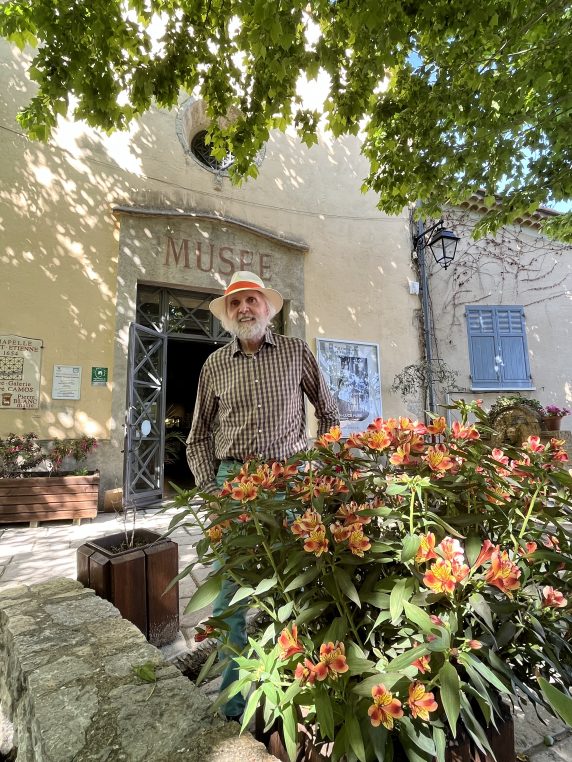 Some of you might remember Jean Luce Huré, the photographer who, for forty years, covered all the fashion shows in Paris for the Los Angeles Times and the New York Times and social events for French Vogue. He is showing in his village, Bargemon, near Draguignan, some extraordinary pictures of Thierry Mugler, Yves Saint Laurent, Jean Paul Gaultier, Pierre Cardin and Karl Lagerfeld, when they were young, in the 1970’s and 80’s. The charming venue is the old chapel Saint Etienne which dates from the XI th century and used to house the Black Penitents in the 17 th century. The cultural center is named after Honoré Camos the Provençal painter who lived in Bargemon. 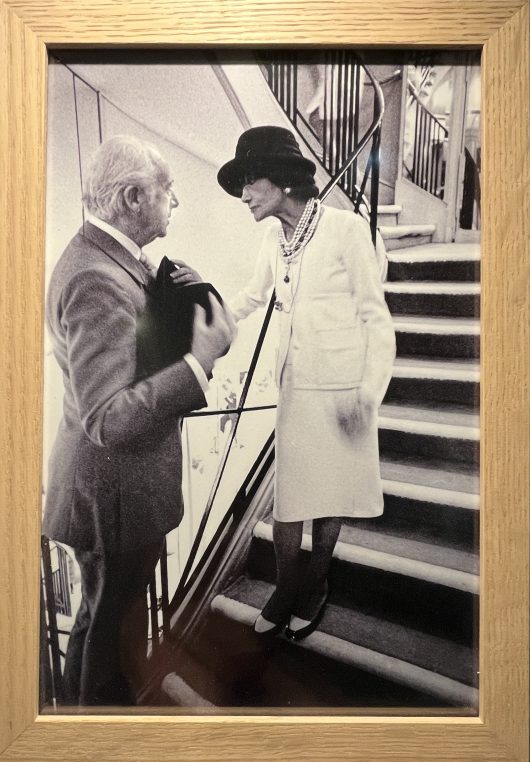 There is an extraordinary picture of Pierre Cardin who looks like a feline leaning on an armchair of his design. Saint Laurent and Givenchy in their white shirts in the studio, Alexander McQueen on a trottinette at the end of his show in 2000, Thierry Mugler and his cyborg model, Jo Marie Krasevich. Karl Lagerfeld wearing a thick beard in 1975, Marie Hélène de Rothschild on first row at the Saint Laurent défilé in 1973… Jean Luce Huré started his career in 1962 with Paris-Presse, a daily newspaper, who published his first picture of Louis Amstrong at the Olympia. The musician had refused to be photographed until this very young 20 year old photographer knocked on his door backstage… this started Huré’s career. 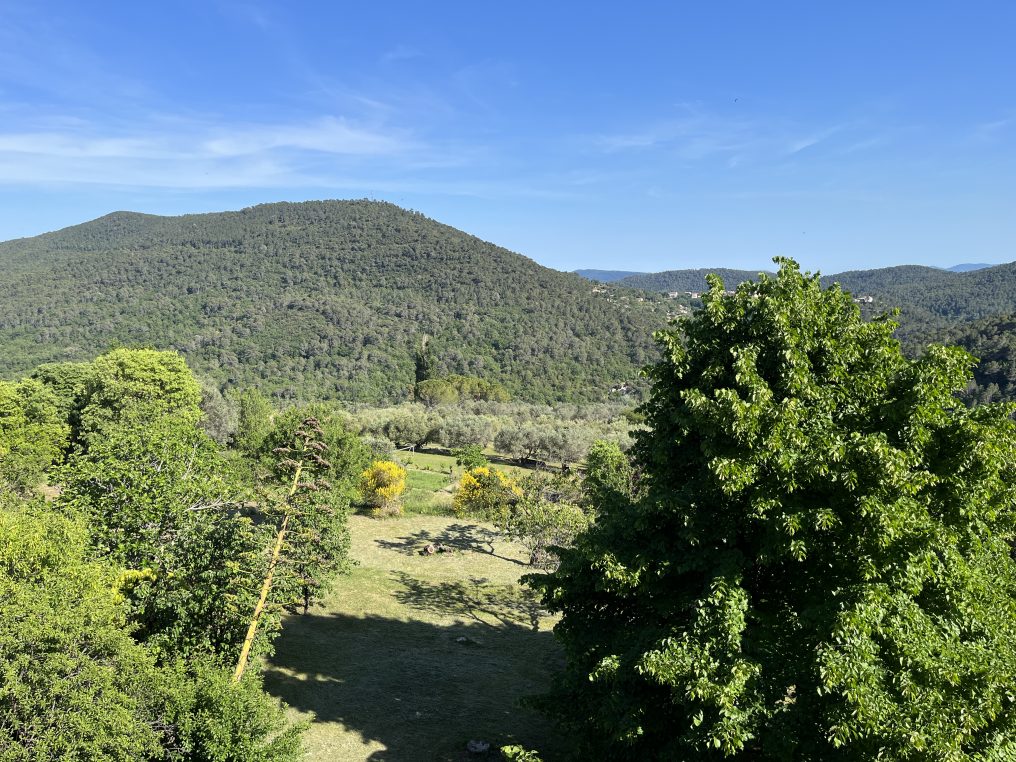 The views from Bargemon are unique

The road up to the village is beautiful and one can wander around Claviers and other parts of this very wild area. Down to Beauvallon next, where I played with Shelley and Benjamin Reinarz on their beautiful golf course which has changed dramatically in the last ten years and has the most well kept greens and views of Golfe de Saint Tropez. It was a true dream. 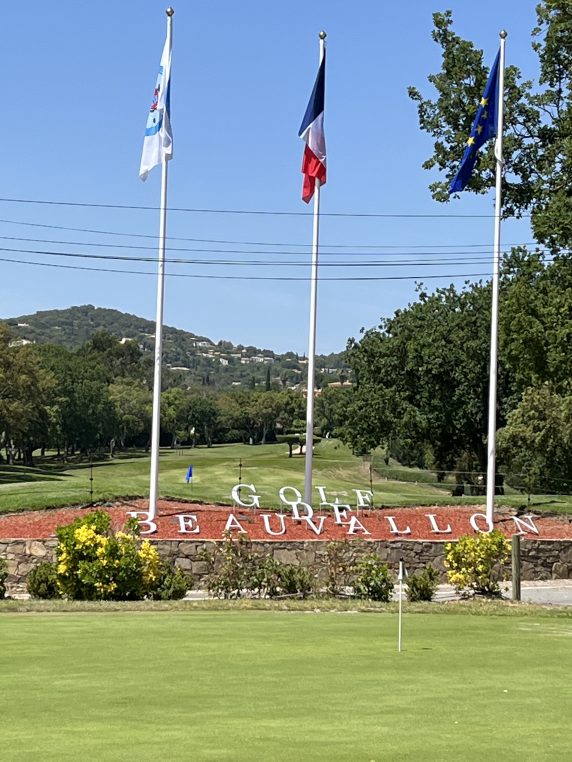 Everything was pleasant about playing Beauvallon. The super welcome by Jade at the front desk, the beautiful Honma clubs with which I played better than ever, the company of Benjamin Reinarz and his mother Shelley, who runs the ladies’ teams. It was funny to find out at the wedding the next day in Grimaud that the pretty and young deputy mayor, Anne Kiss, is a good golfer besides being a successful chemist. Since she is also in charge of tourism for this well preserved Renaissance village, she was happy to see all the beautiful Greeks and Italians at Elena Robin Marieton’s wedding to Donato Tagliente. 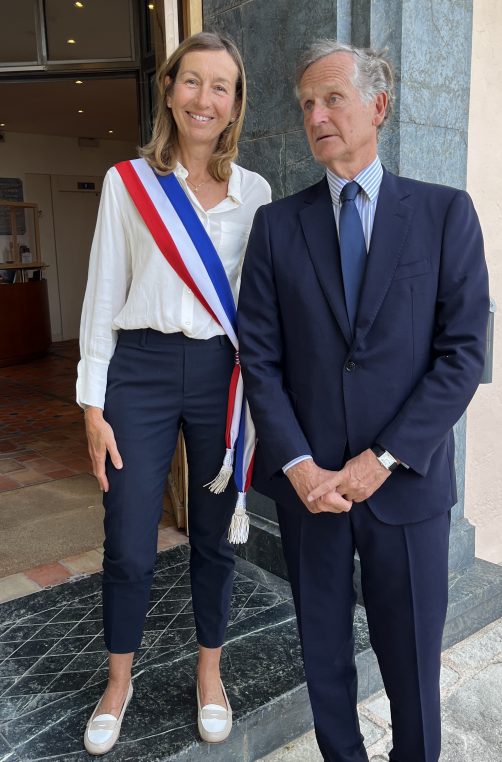 The deputy mayor, Anne Kiss, and the father of the bride, Olivier Robin Marieton

The weather was of course perfect with just a little breeze at the 4 o’clock civil ceremony in the town hall of Grimaud and the view over the whole area was magical. The mayor could not stop talking about how in love the couple seemed to be and, at the end of the ceremony, she gave them two books: one to the bride, on the history of Grimaud where the arcades of rue des Templiers date from the 16 th century and a Provençal cookbook for Donato, as a discreet feminist gesture. A perfect idea since he is a wonderful cook. 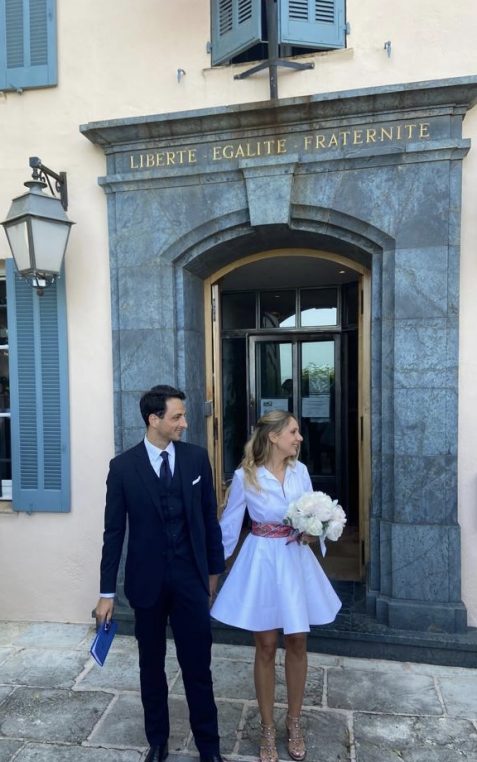 While the bride was changing into her wonderful long dress designed by Camille de Dampierre, the guests enjoyed a glass of champagne on the terrace which is adjacent to the XII th century granit church of Saint Michel. There, a beautiful fresco over the altar kept my eyes busy while the orthodox ceremony was taking place with the coronation of the bride and groom and while the deep voice of the pope sang in Greek. 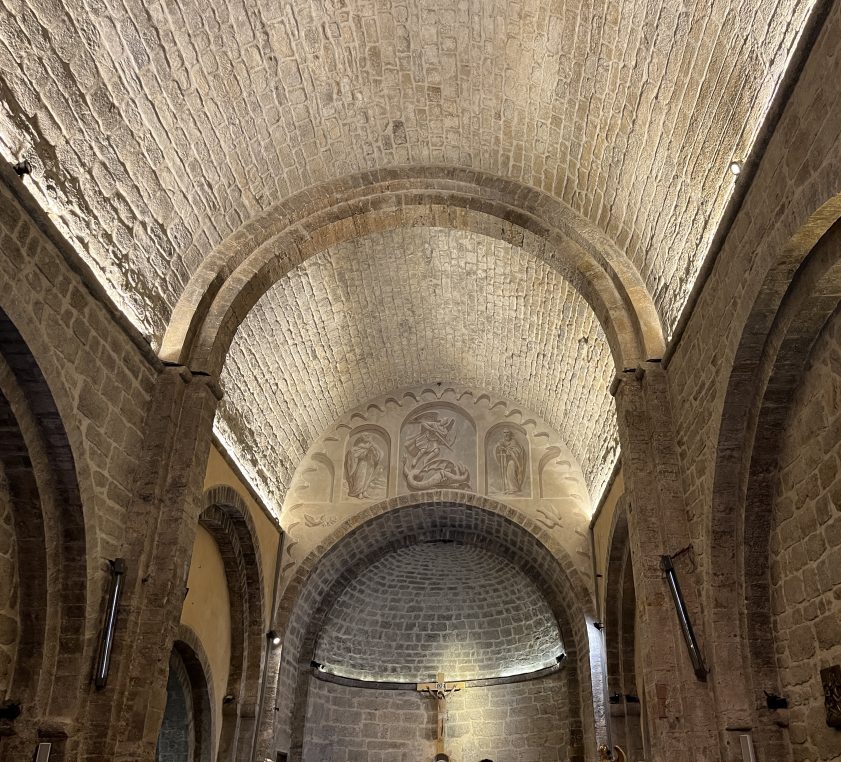 The crowd of very young and handsome friends from medical school which Elena attended in Paris, and from Athens, was a great boost for everyone in these depressing electoral times. Dinner at the glamorous vineyard of Château Saint Maur just below Grimaud, was preceded by a spontaneous dance outside on the lawn in divine temperatures and at sunset. The Roederer champagne served in magnums, competed with the Aperol cocktails. The menu of Aubergines greek style followed by Veal Rossini with foie gras and truffles in the mashed potatoes was excellent. The star wine of the evening was definitely Gevray-Chambertin from Domaine P. Gelin 2017 (a nice change from rosé)  which I particularly enjoyed… It was a tribute to the bride’s grandmother’s Burgundy origins.

The evening went on late into the early hours with dancing inside the Château St Maur and the mother of the bride, Maria Robin Marieton, was dressed like a Greek diva onstage. It is rare to attend a wedding where everyone is happy, and especially in France where one family always criticizes the other… There, the osmosis was total and the Greeks who had not traveled for three years were happy to discover the Saint Tropez area while the French were delighted to make new friends in this enchanted country. 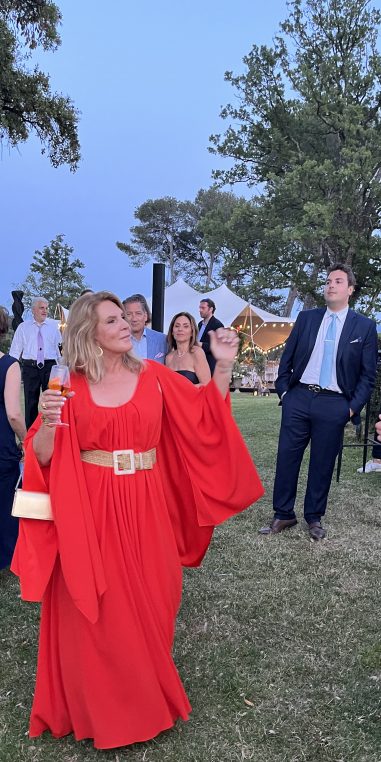 Maria Robin Marieton was dressed like a diva on stage

The next day I drove north to Le Puy Sainte Réparade where Patrick McKillen, the Irish owner of Château La Coste, has transformed an antique vineyard into a fabulous architecture and sculpture park with exhibition galleries by Tadao Ando, Richard Rogers, Renzo Piano, Oscar Niemeyer, cellars by Jean Nouvel and a theater by Frank Gehry. Major artists such as Andy Goldsworthy, Kengo Kuma, Jean Michel Othoniel and Richard Long, have pieces on the property. Hiroshi Sugimoto and Louise Bourgeois each have a sculpture on a water basin by the art center. One discovers each piece by accident behind a bush or at the turn of a path. The art is not staged and this is wonderful! 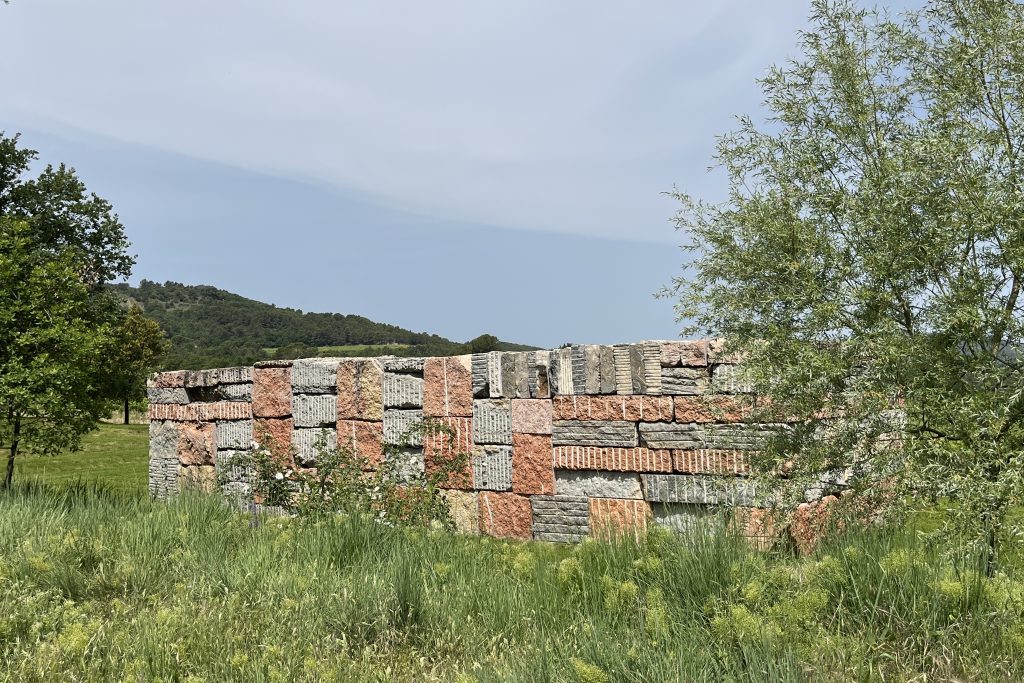 You have to bring good shoes and go early in the day (it opens at 10 am) if you want to see the whole park without suffocating in the summer heat. Pick nicks are not allowed and you are strongly encouraged to bring water with you. It takes approximately three hours to wander around, but there are three restaurants, a tea house and a wine tasting place if you want to rest for a bit.  The  123 has of vineyards include seven different types of grapes, from Cabernet Sauvignon to Cinsaut for rosé. I had not gone since the opening in 2011 and was fascinated by the extension of new buildings, which remain invisible until you reach them. The whole park is 220 has (500 acres) wide. 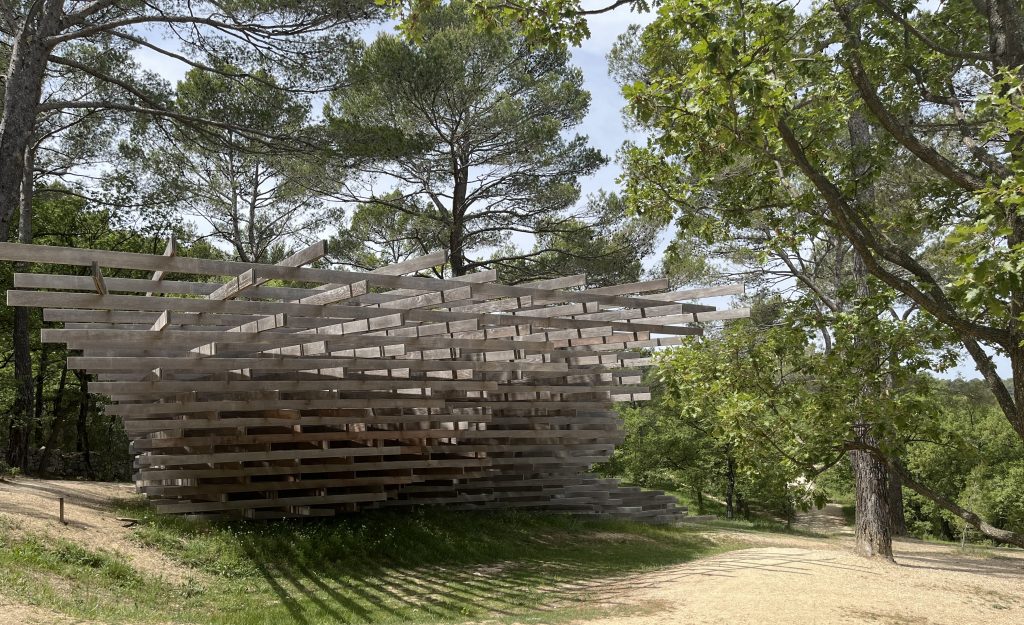 At the moment an exhibition of Bob Dylan’s paintings takes place in Richard Rogers’ art gallery (2021) which hangs above a hill and also in the 2017 Renzo Piano’s pavilion, at the other end of the site. The three arches  by Tunga are great entrance gates to different paths. We saw Ai Wei Wei’s “Ruyi Path” made in 2017. I was quite impressed at how McKillen managed to get the most important architects alive (except maybe I.M.Pei) to each do a building. And also by the kindness of the welcome by young art students who all seem to be having fun. 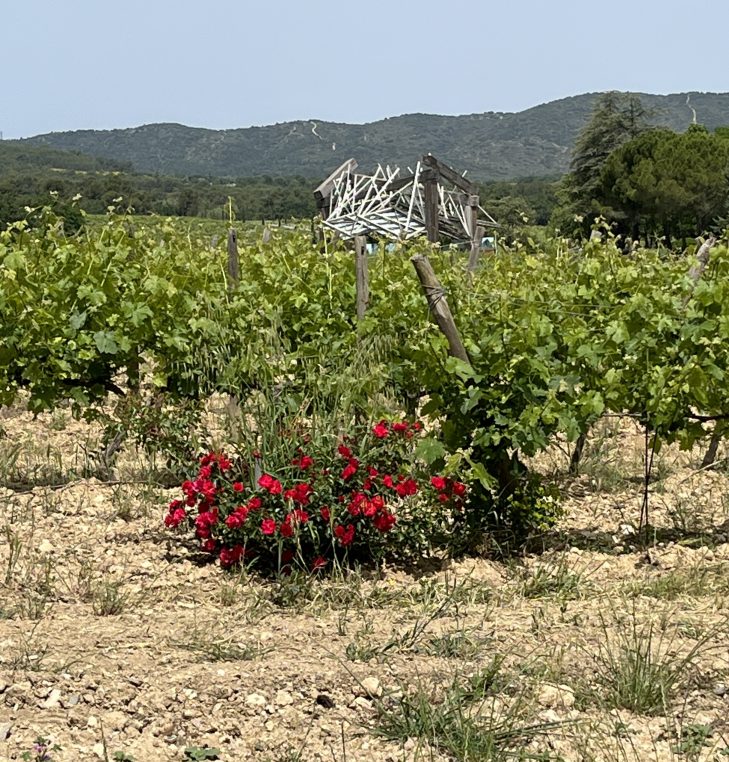 There are constantly concerts in the theater and new shows opening all summer. It is definitely a place to visit and you can also stay in the hotel La Villa on the premises. If you wish to rent a golf cart to wander around you have to book a week ahead.

4 Comments on “Couture photography, a Franco Greek wedding, golf and art in Provence”