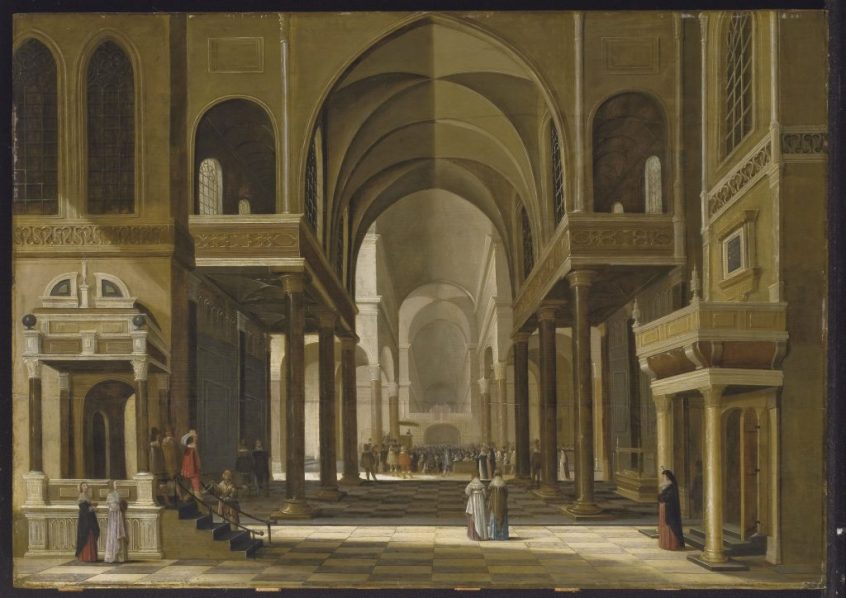 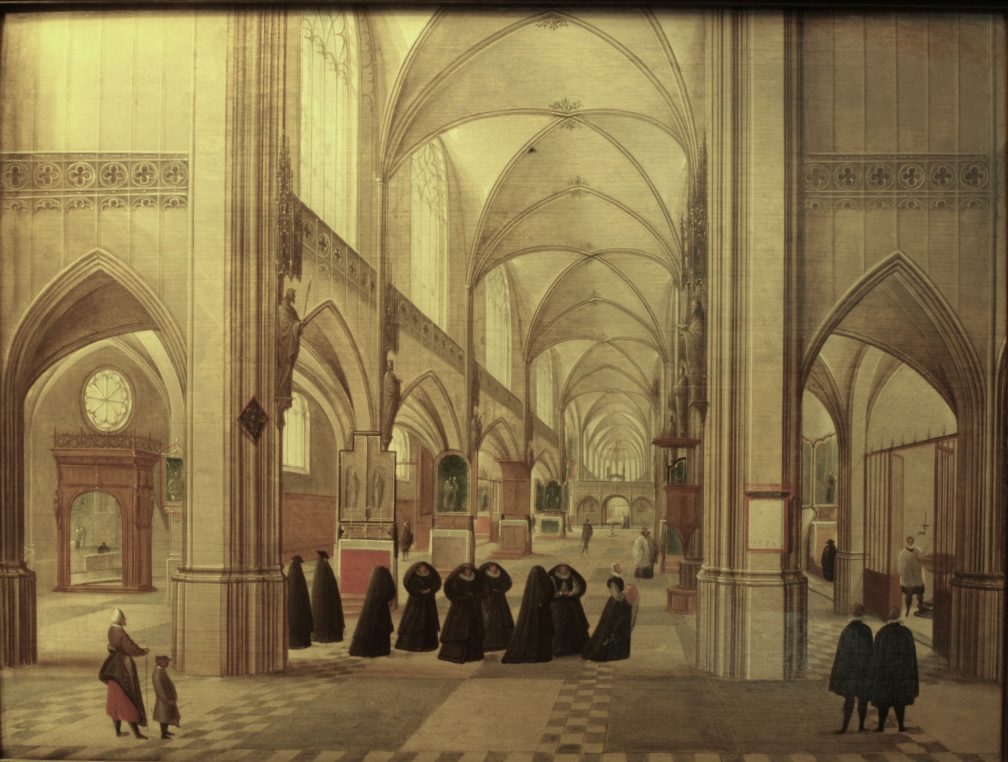 Abel Grimmer, “Interior of a cathedral with a mass for churching (relevailles) of a young mother”, 1589

After my successful tour of Brittany I decided to join a friend in Abbeville and explore the multiple museums of the north. Lille is well known for its Arts Museum and diverse peripheral curiosities like Robert Mallet Stevens’ Villa Cavrois,  La Piscine in Roubaix and Villeneuve d’Ascq’s Museum of Modern Art. But I have a weakness for Cassel, a little known town near the Belgian border, where big battles were won by Louis XIV and Napoléon. The pretty village sits on a hill with a view over the whole agricultural area. Wheat was being harvested and part of the joy on the road was to be stuck behind a moissonneuse-batteuse (combine harvester) and share the slow life of farmers. 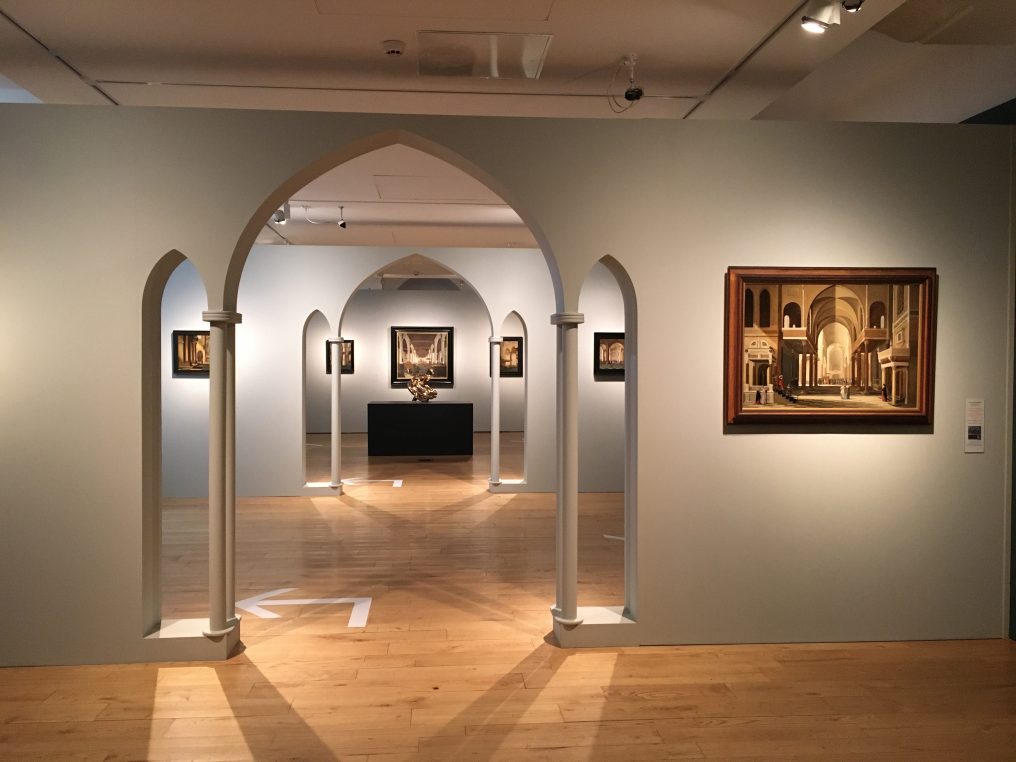 A view of the very pretty scenography in Musée de Flandre

Some years ago I discovered a XVII th century painter Gaspar de Crayer at Musée de Flandre in Cassel and this perfect small museum has remained on my mind ever since. It is far to reach but there is a good hotel next door. This time, the exhibition was of a private collection of “Sacred architecture”, interior church paintings, made between 1570 and 1700, in the Flanders. It could sound repetitious to see churches one after the other, but the staging of the exhibition is so charming and the quality of the works so perfect, that the visit is a pure pleasure. 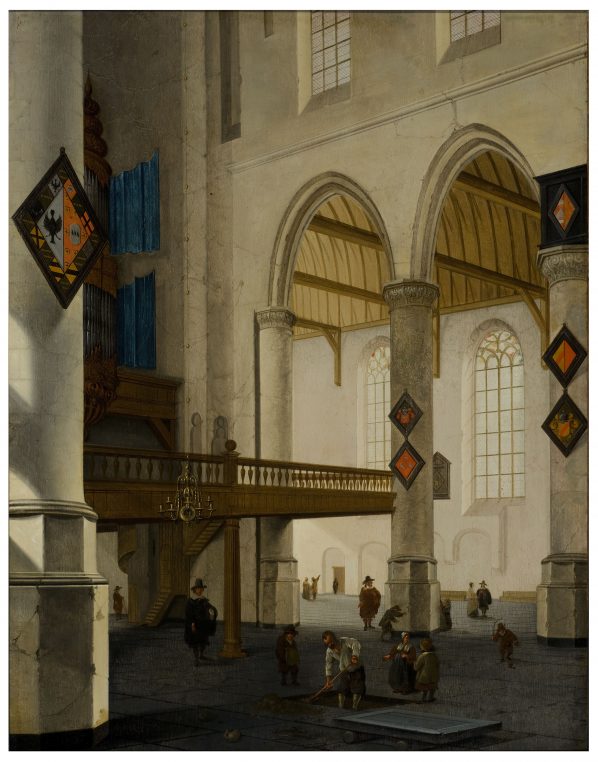 Cornelis de Man, “View from the balcony of an organ in the Old Church of Delft”

The collection of fifty works, was started in the 1970’s in London with a small painting by Pieter Neefs. The eighty year old (willingly anonymous) collector, who once dreamed of becoming an architect, bought it instinctively and still loves talking about this moment. His passion for painters from the  North started at Petit Palais in Paris while living with his wife in a modest apartment and working hard. They spent their holidays visiting churches all around France and museums in Germany, the Netherlands and Belgium, taking pictures and cataloguing their favorite works in a virtual museum. 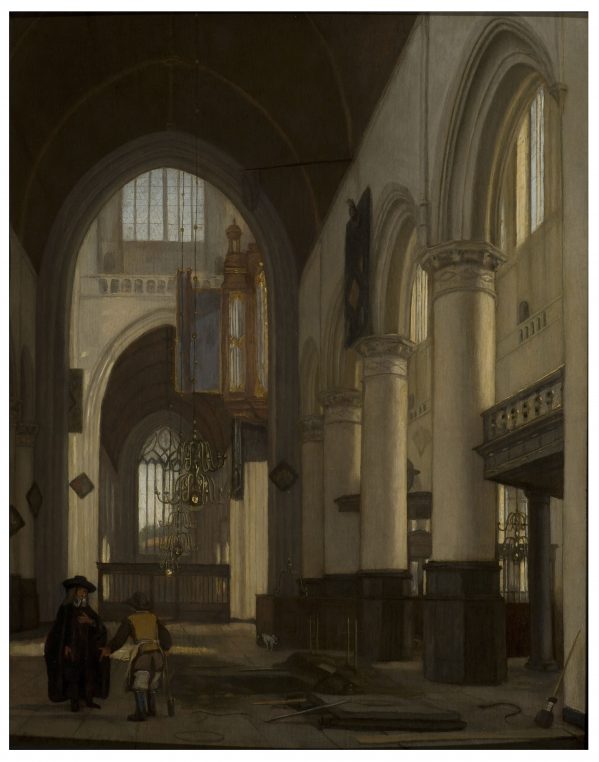 Emmanuel de Witte, “Interior of an old church in Amsterdam with a gravedigger”, 1678

These architecture paintings are full of details and one discovers an intense social life in these very strict protestant interiors, where some people were buried. A dog is caught peeing while a gravedigger is at work in a church in Amsterdam, ladies walk around with their children and dogs in Antwerp, couples chat while mass is being celebrated in a side chapel. All these works are very fun to look at even though the decors are austere.

There are two sculptures by Belgian artist Wim Delvoye, which are devoted to Christ on the Cross and Gothic architecture of the cathedrals, the astonishing Nautilus Penta in corten steel. They provide an interesting and glittering breathing moment in the dark rooms of the show.

Pieter Neefs is probably the most prolific of all painters at the time with over 400 works of sacred interiors, of churches with three, five or seven naves, which were shipped all over Europe. He is well represented in the collection.  Pieter Sanredam also, who was a friend of Jacob van Campen, the architect of the Mauritshuis in the Hague, was nicknamed the “portraitist of churches”. 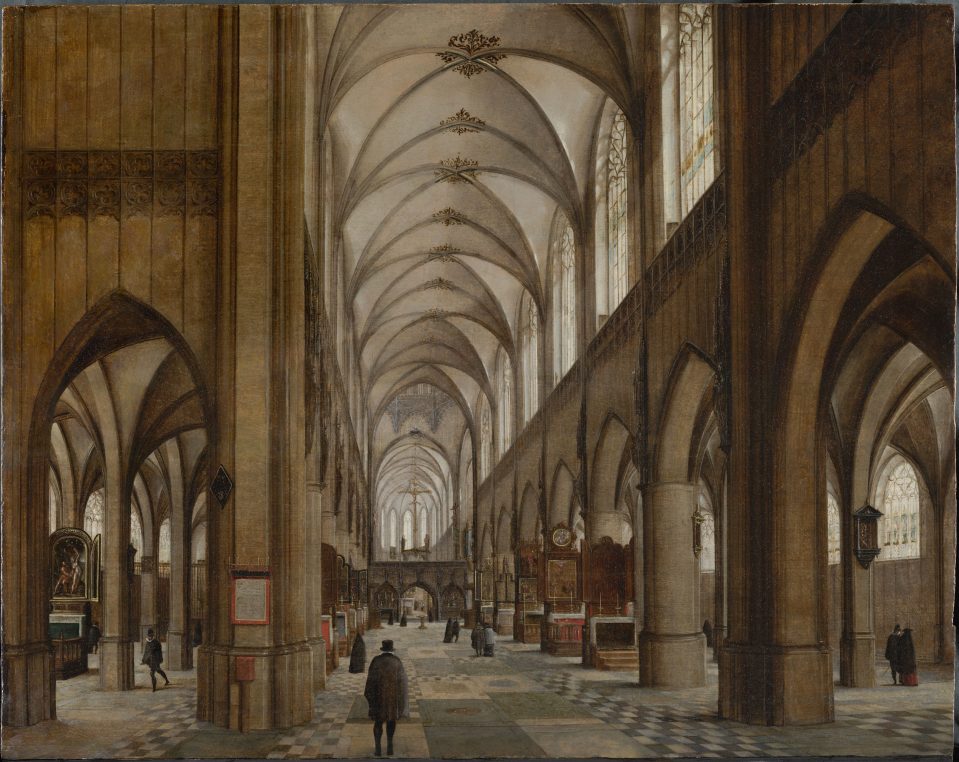 Hendrik van Steenwijck I, Interior of a gothic cathedral

The Musée de Flandre has a fascinating permanent collection of Flemish paintings some of them very burlesque, of games and decors including some by contemporary artists. It is open every day except Mondays.

2 Comments on “Driving North into Flanders”