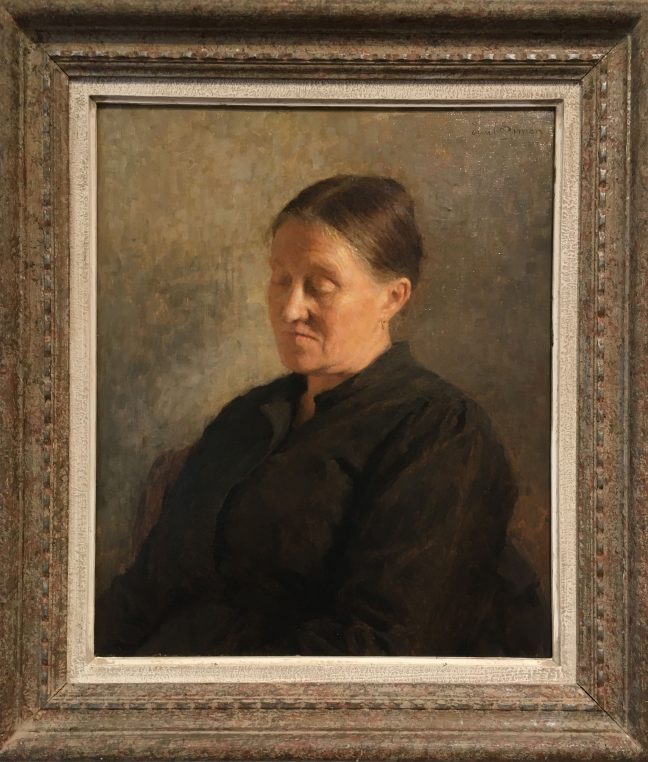 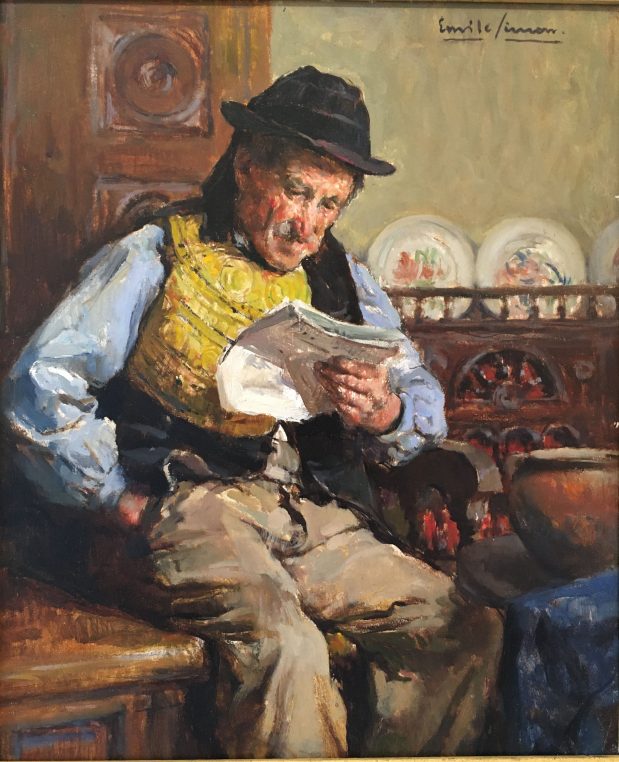 There is a famous Simon painter in Brittany and he is called Lucien. He was the object of an exhibition last year in Quimper and his family is still very present in nearby Sainte Marine where they own the semaphore. But this time, it is Emile Simon (1890-1976), a modest art professor from Rennes, winner of the Prix de Rome, and arts teacher in Cairo in 1913, who is exhibited at the delightful Musée Breton. With his student Madeleine Fié-Fieux, he developed a huge corpus of work which was never sold and is kept at Manoir de Squividan, in Clohars Fouesnant, where they lived for thirty years with her husband, a keen art lover. A Jules and Jim trio? The show in Quimper, which includes both artists, is particularly moving for the realism of all portraits. 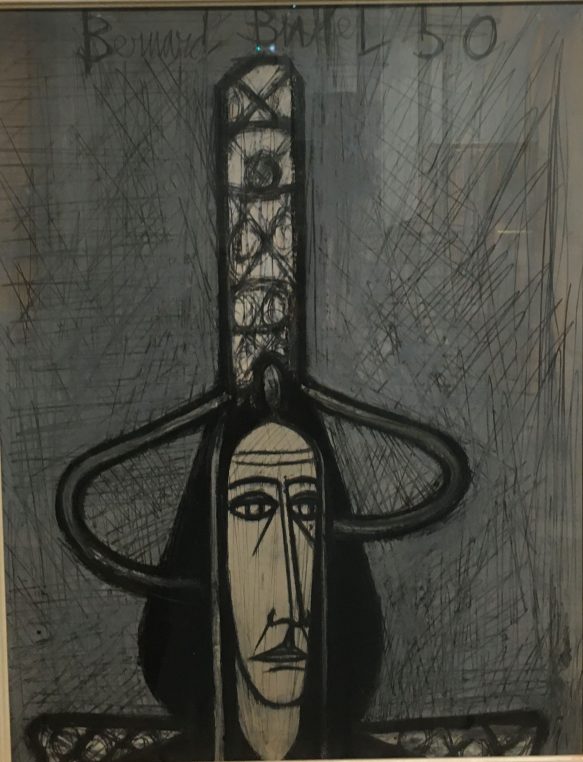 When you walk into the musuem the first rooms deal with Bigouden costumes and coiffes. And the first painting I noticed was by Bernard Buffet, a surprising encounter! The story is interesting. Buffet was not popular at all in France among museum curators before Pierre Bergé organized a large retrospective of his works at Musée d’Art Moderne de la Ville de Paris in 2017. He was considered as too commercial because his galerist Maurice Garnier had made a huge financial success with him. When Musée Breton agreed to organize a show of Buffet’s Breton paintings in 2007, Garnier gave this coiffe to thank them. It has become one of the best modern paintings of the museum. 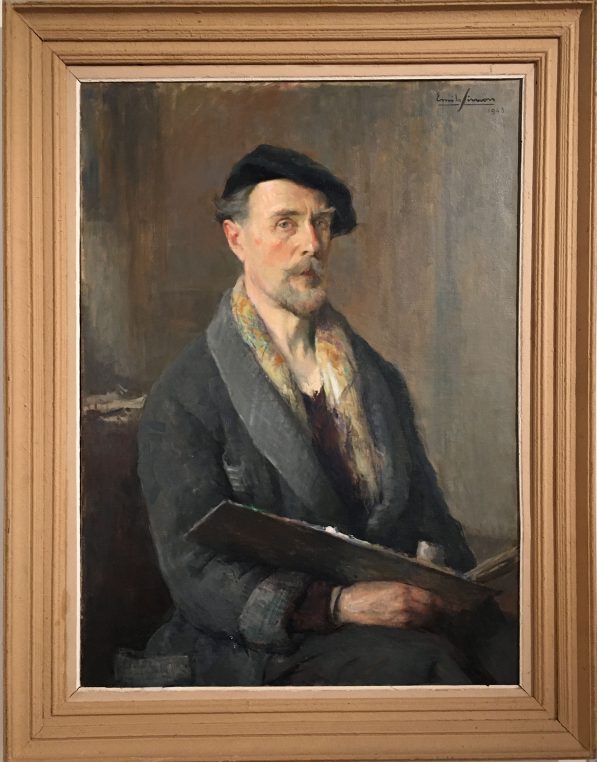 Emile Simon and Madeleine Fié-Fieux were a professional couple for many years since they met in 1930. She helped him acquire a house in Nantes when he was a penniless arts teacher, and she moved in it during the war with her husband when her own house was bombarded. They all moved North to Fouesnant in 1943, where she acquired Squividan, a large unpretentious manoir which has become home for Simon’s collection of 1336 paintings. 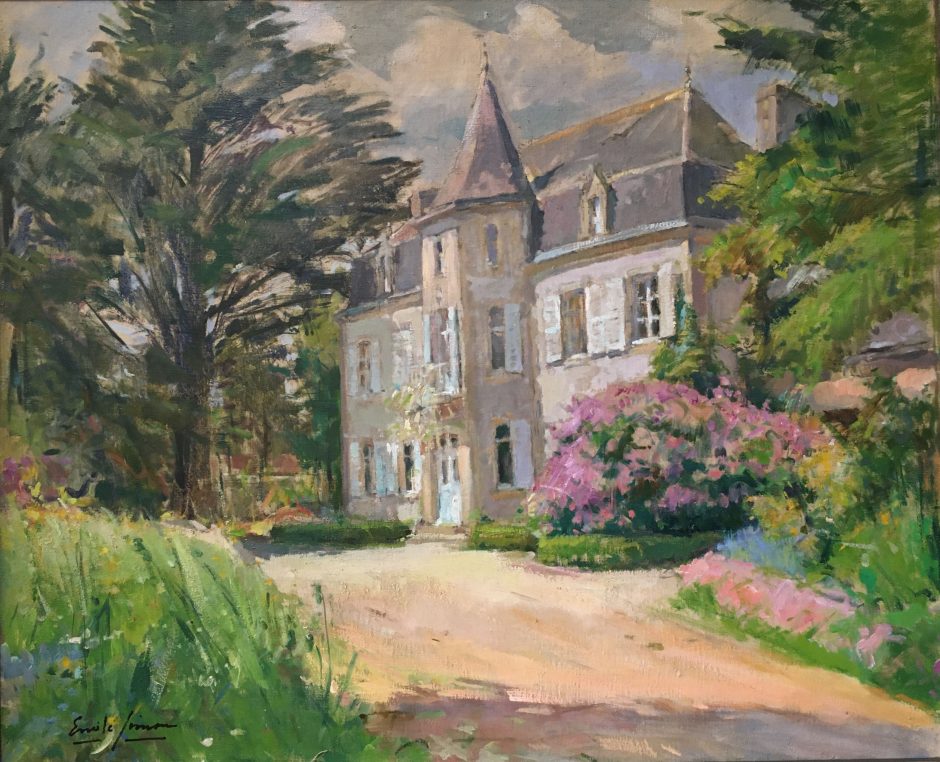 I was particularly struck in the show by the portraits of fishermen and poor farmers by both artists, whom they met during their tour of Brittany in the 30’s and 40’s. They did a serious ethnographic documentation with the description of local costumes in Finistère and Morbihan as well as farms and churches decors. Simon painted many landscapes and sea views all around Brittany in Vannes and Josselin, Camaret and Plozévet. Madeleine Fié-Fieux is particularly good at catching people’s characters because she spent hours talking to them. Like in this portrait of Père Raoul, below. When I passed the painting, a visitor from Fouesnant, started telling me that his father, a farmer, had known this man well. 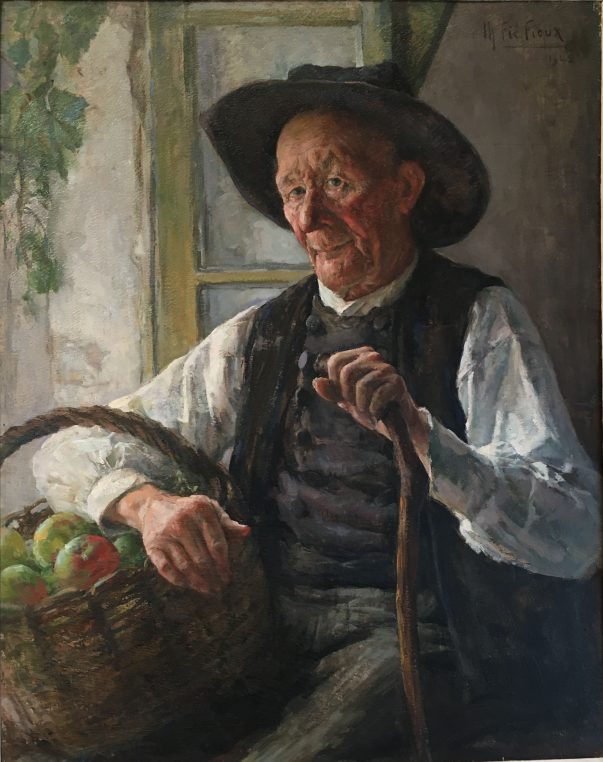 They both painted “Le Père Le Gouriellec” and the two painting hanging side by side, show their differences in style. Madeleine is more precise and detailed. Simon makes a very good portrait of Madeleine’s husband, Doctor Philippe Fieux,  in 1944. He was an avid collector and enhanced both artists’ passion for work. 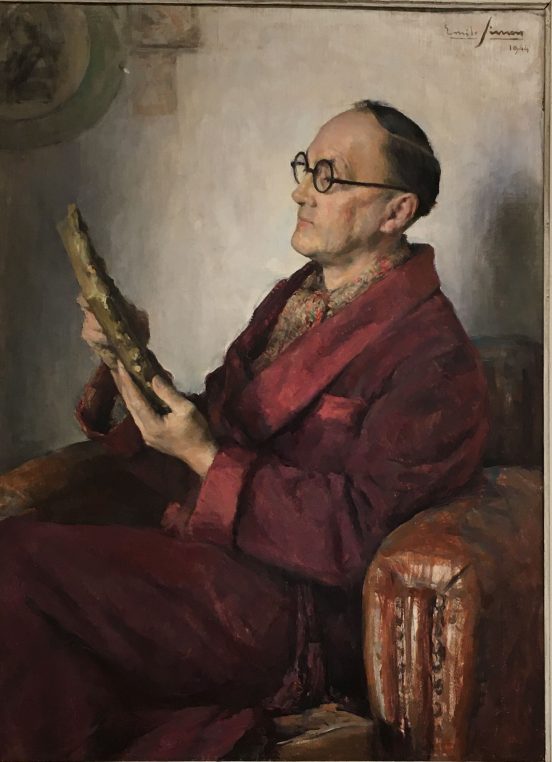 Mourning takes a large part in Breton life since sailors and fishermen are often caught in storms. Simon has a wonderful painting of an old lady in black holding a miniature boat on her knees. On imagines the long anxious waits of all these wives. In 1937, Simon used the actual mother of a fisherman who died in 1915. She is holding the ex voto of the boat, which was usually offered to the church after a shipwreck. The painting is poignant as is a depiction of “Sur le départ”, the last drink before going at war.  . 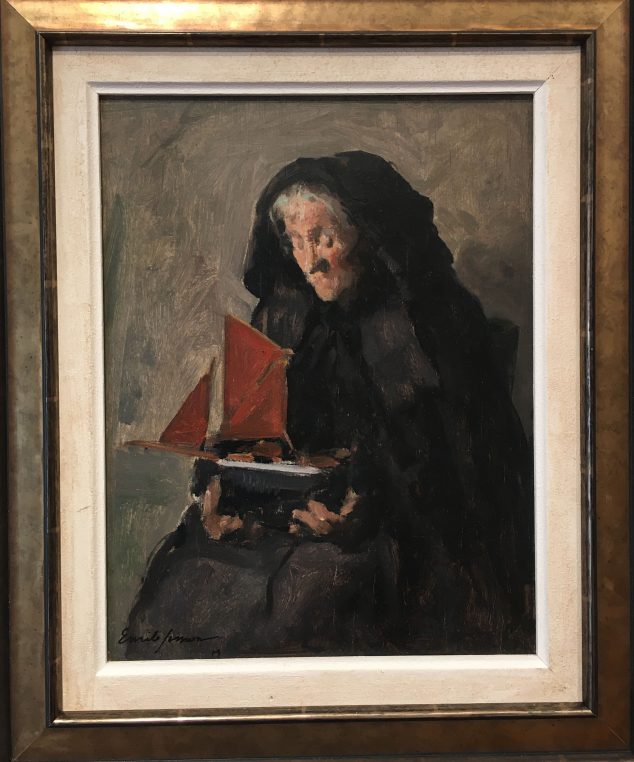 There are scenes of musicians with their bagpipes, of a baby being born upon the return of the fields, watercolors of village scenes. The whole exhibition is very moving  because each painting is true to life and death. Bretons are a strong people and it si interesting while travelling through the country to encounter such a visual testimony of who they are. 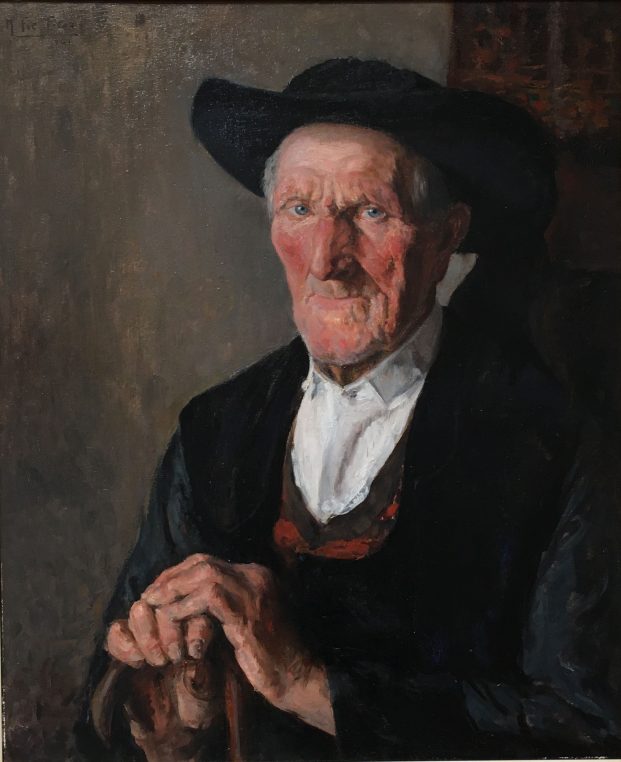 One Comment on “Emile Simon is amazing in Quimper”