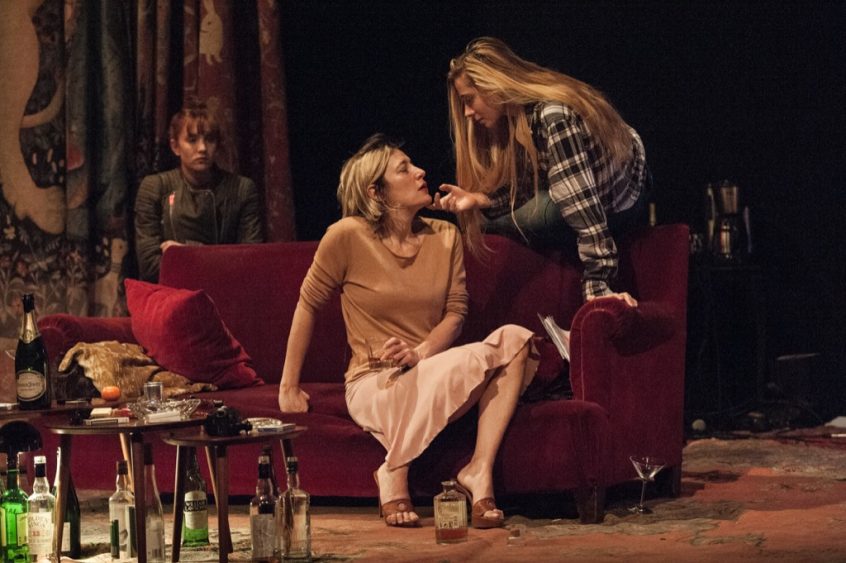 I was very excited for weeks before, at the prospect of seeing this play by Rainer Werner Fassbinder, a German cult cinematographer of the 70’s. So I asked an old friend from those years, a film producer himself, to come with me.

Hanna Schygula who was in the original film was not on stage but Valeria Bruni Tedeschi (Carla Sarkozy’s brilliant sister) is just as fantastic. « The bitter tears of Petra von Kant », the story of a dominating famous fashion designer who falls desperately in love with a very pretty nobody and never recovers from her lover leaving her, is a good story.

The all women cast of beautfiul girls creates a very special atmosphere on the small stage and in the packed audience of 336. Théâtre de l’Oeuvre is a little jewel located on rue de Clichy, the « Nouvelle Athènes » artistic quarter of Paris.

Valeria who is also a movie director (Un château en Italie, 2013) uses subtlety and violence in her acting that keep you riveted. The young and beautiful model-like bilingual actresses, Zoé Schellenberg and Kate Moran add to the exoticism of the play. They all chain smoke and drink whisky and cognac like a fish, carrying in the same hand, bottle and phone around the stage like addicts. They dress and undress on stage in a sort of frenzy quest for « I would like to find my place in the world ».

The piano serves as a bar and a lot of the action is set on sofas or lying on the floor in depressed attitudes. Except for a weird anachronism of the mother (played by Valeria’s mother) asking for 20 000 euros (not francs…) the atmosphere seems quite right to someone who lived those years including the St Laurent pants, and brownish Biba shirts.

The young Corsican director Thierry de Peretti obviously worked from photographs of a time he never knew. He cleverly uses the whole theatre as a stage, having Valeria /Petra shout from the balcony and Karine/Zoé run up the stage. Fassbinder’s depressing atmosphere is warmed up by Valeria’s Italian energy and no one ever believes that the action is set in Germany…

The two hour production feels a little long at times but the fabulous acting of the five girls (including Lolita Chammah, the slave assistant who does not utter a word…) makes it a captivating evening. 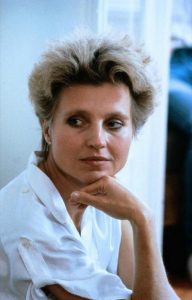 Hanna Schygulla who played Petra in 1972